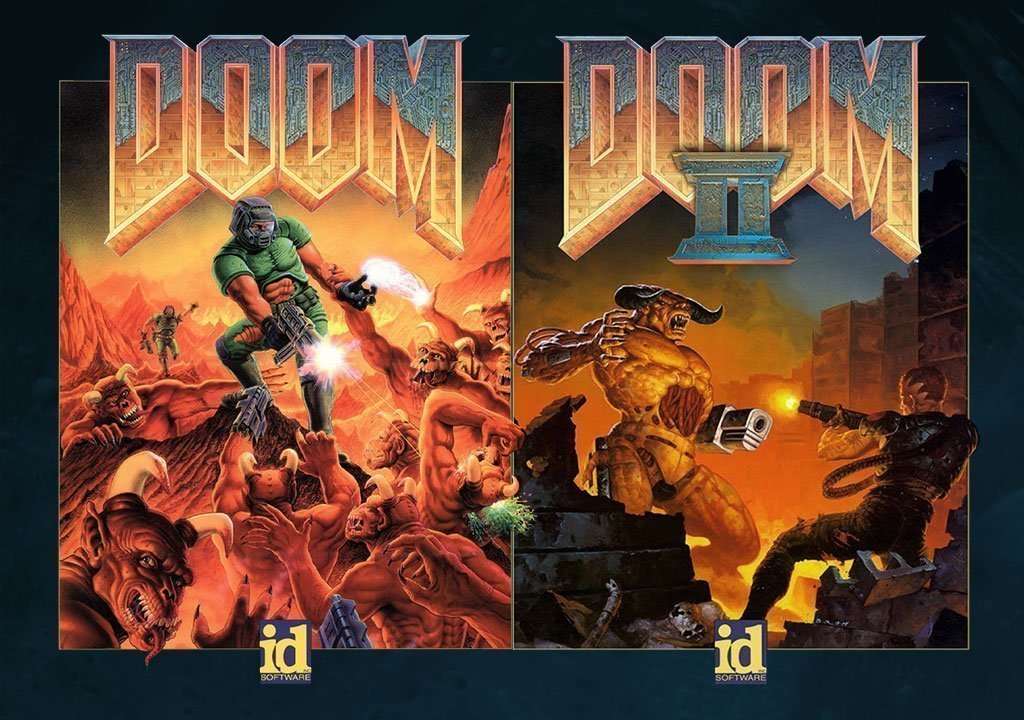 One thing you should never attempt is a week-long legacy Doom marathon. Between add-ons and level packs, there’s simply too much officially released material. I’ve done just that and my mind feels like mush. For those that might not know, Doom is one of the most successful PC games ever made. It also happens to be my next PC playthrough retro review. While Doom and Doom II are technically two separate games, they are nearly identical in design. So, like I did with my review of Wolfenstein, I’ve lumped them into one big review.

While one can consider Wolfenstein 3D to be the grandfather of modern first-person shooters, Doom is the big daddy. This was the game that put the genre on the map. Made by many of the same people responsible for Wolf, it is in many ways a spiritual successor. There are many similarities in terms of style and screen layout. However, Doom features drastically improved graphics and enemy AI.

For gamers looking to play on modern systems, I highly recommend using a program called zDoom. Many years ago, the developers of Doom released its sourcecode, which allowed independent programmers everywhere to make modern ports of the game. There are several tools out there that work very well, but you can’t go wrong with zDoom. (It supports almost every Doom-based game created, and includes support for high-resolutions). — It’s important to note that this port along with many others, also adds certain features that were not present in the original game, but these can be easily deactivated, resulting in a purist experience. Play as you will. 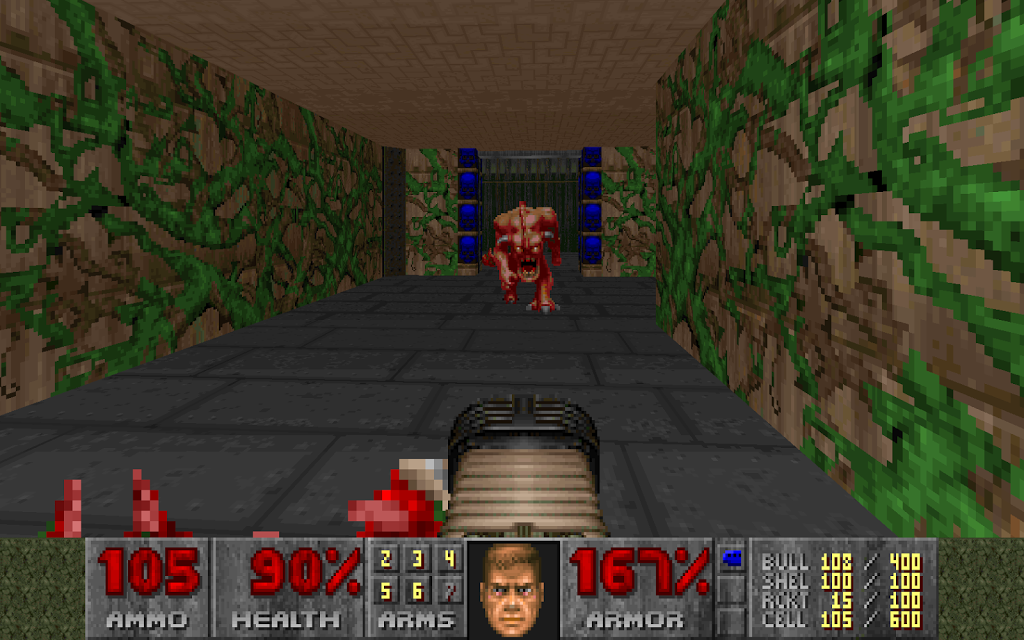 In the original game, you play as a futuristic Space Marine who is stationed on Mars. You are the soul survivor of a terrible experiment gone wrong. Scientists on the martian surface were testing a new teleportation technology when they inadvertently opened a portal to Hell itself. Nearly everyone on the base was transformed into mindless zombies. This is where the game begins. As it progresses, our hero makes his way through the complex and eventually on the the two martian moons. All the while encountering various demons and hellspawn. Eventually, the game takes you into hell itself, where upon eliminating the final boss, you find a portal that leads back to Earth. (These areas are broken up into select-able game chapters, much like Wolfenstein.)

The game was so popular that a special edition, Ultimate Doom, was released. This version includes an extra chapter, and while it doesn’t exactly fit in very well with the original story, it really displays some incredible level design. 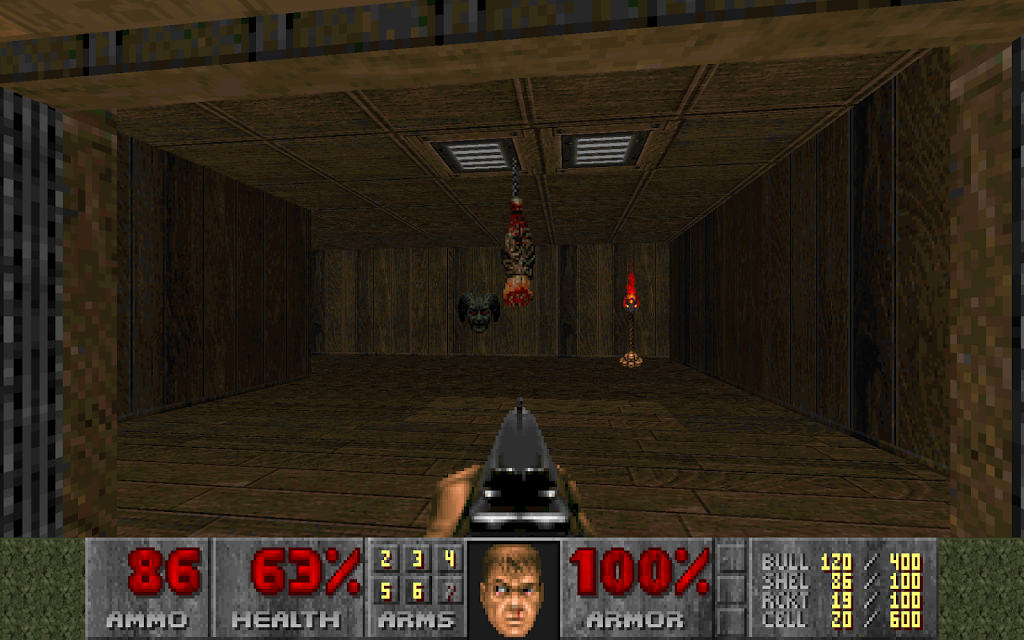 That is something that really made Doom stand apart from other games of its time. When Doom was released, players were given the ability to create custom levels for the game. This soon led to a level of customization unseen previously in computer games. Eventually, these modifications led to virtually whole new games. The mod-ability and online play catapulted Doom to be one of the most popular pieces of PC software ever. I used to play Doom with some friends from a local BBS system in the mid-90’s. And our BBS even had a custom WAD that included faces of its many members as well as audio files.

Despite its popularity, the game was wrought with controversy. Brutal violence and occult imagery led the game to be one of the most hated pieces of software at its time. Despite the protests and “burn the game” campaigns, the game was profitable enough to spawn a sequel.

Doom II was released the very next year, and while it did not include a new game-engine or any noticeable improvements in visuals, it was widely hailed a refinement to the original game. Instead of being broken up into chapters, the levels in Doom II are sequential. There are also some changes to weapons and the addition of several new enemies.

In Doom II, our hero returns to Earth only to find that the forces of Hell have also invaded this planet as well. The goal now, is to penetrate Hell’s foothold and free the surviving earthlings, all while trying to drive the demonic forces from the planet.

I found the level design in Doom II to be much more thought-out and complex. It’s clear that the developers had it down to a science at this point. Also, if you enjoy multiplayer, Doom II was the version to get. The multiplayer code was a vast improvement over the original. (These days, it’s irrelevant as modern ports routinely support internet play.) 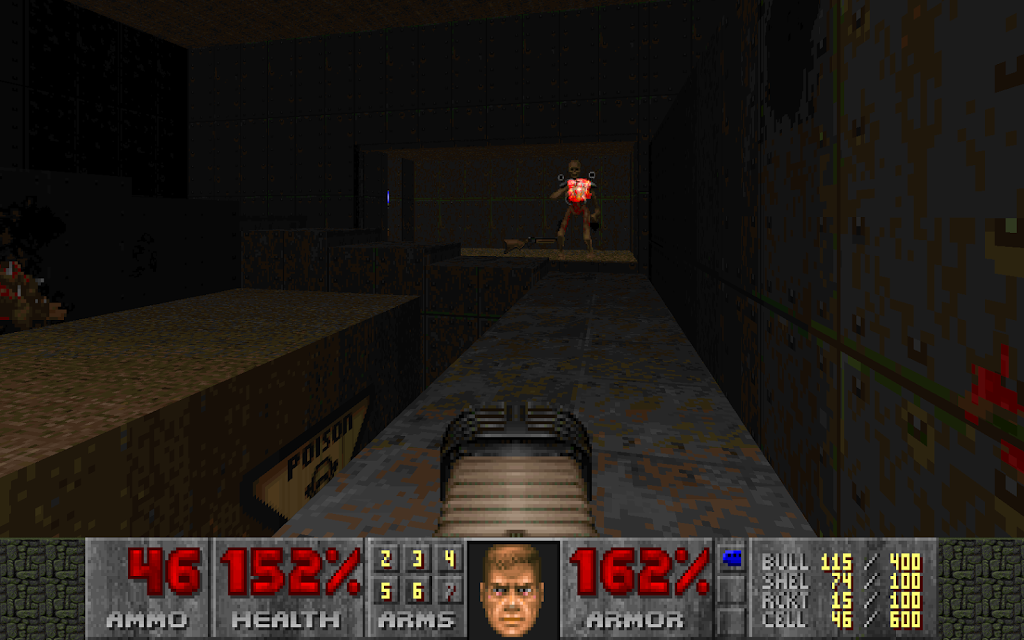 There were two official expansions to Doom II. The first is called The Master Levels. This pack features twenty-one new levels designed to be the most challenging yet. They don’t really fit in to the story line in any real way that I can see. Instead, it seems like something that was simply made for rabid fans that couldn’t get enough. This pack also features a bundle of over a thousand amateur-made levels collected from the early days of the Internet. (Yeah, I’ve not bothered with most of those…)

The second expansion is known as Final Doom. This contains over sixty new levels broken into two chapters: The Plutonia Experiment and TNT: Evilution. These chapters are actually designed with a story in mind. They represent the aftermath of the main game and our hero’s attempt to close up all the demonic portals. I founds these to be very well done and quite challenging.

It’s also worthy of note that a final optional chapter to the main Doom II game was released for the Xbox 360 version of the game. This chapter is also available on the PC as part of the Doom 3 BFG bundle… more on this later.

Now, let’s say you want to play these two games. Where does one start? Well, these titles have been made for nearly every format and console you can think of. That being said, I personally stand by the belief that these games are best experienced on the PC using a modern day frontend.

The easiest way to obtain both Ultimate Doom and Doom II, is with the purchase of the “BFG Edition” of Doom 3. This is a special bundle that includes all three titles. It is available on Steam for a pretty decent price and goes on sale quite often. It is worth mentioning though, that the version of Doom II included in the bundle is a modified version that censors some controversial content from a one of the hidden levels. (The original Doom II contains a secret Wolfenstein throwback level with some Nazi imagery).

You can even pluck the WAD files from the Steam version of the game and load them into zDoom to play the steam version with the better visuals zDoom provides. For players wishing to play Final Doom or the Master Levels…. these also load in zDoom but you’re on your own when it comes to finding copies.

All in all, my playthrough of these two games was an enjoyable trip down memory lane. Although playing thru over one-hundred-fifty levels of something in the span of a week is pretty excruciating, I’ll be honest about that. But, Doom was the standard for FPS games for a reason, and although modern games are more detailed – there’s something special about the original that still shines today. 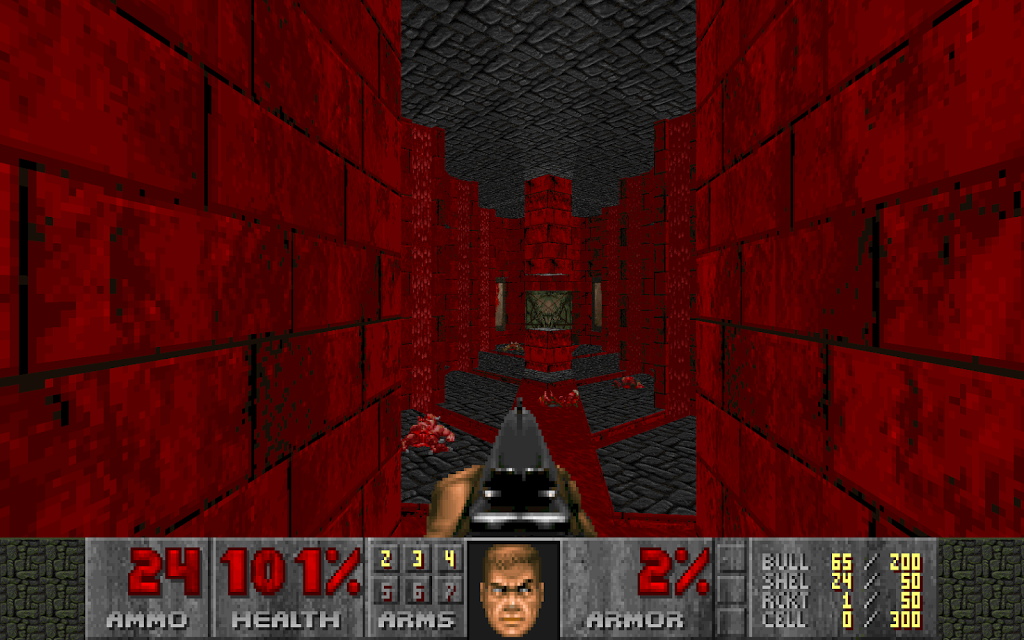 Difficulty: Variable–  The Doom games offer five difficulty levels. My reviews always use the default skill level. Even at default, several of the later stages from each game can be quite rough at first but are usually do-able for intermediate gamers. Players who are new to the genre might want to notch the difficulty back just a hair. The later two skill levels are not for the faint of heart… I know some guys that love them. But for me, they are not enjoyable.

Story: The storyline is pretty basic, but actually quite interesting. Demon invasions in a space station has a lot of potential if you ask me,  I only wish there was more of it in the game itself. Its really the perfect backdrop for a latenight survival horror, but ultimately, the title is a white-knuckle bloodbath in the end.

Originality: This game took what was started by Wolfenstein and improved upon it immensely. The multiplayer and mod-ability is what really made the game stand out. Even today, there’s no shortage of free Doom mods on the Internet. Doom is THE original FPS.

Soundtrack: The game uses basic sound files and midi instrumentation. This was typical for its day and age. The sound is quite bland by today’s standards, but it was very well done for its time. The music is nothing spectacular, but the tunes are peppy and appropriate.

Fun: In normal doses and for regular online play, Doom is a lot fun. However, I was easily burned out trying to playthrough everything in such a short span of time. That is no fault of the game developers. In fact, the sheer amount of content involved in my playthrough is actually a testament to how loved and fun the game actually is. All things in moderation.

Graphics: In it’s time, Doom was top of the line. It is several steps above what was accomplished in Wolf. The 3D environments were extremely well done, especially considering that graphics acceleration was still a few years in the future at the time the game was released. It is important to note, that several source-ports of the game actually enable some 3D acceleration for modern gamers who are interested.

Playcontrol: On the PC, the default controls seem a bit antiquated. Luckily, it’s easy to customize them. When set up in a typical WSAD/mouse config, the playcontrol is spot on. Those playing on the console, may find things to feel a bit awkward at first. In my opinion, the game didn’t translate well to a gamepad, but there are those who swear by it.

Value: Oddly enough, Doom still often sells for around $20 online. However, it’s usually pretty easy to catch it on sale. Personally, $20 is a fair price if you’re able to snag both games together.

Overall score (1-100): 100 -While the games may not seem like much today, it really is the father of the modern FPS game. PC gaming would be nothing without Doom. The games are available for next to nothing today so if you enjoy FPS games, there’s really no excuse not to have them in your library. Both games are really top notch titles, but if you have to chose one, you can’t go wrong with Doom II. Play with the lights off, and if possible, try the co-op mode in multiplayer. Many of my summer nights in the 90’s were spent blasting demons out of the air with my BBS buddies via modem… Ahh, the good old days.