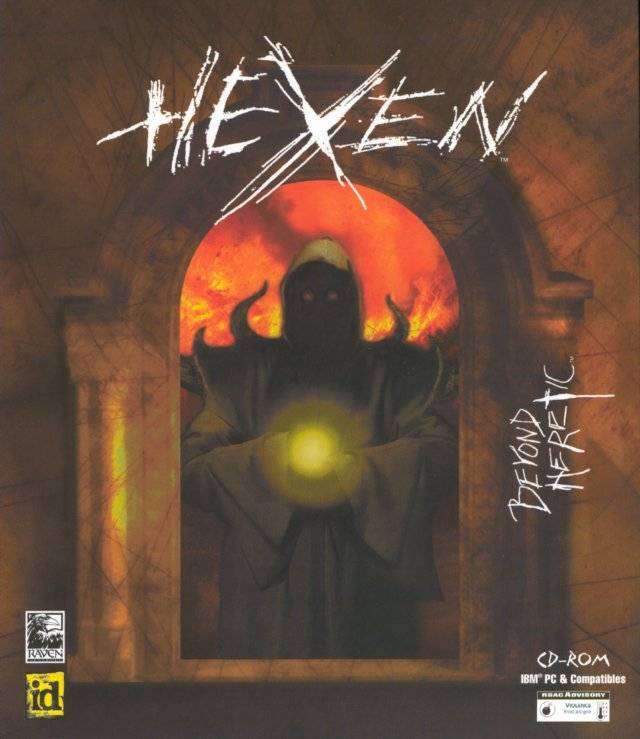 Rounding out my review of the original Doom-Engine games, we are brought to another FPS classic, Hexen. Hexen serves as a semi-sequel to Heretic. In this game, you play one of three heroes on their quest to defeat the second Serpent Rider, Kronos.

Hexen is similar to Heretic in many ways, but it is also just as unique. Again, the Doom engine was enhanced for this title. This time, to enable jumping and with the addition of more environmental effects. This was first Doom-Engine game to include both a midi and a CD Audio soundtrack. This game represents the original Doom-Engine in its most advanced state. However, as with other games of this type, I recommend the use of frontend software like zDoom to play the game on modern machines. 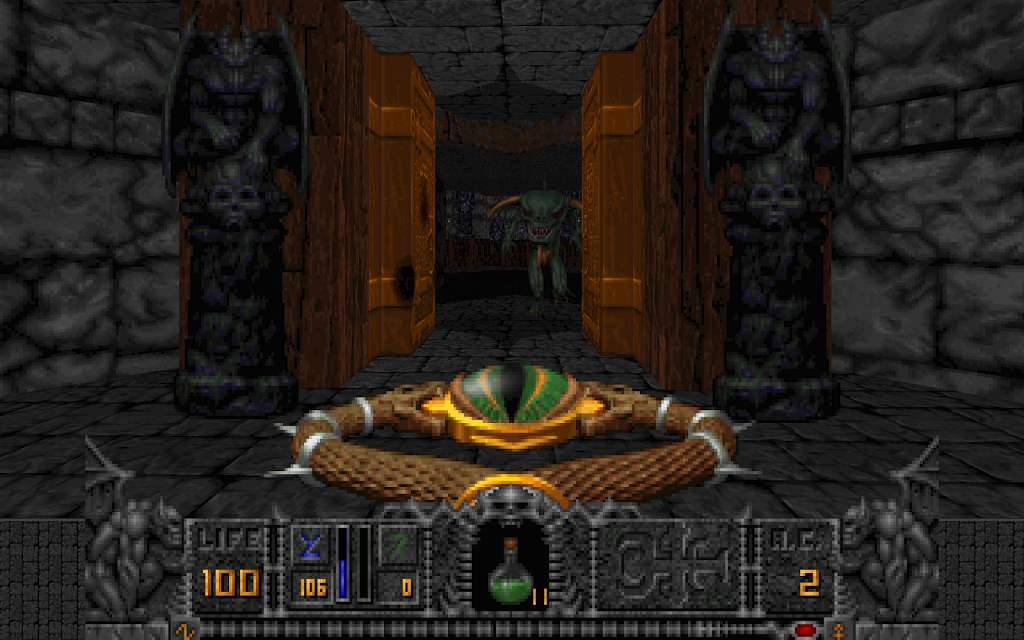 While some of the monsters and items are similar to what was seen in Heretic, there’s plenty of new concepts introduced in Hexen. Upon launching the game, the player must choose which type of character to play. Choices include Fighter, Cleric or Mage. Each character has their own strengths and weaknesses as well as weapons and abilities. Unique to this game is also the inclusion of an “ultimate weapon” that must be constructed by collecting pieces scattered throughout the various levels. For the first time we also have a hub-style level design. Meaning that players can revisit previous areas in the same game chapter. In fact, this is pretty much required in order to complete the game. Many hubs require the player to solve puzzles that have them to running from level to level in order to open new doors or portals needed to proceed. 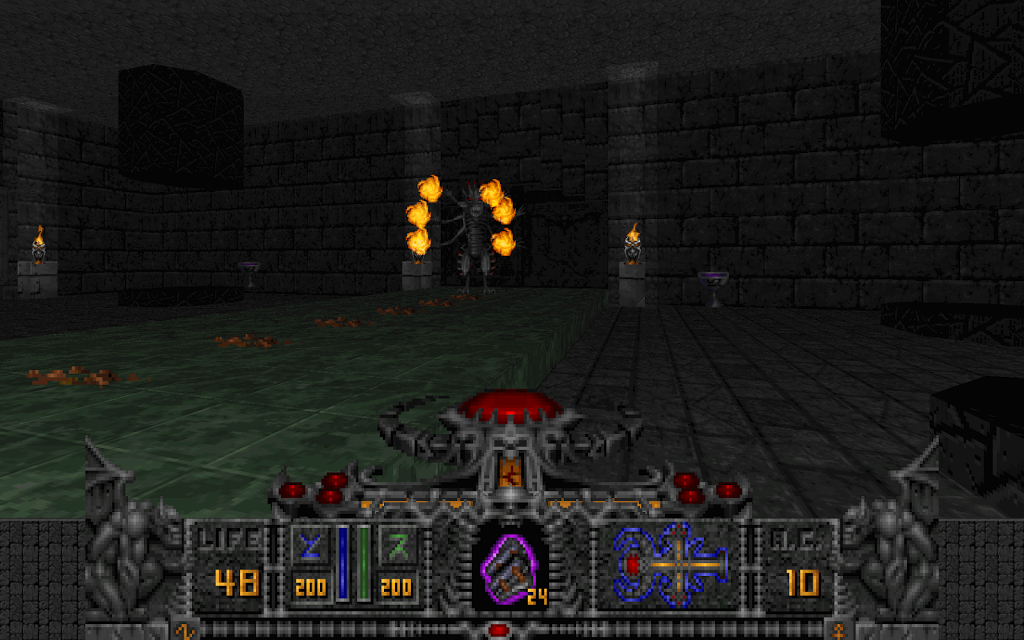 Despite these advancements, one thing that always bothered me about Hexen was the model design of some of the monsters. From a distance, enemies look pretty good, but as they get closer, the textures become very pixelated and distorted. I noticed this more than I have in other Doom-Engine games. In fact, encountering a mob of fast moving enemies at close range actually gave me a bit of motion sickness. Something that I NEVER encounter with video games.

Overall, Hexen was much better received than Heretic. Mostly due to its revolutionary level design. It was popular enough to spawn an official add-on called Hexen: Deathkings of the Dark Citadel. This expansion adds three new hubs packed with even more puzzles and challenges. Aside from a new single player adventure, there’s nothing else really worth of note included in the add-on.

I spent many late nights and uttered more than a few curse words at this game in my younger days. It’s beautiful game, and one that really leaves you with a sense of accomplishment upon completion. But I never felt the same spark of fascination with Hexen as I did with Heretic. I’m not really sure why. 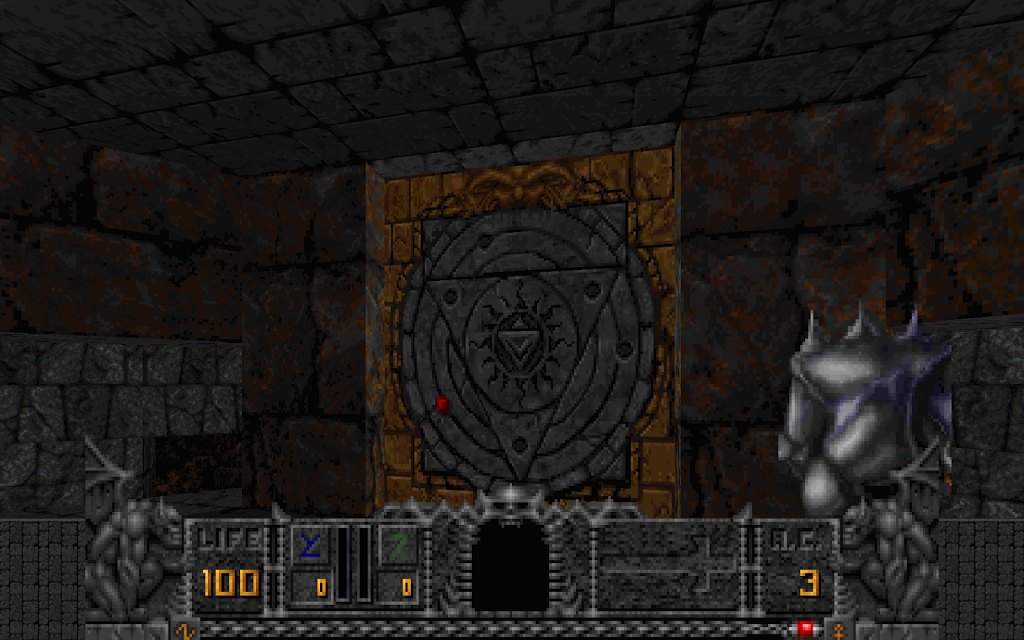 Difficulty: Variable–  Again, we have the same variable difficulty levels available in all Doom-Engine titles. Overall, I feel that Hexen is a bit more difficult than its predecessor simply because of the many puzzles and level hopping that go along with the level-hub system.

Story: Most of the game’s background is included in the game manual. There are little bits to read between hubs and the game’s ultimate nemesis likes to make an appearance from time to time just to taunt you. Being as this game focuses on the second of the three Serpent Riders, it’s not hard to guess that a third game was already in the planning stages.

Originality: Hexen brought a lot of new concepts to the arena of the FPS. The hub-style level design and ability to choose a character class added a bit of diversity to things.

Soundtrack: I found the music in the game to be well done, especially the CD audio. It’s fitting for the game, but not particularly memorable. I enjoyed the tunes in Heretic much more.

Fun: Hexen can be a lot of fun to explore. But a bit of patience is required. The hub system makes the game seem much bigger than it actually is. This can be frustrating for some players with a bad sense of direction. Also, unlike the Doom titles from which this game is spawned from, players benefit from planning and strategy more so than random blasting at enemies.

Graphics: The environments and special effects are very well done. As a I mentioned in the main review, some of the enemy sprites are pretty nasty looking up close, but I feel that is more of an engine problem that a texture issue.

Playcontrol: On the PC, the default controls seem a bit antiquated. Luckily, it’s easy to customize them. When set up in a typical WSAD/mouse config, the playcontrol is spot on. zDoom offers very good customization in this regard.

Value: Hexen is usually available along with its expansion for under $10. Very much worth the price.

Overall score (1-100): 85 – Hexen is a classic. It’s a great game and one certainly worthy of a look. However, I feel like by mid-game it starts to drag on. At least it did for me. Out of the two, I prefer Heretic for it’s brighter colors and somewhat simpler design. But make no mistake, Hexen is certainly worth your time. I only recommend the add-on for rabid fans.