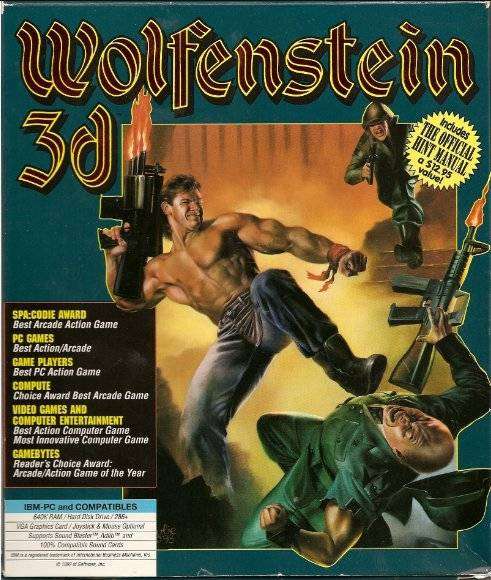 When people think about PC gaming, they often think about LED-laden water-cooled rigs running the latest version of Windows. Well, my first “PC gaming” experience actually occurred on a dusty old Macintosh at a friend’s house. As I’ve mentioned in other posts, that is where I was introduced to Wizardry. But it wasn’t long after my brush with the Mac that my parents purchased a PC for our home. The first game I remember playing on it was some variation of Battle Chess. This was quickly followed by some of the early Ultima titles. Those games were great, but they never caught my interest like the Wizardry games did.

One day, a friend of the family brought over a bunch of disks he had copied for us. Many of these were demos he acquired on various Bulletin Board Systems. The one that really caught my attention was the demo for Wolfenstein 3D. For those that don’t know Wolf3D is largely hailed as the original First Person Shooter game. But it was actually inspired by a much older PC game called Castle Wolfenstein (a crude overhead game with four-color graphics over a black background). Instead, Wolf3D simulated a 3D style environment seen through the eyes of the hero. While I only had the chance to play the demo originally, I did manage to get my hands on a full copy of the game a couple years later. The end result was many weeks of sleepless nights.

Wolfenstein 3D was originally released with three playable chapters, these are considered to be “the main game”. In Wolf3D, you play as an allied soldier/POW being held in a Nazi prison known as Castle Wolfenstein. The original goal is to simply escape the castle alive, but once you are free you proceed to put an end to some nefarious Nazi schemes and even do battle with Hitler himself.

Three additional chapters were later released. These are known as the “Nocturnal Missions” and serve as a bit of a prequel to the original game (although they are incorporated as chapters 4-6). Most versions of the game available today include all six chapters in one package.

Wolf3D proved to be so popular that a spin-off game was also released. Spear of Destiny serves as another prequel to Wolf. It tells the story of our hero’s quest to claim a powerful relic known as the Spear of Destiny from deep within a Nazi stronghold. This game features nearly identical gameplay to the original game, but does include some new art and textures. There are also two add-on packs available for SoD. It’s worth noting that you can purchase both Wolf3D and Spear of Destiny from Steam. Both are complete games including all add-ons. 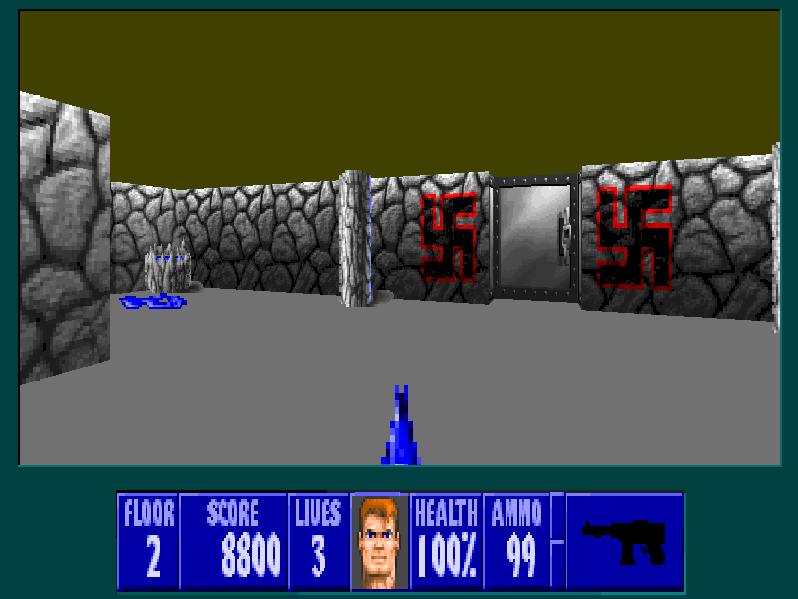 At the time these games were released, they were cutting edge. Color graphics, various sound effects, and even some low quality speech made these games mind-blowing. Even in today’s world where first-person shooters are a dime a dozen, these classic titles still hold up pretty good. For me, the game was enough like Wizardry (mazes and doors) to get me interested. The gameplay made me stay… Creeping through each level, peeking around corners so as not to be ambushed by lurking enemies, it’s fantastic.

Upon its release, the game was marred with controversy due to both it’s gratuitous violence as well as the liberal use of Nazi imagery. However, I personally think it’s important to remember that it’s a game that’s loosely based on world history, that being said…. it’s a game. It’s not meant to be taken too seriously.

Modern gamers often have an issue running the game on modern hardware, even when using legacy tools such as DOS Box. However, there is a nice frontend available for free that makes the game a cinch to run, I used it for my playthrough. It’s called ECWolf and it can be found here:

If you’ve never played this game, it is one that I certainly recommend. It’s a PC gaming classic and it’s available for nearly next to nothing on Steam. These games are bigger than they look. There’s hours of fun here. 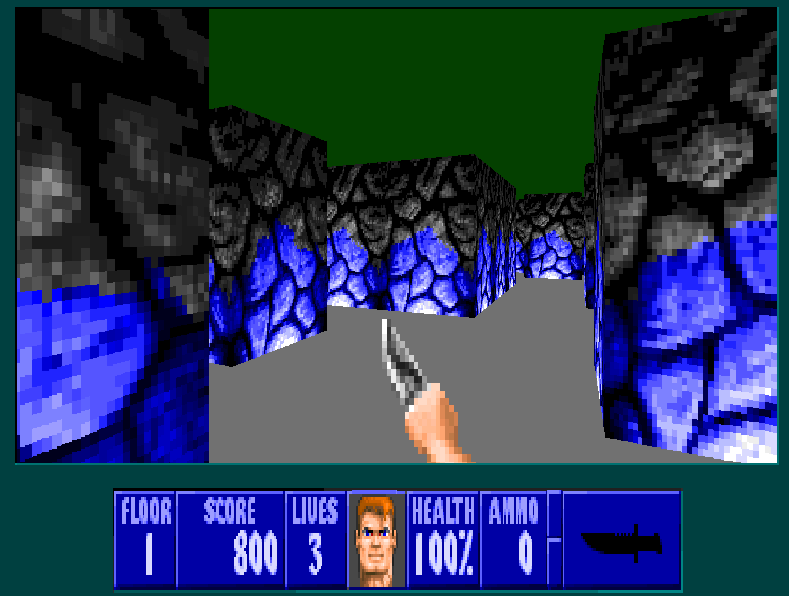 Difficulty: Variable–  The game includes four different difficulty levels. For new players, I recommend starting with the next to easiest, and increasing it as you get better. The game is certainly more rewarding on higher levels of difficulty.

Story: The storyline is basic but pretty neat. There are short readable screens at the end of each chapter that are quite amusing and help provide a little background to what’s going on.

Originality: Even though the game is a nod to the previously released Castle Wolfenstein, the concept and presentation of this title was unlike anything seen before. Wolfenstein 3D was the beginning of a new era.

Soundtrack: The game has a very basic soundtrack and like most DOS games of it’s time, the quality of it would vary depending on the sound capabilities of your PC. That being said, the tunes are quite original and pretty catchy. Several of them are based around military marches. Even the Nazi German Anthem makes an appearance…

Fun: I found this game to be full of fun back in the 90’s and I found it to be surprisingly enjoyable today. The game has a certain mood and feel to it that’s just very well done. It’s a blast!

Graphics: By today’s standards, this game is rather crude looking, but in it’s day it was top of the line. For modern players, I recommend using the ECWolf mod mentioned above. This provides an overall better experience and enables the game to be set to modern resolutions. This also sharpens things up quite a bit.

Playcontrol: The default controls are somewhat antiquated. If you follow my suggestion and us the ECWolf mod, you can customize the controls so that the game works like most modern FPS titles. To me, this is a must-have.

Value:  This game typically sells for around $5 on Steam. This price includes the original game and expansion. A fantastic deal!

Overall score (1-100): 95 – For the price and the amount of content you get, you really can’t go wrong. Wolf3D and Spear both provide hours of fun at almost no cost. It’s amazing to me how well this game holds up. It has truly passed the test of time in my opinion. WWII and FPS fans should not miss it. It’s the game that started it all.