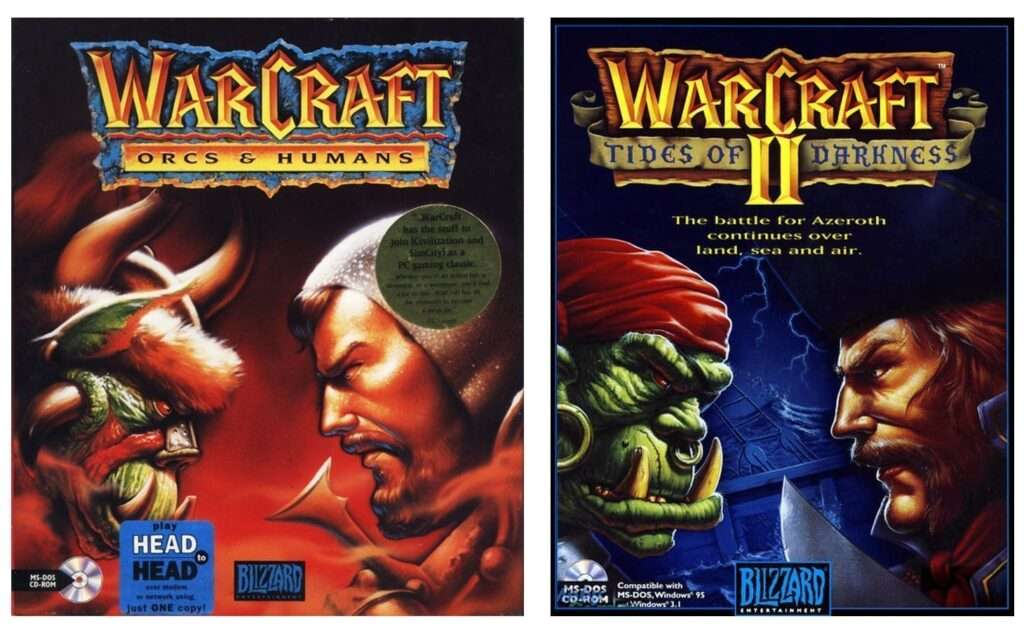 What trip down the PC gaming memory lane would be complete without mentioning the juggernaut known as Warcraft. These games help popularize Real Time Strategy games almost as much as the ever popular Civilization series, not to mention they provided a setting for what is arguably the most popular MMO of all time, World of Warcraft.

I should take a moment to note that I’m not really a fan of RTS games. There’s nothing wrong with the genre, I get the concept, but personally I find them to be a bit boring as a general rule. Obviously, this is a personal opinion as many people love these games with a passion. I just don’t care for them. That being said, if I’m forced to play an RTS game, I’m quick to go with a Warcraft title.

The concept of Warcraft is as follows. In the land of Azeroth there is a war brewing between two factions, Orcs and Humans. The Orcs come from another world and have recently invaded Azeroth through a magical portal. Their attacks on human villages and cities have increased in ferocity and the humans have began to strike back.

In these games, you can play campaigns as both the Orc Horde and the Human Alliance. Each campaign is filled will a number of scenarios. For example, you may be asked to construct a specific number of buildings to help train troops to defend against an upcoming invasion. To do so, you will first need to harvest lumber and mine gold to finance the operation. Once you have enough, you can build a barracks to train soldiers. As your soldiers explore and defend their territory, your laborers can continue to mine and harvest so that you are able to bolster your defensive and offensive capabilities. As you progress through the games, the objectives increase in complexity and difficulty.

The original Warcraft was released in the days of DOS and shows its age quite a bit. Despite this, the game was actually quite advanced for its day. Both the audio and graphics were really top of the line at the time. In fact, this is what first captured my attention about the game. Admittedly, I never played the original Warcraft all the way to completion until this review, but there were many nights in my High School days spent wasted on this game instead of doing things more productive. That’s the sign of a solid game.

Despite everything that I enjoyed about the game, it quite honestly got on my nerves pretty quickly as well. The feedback that you get from your units when assigning tasks is repetitive and frequent. I found myself playing with the sound off as a result. The UI also feels a bit basic and loose at times. Also, the game tended to drag on a bit and had an overall “rinse and repeat” feel to it.

Regardless of some of its shortcomings, Warcraft was a huge success. Naturally, a sequel was released that provided a better all-around experience. Warcraft II took all of the great elements of the first game and made them even better. Aside from enhanced graphics and audio, many complaints about the original game were addressed. The storyline also received more of a focus and as a result, the game is bit more engaging for those who are into that sort of thing. Most importantly, Warcraft II also brought with it a multiplayer experience.

Warcraft II spawned an expansion that added a new setting and two new campaigns and multiplayer enhancements. A definitive version of the game was eventually released, The Battlenet Edition. This version compiled both the main title and its expansion, as well added support for Blizzard’s Battlenet Network. Playing online was now easier than ever. If you’re curious to check out this classic game, the Battlenet Edition should be your first stop.

These days, most players are likely to turn to Warcraft III to scratch that classic fantasy RTS itch. But there’s still a certain charm in looking about on the games that started the whole thing.

Difficulty: Somewhat Variable–  The original Warcraft is pretty straight forward. It has its difficult moments, but the enemy AI is fairly predictable and easy to thwart if you’re willing to plan ahead a bit. Warcraft II is a bit of a different story. This game seems to be a bit tougher in the long run, but there are some settings that can be adjusted in the main menu that makes things a bit easier to deal with. For example you can adjust the game speed or disable the “fog of war” feature.

Story: Most of game story of the first title is found in the game manual. The second game does a slightly better job of providing lore in the game itself. The backstory for these games is actually quite detailed. Novels were written that provide more information than you can shake a stick at. If you enjoy the games, and fantasy storytelling, there’s actually lot to see if you’re willing to do a little digging.

Originality: While RTS games were nothing new, the Warcraft series really gave a new approach to the genre. Warcraft really laid the foundation, while Warcraft II provided the polish to make the series shine

Soundtrack: The first game features crude, midi based music but some surprisingly good speech effects. The music in Warcraft II is much improved and features some really well done, epic music to accompany the gameplay. My only complaint with both titles is really the frequency and redundancy of some of the in-game speech. Assigning a command to nearly any unit is followed by a ridiculous reply. This gets old after a while.

Fun: If RTS games are your cup of tea, there’s hours of fun to be had here. Unless you’re a completest or a rabid Warcraft fan, I think its safe to suggest that you can skip right over to Warcraft II for the best all around experience. Even with myself not being a fan of RTS-style games, Warcraft II is quite enjoyable.

Graphics: By today’s standards both games are somewhat crude, but at the time these games were released the graphics were astounding. Warcraft II takes a noticeably more “cartoonish” approach that the original game. I assume this was done for clarity, but it eventually became a staple of the series.

Playcontrol: These games are played primarily using the mouse alone. The speed in which the screen scrolls around seems a bit too accelerated for my tastes, but it’s easy to get used to. Warcraft II is a dramatic improvement over its predecessor in terms of UI. Still, it always felt a bit “off” to me.

Value: At the time of this writing, these games are currently out of print and therefore will fetch collector’s prices.

Overall score (1-100): 80 – Great games overall but not without their quirks. Warcraft II is by far the most accessible of the two for new players. Multiplayer games can be a bit hard to find these days unless you’re using Battlenet. As I said before, I’m not a fan of these types of games as a general rule, but even I can see what makes Warcraft a great gaming experience.