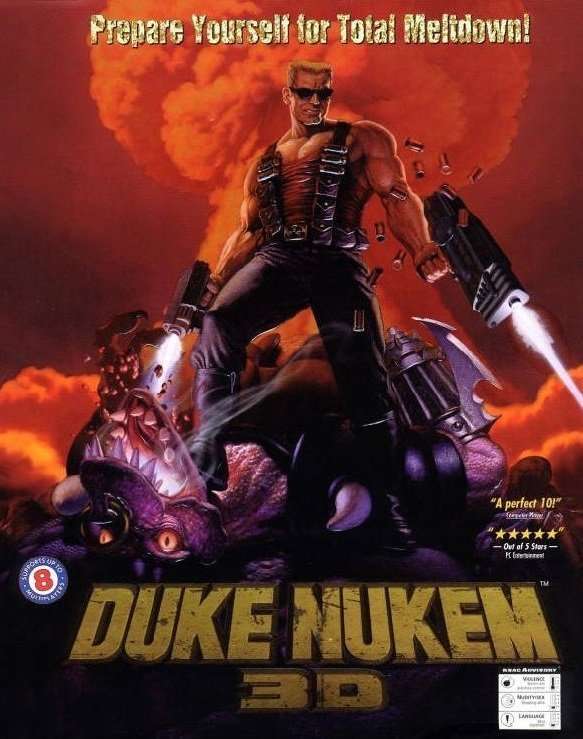 Taking a break from my obsession with Final Fantasy XIV, I did manage to get back on track with some classic PC gaming. Next up on my list was another classic first-person shooter from back in the day. The iconic Duke Nukem 3D. This is a title that is almost certain to bring pangs of nostalgia to almost any PC gamer over the age of thirty.

During a time when first person shooter games were all the rage, A company called Apogee/3D Realms decided to get into the action by taking a character from one of their franchises and reinventing him as a comical wisecracking action hero, and thrusting him into a 3D style environment filled with half naked women and bloodthirsty aliens. It worked and it worked well.

For those that are unaware, Duke Nukem was the star of two previous titles created by Apogee. These first two games were simple side-scrolling shooters that were met with mild success. But were largely unknown by the vast majority of PC gamers. The release of Duke Nukem 3D, changed that. For many years, these older games were left to antiquity and were rather difficult to run on modern systems. Recently, these titles have been made available on Steam, so now gamers can easily see the origin of their beloved hero.

Unlike its basic origins, Duke Nukem 3D was created using the technology of the Build Engine. This platform was quite unique in its design and proved to be a very versatile option for 3D games. The basic layout of Duke3D is very similar other FPS games of the time. You have a variety of weapons and accessories that can be used at will. Enemies often lurk around every corner. Keys must be obtained to unlock new areas and ultimately reach the end of the level. So in many ways, a majority of the elements found in the game are rather unoriginal. Where Duke REALLY stands out from the rest of the genre is in content.

The premise of Duke Nukem 3D is simple. The story takes place in a near-futuristic world. Duke has just returned back to earth from his adventures in Duke Nukem 2, only to find that earth has been invaded by aliens. It seems these “alien bastards” are capturing all the hot women on earth to force them to breed. Duke is not going to stand for this crap. Hence, the game begins.

If can’t tell from the synopsis, Duke3D is a very mature game. It oozes sexuality and toilet humor. The game is loaded with ridiculous puns, mutant “pig” cops, strippers, aliens sitting on the toilet, etc. Duke is famous for muttering random one-liners at certain points in the game. (Many of these are references to iconic movies or pop-culture jokes). 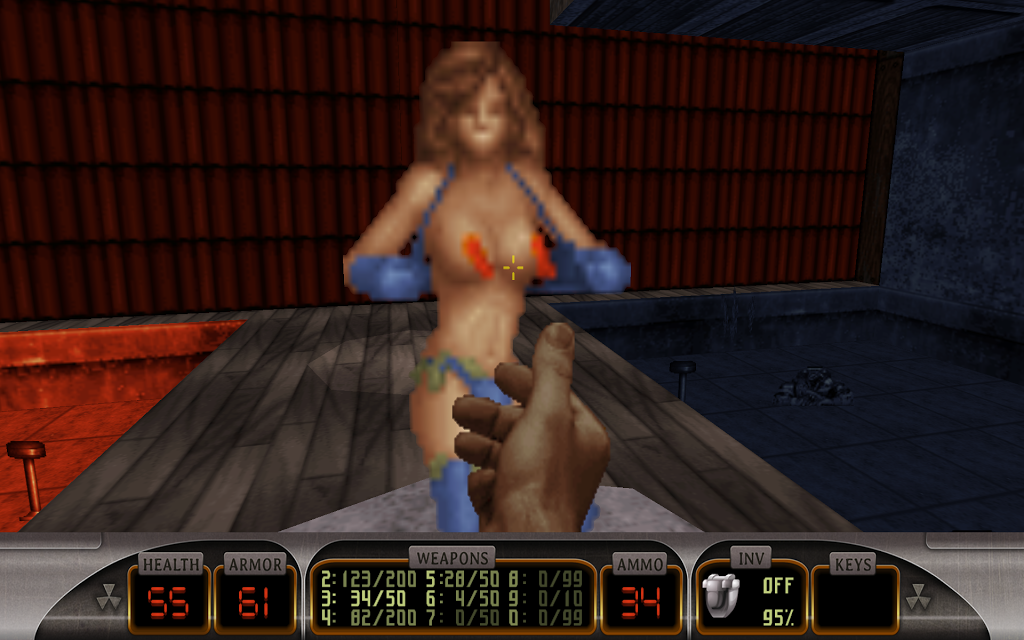 All silliness aside, the game is actually a very good example of excellent FPS design. The levels are very well made and interesting. The enemies have decent AI, and the arsenal available to Duke is diverse. The game was originally released with three episodes. A fourth episode was added on in the Atomic Edition. Due to the popularity of the game, several add-on packs were also released over the years. These days, the best way to experience the game is through the new Megaton Edition on Steam. This version features The Atomic Edition of Duke3D along with all of the official expansion packs: Duke It Out In D.C., Nuclear Winter, and Duke Caribbean: Life’s a Beach.  (Each one seems to get more and more ridiculous as you go).

In the old days, I owned a copy of the full game and the D.C. add-on. For this playthrough, I decided to experience all of the additional chapters. I must say, some of this is really over the top. The Nuclear Winter scenario is one of the stupidest things I think I’ve ever played. You have Duke doing battle with aliens in Santa outfits, snowball-throwing Snow Men, big breasted machine-gun wielding elf woman, and all the while a soundtrack of cheesy Christmas music is playing in the background. That being said…. I actually found it to be quite entertaining. Kind of like a really bad movie. 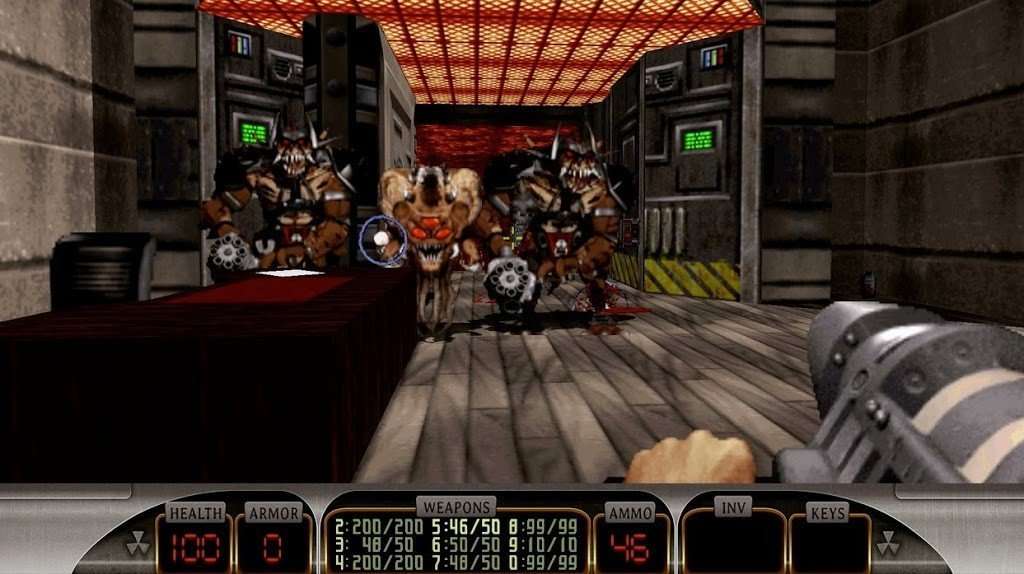 All the silly add-ons aside, Duke Nukem 3D is a game that any serious FPS player should experience at least once. The main scenario is definitely worth a look. The Megaton Edition plays extremely well on modern PCs and it’s available at a great price. Even if doing battle with Santa Claus, or blasting aliens with a squirt gun is not your cup of tea, the main game is still a classic in its own right.

Duke does feature multiplayer, and for the most part it’s very well done. Finding active players, is a different story. But if you can manage, the multiplayer portion of the game is excellent. 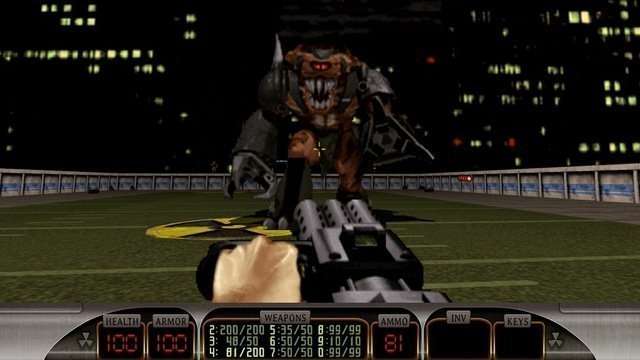 Difficulty: Variable–  Like many games of this type, there is a variety of difficulty settings. I find that these are fairly appropriate. Gamers experienced with this type of game would do well to stick with the default option, while those without a lot of experience may benefit from one of the easier options. The hardest setting is pretty intense and only recommended for those hardcore elitist types.

Story: The story is completely ridiculous. But then again, the whole game is really one big tongue-in-cheek parody of itself. Its important not to take things too seriously with a name like “Duke Nukem”.

Originality: Many aspects of this game have been done before. So in mere mechanics, Duke3D is a mix of recycled ideas. The originality is found in the humor and mature content. At the time, I had never seen a game like Duke. There was foul language scattered here and there, half-naked women and tons of violence. To the eighteen-year-old me, it was awesome.

Soundtrack: The title theme is quite catchy. The in game audio is hit or miss. Nothing too memorable. The add-on packs offer some comical, but appropriate background music.

Fun: If Duke Nukem 3D is anything, it is fun. The Easter eggs scattered through the game combined with Duke’s one-liners keep most gamers smiling. Not to mention the game is actually very well designed and quite good on its own.

Graphics: The build engine is a weird blend of 2D sprites in a 3D environment. The game itself was never officially released with accelerated graphics. Even the Megaton Edition features the original pixels with a new accelerated HUD. This means that things can get pretty blocky at times, especially when getting close to an object. At today’s resolutions, however, things still manage to look pretty good overall.

Playcontrol: Like many of these old games, the default controls seem a bit antiquated. The Megaton Edition comes with default controls that better match those of today’s games, but you still have the ability to customize the controls to however you like.

Value: The Megaton Edition sells for around $10 and is often found even cheaper when on sale. Regardless, for $10 you get more than your money’s worth.

Overall score (1-100): 85 – I love Duke Nukem 3D.  It’s a great game and I’m tempted to give it a better score. But admittedly, not for everyone. It is certainly not a title I would let my child play. But make no mistake, I’m not judging it by its mature content. In terms of design and fun, it’s a top notch title. Many players may be turned off by the corny humor and excessive sexuality and violence, however. For those looking to experience the best that early FPS titles have to offer, there are certainly better examples of the genre. Duke is all about one thing, having a fun time and not taking things too seriously.