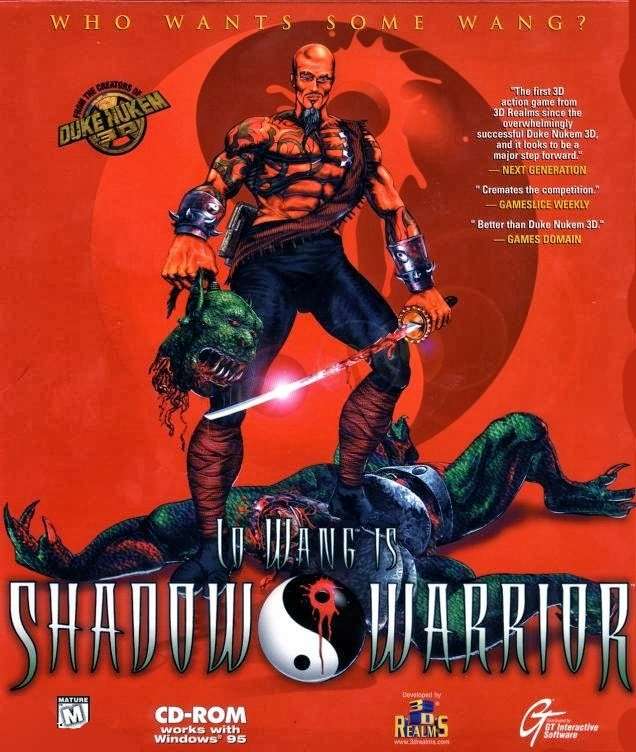 Somehow I’ve managed to tear myself away from Final Fantasy XIV long enough to bang out another PC classic from my youth. Next up in my list of classic FPS titles is another BUILD engine game, Shadow Warrior.

Shadow Warrior is best described as a Kung-Fu version of Duke Nukem. Instead of a burly action hero, you play as the aged Kung Fu master, Lo Wang. Wang, much like Duke is a dirty-minded wisecracking antihero. The premise of the game is simple; until recently, Lo Wang served as the personal body guard to a the President of a futuristic corporation known as Zilla Enterprises. Upon learning that Zilla had plans to take over the world by summoning demons, Lo Wang resigned his position. The game begins when some of Zilla’s goons pay Lo Wang and unexpected visit in his dojo. Not willing to be the target of cut-rate assassins, Lo Wang makes it a goal to put an end to Zilla’s evil ways. 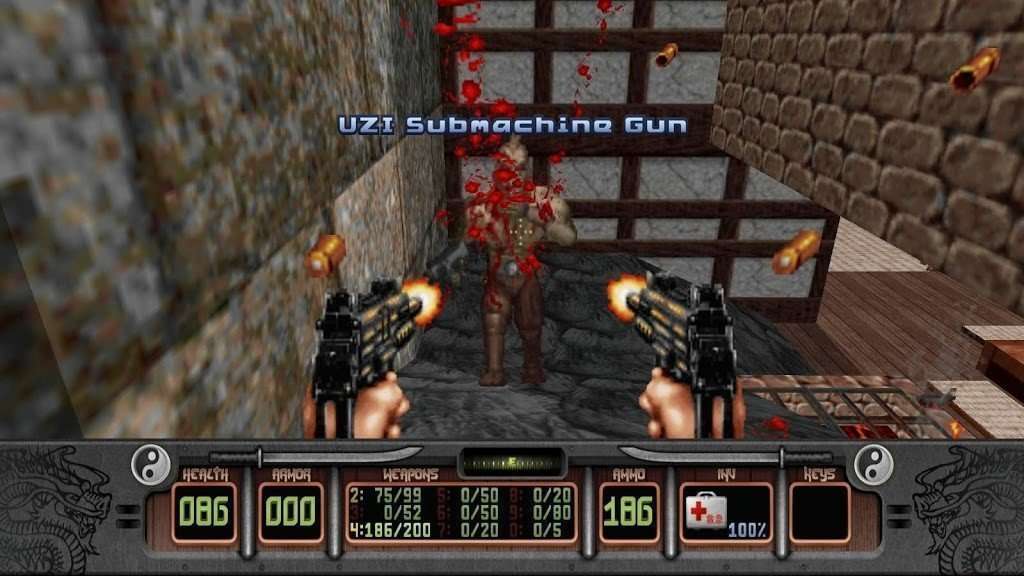 Players familiar with Duke Nukem 3D or other BUILD engine games will feel right at home with Shadow Warrior. The game play is very similar. You progress through the game level by level, obtains keys, unlocking doors, finding ammo and weapon upgrades and defeating enemies.

The game is loaded with Easter Eggs and humorous references to Kung Fu movies and anime pop culture references. These are often scattered throughout the levels, which by the way, are very well done for the most part. In fact, I think the level design in Shadow Warrior is a step above that of Duke 3D. When it comes to violence, Shadow Warrior is really over the top. Enemies get sliced in half, blood spurts all over the place. Also, the game is filled with toilet humor and half-naked anime girls. As an eighteen-year-old, it was the greatest thing I’d ever played.

Much like Duke Nukem, the weapon selection in Shadow Warrior is very diverse and interesting. Lo Wang can wield anything from Ninja Stars and a Katana to Submachine Guns and Nuclear Warheads. A few of the weapons in the game seem to be more geared towards multiplayer than the single player scenario.

Until recently, the game was a bit hard to come by. Thankfully, a new port of the game was recently made available. Shadow Warrior Classic Redux, contains the original game, as well and two previously unreleased expansions. 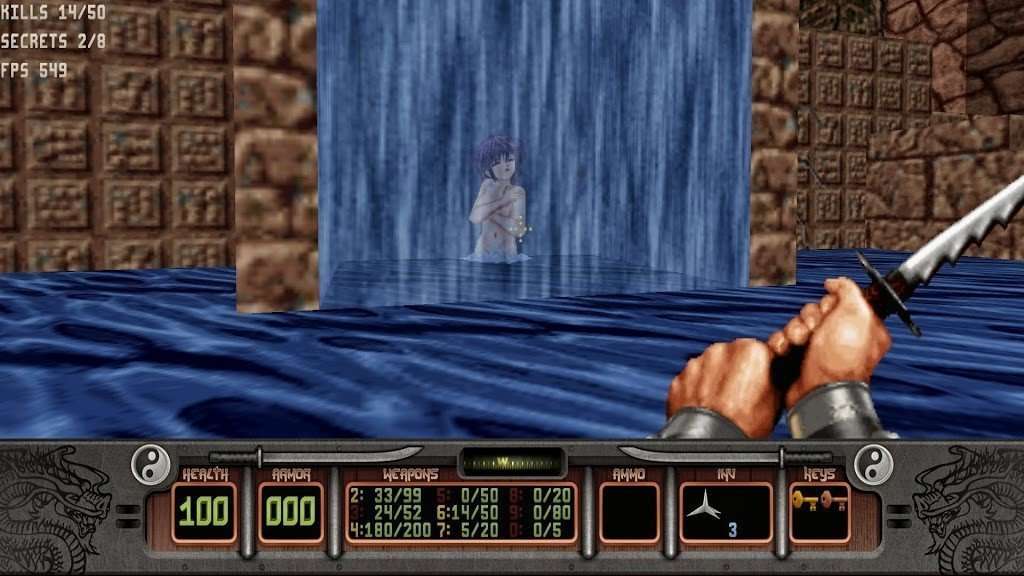 I played through the original game years ago, but never had a chance to dive into the add-ons until now. I have to admit that the main game seems to shine way brighter than the two expansions. The first of the two, Wanton Destruction, does feature some pretty interesting levels, but I found it to be a bit long in the tooth. The second, Twin Dragons bored me almost completely. Regardless, these are included with the main game, and the price is well worth it. It’s important to note, that a third add on was also under development. Shadow Warrior: Deadly Kiss was teased and advertised, but from what I hear, development on the title was cancelled before it was completed. Rumor has it that the files were recently discovered and MAY make their way to the public before long.

Multiplayer-wise, the game can really be a lot of fun assuming you can actually find someone to play with. As I mentioned earlier, several of the weapons seem geared for deathmatch (Caltrops, sticky bombs, etc). Plus, there’s some really great deathmatch maps included with the game itself. If you can a friend to team up with, a lot of fun can be had.

A remake of the game is coming out in the VERY near future, and I plan on making it my next review. Until then, here’s the breakdown: 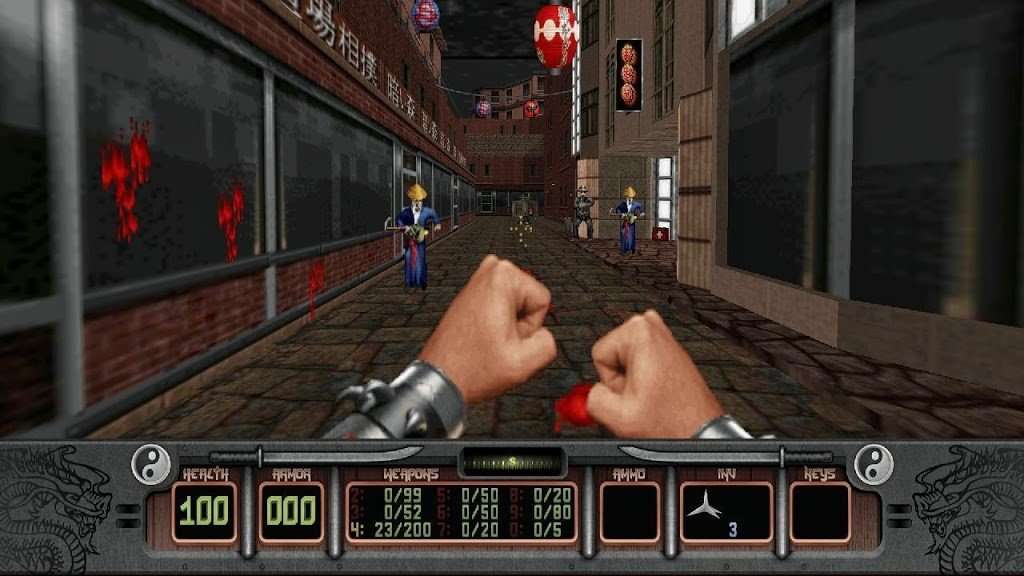 Story: Build game = ridiculousness. That’s to be expected from the makers of Duke Nukem 3D. Don’t go in expecting something serious and you won’t be disappointed.

Originality: Shadow Warrior is simply Duke Nukem 3D in an Asian motif. But, that doesn’t seem to matter. The dev team did an excellent job at taking the Duke3D formula and making it into something new.

Soundtrack: If you’re lucky enough to have the original game CD, then be ready for some really high quality music. The original CD ROM contained redbook audio tracks that serve as background music. Even the modern port of the game will support it if you have it. If not, there’s little to hear outside of the environmental sounds in the game. The CD audio tracks are very well done, and add quite a bit to the experience. Sadly, most players of the Redux version will miss out on this.

Fun: As a fan of Asian culture, I found this game to be very entertaining. These days, many people consider the racial and cultural stereotypes to be a bit over the top. Maybe they are, I don’t know. But the game is a parody of itself and its important to remember that its not meant to be taken seriously.

Graphics: Originally released as a DOS game, the graphics are very similar to other software rendered BUILD engine titles of the day. Shadow Warrior, did however, receive an official “3DFX” patch during its lifecycle. In those days, hardware accelerated graphics were the newest trend and I felt that the original patch was a bit rushed and actually a step backwards. Luckily, the modern version looks great on today’s high resolution PCs.

Playcontrol: Like many of these old games, the default controls seem a bit antiquated. The Classic Redux version comes with default controls that better match those of today’s games, but you still have the ability to customize the controls to however you like.

Value: Oddly enough, Doom still often sells for around $20 online. However, it’s usually pretty easy to catch it on sale. Personally, $20 is a fair price if you’re able to snag both games together.

Overall score (1-100): 85 – I am a big Shadow Warrior fan. But, it’s not a game for everyone. The game seemed to have been lost in the shuffle of FPS titles back in the early days. It was released as a time when PC games were booming. The focus was shifting to hardware acceleration and gamers were beginning to focus on multiplayer first, and single player secondary. I recommend this title any one who enjoyed Duke 3D, or likes games with an Asian flair. But I fear that many of today’s gamers just won’t “get it”.