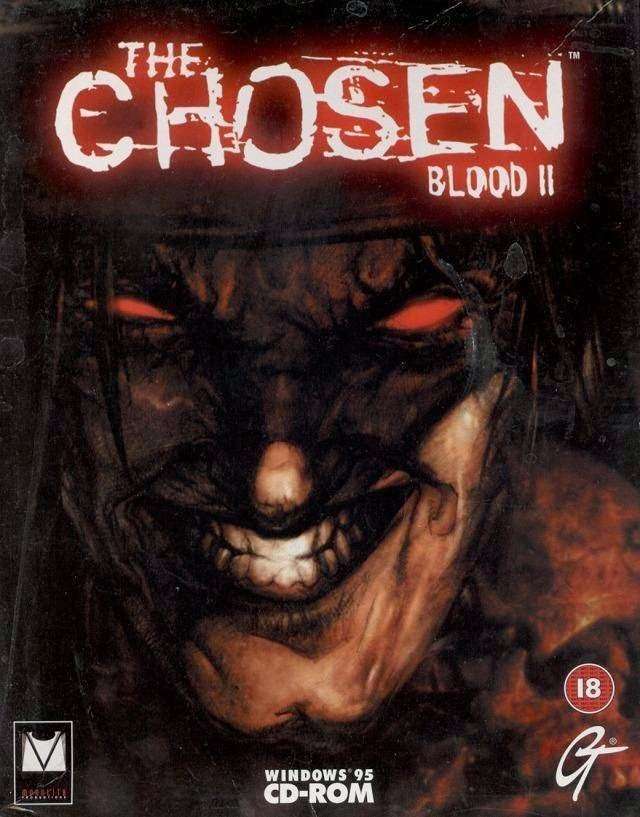 Happy Halloween!! Taking a step outside of my chronological reviews, I decided to finish off the month of October with the sequel to my previous review, Blood II: The Chosen.

The Chosen is the official sequel to the original Blood. It takes place one hundred years after the first game and features Caleb on his quest to resurrect his companions (the same ones that were seen being slaughtered at the beginning of the original game). As it turns out, the cult of Tchernobog has evolved in a powerful corporate entity over the last century and has their claws into almost every aspect of modern life. Now known as CabalCo., the cult’s new goal is resurrect their long defeated deity and put an end to Caleb in the process.

Unlike the original Blood, Blood II is not a DOS-based game. Instead this game was built for Windows using the now-dated Build/LithTech engine. At the time of release, the game engine worked well on a variety of hardware, but today it is actually very difficult to run on most modern computers. The engine does not perform well on 64-bit and multi-core processors and also has several issues with modern versions of DirectX. For many, this will make the game completely unplayable without some heavy tweaking and modifications. Buyer beware. 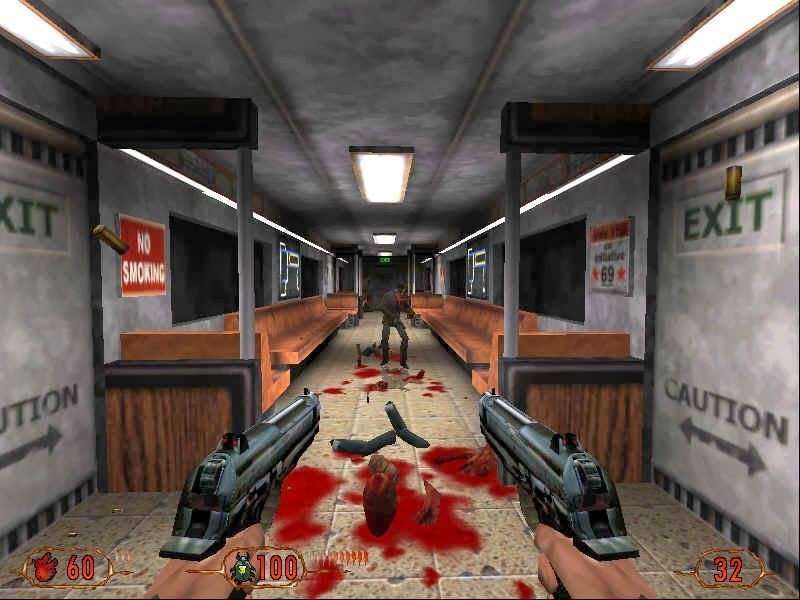 Playwise, the game is radically different from the original. For one, the game is set in the near-future so the environment is much more modern. No more old-school hospitals and train stations. We now have urban areas and office buildings. The graphics are 3D accelerated, but seem very crude, even for the time the game was released. Character models receive the worst of this criticism, while the environment seems to hold up a little better.

The music and sound effects are very well done and are fitting for the title. However, as mentioned above, these usually glitch-out on moderns PCs.

The story is fairly interesting, but overall, I feel it did not keep with the spirit of the original. I would have preferred to have seen a sequel set in a time closer to the that of the first game. In my opinion, much of what Blood such a great game was the atmosphere. This largely seems to be lost in the sequel. 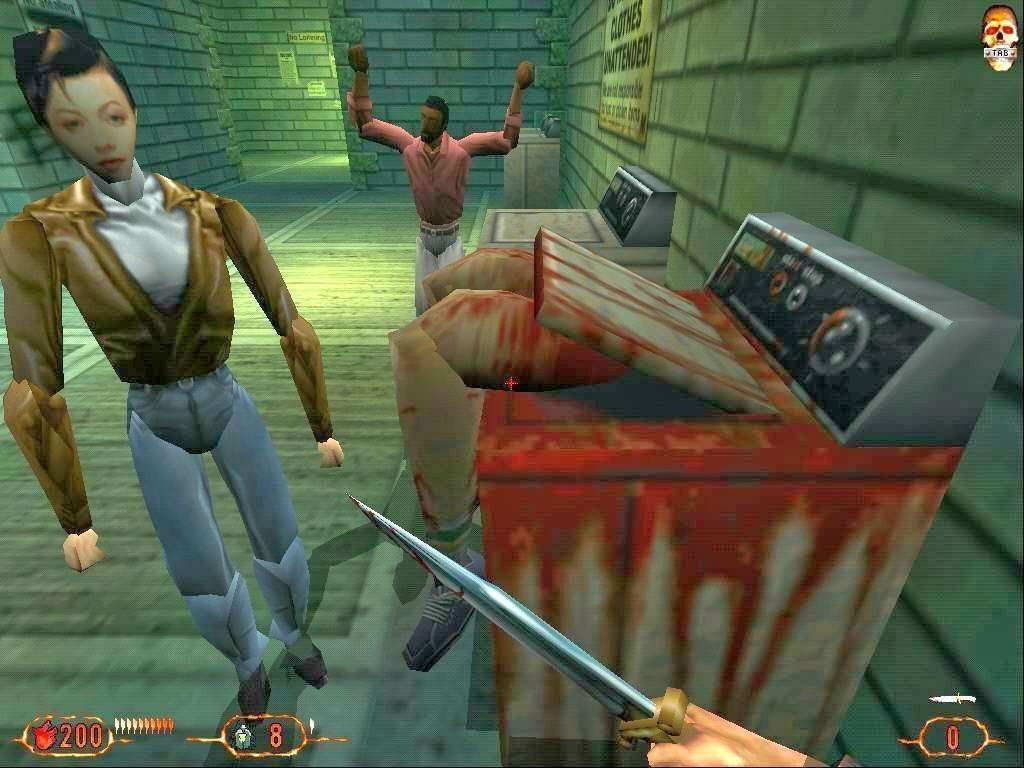 An official add-on called The Nightmare Levels, was later released. This expansion provides some additional details on the backstory of the game characters. Here we get a little bit of the original flavor back. The add-on contains a heavy dose of nostalgia from the first game. This comes in the form of some western-themed levels and a return of the robed-cultists. There’s also some entertaining levels featuring Ophelia and the other members of The Chosen.

So, what IS good about Blood II? The multiplayer! The Bloodbath (deathmatch) mode allows the player to play as one of The Chosen, each of which has their own set of abilities. The multiplayer levels are very well designed and provide a lot of fun. Multiplayer is even better with the Nightmares expansion installed as new multiplayer modes are available. (Including my favorite: zombie-head soccer). If you have some friends willing to play, there’s still A LOT of fun to be had here.

All in all, Blood II is a game that has not really aged well, but it’s worth a look if you are fan of the original. Sadly, getting the game to run on modern hardware is a bit tricky. Currently, my best advice is to purchase the game from GOG.com and read through the forums for various tips and tricks on how to optimize your experience. Hopefully, the game will receive some attention in the near future like so many other games that are being rebooted and re-polished. But time will tell. 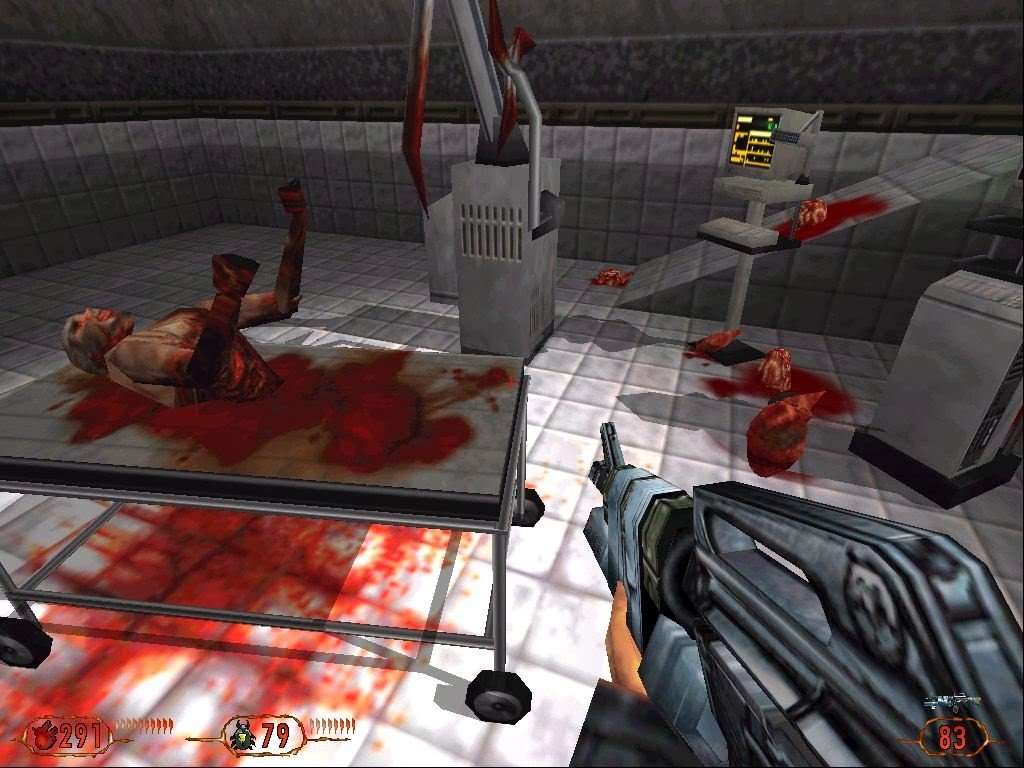 Story: This game continues the storyline of the original and focuses on Caleb’s quest to resurrect his friends and bring down the Cabal. It’s certainly an interesting concept, but one that didn’t strike a chord with me personally. I guess it could have been worse though.

Originality: At this point, the FPS genre was beginning to get a little lazy in its implementation. This game manages to avoid staleness by allowing you to play using various characters, each with their own traits. (However, keep in mind that the storyline of the single-player scenario is out the window if you play as anyone other than Caleb). The multiplayer is pretty par for the course, but there’ a few neat ideas present in the expansion.

Soundtrack: The music and environmental noises are very well done. Many of the characters littered throughout the levels will have some wisecracks to utter here and there. These can be entertaining at first, but they soon become repetitive and annoying. Caleb’s one-liners are back and just as good as always.

Fun: A run through the single-player scenario has its moments, but most of the fun lies in the multiplayer part of the game. Sadly, there’s pretty much nobody playing this game out there. So unless you have a friend, you’re out of luck.

Graphics: This is a bit of a mixed bag. There’s a lot that the LithTech engine got right. Shadows and lighting are very well done, and were cutting edge for the time. But model rendering is sloppy and awkward looking. Just look at some of the screenshots in the review and you’ll notice the odd, right-angle faces and body construction. The LithTech engine was a weird beast.

Playcontrol: This game was released during a time when FPS controls were shifting from arrow-keys to the new WSAD default that we are familiar with today. The default controls are bit strange, but are easily customized. The oddest thing about this game is the mouse control. It requires quite a bit of fiddling in order to find the right “feel” for the look camera that most others games seem to get right the first time.

Value: Sells for under $10 on GOG. But due to compatibility issues, buyers beware.

Overall score (1-100): 60 – Overall, I feel that this game is a somewhat poor successor to the original. But it does have its moments. I have a hard time recommending this for the casual player. This is one for the fans only.  I remember enjoying the game much more what it was originally released than I did today. Most of this is due to various technical and compatibility issues. So if you happen to have a thirteen year old PC laying around, I would have to recommend you dust it off for this game. If not, prepare to spend a lot of time going through trial and error sessions to get things running to your liking.  The game itself suffered by being rushed to release and is really only worth your time if it played in tandem with the expansion. Luckily, they are sold together these days.

Other Reviews In This Series:  Blood – Blood II