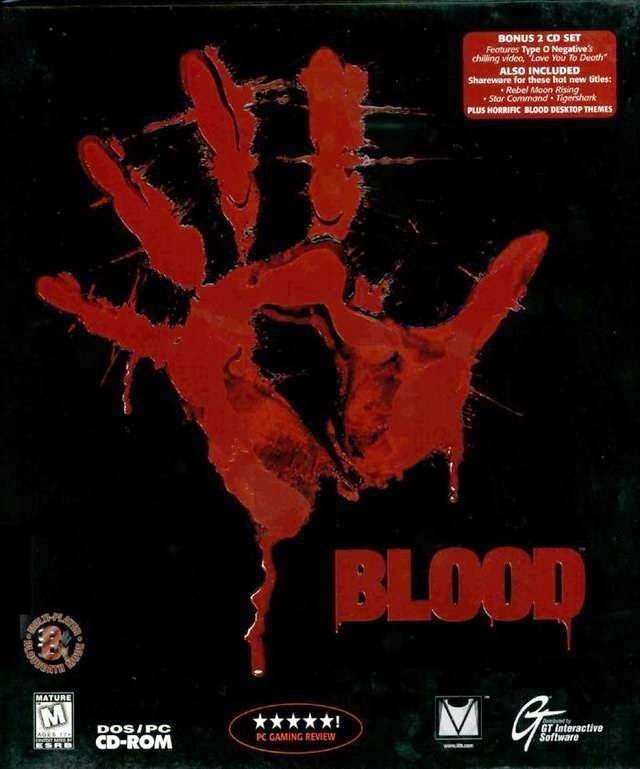 With Halloween just around the corner and my recent playthrough of two other Build-engine games, what would be more appropriate for the month of October than a playthrough and review of the classic PC game Blood?

Blood is one of those games that I fell in love with the very first time I saw it. I remember coming across it on a store shelf with a friend of mine. We bought it, took it home and spent the better part of the week taking turns working our way through the game. We were hooked.

In this title, you play as the recently resurrected anti-hero: Caleb. Prior to the beginning of the game, Caleb, along with his lover Ophelia, had long been a faithful servants to the dark god Tchernobog. One day, for reasons still unclear, Tchernobog expressed dissatisfaction with his servants and had them executed. The game begins with Caleb rising from the grave seeking both answers and revenge for his untimely demise. 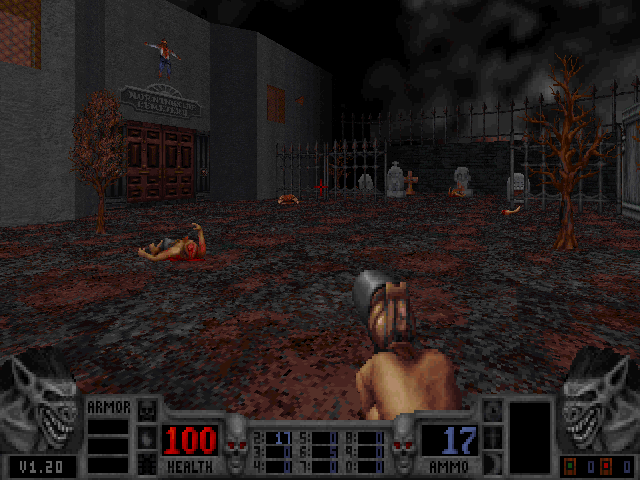 The majority of the game features Caleb making his way through various horror-themed levels, and fighting off hordes of zombies and cultists until he reaches his final destination the inner-sanctum of Tchernobog.

Blood plays very similar to most other Build-engine games. There’s a variety of weapons to choose from. Caleb’s arsenal runs the gamut from mundane weapons like a Pitchfork, Flare Gun, and shotgun, to more exotic items like a Tesla Cannon and Voodoo Doll. Also, much like Duke and Lo Wang, Caleb will occasionally spout off humorous one-liners. These often take the form of movie quotes or even the occasional song.

One of the more noticeable features of Blood is…. the blood. This game is gorier than Shadow Warrior. Bloodied corpses can be found in droves, enemies meet gruesome deaths, and you will often uncover rooms covered in gore and body parts. Zombies can be beheaded and then their heads can be kicked around like soccer balls (leaving a trail of blood wherever they roll). So this is not one for the kiddies… 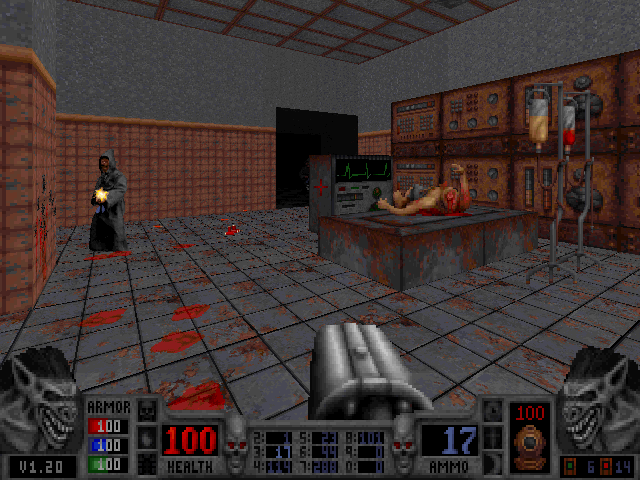 Shortly after the release of Blood, followed an expansion called Cryptic Passage. This add-on features an additional chapter with ten new levels. The levels seem very well designed, but to me, they didn’t seem to fit with the plot of the main game. I found that I didn’t enjoy them as much as I enjoyed the main scenario. It’s worth noting that this add-on was created by a third-party, but was official sanctioned by Blood’s original developers.

Not long after Cryptic Passage, a second expansion was released. This time, the add-on was created by Monolith, the developers of the main game. I found this Blood Plasma Pak to be much more enjoyable that the previous add-on. Together, Blood and its expansions were eventually released in one package called: One Unit Whole Blood.

Blood was one of my favorite PC games upon its release. My friends and I spent many late night hours playing multiplayer death-matches. This game really catered to the multiplayer environment, and several of the deathmatch maps included with the Plasma Pak are still some of the best multiplayer arenas I have experienced. Sadly, these days it’s nearly impossible to enjoy multiplayer Blood due to both the lack of interest and the difficulty in running the game.

That’s right, at the time of this writing, Blood has not seen a proper conversion to Windows. Unlike Duke and Shadow Warrior, there’s no native Windows client for Blood. If you want to play this game, you’ll need to emulate through DosBox. Luckily, GOG.com makes this easy. They sell One Unit Whole Blood complete with DosBox integration. While this makes things simple for single-players, it still makes things very difficult for those wishing to play online.

All in all, Blood is a great game. In today’s world, its held back by aging technology, but its legacy still stands. If you really have the desire to play, the GOG version is the way to go. It features the complete game with all patches (except for the ill-fated alpha 3dfx patch… but don’t get me started on that). I still keep my fingers crossed that the game will eventually get the same treatment as Duke Nukem 3D and Shadow Warrior. 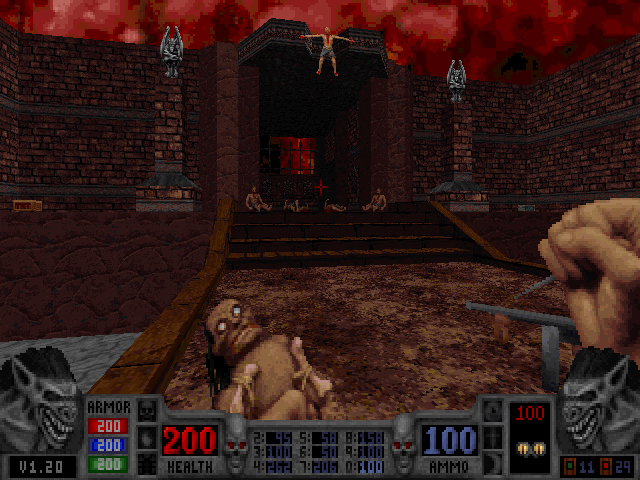 Story: Unlike most Build games, this game has a serious story. Most of the comic relief is situational. The storyline seems to be a blend of several common horror themes, with a little bit of “The Crow” thrown in for good measure. I like it.

Originality: If Duke was an action movie, and Shadow Warrior was a Kung Fu movie, here we finally have our Build-Engine Horror Movie. Motifs aside, the game does a pretty good job with feeling fresh. The backstory and environments presented in the game are very unique. I was enthralled with the title when it first game out.

Soundtrack: The in-game audio and soundtrack is appropriate for the environment. The tracks are very mellow and ambient. While there’s nothing particularly groovy, the soundtrack is very well done for this type of game.

Fun: I’ve been a longtime fan of Blood. The game is very enjoyable and has a quite a few “jumpy” moments. When you play, play in the dark, be prepared for anything. You never know what’s lurking just around that corner…. Atmosphere is key.

Graphics: The graphics in Blood are on par with Shadow Warrior but they seem to look more antiquated these days. Since the game has never received an official port, its pretty much impossible to play in modern resolutions This causes the game to retain its blocky visuals.

Playcontrol: Like many of these old games, the default controls seem a bit antiquated. There is customization available but it has to be done in DOS emulation and its not very user friendly. Also, the game wasn’t really designed with a mouse in mind so, the mouselook does not perform in a way that modern gamers would expect. If you plan to play, be aware of this up front.

Value: Blood is available on GOG.com for under $10. I have no qualms paying this price for such a fantastic game.

Overall score (1-100): 85 – Despite its age and flaws, I still love Blood. Its hard to recommend the game today because of all the work that goes in to just making it run. But in its day, it was easily my favorite Build game. That being said, if you’re willing to put in the effort, there’s nothing better to play this Halloween…

Other Reviews In This Series:   Blood – Blood II

Adult Swim & Crunchyroll have announced that Shenmue the Animation will premiere on Saturday, February 5: https://www.rpgsite.net/news/12249-shenmue-the-animation-begins-airing-on-february-5th

Here's what experts have to say about Microsoft's Activision purchase. Spoiler: It's really, really good news for Game Pass. https://www.windowscentral.com/heres-why-microsoft-made-nearly-70-billion-bet-gaming-giant-activision-blizzard?utm_source=wc_tw&utm_medium=tw_card&utm_content=90204&utm_campaign=social

Here’s how the video game industry is reacting to the Microsoft acquisition of Activision Blizzard: https://bit.ly/3KgT117

Here’s the full list of all 33 playable races that will be included in D&D’s new Monsters of the Multiverse book https://www.polygon.com/22889546/dnd-monsters-of-the-multiverse-pc-races-full-list?utm_campaign=polygon&utm_content=chorus&utm_medium=social&utm_source=twitter

Breaking News: Microsoft agreed to buy the video game maker Activision Blizzard for $68.7 billion, its largest takeover ever and a big bet on the metaverse.
https://nyti.ms/3GFQI5s

PlayStation 3 games have mysteriously been appearing on the PS Store - https://mspoweruser.com/playstation-3-games-appearing-on-the-ps-store/

It's January 18 in Japan. The original Etrian Odyssey for DS launched 15 years ago today.

ATLUS teased the development of a new Etrian Odyssey over three years ago: https://www.gematsu.com/2018/07/atlus-teases-the-next-stage-of-etrian-odyssey