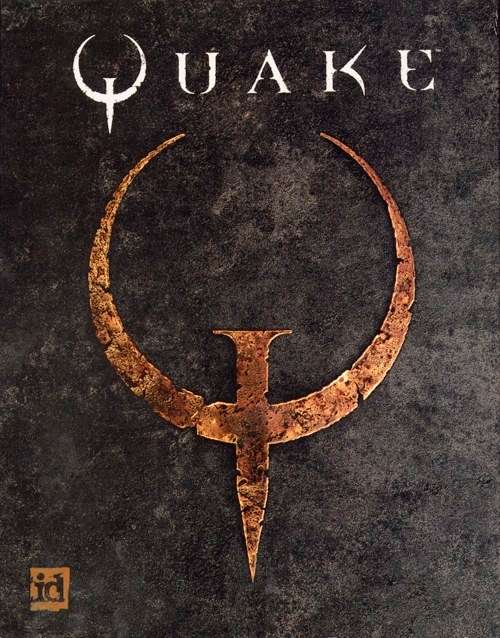 ***NOTE: Many of the technical parts of this review have since been made obsolete with the release of the Quake 25th Anniversary Update.***

A review of Quake. Where does one even begin? Quake is such an iconic title, no review I could ever give will truly do it justice. So I’m going to focus mainly on my feelings for the game, and its overall legacy. The breakdown at the end serve as more of a tit-for-tat review.

Quake represents a real paradigm shift in the world of PC Gaming. No longer was PC Gaming only for nerds, this is the game that took gaming to the mainstream. Quake was developed by the same team that gave us Wolfenstein and Doom. This is immediately obvious if you’ve played any of these titles. Quake is very much the next step up in evolution from Doom. Most of the Doom basics are here, a variety of weapons, upgrades, futuristic space-action and strange occult elements. But this time around there’s a more intelligent enemy AI, the controls have native mouselook and jumping, and the environment is even more atmospheric.

In this game, you play as an unidentified human soldier who is forced to face a legion of extra-dimensional creatures. Apparently the only survivor of an onslaught by these strange monsters, you must make your way from your overrun military installation, deep into the bowls of hell from which they came. The ultimate goal, to find the source of the invasion and end it. 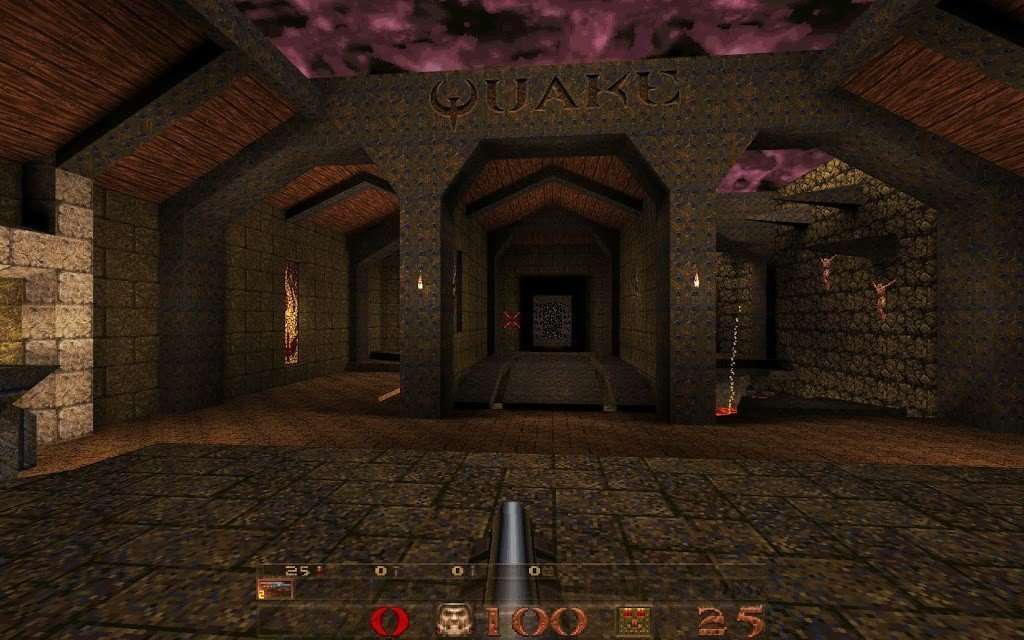 When Quake was originally released, it was a software-rendered DOS title. However, it wasn’t long before the game received a port to Windows and was given full GL accelerated graphics. The upgraded version, GL Quake is the title that most players are familiar with. Over the years, the game has been ported to nearly every operating system and game console. However, it is the PC version that we will focus on here. These days, the game is best experienced using a frontend called “Darkplaces”. This enhancement allows Quake to run smooth on modern hardware and features a variety of upgrades without comprising the integrity of the original game. This is the mod that I personally recommend.

As I mentioned earlier, there are two ways to play Quake; single player and multiplayer. While the First-Person Shooter Genre had been around for a few years by this point, Quake is really the one title that brought multiplayer to the forefront. Until now, most FPS games were played via LAN or modem-to-modem connection. Quake is really one of the first games to take advantage of the rising popularity of the Internet. Multiplayer through TCP/IP is one of the shining points of this title. In its prime, Quake servers were popping up all over the internet. There was even third party software released that allows players to locate and join existing Quake servers (Quakespy being one of the most popular). I spent many hours hunting my friends through various tunnels and arenas thanks to this title. 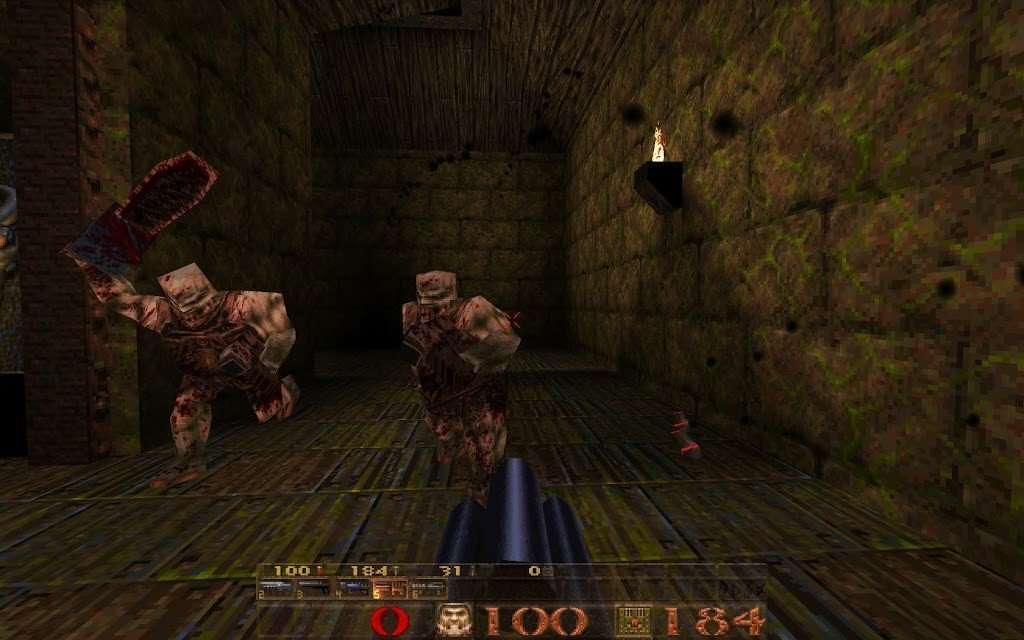 Despite its popularity, like all things, the attention of most gamers shifted over time. While Quake still sees a surprising number of online players, it’s not a popular as it once was. For this reason, most of my playthrough this time around was based on the single player campaign and the two official expansion packs.

It had been many years since I played through the single-player mode of Quake. I half expected to have my fond memories ripped away from me as I realized how dated the game had become. But I was pleasantly surprised. The game was just as good as I remembered it. Quake still held the same mystique and atmosphere that enchanted me as a young man.  Everything from the level design to the soundtrack still felt new a fresh. I was shocked. I can only chalk this conclusion up to the fact that this was really a game that was done right the first time. It still holds up even more than 10 years later.

The single player scenario is not long. It can easily be completed in one evening if you’re a fairly decent player. But as I mentioned earlier, the game was also built with multiplayer in mind, so for many, the single player mode was nothing more than a training ground used to hone the skills that would later come to good use in an online Deathmatch.

For those players who crave more, have no fear. There were two official expansions (or Mission Packs) released for Quake. These two add-ons together, add about thirty new levels total, a handful of new weapons and extend the story of the original game a bit (although not very effectively). As you might guess, they also included a number of multiplayer maps as well.

My frequent readers probably know that these reviews have so far served as my own personal trip down memory lane for the most part. This review is no exception. But regardless of my own nostalgia. Quake is one of those games that every PC Gamer should own and cherish. Regardless of what’s out there these days, Quake is classic. 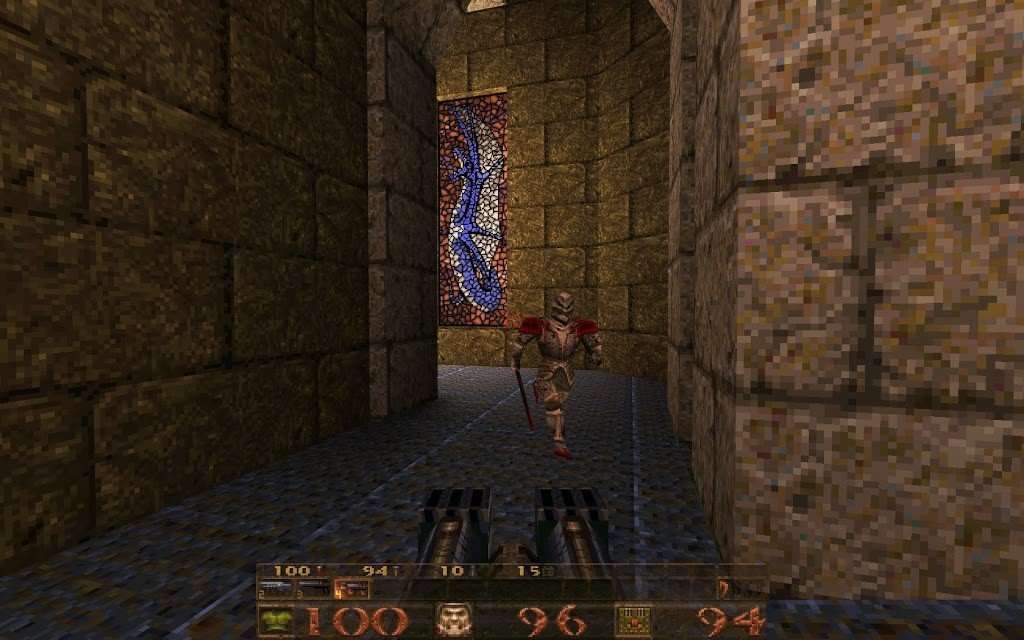 Difficulty: Variable–  Quake features several options for difficulty for the single player campaign. There’s even a couple hidden options for those really sadistic players. The difficulty options feel very appropriate. Of course, when you play online, the difficulty is strictly determined by the skill of the other players.

Story: The story for the game is semi-weak and mainly only found in the paper manual. In typical ID Software fashion, there are few blurbs as you complete the various chapters throughout the game. But If you want to know the backstory (what little backstory there is) you’ll need to read outside of the game itself.

Originality: As I mentioned in the overview, FPS games were nothing new. Quake manages to be original with its refinement of the genre and its excellent presentation.

Soundtrack: Musicwise, the game soundtrack was crafted by none other than Trent Reznor of Nine Inch Nails. The music is very alien and appropriate for the game. The Mission Packs also include new music tracks (not by Reznor, but are just as groovy and interesting). The environmental audio is also superb. Monster noises, weapon sounds everything is very well done.

Fun: Despite is age, Quake is still quite a bit of fun. I thoroughly enjoyed playing through both the main game and the mission packs. I was impressed both with how much I remembered about the game and how much I forgot. It was like rediscovering the company of a long, lost friend.

Graphics: For a game that started out as a software rendered title, the graphics actually manage to hold up well. The GL upgrade to the game really improved things. Today, with mods like Darkplaces, the game can run under modern resolutions and take advantage of some more modern enhancements that really help keep it look good.

Value: Quake is available for under $10 and it very much worth the price.

Overall score (1-100): 90 – I hate sounding like a fanboy, but Quake is a classic and it still holds up to the test of time. This is the game that started the online FPS craze, but don’t let fool you, there’s still a lot of fun to be found in the good old single player scenario. This is a title that I recommend to anyone. It’s a must have.