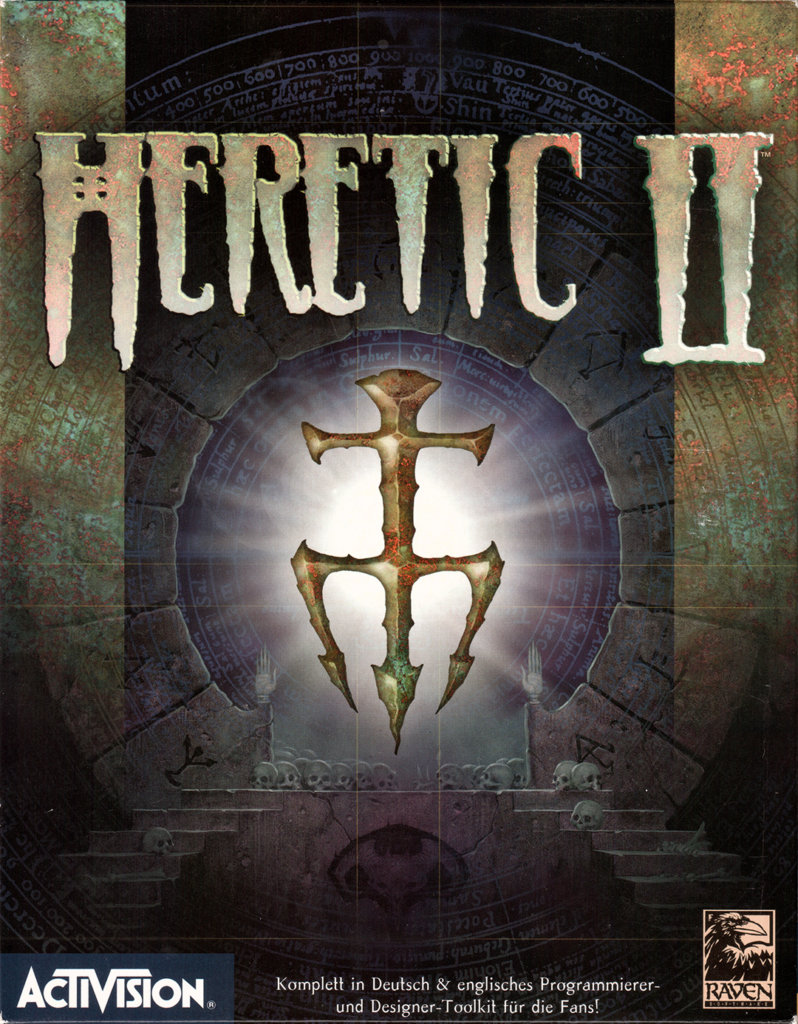 The Christmas cyclone has finally settled, so I’m going to take a moment to post another review. This time, for the often forgotten game, Heretic II. I actually played through this game earlier in the month, but I wanted to wait until a day when I had some extra time to properly put my thoughts down before posting the review. Today is the day.

Heretic II is the final game in the “Serpent Rider Series”. (Although there’s not a Serpent Rider to be found in the title). This game, as the title suggests, is the direct sequel to the original Heretic. The game begins immediately after Corvus’s victory in the original game. Upon returning to his homeworld, he discovers that the entire city has been infected with a terrible plague. To make matters worse, he soon realizes that he too is infected. His goal is to discover a cure for the disease – to rescue both himself and his countrymen. Of course, things are never quite that simple…. 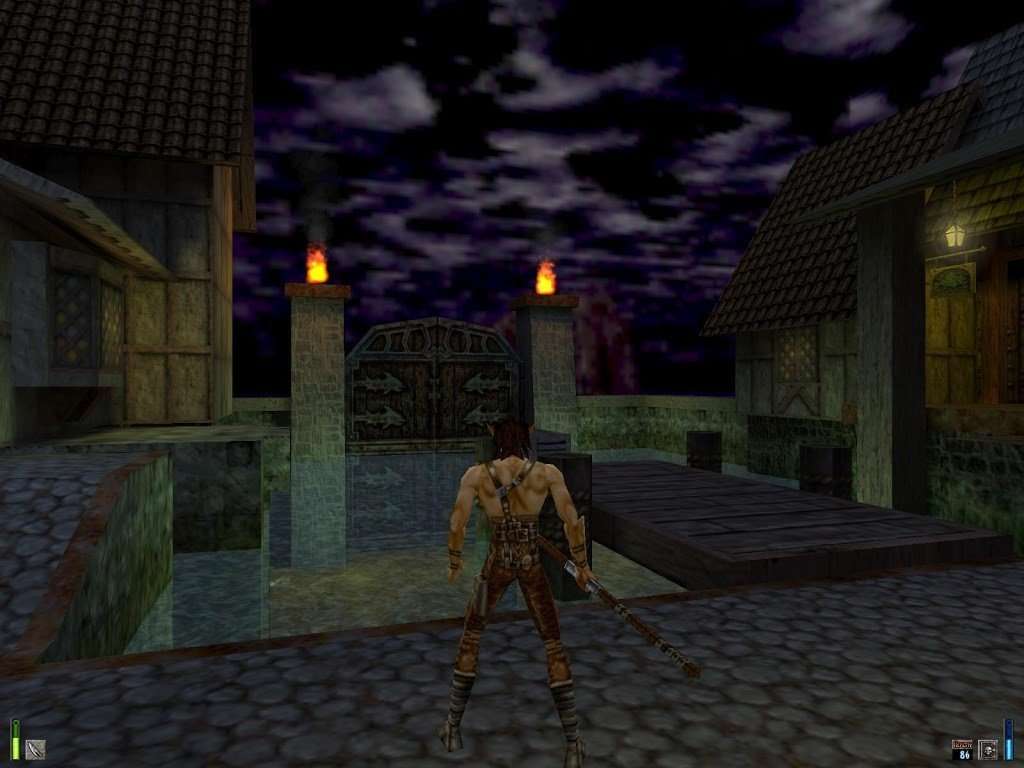 Heretic II is a strange game. It is built using the Quake II engine, but instead of being in a familiar first-person perspective, the game is actually in a third-person view. In many ways, Heretic II is very similar to Tomb Raider. There is a lot of ledge jumping, platforming and over-the-shoulder combat. So if you take Tomb Raider, put it in a fantasy setting, and enhance the visuals with Quake Engine graphics, you’ll have a pretty good idea on what to expect.

Upon its release, the game suffered from a number of bugs and missing features that were promised by the developers. It took several months for these issued to be addressed. Eventually, the game received a mega patch called the “Heretic II Enhancement Pack”. This bundle fixed many of the game’s issues. As well as offering more configuration options and multiplayer content.

Personally, until this review I had not played this game since it was originally released. I had a very difficult time getting the game to run properly. Even now, for the sake of this playthrough, I had to do a lot of tinkering and experimentation to get this game to operate with any amount of stability. Although once I got it working, all was well. 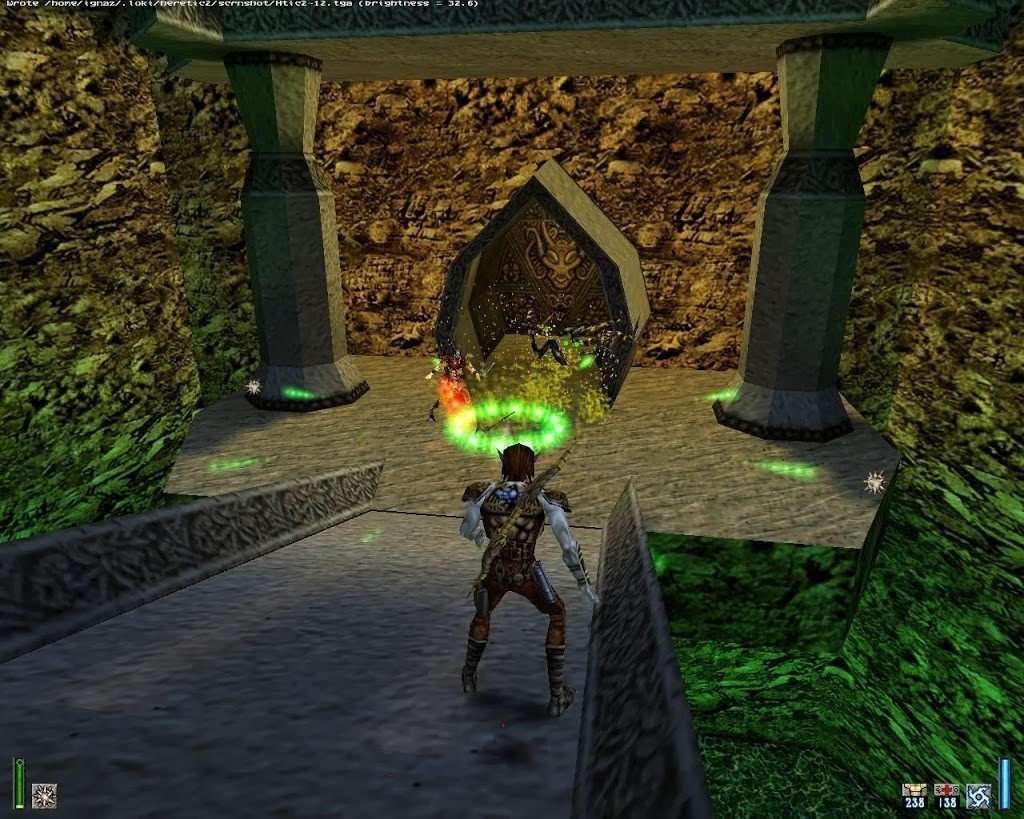 There is a of platforming in the game. But other than that it actually plays a lot like a first person shooter. There is a variety of weapons to choose from, as well as a number of spells and usable items. My biggest gripe with this game is its controls. It is just as “wonky” feeling as the first three Tomb Raider games, but in a different way. The camera controls actually work much better than Tomb Raider in my opinion, but the control scheme is funkier. Yes, you can customize the controls, but I could never find a setting that quite felt right.

Regardless of the playcontrol, the developers did a wonderful job on the game as a whole. The graphics were top of the line at the time, and very detailed. The dynamic lighting used for the magic effects are also very well done. The game features a pretty interesting story and actually helps to add a little depth to the Heretic/Hexen series. All of these things I found enjoyable. My only complaint was that the single-player game felt a little bit too short.

Luckily, the title does include multiplayer, but like many of these Quake-era games, it can be difficult to find an active community. Even in its day, Heretic II was a niche game with a small but dedicated group of online. The third-person perspective did make for a slightly different Death Match experience. I think I probably spent more time playing multiplayer on this title back in its heyday than I did on the single player scenario. I missed it this time around. 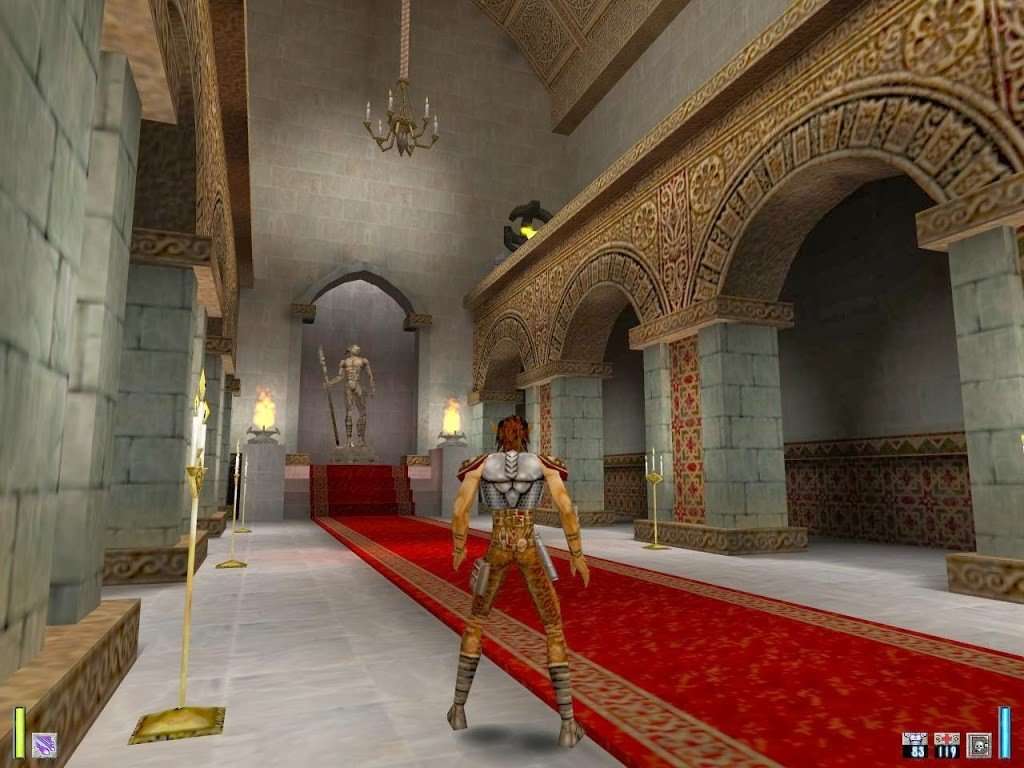 Difficulty: Variable–  The game offers three levels of difficulty. The first setting is definitely recommended for new players who are not familiar with the controls. Once you have the hang of things, you might be ready for a more intense level of play. There is also a tutorial. I cannot recommend this enough.

Story: Being a part of an ongoing series, it is refreshing to see a brave new chapter. The direction taken with this game does a lot to expand upon the lore of world. This is a game world that I would love to see explored further.

Originality: In the eyes of many, this game was a blatant attempt to ride the success of Tomb Raider. I have to disagree. I really feel like the developers were attempting to step out of the “first person comfort zone” and do something unique. Regardless about how you feel of the end result, it was certainly a bold step.

Soundtrack: The music included on the CD is very fitting and pleasant. Nothing that particularly stands out. Overall appropriate for the game.

Fun: I found this game to be fairly entertaining. I like fantasy games and the environment was fun to explore. But the game did have very odd feel about it that made it very hard for me to really get into fully.

Graphics: The graphics in the game pretty good. Some of the textures are bit blocky and rough, but the lighting effects and backgrounds are very well done.

Playcontrol: The controls are bit unusual but not too difficult to get the hang of. I still found them lacking from time to time. The camera is actually pretty good especially when considering when the game was original released.

Value: Finding a copy of this game is not easy. At the time of this writing it’s not available digitally and prices on eBay vary considerably.

Overall score (1-100): 60 – This game is interesting. Fans of the series may be interested in checking out the conclusion to the franchise, but most other will probably be inclined to pass this one by. I find it difficult to recommend this title to modern gamers.

Available today on: Currently not available. – (Updated as of Spring 2022)