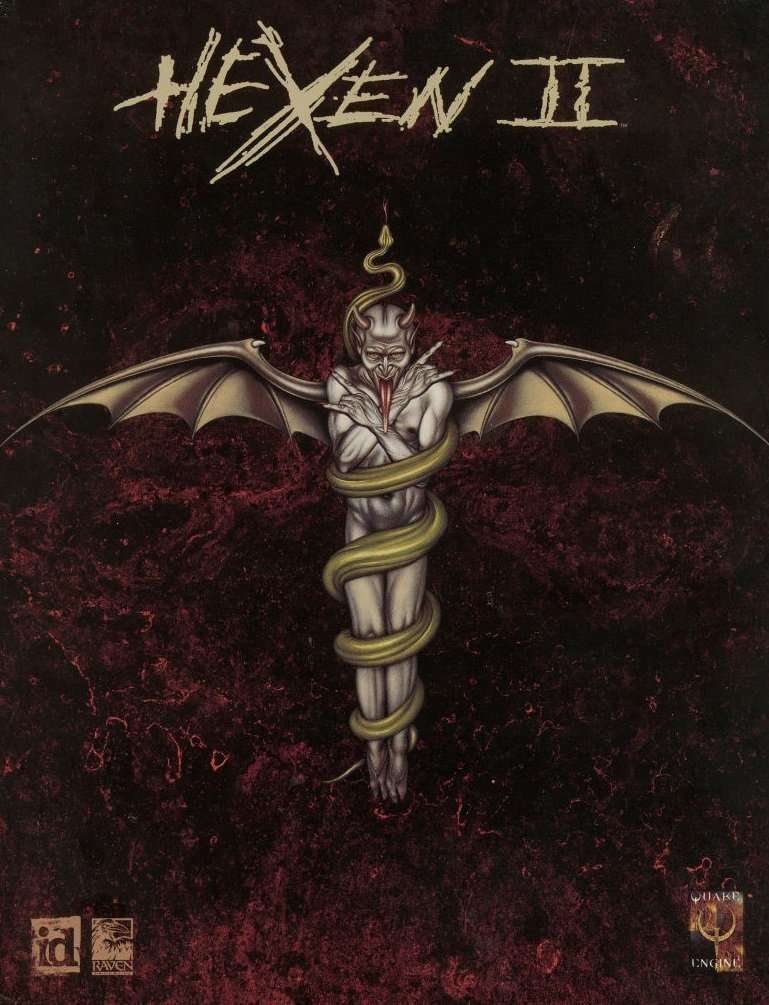 The next stop on the nostalgia train brings us to another game designed using the Quake engine and the third installment in the Heretic/Hexen series; Hexen II.

As I mentioned, Hexen II was designed using a refined build of the GL Quake engine. Aside from out-of-the-box acceleration, we also a few new features such as semi-transparent water, interactive and destructible environments and an enhanced HUD.

Playwise, this game is very similar to the original Hexen. The hub-style level system is back. So is the ability to select a character class at the beginning of the game. In Hexen II, you can chose between Paladin, Crusader, Necromancer and Assassin. An additional option, The Demoness is also added for the expansion, Portal of Praevus. 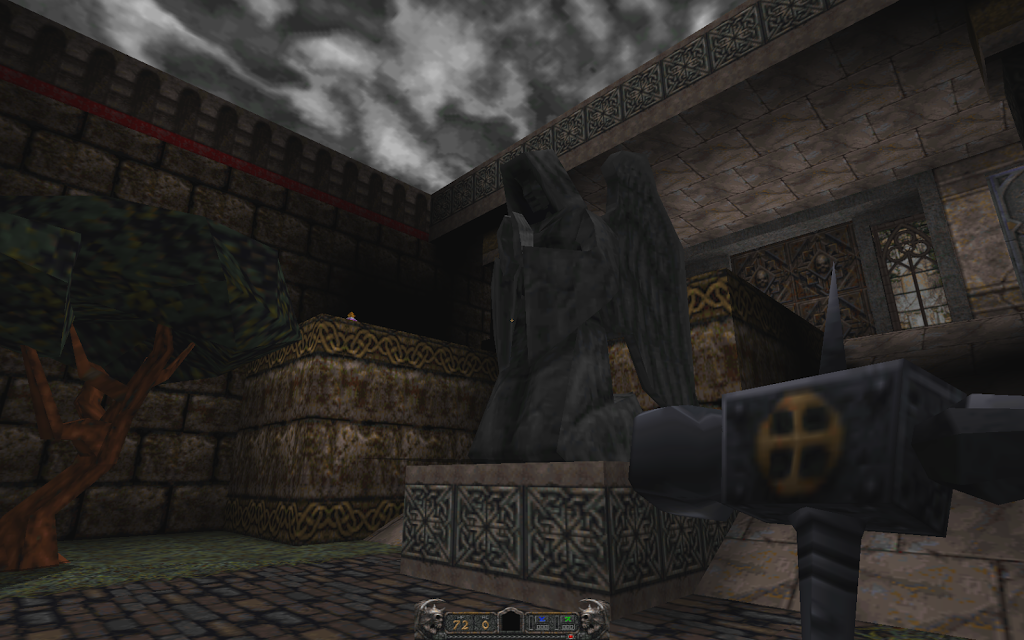 This game focuses on the world of Thyrion, home of the third and final Serpent Rider, Eidolon. This time around, the Serpent Rider has summoned forth the Four Horsemen of the Apocalypse. So naturally, these must be dealt with first. Each Horsemen resides of a specific region. So throughout the game you will experience a variety of terrains. The game starts out in a typical medieval European setting, but is followed by an Aztec or Mesoamerican region, an ancient Egyptian area, and finally an area that resembles a Roman or Ancient Greek setting. Once the Horsemen have been defeated, its time to confront the Serpent Rider himself.

A Mission Pack (expansion) was also released that features a new mega-boss and level hub to complete. In this scenario, an evil wizard known as Praevus is attempting to resurrect the Serpent Riders. So once again, the heroes are called into action. These levels are set in a Tibetan themed area. Also, as mentioned previously, the Mission Pack includes a new class option, The Demoness. 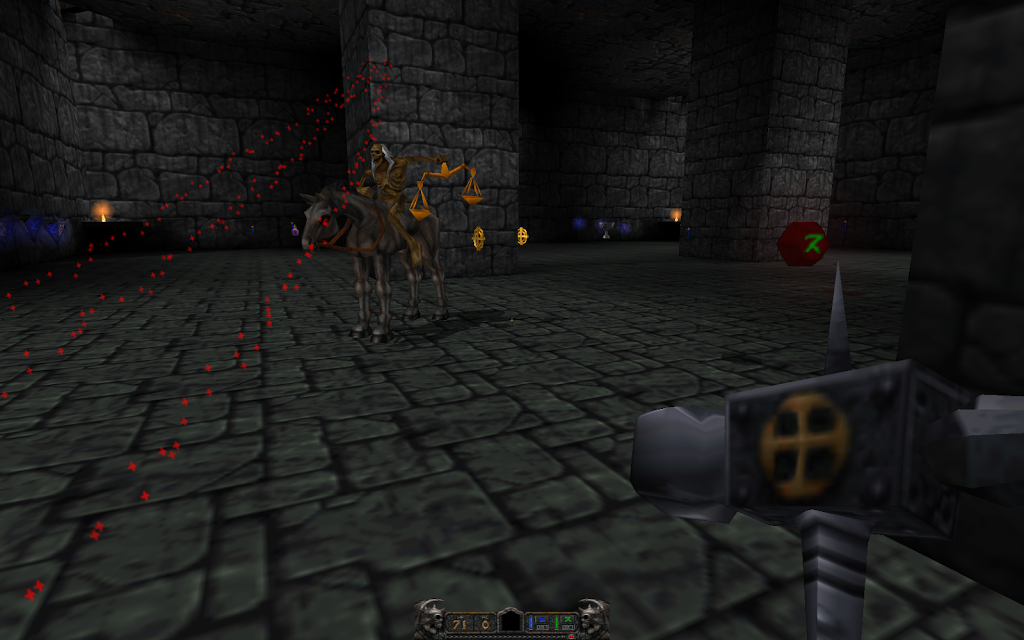 Hexen II certainly features enough single player content to be worth your attention. However, there is also multiplayer Deathmatch to keep things interesting. The ability to select a character class helps Hexen II stand out from most other early FPS online play, as each class plays a little differently.

In addition to Deathmatch, another mode of Online play called Siege was also later released. This mode featured an interesting twist to online play at the time, Team Co-Op.  Unlike some of the Capture the Flag mods that had been developed for Quake, Siege focused on the invasion and takeover of the opposing teams castle. During its heyday, I sent a number of nights participating in Siege battles. However, these days, the game gets very little attention in its old age. So unless you have a group of interested friends it may be a bit difficult to find enough people to enjoy this content. If you do plan to try your hand at online play with this title, be prepared to have both the original game and the mission pack installed. Most players that still participate in online play, are playing with the full experience installed.

Like many of these older games, it can sometime be difficult to get the to run well on modern system. Hexen II is no exception. Luckily, like many of these Quake-engine games, the sourcecode has been released and the gaming community has provided us with a solution. Personally, I recommend the Hammer of Thyrion version of Hexen II. This codeport allows for modern resolutions and also adds support for modern graphical effects. All this is done without modifying the original vision and mechanics of the game itself. The mod also includes support for the Mission Pack and Siege add-ons. For more information on this port, do a Google search for “Hexen II Hammer of Thyrion“. 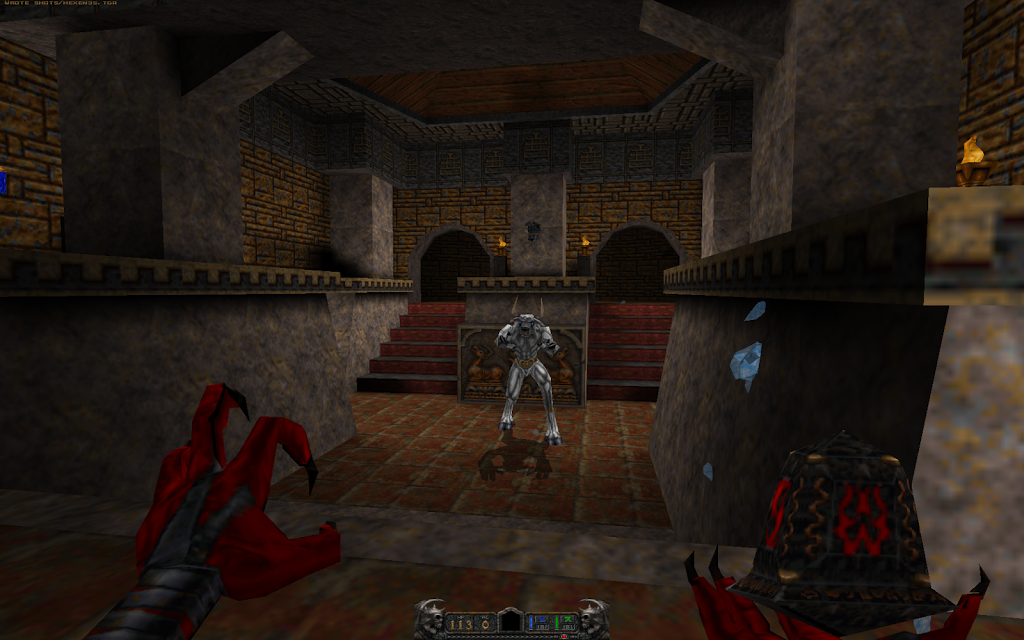 Difficulty: Variable–  Like Quake, Hexen II features several options for difficulty for the single player campaign. The difficulty options feel very appropriate. Of course, when you play online, the difficulty is strictly determined by the skill of the other players.

Story: This game is the conclusion to the story set up by Heretic and Hexen. For the most part, I found the background and set up for the game to be very well done. It felt like there was a little more thought put into the set up for this game than most other FPS titles of the age received.

Originality: At first glance Hexen II may seem like nothing more but Quake in a fantasy setting. But in reality, it is much more. The HUB system is back and even more complex than before. The decision to include regional themes always felt quite refreshing to me. Also, your character is able to level up over time and improve their stats. This is something I had never seen in an FPS game at the time. I feel the creators of this game really put forth an effort to fashion a game that felt new.

Soundtrack: If you happen to have the original CD ROM version of the game, there is some very good CD Quality music that accompanies the game. The level themes are fitting an appropriate. There’s even a throwback to fans of the first two games.

Fun: I found my playthrough of the title to be better than I expected. While the HUB system is interesting and adds a new level of challenge, I’m not really a fan of it overall. But in Hexen II, it seems to be a bit easier to handle that it did in the first game. By far the environments and level design were the most enjoyable aspect of the game.

Graphics: Today, the graphics are a bit dated but at the time Hexen II represented the finest in 3D acceleration. If you can get past some of the blocky texture and sharp angles, the game actually looks pretty good. Unlike some, I have no complaints. It is what it is.

Value: Available for under $10 without expansion. Currently the expansion has not been made available digitally. But, despite this, the price is still worth it.

Overall score (1-100): 85 – Hexen II is easily a four-star game for people that enjoy both FPS games and fantasy titles. It’s an odd mix of the two but it works well. Players who are just looking for carnage and are frustrated by puzzles may want to look elsewhere.