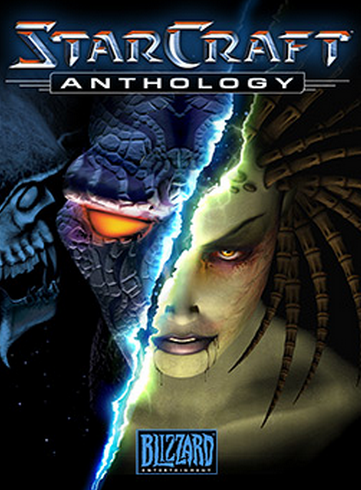 I’ve said it before and I’ll say it again. Real Time Strategy games are not my thing. But there are some so popular that you can’t afford to ignore. Just like WarCraft, StarCraft is one of those.

Cashing in on the popularity of the WarCraft franchise, Blizzard took their winning formula and changed it from a fantasy setting to that of a space opera. Instead of Orcs vs Humans, we now have Humans va Aliens. The game actually features quite a detailed backstory that centers on three various factions of creatures; The Humans (aka: Terrans), The Protoss, and The Zerg. There’s a single player campaign dedicated to each race. Each campaign provides a detailed storyline for each faction.

As far as gameplay goes, the game works and plays very much like WarCraft II. Anyone familiar with that title will have no problem picking up StarCraft. In each mission a set of goals is provided. Build this, train X number of troops, seek and destroy the enemy forces, etc. 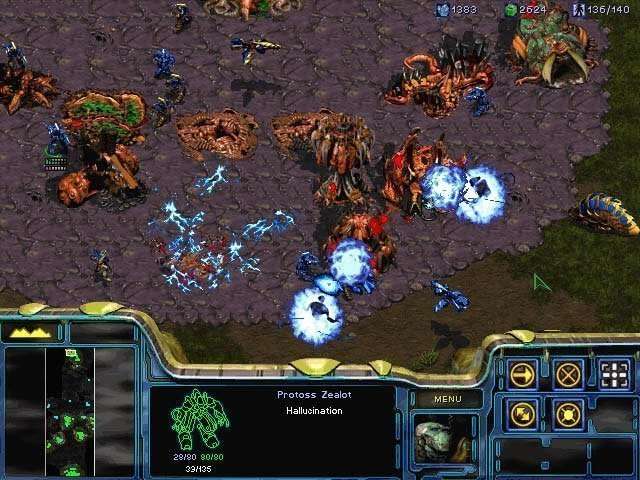 Personally, I find these types of games a bit boring and repetitive. It’s the “real time” part of “real time strategy” that bugs me. In this regard, StarCraft is no different. I still found myself sitting there, watching units harvest crystals or mine gas, waiting for the counter to get high enough so that I could build the next structure needed to proceed in the mission. To me, that’s a terrible experience. But It must just be me, people love these games. In Korea, for example, StarCraft’s popularity is legendary. It’s jokingly called the national sport. Players received corporate sponsorship and play for cash prizes. It is even broadcast on television. Seriously, it’s that big over there.

Despite my gripes about RTS games. I do understand the appeal. Just as far as I’m concerned, it’s not really my style. Regardless, I do have to admit that StarCraft features a pretty interesting story line that was enough to motivate me to keep playing. In this regard, the game seemed a bit better than Warcraft II.

Once you’ve conquered the main game, there is an expansion called Brood War. These days, the two are bundled together – so chances are if you’re playing StarCraft you already have Brood War.

In a nutshell, if you like RTS games and intergalactic conflict appeals to you, there’s really no better franchise than StarCraft. Even though it is not really my type of game, I can appreciate how well done it actually is. StarCraft is great game and it still holds up even after all these years. 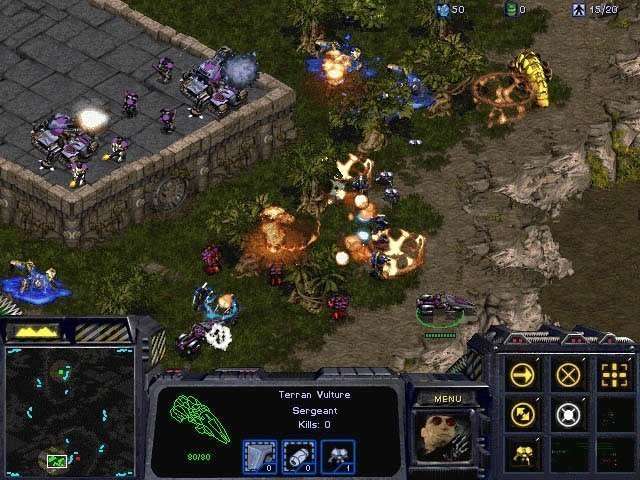 Difficulty: Medium–  The game starts out fairly easy and provides a good amount of tips and pointers to get you started. Of course, as you progress through the missions things do get a bit tougher. The later levels in the game can be quite difficult and even pretty long. But if you’ve made it this far, you probably know enough to conquer most anything. Multiplayer however…. There are two difficulty settings; Normal Humans and Koreans. You’ve been warned.

Story: The story is told quite nicely both through cutscenes, mission summaries and in-game chatter. What starts out as a cut and dry “us vs them” scenario soon becomes more complicated and is actually quite epic by the end. It can be tricky to integrate good story telling in these types of games, but Blizzard did a pretty good job here.

Originality: At first glance is seems like StarCraft is really nothing more than a reskinned WarCraft. But once you get your hands dirty with the game, you soon realize that it’s certainly its own beast. Refinements and good storytelling elements really help the game shine above its predecessors.

Soundtrack: Surprisingly, this game features some really really good background music. The tunes are fitting and do a good job of passing the time. Sound Effect-wise, the game has some of the same annoying and repetitive feedback after each action that WarCraft did. But, I suppose it’s a necessary evil.

Fun: If RTS games are your cup of tea, there’s hours of fun to be had here. The masses have spoken and StarCraft is a winner. Often hailed as one of the greatest PC RTS games of all time. Personally, I found the game to be much more enjoyable that most other games of this type, but it still isn’t really my bag.

Graphics: For not being accelerated, StarCraft looks pretty good. In a weird way, a lot of the game art has a very Diablo feel to it in terms of art-style and graphics. The game certainly shows its age, but it holds up very well.

Playcontrol: These games are played primarily using the mouse alone. StarCraft doesn’t seem to experience some of the wild-scrolling that really bugged me about the WarCraft titles. I feel like the UI and overall control scheme here is much more refined than Blizzard’s older RTS game.

Value: Both the original game and the the Brood War expansion are sold on Blizzard’s online store as “Starcraft Anthology” for $15.00. This is a bargain for RTS fans.

Overall score (1-100): 75 – I know a lot of people will rake me over the coals for not giving this game a perfect score. But for me, the game just didn’t achieve that “perfect” experience. I’m really trying not to look at the game with a prejudiced eye, and I still feel that maybe a bit more could have been done improve the overall experience. But compared to WarCraft II, StarCraft certainly show that Blizzard had their sights set in the right direction.