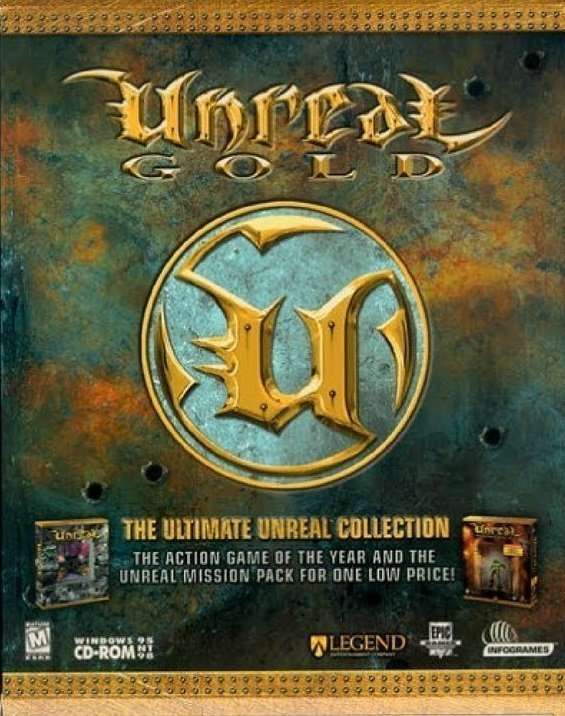 This is a review I’ve been looking forward to. Since I started going through my PC collection, I’ve been eagerly waiting to discuss Unreal. Well, I’ve finally reached that point on my “to play” list, so I’ve dusted off my copy of this fantastic game. Unreal is an interesting beast. It came out during the height of Quake’s reign of dominance in the FPS market. I remember there being a lot of hype over this game when it came out. Friends of mine were rattling off all of these random “facts” about the game with looks of sheer awe on their faces. You see, Unreal shipped not only with the game, but also with a fully functional level editor. One friend of mine in particular was fond of spewing rumors he had heard about the editior; “I hear that real estate companies are using it to design virtual walkthroughs for clients! It’s POWERFUL! It’s going to replace AUTOCAD!!!” Rumors and anecdotes aside, the game looked beautiful and the level design was indeed very well done. As a result, Unreal certainly gave Quake a run for its money. But to be, releasing the game with a level editor didn’t really factor in to my personal experience. I’m more of a player, not a designer.

Unreal did manage to awe me when I experienced it for the first time. Even today, playing through it again, it’s still a beautiful game. This was the first game I played that featured things such as detailed textures, and curved/reflective surfaces. The game’s engine certainly marked a major turning point in PC gaming. It is important to note, that the technology of the Unreal engine is still maintained and thanks to the community there are resources and unofficial patches (ie: 227i) that allow the game to shine even on modern hardware. 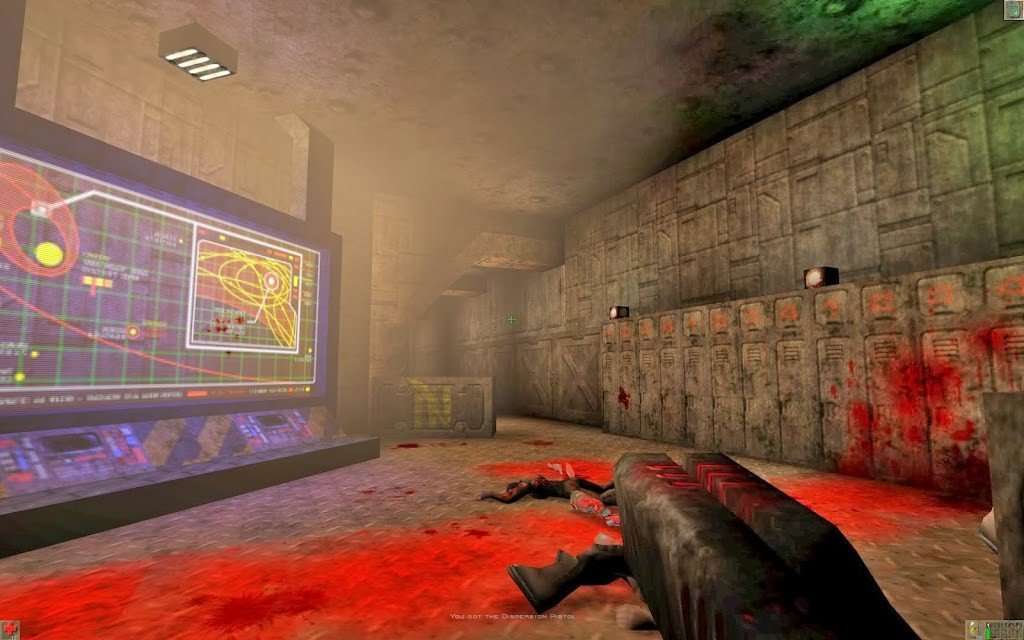 In Unreal, you play as Prisoner 849. A convicted criminal aboard a prison-transport ship known as the Vortex Rikers. While en route to the prison moon, the ship crash lands on an unknown planet. The game begins shortly after the crash landing when you wake  up in your cell – all hell is breaking loose. As you wander about the ship, it soon becomes obvious that the ship has been boarded by some rather malicious aliens. With only the thought of survival, you make your way out of the ship and into the alien world hoping to find a way off the planet.

Throughout the game, you get to explore a variety of environments. You have interactions with both friendly and hostile alien monsters. I don’t want to reveal too much and spoil the game, but it wise to pay attention to your surroundings and to make sure that the target in your sights is actually a bad guy and not someone who might be able to lend you some assistance. For me, this type of interaction really added a lot to the FPS genre. The beautiful scenery, audio and amazing AI of in-game characters were refreshing 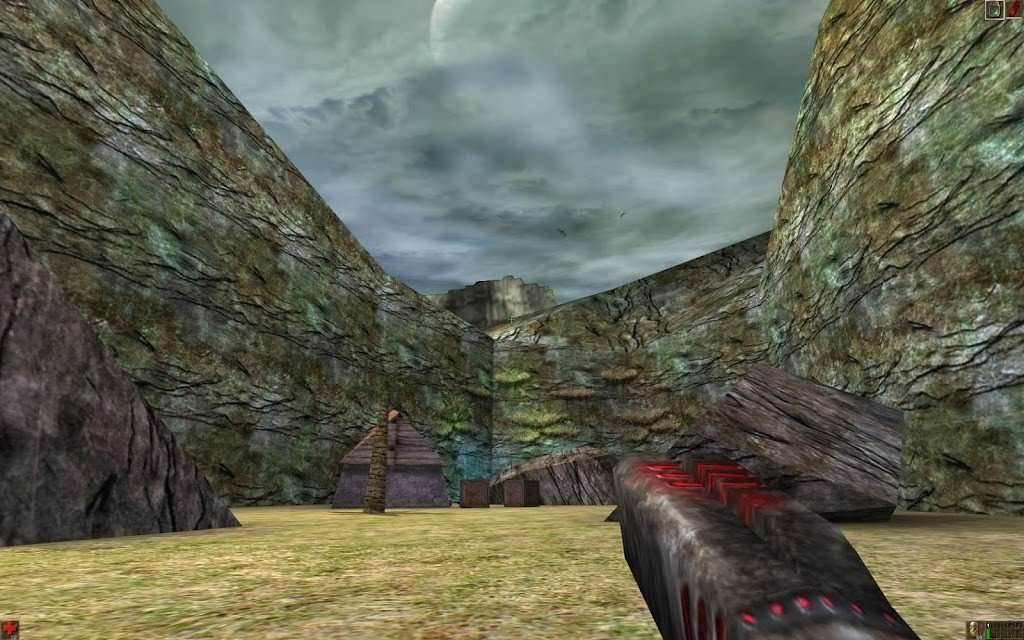 The game was quite a success upon its release and spawned an expansion pack called The Return to Na Pali. In this scenario, your character is forced to return to the planet and given a task that, if successful, is promised to lead to a full pardon. The expansion adds new levels and weapons and does a good job at expanding the story, but other than that it offers little in my opinion. These days, both the original game and the add-on are sold together in the Unreal Gold collection. This is the only way to go.

Unreal does include multiplayer but it is largely ignored. Even when the game was new, my friends and I had a terrible time getting multiplayer to work well. We were plagued with connection errors and lag spikes. These days, there are other Unreal games that focus on multiplayer – so the online community for this title is nearly non-existent. 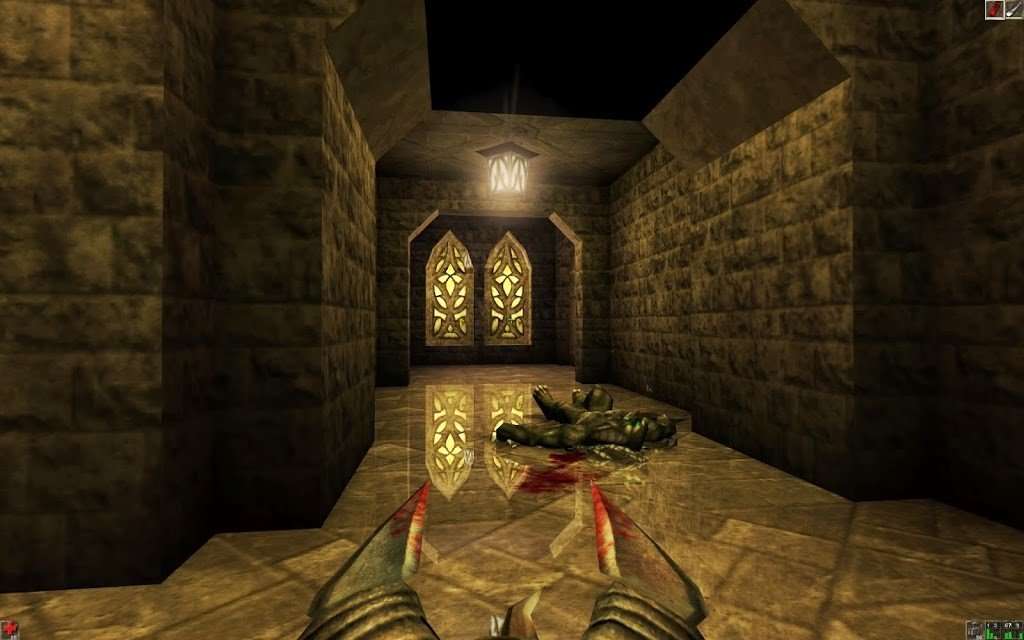 Difficulty: Variable–  Unreal offers multiple difficulty settings. This is really where you can see the advanced AI shine. On the lowest setting, the monsters seem pretty dull and dim witted, but on higher settings… yeah. You don’t really stand a chance. There’s something for everyone here.

Story: The game had a brief synopsis written up in the manual, but you really don’t need it. Even without reading anything, it becomes obvious pretty quickly what’s going on. The story is told through the environment and series of events that you experience while you play. This is exceptionally rewarding if you take your time to explore and read the pop-ups from your translator device.

Originality: When this game was released it was getting difficult to be original in the FPS market. But Unreal managed to stand out with some really advanced technology for the time. It’s obvious that a lot of care and thought was put into the game. Everything from the graphics, to the level design, weapon design and AI were really top of the line. Even today, many aspects of the game rival modern releases.

Soundtrack: The music for the game is alien and wonderful. A lot of the game features a very dreamy synthetic sound. I found the music to fit very well. But better than the music is the ambient noise. This is obvious from the very first level. You wake up in your cell to the sounds of alarms, explosions, and distant screams all in surround sound (if you feel so inclined).

Fun: If you look at this game as single player experience, it is fantastic. The multiplayer, not so much. I enjoyed this game way more than expected to, both at release and even today.

Graphics: Absolutely top of the line in its day. There was nothing else that could rival Unreal when it was released. Even for several years after, the code kept being improved and expanded. Today, the game shows its age a bit, but even now it still holds up surprisingly well.

Playcontrol: The original PC controls defaulted to a funky arrow-key driven scheme. But this is easily customized to the modern mouse and keyboard standard.

Value: Available online for around $10. This is a great deal for both the game and its expansion.

Overall score (1-100): 85 – Even despite is poor network coding, I have to give Unreal a high rating. The single player scenario is amazing. If you’ve never played this title, do yourself a favor and grab it the next time you see it on a Steam sale. When you play it for the first time, turn off the lights and turn up the volume. You’ll be in for a treat.