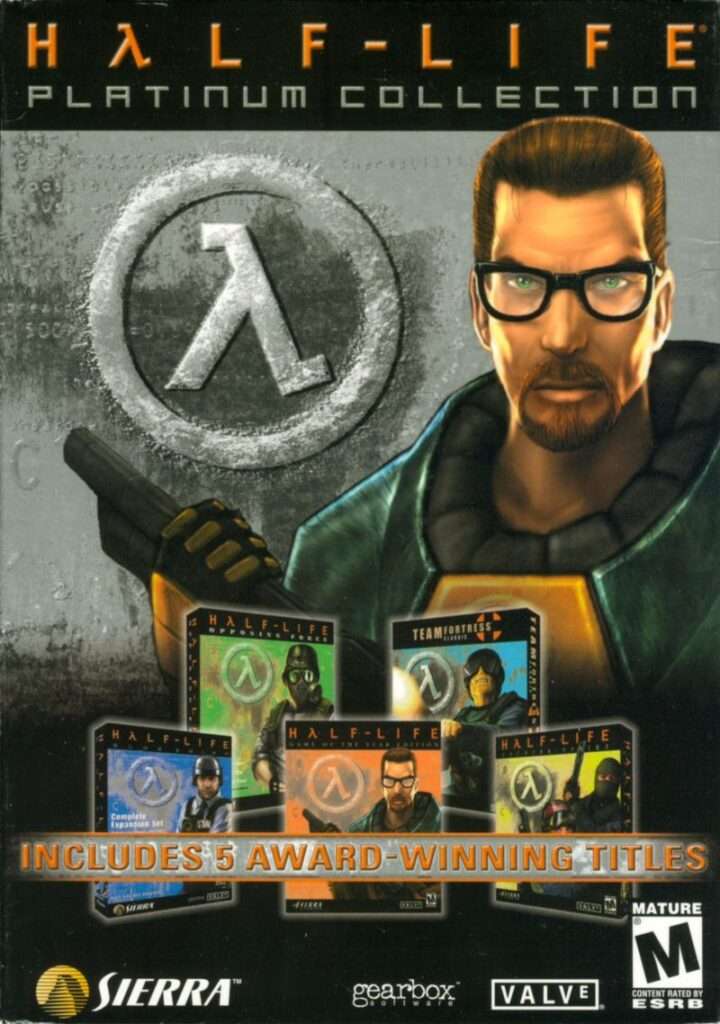 This is a review I’ve looked forward to for a while now. Half-Life is one of those types of games that doesn’t come along very often. It wasn’t an easy decision, but I decided to lump Half-Life and its many spin-offs together in one review. For this reason, the format of this review may differ a bit from some of the others.

Half-Life was a game originally released in 1998 by a then little-known company named Valve. The game received much hype in the months leading up to its release and for the most part lived up to the high expectations. The game was developed using a modified version of the original Quake engine and despite being released in the era of Quake II, Half-Life managed to hold its own in the ever growing arena of the FPS titles.

The game focuses on the story of a research scientist named Gordon Freeman. The game begins as Freeman is riding the employee tram into his workplace. Arriving a bit late, Freeman dons his hazmat suit and prepares for another regular day at the Black Mesa Research Facility. We soon learn that Freeman is a scientist working with anomalous materials, and when what should be a semi-routine experiment goes awry, Gordon finds himself temporarily teleported into a strange alien environment. After passing out briefly, he wakes up back in lab only to find all hell breaking loose. It soon becomes obvious that there was more than meets the eye when it comes to the experiments conducted at his place of business. Alien entities are swarming the facility, equipment is malfunctioning and the sheer chaos has taken hold. 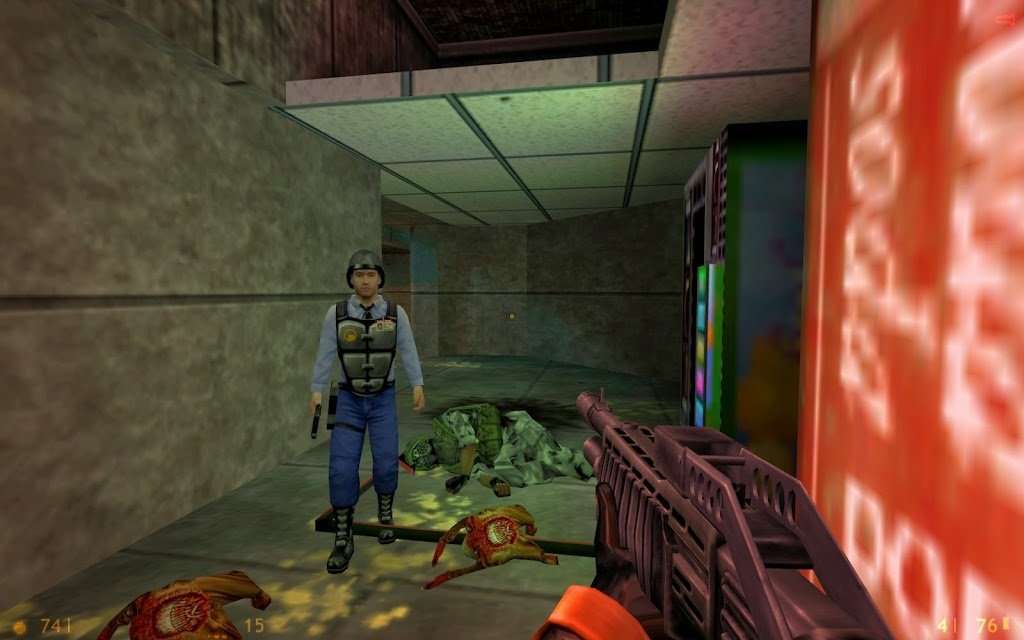 What begins as a plan to escape the facility, soon turns into a fight for survival as black-ops military show up and start slaughtering all survivors. You control Gordon Freeman in his quest to beat all odds against both alien forces and a hostile military. Together with other survivors, Gordon must fight for his life.

For the most part, the game plays very similar to most other FPS games of the era. There’s a wide variety of weapons to choose from, interactive environments, friendly NPCs, and puzzles to solve. However, unlike most other games Half-Life is more about survival than simply shooting your way through everything. Many of the big boss monsters in the game cannot be defeated with normal weapons, but instead are conquered using the environment in creative ways. NPCs are needed to unlock checkpoints or to help access certain areas. This was also one of the first FPS games I played that features full voice acting incorporated into the game itself. What really makes this game unique is the way the story unfolds. There are no cutscenes per se, everything is experienced through the eyes of the player. It is the level design and environment that really makes Half-Life stand above the competition. 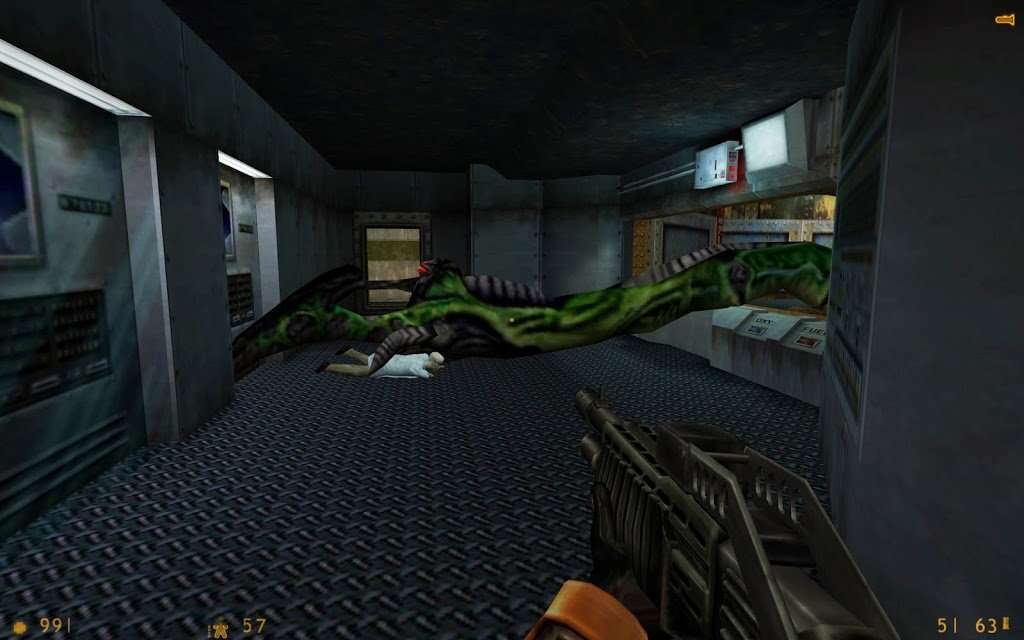 Aside from the single player campaign, there is a Multiplayer option included in the game. But these days, “vanilla” Half-Life multiplayer is nearly non-existent. Instead, there’s a plethora of mods and other multiplayer spin off games that take most of the attention. More on this later.

The first expansion to Half-Life came with the release of Opposing Force. Instead of being a continuation of the original story, this chapter is seen through the eyes of a soldier tasked with “cleaning up the mess” that is Black Mesa. However, when his own team becomes attacked by Black-Ops, his mission shifts from following orders, to survival. The add-on brings a few new weapons as well as some multiplayer modes. But it really stands out as a single player scenario.

I never played this add-on during its original release, so I’m experiencing it for the first time with this review. I have to say, I really enjoyed it. I felt it was right up there with the main game in terms of quality. The “boot camp” tutorial alone is worth the purchase.

The second add-on is called Blue Shift. In this chapter, we experience the Black Mesa events through the eyes of one of the facility’s security personnel. Arguably the weakest of the expansions, this is the scenario that brought HD textures to the game. So for this feature alone, the pack was worth obtaining. 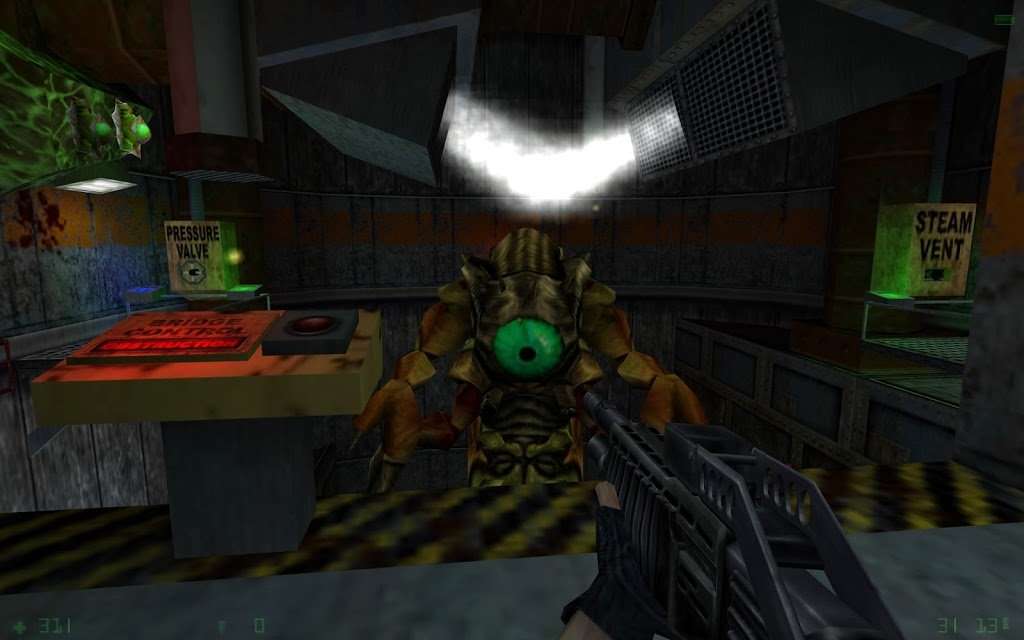 Like most other games of the time, Half-Life and its expansions were originally released on physical discs and were available at retail locations. These days, the games are available primarily through Valve’s digital content store known as Steam. Back in the day, I owned physical copies of Both Half-Life and Blue-Shift. Shortly after the release of Steam, I was able to convert these retail copies to my Steam library using the CD Key included with the game. By doing so, I was given all of the official expansions as well as several popular mods. Today, the whole suite of Half-Life games are available for a very affordable price.

Included in the Half-Life game suite are the following games or multiplayer mods:

Each of these titles started out as a mod for either Quake or Half-Life, but received enough support to be considered separate titles. Each is now available for individual purchase on Steam and still receive plenty of support and activity.

My honorable mention here is Counter-Strike. While originally starting out as a simple multiplayer mod, CS quickly blossomed into its own game. One that really deserves its own post and review here, but I’ve ultimately decided to hold off and review a later release of the game instead.

Counter Strike is a team based multiplayer arena. In this game you choose between either terrorist or counter-terrorist forces. Each team has a goal that must be completed during the match. The winning team is awarded with virtual money that can be used for new weapons, etc. The game became so popular, that in many circles its almost considered a virtual sport. There have been several re-releases and enhancements of the game. These I will cover separately in later reviews.

I spent many hours and late nights of my youth playing Counter Strike and it was nice to revisit this game for the sake of my playthrough and review. However, during my stint through the game this time, I found most of the players to be foreign and difficult to communicate with. Also, I encountered quite a bit of online cheating. So unless you’re playing with friends, it may be better to stick with some of the newer versions of the game.

All in all, the Half-Life suite is well worth the time of any PC gamer. It’s important to note that the game was also released on the PS2, and even included an extra very short addon by the name of Half-life: Decay, but this port does tend to suffer from play control issues as well as degraded graphics. For this reason, I highly recommend the PC version over all others.

Half-Life alone is worth the price Steam charges, but if you’re frugal, you can often get the complete Half-Life collection on sale. I definitely recommend taking advantage of such a deal if you do not already own all of  these titles.

For simplicity sake, the breakdown below focuses mainly on the main scenario. However, for most part, what applies to Half-Life easily applies to the expansions as well.

Difficulty: Variable–  Half-Life offers three levels of difficulty. The game also features a special tutorial level that helps even the novice gamer get familiar with the controls. Overall, I found the difficulty levels to be appropriate. However, if you plan on tackling hard mode, be prepared for lots of saving and restoring.

Story: The story behind Half-Life is really one of its stronger points. The way the scenario is presented, and the way it is told through the eyes of the character almost make the Black Mesa Incident believable. Half-Life really helped to pave the way for storytelling through play.

Originality: Despite being a Quake-based FPS, Half-Life was a breath of fresh air to the genre. The style of play, the storytelling, and even the seemingly open-ended support of the mod-community was really something almost unheard of at the time. The legacy continues to this day.

Soundtrack: The music in the game is sparse, but occasionally there is some event-prompted background music. For the most part, the audio is environmental and very well done.

Fun: I forgot how much I enjoyed this game. Despite being a behemoth of a playthrough, I enjoyed all of the titles discussed in the review above. Of everything I played over the past couple weeks, the main scenario and Opposing Force are must have for single player FPS fans, while Counter-Strike is my recommendation for those that prefer online play.

Graphics: Upon release, the game was mixed bag graphically. The Quake engine was beginning to show its age, but this largely rectified with the release of the HD Pack that was included with Blue-Shift. This brought better details for both the weapons in the game as well as the character models. These days, the HD pack comes built in regardless of version.

Playcontrol: Half-Life is the first FPS game I played that featured the now default WSAD keyboard + mouse control scheme. This is a setting that I find to be intuitive. Regardless, the controls are still customizable, so whatever you prefer, there is no real issue. My only gripe with the game is that some of the jumps and climbing feel a little inaccurate. However, this is easy to work around.

Value: Half-Life is typically available for around $10 on Steam. The expansions are sold separate for about $5.00. However, these times are on sale very often. Regardless, they are well worth the standard price.

Overall score (1-100): 100 – Even if we’re only talking about the core game, Half-Life is easily a top title. This doesn’t change when combined with the add-ons or other scenarios. In my opinion, this game ranks right up there with Doom and Quake as an iconic PC title. It is a must have. The same can be said for Counter Strike.