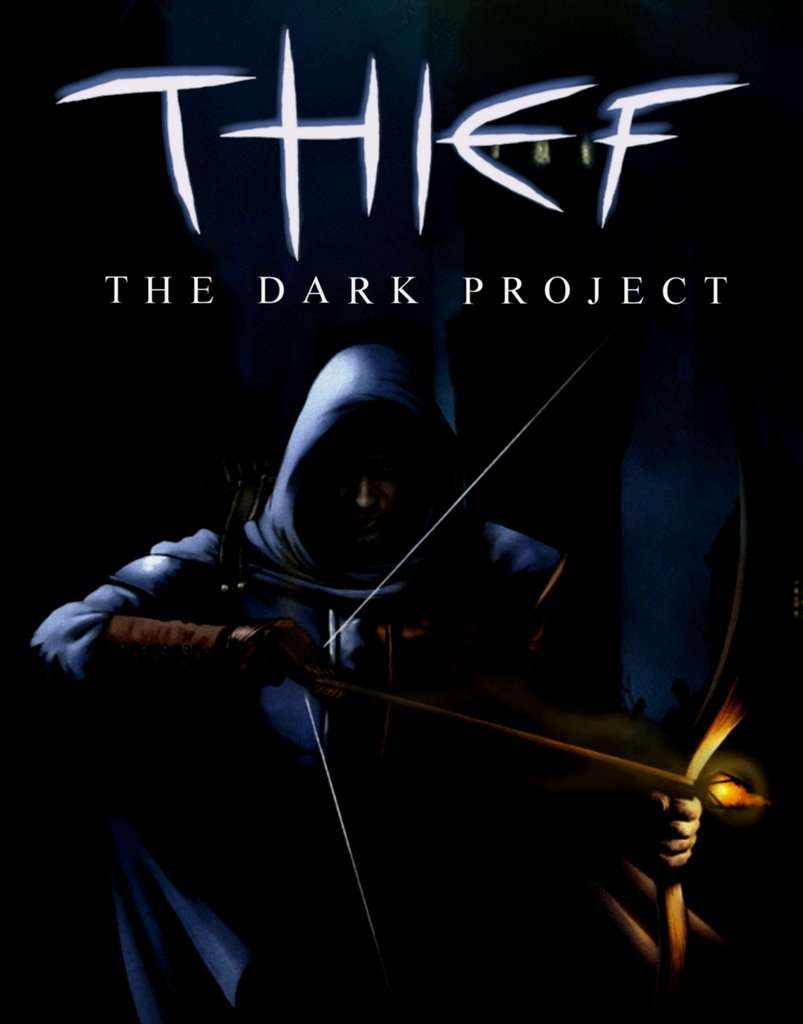 In this game, you play as master cat-burglar, Garrett. Once a penniless child from the streets, Garrett was taken in by a mysterious order known as The Keepers, and taught the secrets of stealth and skullduggery. Now, after having left the order, Garrett makes his living by burglary. Taking jobs where he can find them and living off the profits. The game starts out in this manner, but it soon becomes obvious that there’s more than meets eye going on behind the scenes – and Garrett has become entwined in a situation more dangerous than he ever expected. 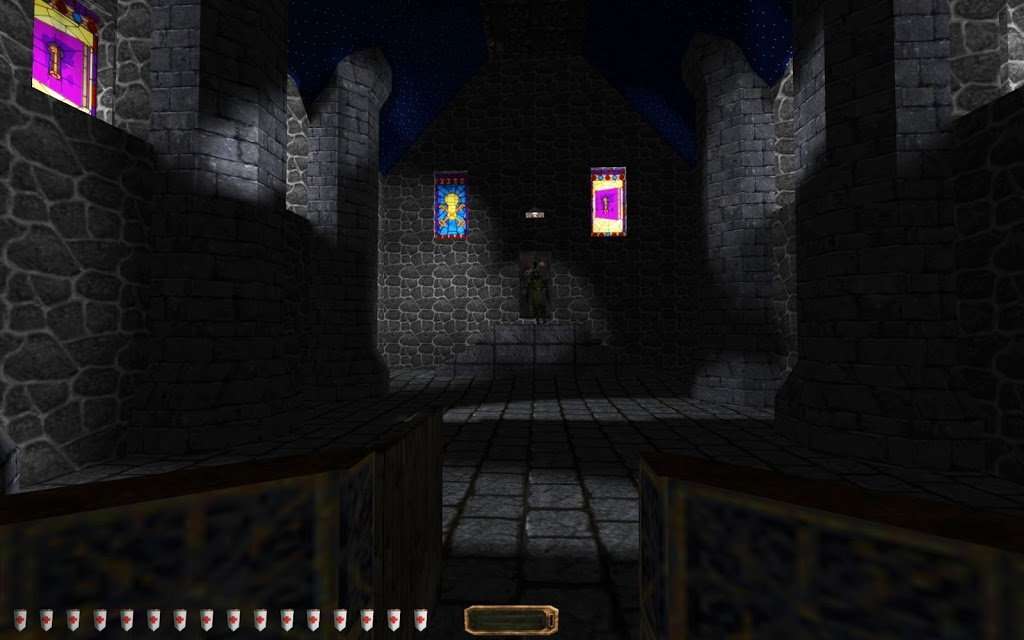 As I said earlier, the game may look like your standard FPS, but nothing could be further from the truth. Thief is a game best played late at night with the lights off and a lit candle on the desk. (Trust me. I tried it!) You must try to stay in the shadows to avoid being seen by guard patrols as you sneak your way into wealthy estates to rob the owners blind, or into heavily fortified prisons to bust out your friends. There are tools to help you on your way: lock picks, a blackjack, and arrows with tips covered in water pouches – to extinguish torches. (Just to name a few). Instead of killing your enemies, its often best to knock them out or distract them in order to sneak by. Your mission is to get in and get out without invoking alarm. Needless to say, this makes for some exceptional game play. To get a feel for what we are talking about, think of the gameplay elements of Metal Gear but set in a world more reminiscent of Hexen.

Each level provides you with a set of goals which must be obtained to complete the stage and progress within the game. Sometimes, this is as simple as sneaking into a location and stealing a specific item. Other times, there are additional requirements. The number of objectives can also increase depending on the difficulty setting in the game. Aside from the main requirements, the game encourages exploration by placing valuable items throughout the level which can be looted. Money earned can be used in between levels to buy extra supplies, so this does have its benefits.

I was fan of this game back during its original release, and playing it today I am reminded why. The atmosphere created by the game is still mysterious and exciting. For this playthrough, I tossed out my old CD ROM and played the GOLD version of the game I caught on a Steam sale a few years ago. Thanks to a healthy mod community, there’s a number of unofficial patches to make the game perform well on modern hardware. The GOLD version of the game includes everything from the original release, plus a few extra levels to help flesh out the storyline. I found these to be a nice addition to the game I played many years ago.

Thief spawned two sequels, which I sadly have not ever played and next month a reboot of the series is being published, which I do plan on playing. I’m interested to see how the concept is carried over in the new release and I fully intend to buy the game at launch and post a review in short order. As for the sequels to the original: I’ll get around to them sooner or later 😉 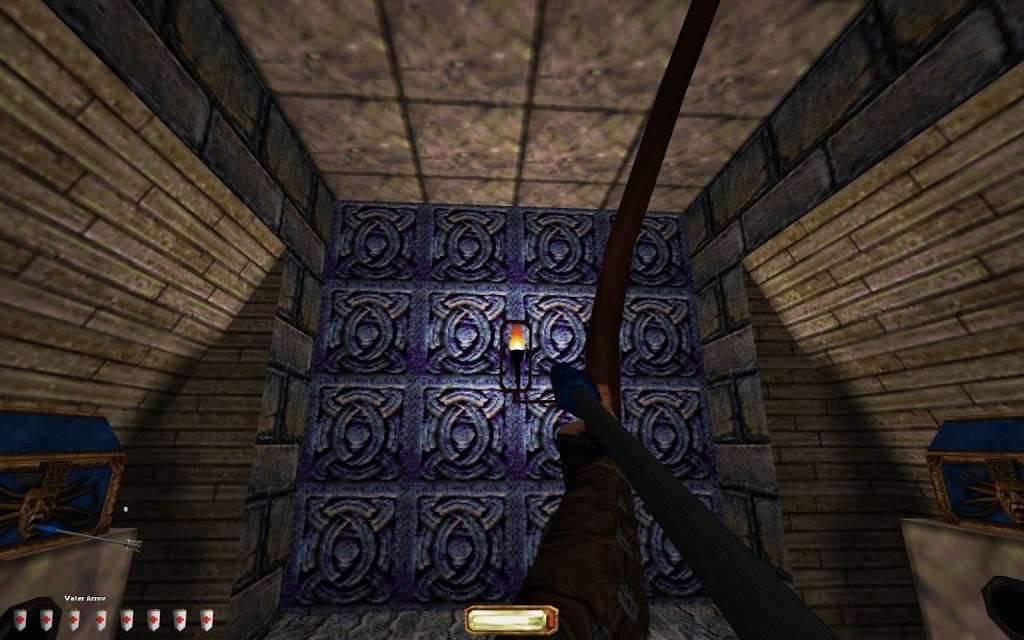 Difficulty: Variable–  Like many games Thief offers multiple difficulty settings. Normally, I suggest sticking with whatever setting you find comfortable because in most games, aside from the difficulty of the game, not much else is affected (as one would expect). In Thief, this is a bit different. This game is one of those rare exceptions where I actually suggest playing on a higher difficulty level. In this game, there are more objectives to fulfill in hard-mode and this often helps provide a little more detail into the game world. If nothing else, I recommend playing through the game on a lower settings and then revisiting it in hard-mode once you’ve got your feet wet. I think you’ll thank me later.

Story: The story of Thief is very rich and well done. It unfolds both through cutscenes presented between missions as well as through clues and items found in-game. Sometimes, you’ll even catch a bit of chatter from NPCs while sneaking through various areas. All of this makes for a very unique and interesting game world. The lore in this game is flawlessly presented.

Originality: The developers really took a risk by releasing a first-person stealth-based adventure. And it seems that the risk paid off. Even though Thief is an older game, it maintains a reputation among many of being one of the greatest PC games of all time.

Soundtrack: Most of the music and audio in the game is atmospheric. In this regards, it is very well done. The first time you find yourself wandering in some deep dark crypt, with only the sounds of your own footsteps and the faraway drip of water, only to suddenly encounter a ghastly moan from around the next corner…. you’ll never forget it.

Fun: I know I say this a lot, but I forgot how much I enjoyed this game. I remember having fond memories of the title, but a lot of it faded with time. I’m glad I decided to include this one in my trip down memory land. Thief is a really a wonderful gaming experience.

Graphics: This is an area where many have mixed feelings, myself included. A lot of this game is beautiful. The level design and artwork is very well done, but many of the textures leave a bit to be desired. Even with the unofficial HD texture pack that is available through the game community, this game shows its age. Lucky for us, most of the game is played in near darkness, so in some ways, it’s not much of an issue. But still, even at the time of its release, the game was somewhat dated looking.

Playcontrol: Thief controls much like most standard FPS games, but it certainly feels different. The playcontrol is a bit stiff and rigid compared to other games. But keeping in mind the style in which the game is played, this is quite forgivable. Still, it does take a bit getting used to at first.

Value: Sells for under $10 on Steam. At this price it’s a steal…

Overall score (1-100): 90 – Despite its aged graphics and odd playcontrol, Thief is easily a excellent game. It’s a must-have for almost any gamer in my opinion. That being said, it’s certainly understandable that some people will not find it to be enjoyable. It’s a different kind of game. But with this in mind, I certainly recommend giving Thief an honest try. It is one of my favorites from the era.