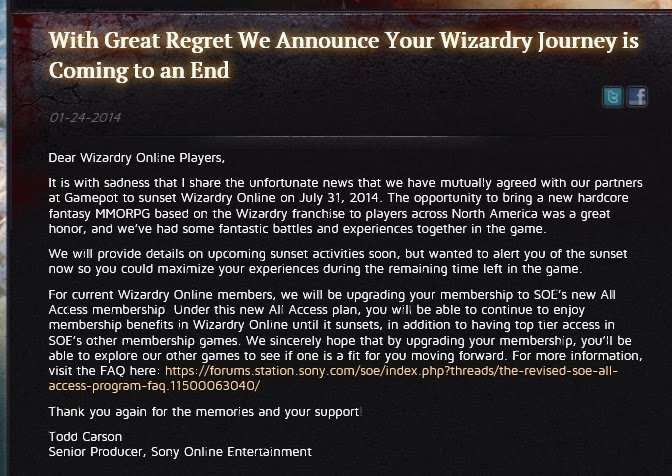 Well. Honestly. Who didn’t see this coming? I have mixed feelings on this. I really do.

As a lifelong Wizardry fan, I was extremely excited to hear SOE was bringing this game to the US. But, I admit I was extremely let down by the product that was delivered.

Longtime readers of this blog will know that I was VERY hyped for this game. I even started a podcast aimed at Wizardry Online. But, once I got my hands on it…. my excitement faded. Fast. So that leaves the question… what happened?

I know that Wiz Online is healthy in Japan. I don’t know if their client is identical to ours or perhaps has a bit more polished… but the success can’t simply be chalked up to cultural differences.
Look at other j-mmos like Final Fantasy. FFXIV 2.0 is thriving in both Japan and the US.

I really hoped that Wizardry Online was going to spark a new interest in the Wizardry series here in the west. But now, I fear that it will actually be the final nail in its coffin.

Perhaps one day, years from now the rights will change hands again and someone will reboot the series, restoring Wizardry to its former glory.