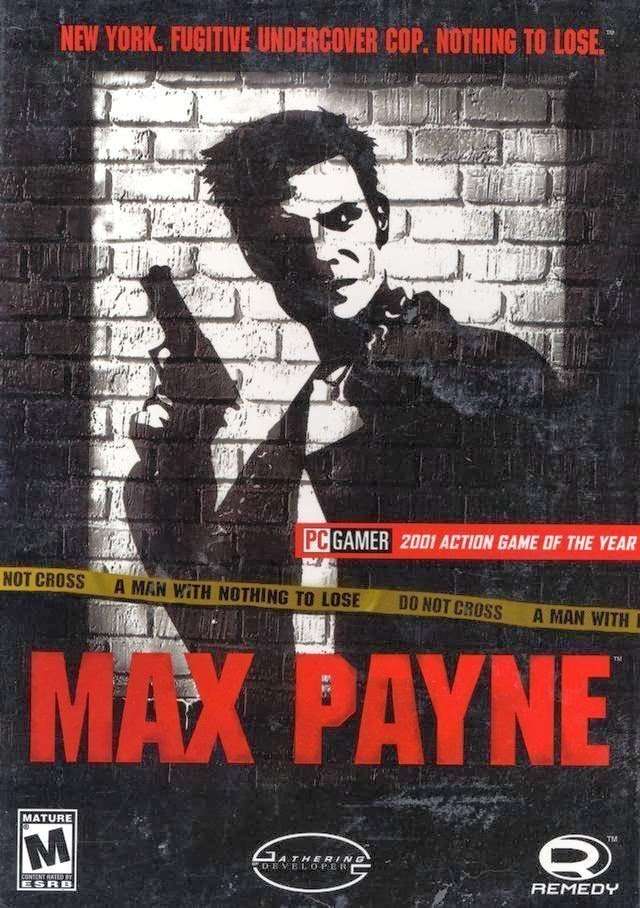 In a time when most popular PC games were following the cookie-cutter fads of either FPS or RTS, the publishers of Max Payne dared to break the mold. Max Payne was one of the last boxed PC games I purchased before my extended vacation from gaming altogether and perhaps was the last PC game, aside from Wizardry 8, to capture my attention and suck me in for any length of time at that stage in my life.

In the game you play as Max Payne, a recently widowed cop who has gone undercover in attempts to find out the truth about the murder of his wife and infant child. During his investigation, Max is blamed for the death of a fellow officer and becomes hunted by both the mafia and the NYPD. As details unfold it becomes clearer that there may be more to the death of his family than originally revealed and Max sets his sights on finding out the truth, no matter what the cost. 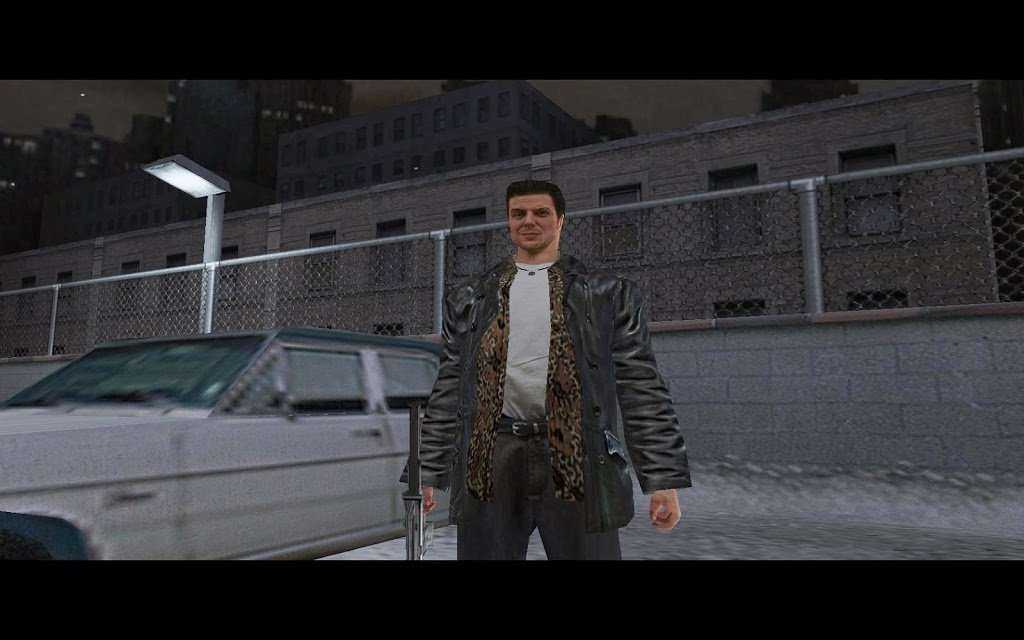 There’s a number of things that makes Max Payne stand out from most other games of the era. First off, it’s not a first person shooter. You could argue that it is a bit of a “shooter” but it features a third-person camera – So the perspective in which the game is played is automatically different. Plus, if your plan is to just rush into a room guns blazing, you’ll find that you won’t last very long. The key to success in this title is learning how to use the “Bullet Time” feature. This allows you to slow down the action in a Matrix-like fashion, for a limited time. This gives you a chance to fire off several shots or dodge enemy attacks in slow motion before returning to the normal, faster-paced style of gameplay. Bullet time really provides you with an advantage if used properly.

The game is actually presented as an interactive graphic novel of sorts. Story elements and cutscenes are presented in a gritty-looking comic book panels or in voice over narrations. The whole thing has a very noir feel it, which I found to be enjoyable. 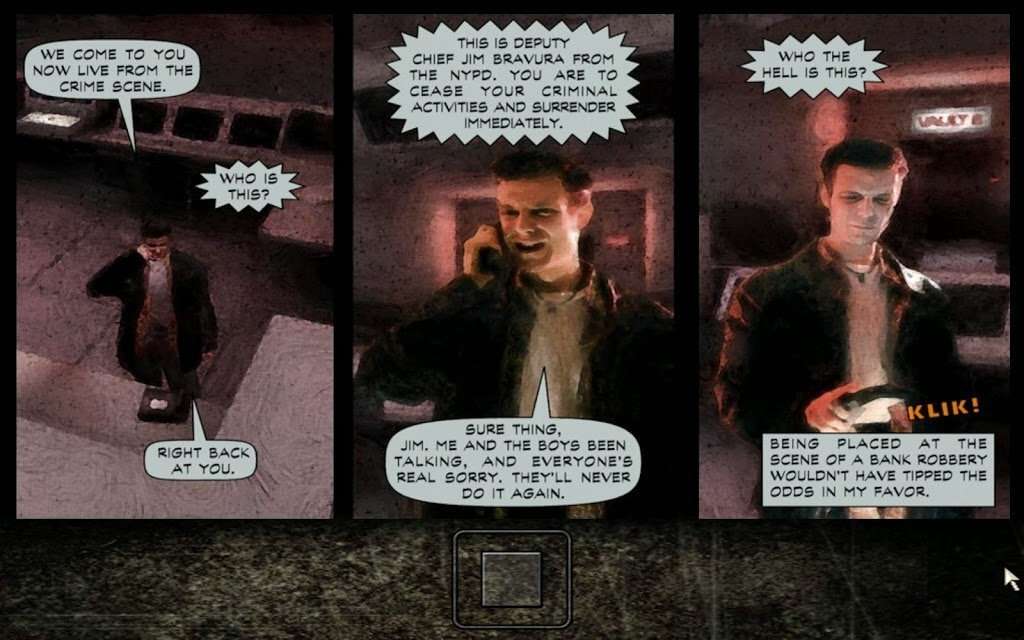 Most of the game itself consists of exploration, shootouts with bad guys and uncovering clues to help progress the story. Max doesn’t take very much damage at all before dying, so it’s important to keep a look out for Painkillers. These pills are the only way Max is able to recover his health. Learning when to use them is also a crucial part of the game. It’s not uncommon to find yourself close to death with no painkillers on hand just outside a room full of gun toting gangsters.

Needless to say, the game is very adult. The whole plot of this title focuses on drug-related crime. There’s also several mentions of sex and prostitution, and one very suggestive cutscene. But such things are to be expected in a neo-noir style drama.

I played Max Payne during its original release and I enjoyed it then, but I honestly did not expect I would like it as much today. I was incorrect. I found myself thoroughly enjoying my time with the title.  The whole game is about 10-12 hours long, shorter if you’re experienced. But still well worth the $10 pricetag on Steam. The game is also often bundled with its sequel for around $15. You can’t beat that! 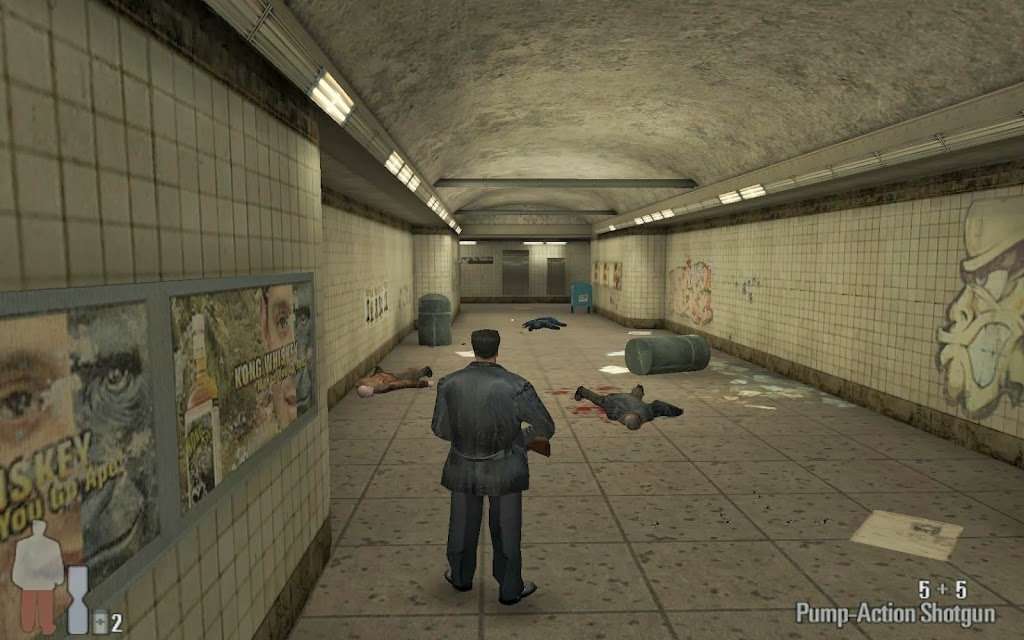 Difficulty: Variable–  The game features multiple difficulty settings. Several of these are unlocked after completing the game. So if you really find yourself enjoying the title, you can play again with additional challenges and time restraints. If it is your first time playing, I do recommend starting out on the easiest setting, at least until you become familiar with the ins and outs of the gameplay.

Story: Max Payne is very story-centric title. If you’re a fan of mob/police/crime dramas, this is the game for you. The plotline runs deep and is very well done.

Originality: If Max Payne is anything, it’s original. This title brings a lot of unusual elements to the table. The “bullet time” feature is pretty unique. As is the whole game actually. The game features two “dream levels” that are unlike anything I have ever seen. The devs were certainly not afraid not afraid to take risks and it really seems like it paid off in their favor.

Soundtrack: Max Payne has a very catchy theme. It can be heard on the menu screen and at various points throughout the game. There’s also some action music that plays during intense battles and towards the latter parts of the game. All in all, very well done and appropriate, but nothing you’d really want to listen to on your iPod away from your computer.

Fun: If noir stories are your thing, this game is for you. As I stated before, it’s a very plot-driven game, which is personally something that I enjoy.

Graphics: The visuals are a mixed bag. The levels are very well done and look great. The characters are photorealistic and look good from a distance, but up close the textures look a little silly and stretched, also maybe a bit too blocky, even for its time.

Playcontrol: Despite being a third-person game, the controls are very similar to others of the era. The game is controlled with a keyboard and mouse and everything feels pretty good. WSAD.

Value: Sells for $10 on Steam. This is a fantastic price for a game like this.

Overall score (1-100): 85 – Max Payne is an excellent game and even today manages to hold its own. There are some issues running the title on a modern system, but these are easily overcome using compatibility settings included in Windows. The game may seem a bit short by today’s standards, but it does offer optional modes of gameplay for those that want a little more. To me, the storyline alone makes the game well worth your time.