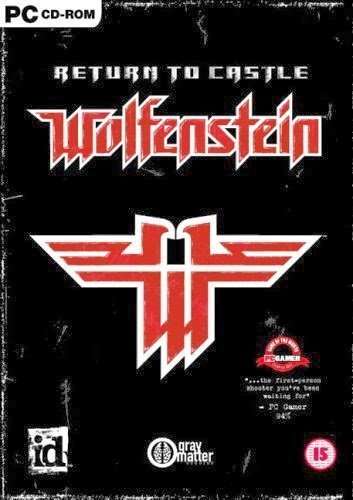 I’m slowly whittling away at the cache of PC games sitting in my desk drawer. After this review, there’s only two more I plan to play through before setting my sights on more turbulent waters. For this review, I spent a good week playing Return to Castle Wolfenstein. Ever since I posted my review of the classic Wolfenstein 3D, I’ve been waiting for this game to pop up on my list. I bought and played RtCW back when it first came out and I remember being really impressed with the title. Revisiting it today, I’m happy to state that even now, years later, I was not disappointed.

RtCW was released back in 2001 and was built using Quake III technology. Despite the “Return” in the title, the game is actually a reboot of the series. The single player scenario is a bit of a rehash and expansion of the original game. In this title, you resume the role of WWII US Army soldier B.J. Blazkowicz who is currently imprisoned by Nazis in Castle Wolfenstein. During your daring escape, you soon learn that the S.S. is working on a nefarious project, and you are ordered to investigate further and disrupt the Nazi’s plans. 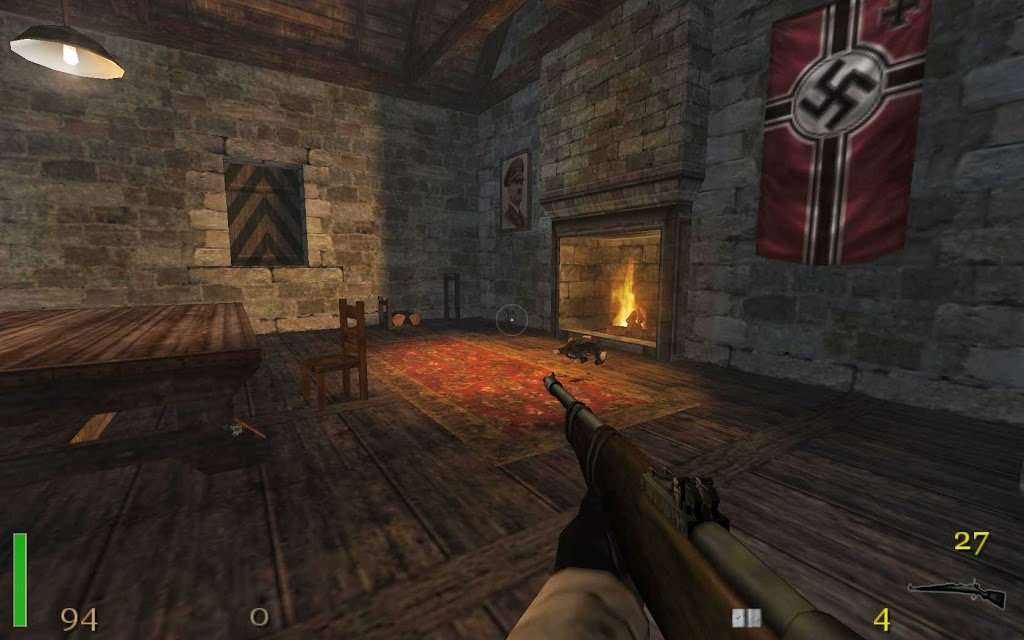 The game features an interesting blend of real history and popular mythology regarding Hitler’s obsession with the occult. This is a subject that I personally find quite fascinating. Of course, in the game all of these strange rumors prove to be true and you end up battling not only Nazis, but undead monstrosities and crude cybernetic soldiers as well. Even the weapons in game range from realistic WWII era firearms/explosives to fantastic experimental Tesla cannons and Nazi contraptions. All in all, the game does a great job of capturing the atmosphere it is aiming for.

RtCW is not your average FPS title. There’s actually a lot of sneaking and stealth involved. In many cases, you can dispatch enemies before they even know you’re around. This makes things much easier. The last thing you want is to be seen and have the whole area on alert. In fact, several levels of the game require you to infiltrate enemy areas undetected. Having the alarm sounded results in immediate failure of the mission.

I’m quite a fan of the single player campaign included in the game. But RtCW also features an interesting multiplayer element as well. The multiplayer version of game focuses on team events. Players are split between the traditional WWII themed Axis and Allies. Each team has models and weapons that are historically accurate. Players are also able to choose a role such as Medic, Soldier, Engineer, etc. So there are several “team fortress” elements found as well.

Like several of these older Quake-Engine games. There are unofficial patches out there that provide widescreen support and other enhancements for moderns computers. I found that I needed these in order to run the game on my 64-bit Windows 8.1 rig. 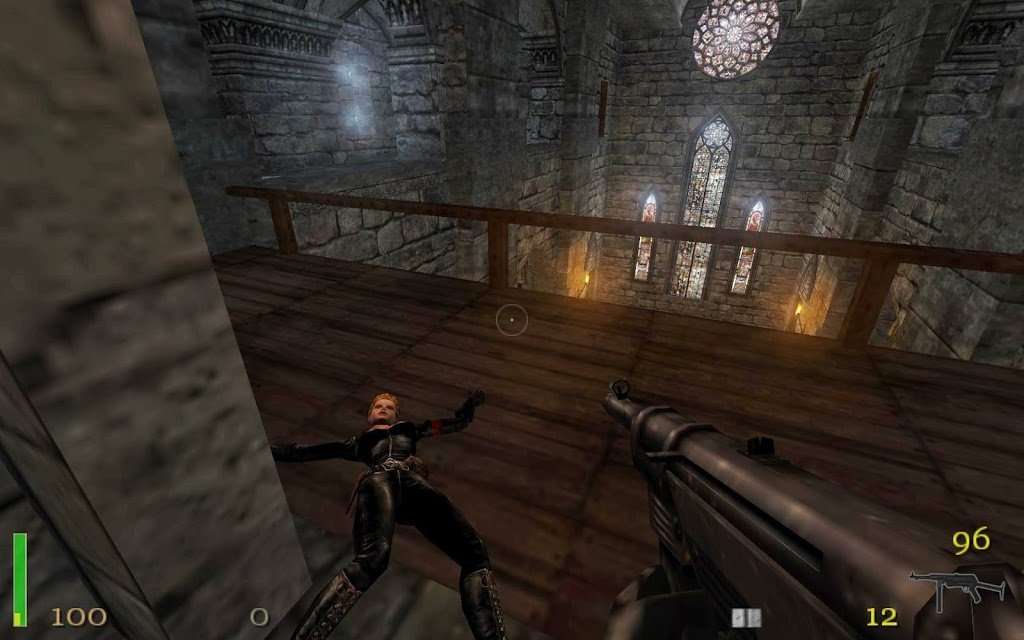 During my playthrough, I did not have much success finding many active players of the title, which is a bit sad considering how good I remember the multiplayer being during the game’s heyday. But for those of you that still crave some good Wolfenstein-themed multiplayer action, I have some good news; there’s a free “addon” for the game called Wolfenstein: Enemy Territory that is available for anyone, even if you don’t own a copy of the game. It is available here:

Originally developed as an expansion to RtCW, Enemy Territory is technically a separate game. I played several hours once I had finished my single-player playthrough and found it to be quite enjoyable. The community seems to still be very active and the gameplay modes offered were quite diverse. And for free, there’s no reason not to try it.

All in all, I had a lot of fun revisiting this game, and I’m looking forward to sinking my teeth into the next entry of the series in the near future. 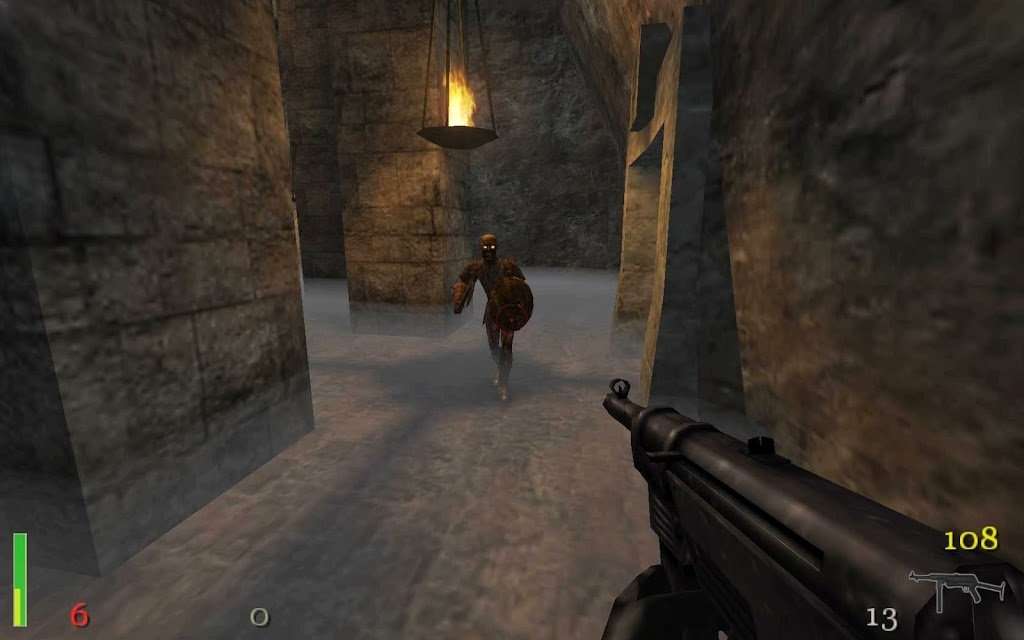 Difficulty: Variable–  The game features multiple difficulty levels for the single player campaign. I found the game to be a just bit more difficult than I expected. Even on Easy Mode, I found myself dying or getting caught by enemies farily easily. That being said, after a little thinking and planning, I was able to overcome almost any obstacle. So, while it was a bit tougher than I figured it would be, I actually think it was quite appropriate. Bravo. Needless to say, all bets are off when playing against other people. The difficulty in multiplayer mode is directly related to the skill of your opponents.

Story: The in-game story is driven both through “between level” cutscenes and in-game storytelling. There are notes left around for you to find and read to provide details as to what’s going on. You will also often hear enemy conversations that shed light on things. I love the semi-realistic WWII setting. The developers did a fantastic job of bringing the scenario to life.

Originality: At first glance, it seems like just another FPS or a simple remake of a previously successful game. But RtCW was actually quite fresh upon its release. Even today, I found it to be quite different from many other similar games.

Soundtrack: A lot of the in-game soundtrack is military themed and appropriate, but sparse. There’s also some atmospheric music coming from radios or phonographs. All in all, fitting and well done. Nothing particularly memorable however.

Fun: While RtCW is an older game, and for the most part one that has been forgotten and overlooked, I enjoyed it quite a bit. These days, there’s plenty of WWII themed multiplayer games out there to choose from, but when it comes to price, you can’t beat free. For this reason, I still recommend Enemy Territory as a good way to pass some time if you have friends interested in the genre.

Graphics: RtCW has environmental graphics very similar to those of Quake III. This is to be expected due to them sharing the same engine. However, I found the character and enemy textures to be quite an improvement over those from Quake III. Overall, the game seems pretty solid visually considering the time it was released.

Playcontrol: The default controls are pretty much perfect. The modern standard of WSAD is included out of the box and is implemented flawlessly. The game also features a “lean” command, much like that found in Thief, that allows you to peer around corners without being seen. This is a nice touch.

Value: Sells for under $10 on Steam. Great value

Overall score (1-100): 80 – RtCW is a solid game and one that I still recommend even today. However, it is not perfect. The single player campaign feels a little too short, and sadly, the multiplayer community seems nearly non-existent today. Also, the game requires quite a bit of tweaking to run well on modern systems. None of these things are fault of the game itself. So I don’t want to sound too harsh. But all things considered, I can’t really give the title a perfect rating.  I still recommend this title to anyone who enjoys FPS games, stealth games, or WWII themed titles. It’s a fantastic game and a worthy successor the original Wolf3D.