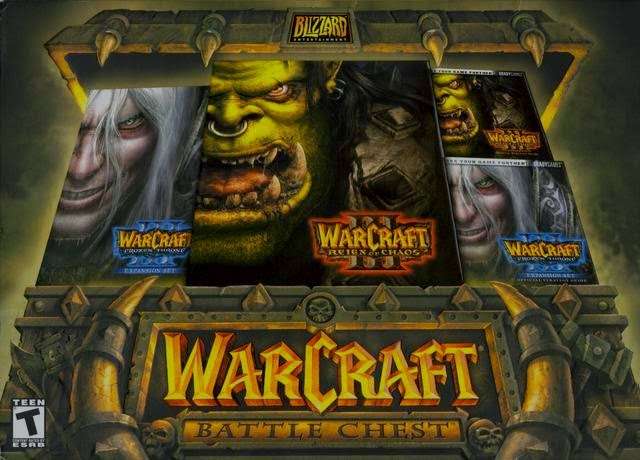 Finally, I have reached the last “old school” PC game on my list. Honestly, we’re not really that old-school territory anymore. WarCraft III is only about ten years old, but it does mark the end of an era for me. This game, and its expansion was the last PC title that I played before my first child was born. As any parent can tell you, having a child changes your life forever. Your attention and priorities change considerably. Once my son was born, there was a period of time, lasting quite a while, that really put a hold on my PC gaming – but that is story for another post.

If you read this blog often, you’ll know that Real Time Strategy games are not my favorite. In fact, I pretty much despise them. Regardless, Blizzard has a way of tricking me into playing their games. I played through WarCraft I and II, and I completed StarCraft. While I could appreciate the games for their vision and quality, I never really walked away from them wanting more. WarCraft III is the first RTS game that changed that for me.

First, let’s be clear, WarCraft III was released in 2002. The era of 3D accelerated gaming was in full swing. Blizzard is not ignorant. Despite being a Real Time Strategy game, WarCraft III is fully accelerated. The graphics retain the cartoonish art-direction of it’s predecessor, but everything looks much better.  The lighting and environmental effects are very well done, the textures are detailed and attractive, everything looks great here. 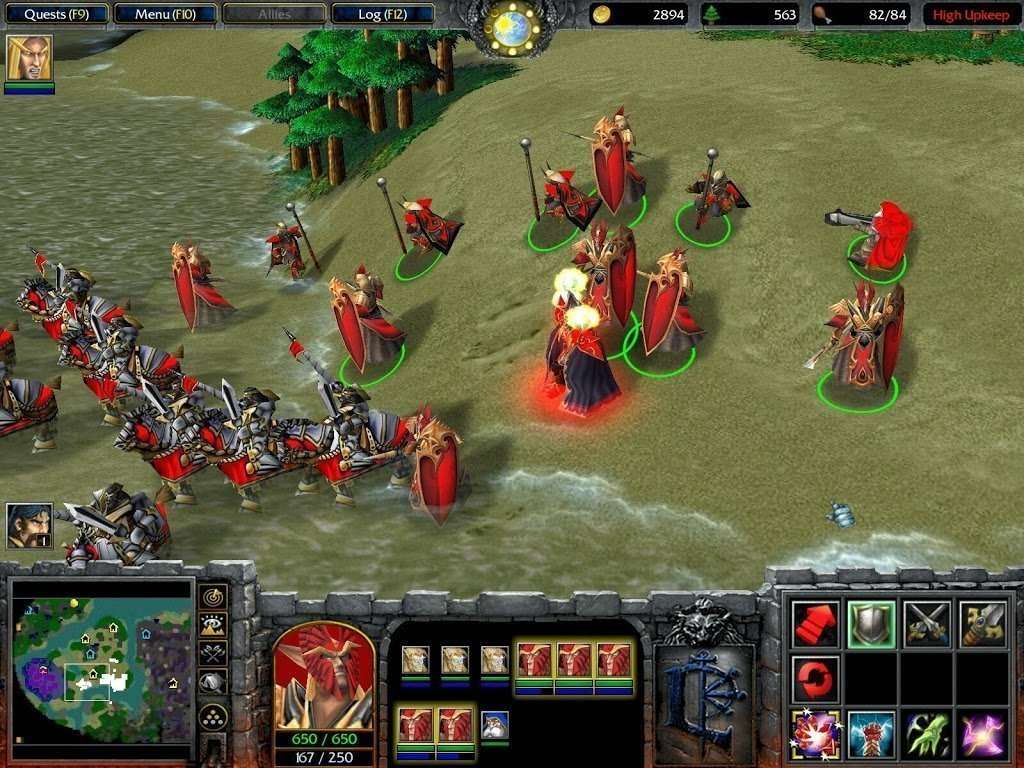 Also, now more than ever, the game is driven very heavily by story. Each chapter and scenario you play through in this title is filled with purpose and helps progress the story along. Not only does this make things a bit more interesting, but it found it helped motivate me and kept me interested in playing. For fans of the World of Warcraft MMO, this game sets up some very crucial themes that are a large part of WarCraft lore.

In this game, there are a total of five chapters to experience. Two of these focus on the story of the Orcs. But there’s also a chapter from the viewpoint of the Humans, Elves and even the Undead. Each scenario presents a good balance of traditional RTS gameplay and story-related content. Each scenario also presents its own unique challenges. (The Undead scenarios were a favorite of mine.) Story elements aside, there’s not much to talk about gameplay wise. The game works and plays like the other titles in the series so far. There are some refinements of course. New features such a experience levels for heroes is a nice touch and helps bring some RPG elements into the genre.

While my recent time with the game focused mainly on the single-player campaigns, the game does feature a multiplayer mode. The community remains surprisingly healthy despite the age of the game. So if this is your cup of tea, you will not be disappointed. Community mods and custom content are plentiful.

Naturally, there is an expansion that adds additional scenarios. These days, the two titles are usually sold together either digitally or as part of the WarCraft III “Battle Chest”. The expansion picks up right where the original game left off in terms of storyline, and features some pretty impressive lore elements. Personally, it is my favorite of the two.

Having played through all of these games over the last several months, it’s quite obvious to see just how well Blizzard’s RTS games have matured over the years. From WarCraft to WarCraft II, on to StarCraft and now to WarCraft III – each game has become incrementally better. So much so that this title actually won me over. – No easy feat. 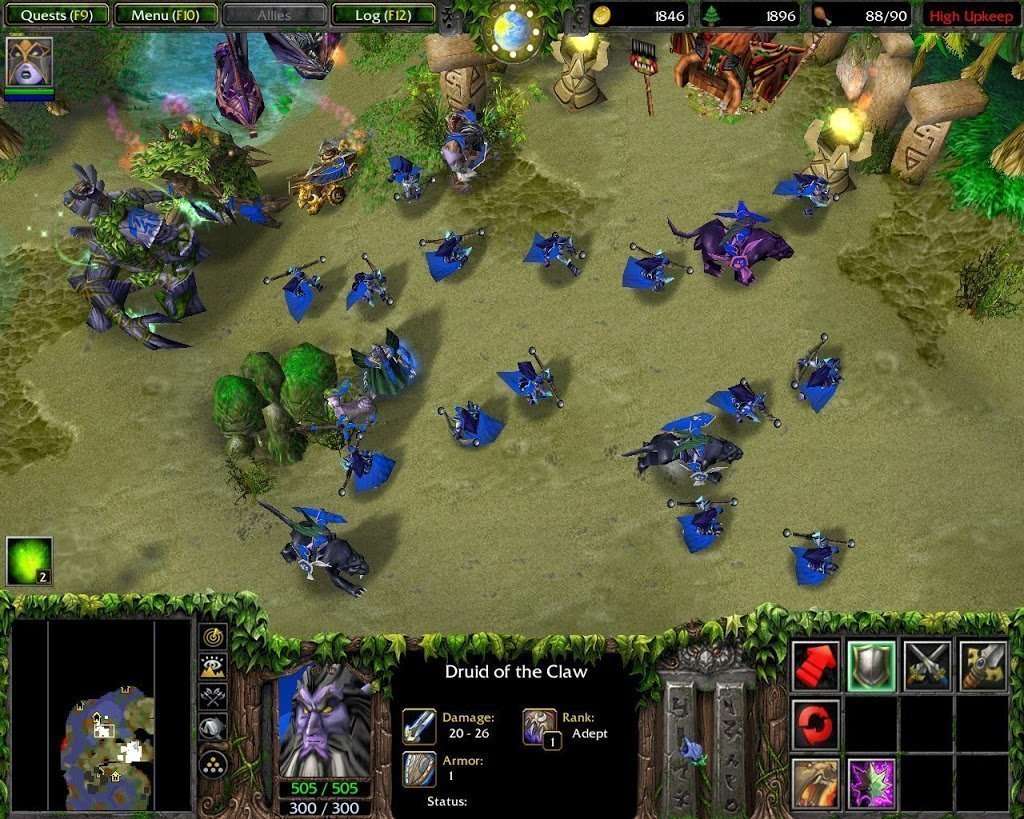 Difficulty: Variable–  This entry in the WarCraft series does offer variable difficulty. I played through the game on the normal setting and found some of the later levels to be quite challenging. Almost extremely so. The game does feature an optional prologue which serves as a tutorial, and the game offers tips and hints as you progress. These help at first, but by the end of the game, you will really need to be on your toes to win. First time players may want to play on the easiest setting until they feel comfortable.

Story: For an RTS game, WarCraft III has some really good storytelling. The story in both the main game and the expansion are very well done and interesting.

Originality: Despite being the third entry in the series, this game does offer enough innovation to maintain a fresh feel. The in depth scenarios, and introduction of colorful characters do a lot to make the game feel like a new experience.

Soundtrack: WarCraft III features an amazing soundtrack. Fully orchestrated tunes that really set the tone and direction for the game. The voice acting in the game is also very well done, albeit a bit overly comical in my opinion.

Fun: As someone who is not really a fan of RTS games, this title still managed to keep me entertained. For the first time in “craft” franchise I found myself actually really enjoying the game. That’s saying something.

Playcontrol: These games are played primarily using the mouse alone. I feel like the UI and overall control scheme here is very well done, if not perfect for the this type of game.

Value: Warcraft III sells digitally on Battlenet for around $20-$30.  If you’re a fan of RTS games, this is a decent price. Gamers who are on the fence may want to find an retail copy as these often sell for much less.

Overall score (1-100): 90 – As far as RTS games go, WarCraft III is about as good as they come. Players new to the genre would do good to start here. I found the game to be a good balance of both RPG and RTS elements. Everything from the storyline to the sound and graphics are wonderful.