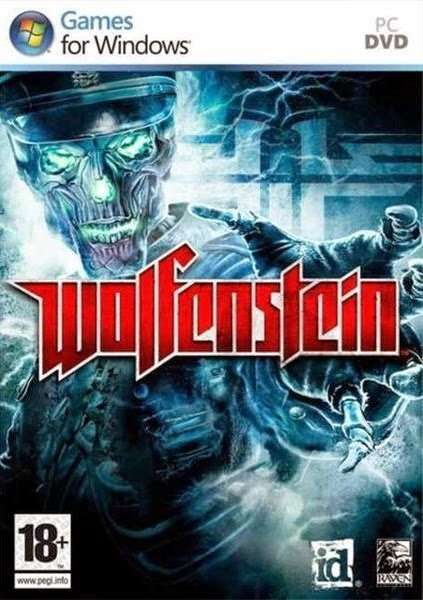 I had planned to spend the next few posts focused exclusively on PS1 games, but I have to admit I’ve been sidetracked due to a few new releases. Often, I will place new PC games on the back burner for a bit. This allows many of the zero-day bugs to get worked out as well as the price to go down. In this case, the latest entry in the Wolfenstein series just came out a few days ago. I LOVE Wolfenstein. Of course, before playing it, I had to catch up with previous entry in the series, a game titled simply: Wolfenstein.

This game is a direct sequel to Return to Castle Wolfenstein. I was lucky enough to snatch it up on a Steam sale a few years ago, which is fortunate because these days it is no longer available for purchase on Steam due to some licensing issues. Lucky me.

Wolfenstein continues the adventures of allied solider BJ Blazkowitz. In this game, BJ is tasked with researching the secrets of a strange artifact he recovered from a German gunship. The medallion in question is powered by very unusual crystals that are mined in only one location; the German city of Isenstadt. Naturally, the Nazi’s have the city completely under their control. BJ’s job is to infiltrate the city and hook up with the local resistance movement in attempts to uncover what the Nazi’s are up to. This is where the game begins…

For this entry in the series, we have a very different game than the previous entries in the series. While still classified as a first person shooter, it’s very obvious that the genre has evolved greatly over the years. There’s much more to this title than simply running and gunning down the bad guys. Tactics in this title include taking cover from enemy fire, avoiding detection, and even using environmental weapons to take out enemies. 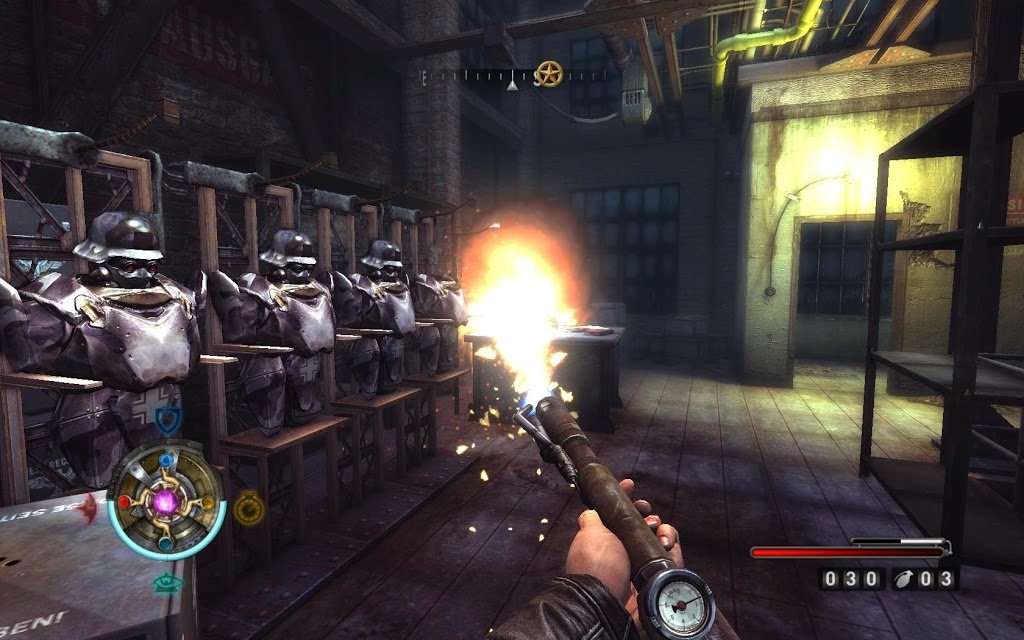 The game features a very realistic arsenal and a handful of fantastic weapons as well. The gamut runs from actual assault rifles used in WWII, to flame throwers and Tesla weapons. Unlike previous games, each weapon can receive a series of upgrades. These include things like more ammo capacity, better range, or silencers. Upgrades are purchased from an in-game merchant using gold and currency obtained during the course of play.

The game features a pretty in-depth stoyline. The main focus of the game is uncovering the Nazi plot regarding the medallion mentioned above. During the game, BJ will bounce between two different resistance groups operating within the occupied city. As a result, the town itself turns into a hub or sorts, connecting the various levels that the player must complete to progress through the game. Most levels are unlocked by accepting quests (known as Objectives). Typically, each major Objective takes place in a new level. Levels can be repeated and some can even be skipped (if a particular objective is not accepted). Each level also contains hidden currency and secret enemy intel. The intel helps to flesh out the storyline as well as provide hints for gameplay. 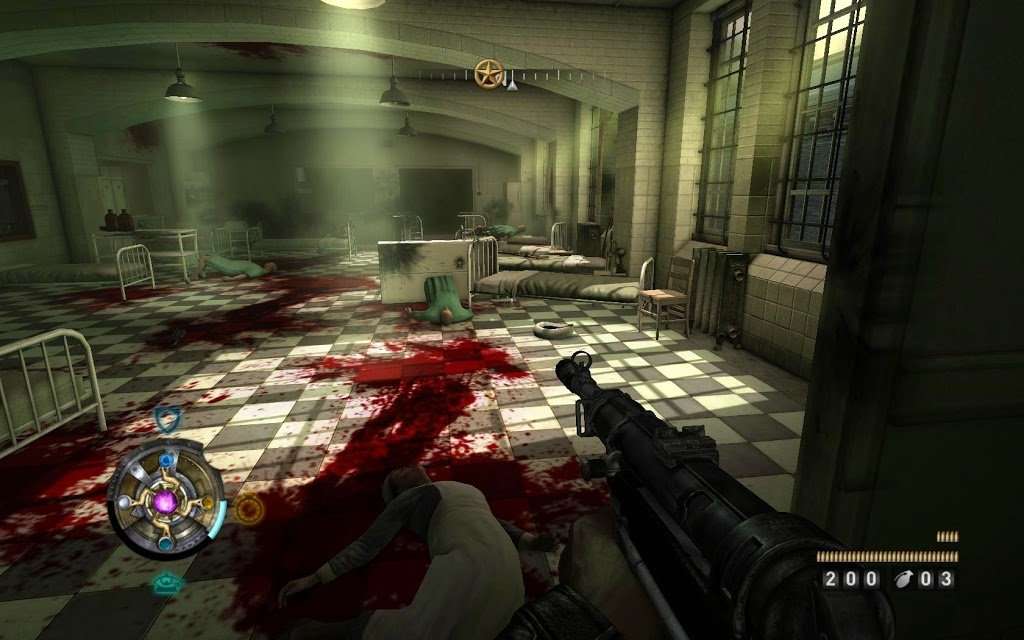 The trick to mastering the game is understanding the medallion artifact. The medallion grants BJ special abilities as the game progresses. These include slowing down time, a special shield aura ability and most importantly; the ability to see an alternate reality known as “The Veil”. Certain doors and areas are only accessible while in Veil Mode. Also, this mode also allows you to view enemies’ weak points. So it’s crucial for certain battles.

All in all, the single player scenario is very entertaining and well done. But I didn’t really feel like I was playing a Wolfenstein game. Something just felt a little “off” to me and I can’t quite put my finger on what it is. I think perhaps, the game ended up being just a little TOO fantastic and neglected the real WWII air that the other games in the series had. I mean, Nazi occult fantasy is great, but alterverse alien creatures just don’t seem to fit in. I’m playing Wolfenstein, not Half-Life.

Finally, I want to mention Multiplayer. I was really excited to dive in to the multiplayer content of this game. There’s Axis vs Allies Deathmatch,  Stopwatch, and Objective games. These are just fancy names for game styles that we’ve all seen previously in multiplayer shooters. But I was really looking forward to trying them out in Wolfenstein. Sadly, I did not get this opportunity. When I fired up the multiplayer mode and searched for game to join there was…. nothing. I mean absolutely nothing. No browser, no options to choose from… literally nothing. Something about the multiplayer mode for this game on the PC is just plain broken.

I thought maybe the problem has to due to the licensing issues with Steam. So I manually patched the game and tried again. Still nothing. After doing some research, it turns out to be an issue of some sort between the game developers and the Punkbuster anti-cheat software. Apparently, Wolfenstein is no longer supported by Punkbuster, yet the online portion of the game is dependent on it. So… we have nothing. Due to this issue, I suppose if you want to experience the multiplayer content of this title you’ll have to play either the Xbox 360 or PS3 version of game. Good luck with that. Seriously. I mean, look at the picture below: 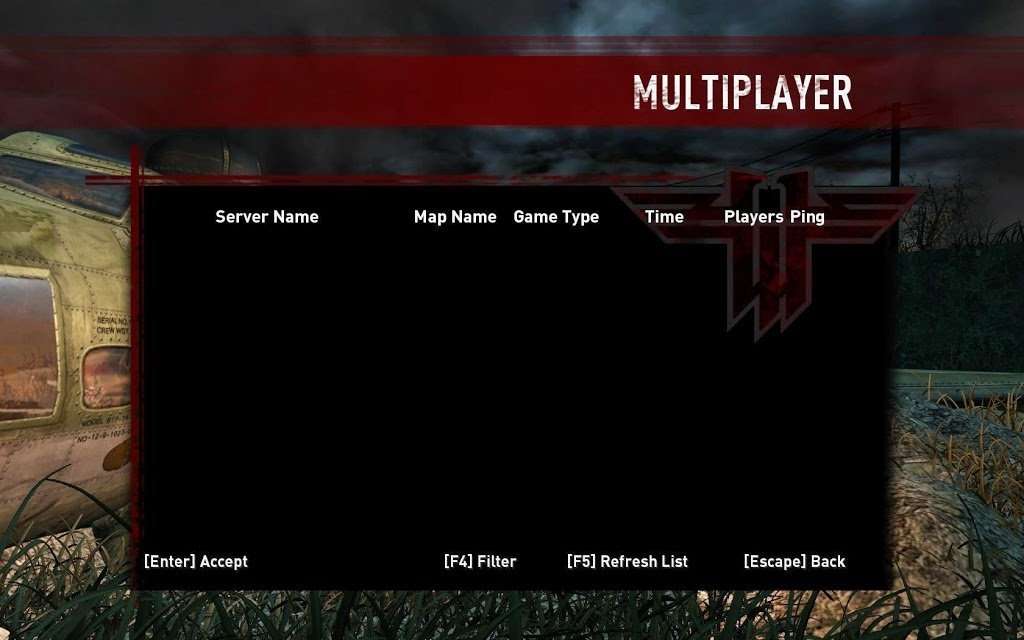 Difficulty: Variable–  There are multiple difficulty levels available to choose from. From my testing, these seem to be very well done and appropriate. Personally, I had to spend a little time in easy mode to get a hang of the gameplay before beefing it up a bit. Most of my FPS experience is with games from 10+ years ago, so I needed to have my hand held a bit.

Story: The storyline itself is a blend of history and occult fantasy. Moreso than even the previous entries in the series. It’s engaging and very well done. But as I mentioned, it felt a little out of place when compared to the other games in the series.

Originality: To my eyes, this was a completely new experience in FPS games. But I understand that in reality, there’s actually very little originality here in terms of gameplay. Many FPS games over the last decade feature a duck and cover style play that add a sense of reality that did not exist in the old “zerg and shoot everything” days of Quake and Doom. One thing that does make the game very unique tho, is the Thule Medallion and the abilities that go along with it. This functionality really makes for some interesting gameplay.

Fun: I did have a quite a good time playing the game. The main scenario only took me about 8 hours to complete, and that was with every objective conquered. I really wanted to spent a lot of time with the multiplayer. But sadly, that aspect seems almost non-existent.

Graphics: I found the graphics to be very well done. Both the character and environmental textures are excellent. Shadows, lights and even particle effects are spot on. This is a good looking game.

Playcontrol: The default PC controls are pretty standard. I do not have any experience with the console versions. The game used a variation of the WSAD scheme found in most FPS games. No real issues.

Value: This game is no longer available digitally. Physical copies vary in price. Personally, unless you’re a Wolfenstein fanatic, I wouldn’t pay more than $20.

Overall score (1-100): 60  – Wolfenstein is a good game, but one that feels very neglected. I really feel that the developers have all but abandoned the title. Which is sad due to the popularity of the franchise. I recommend the game to fans of the Wolfenstein series, and even to those who enjoy WWII games. But if you’re looking for a good FPS to play, there are other games that do it better and that are more accessible. If possible, get the game on PS3 or 360.