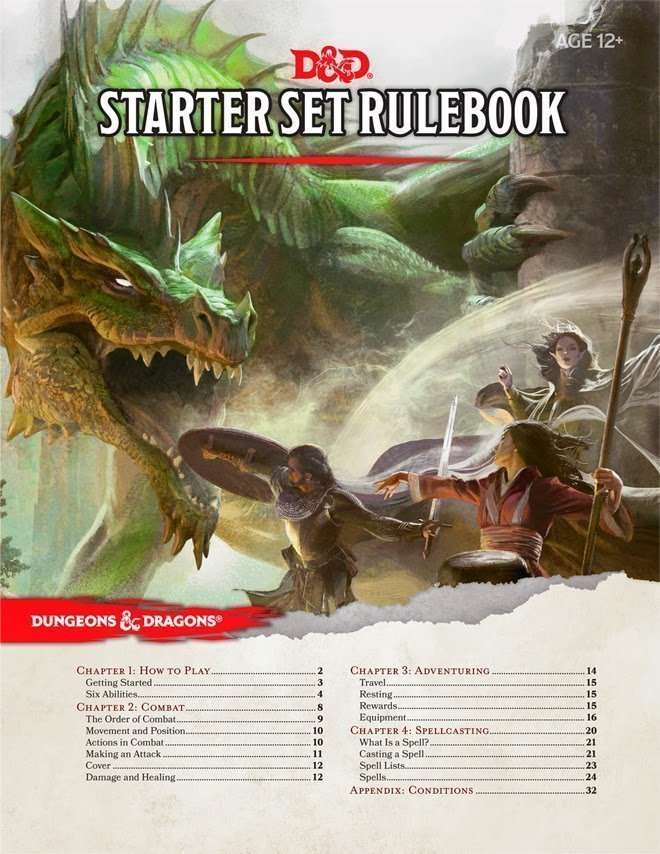 Updates to the site have been slow lately because I’ve been grinding away at some pretty big games. So in the meantime, I’ll take a quick break from the video games to talk about the new D&D. That’s right, it’s finally here: Dungeons & Dragons 5E!

Initially, when I discussed D&D I expressed some concern over pricing. It’s true the that new core rulebooks will carry a hefty pricetag, but thankfully Wizards of the Coast did something I never expected. They have announced that the basic version of the game will be available for FREE.

That’s right, all you have to do to mozy on down to www.wizards.com/dnd to download a free PDF version of the basic D&D rules. This covers character creation, magic rules, combat rules, and a little bit more. It’s certainly enough to teach the very basic mechanics and get a character prepared.

In just a few days, an inexpensive Starter Box Set will also be available for purchase in most book stores. For $20.00 you will get a printed and slightly expanded version of the rules, a set of game dice and a few other trinkets and tokens. This package is meant for new players or anyone who wants to get their hands dirty a bit before the full rule books are released in the coming months. However, to be clear, Wizards is stating that the free PDF is all a PLAYER will need to actually enjoy the game.

So what am I taking away from all this? Well, I think the move of making a free version of the game is a good idea. But I get the feeling that Wizards is trying to steer people into the direction of playing their “live hobby store events” instead of focusing on the classic “play at home” players. What I mean by this is simply this: Wizards of the Coast wants you to download the PDF, create a character and then take your character to your nearest authorized retailer where you will then join other players in an officially sponsored event. Participation gets you a certificate and the whole nine yards. If I understand thing correctly, your character can be used at ANY officially sponsored event regardless of location. Now I guess that’s cool. But I’m not used to playing D&D that way.

Of course, people can still play their own campaigns at home. And they most certainly will. But I worry that the allure of playing an “official” campaign combined with the potential roadblocks of finding an open seat, and locating a shop to play in may also turn some players off. Thus, making the ranks of D&D players dwindle rather than swell.

Personally for me, the nearest WotC sponsored game is over 40 miles away. That makes it difficult.

Ok enough ranting. I’m impressed by what I’ve seen with the 5E rules. It is most certainly a new and fresh take on the game mechanics. Yet, it manages to have a touch of that old school 1E feel that I love. I have high hopes for this edition.

I will certainly be buying the starter set. Once I do, I’m going to start keeping my eyes peeled for a game. Be it some local people or one of these official events. I WANT TO PLAY.