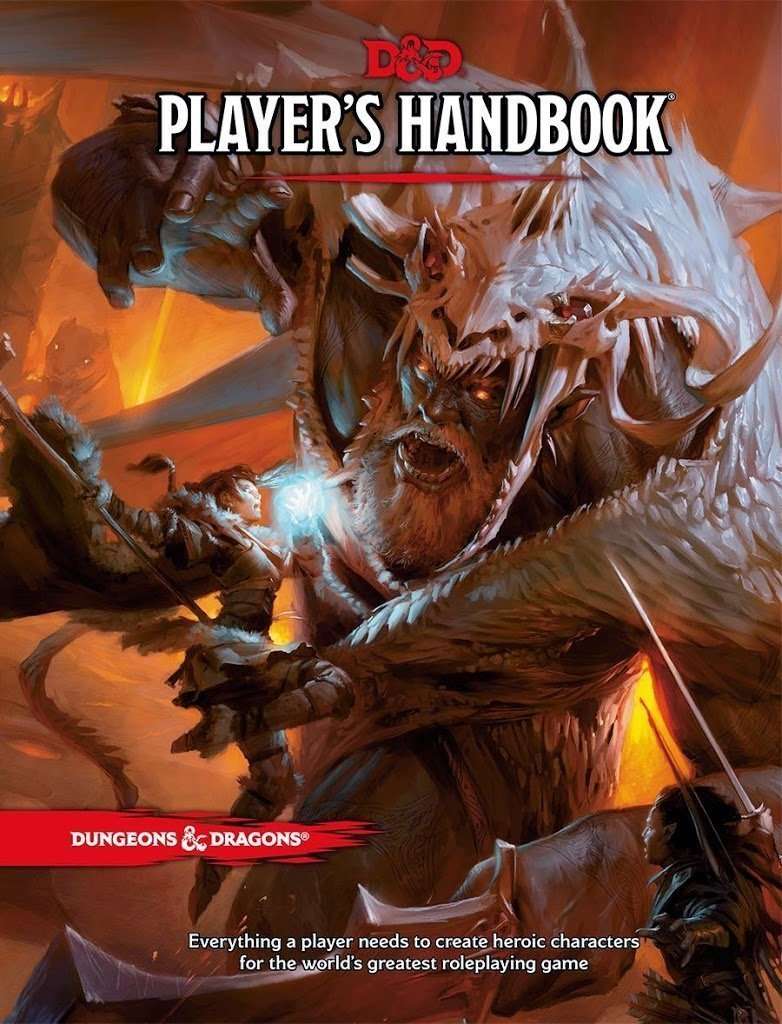 Last Wednesday I played my first actual game of Dungeons & Dragons in almost twenty years. As I’ve mentioned before, I’ve had an interest in Dungeons & Dragons since I was around eleven years old. I played my first games with some family friends, a bunch of young AirForce guys. Through them, I learned the basics. We played a few AD&D 1E games, then switched over the brand new 2nd Edition. This occurred while I still living in Japan. Once I got back to the states, I still collected the books, but I had a very hard time finding a dedicated group. A lot of the kids my age didn’t share my maturity level and when I did manage to get a game together, it ended up being filled with people making dick jokes, or pseudo-sexually roleplaying. Not my cup of tea. By the time 3rd Edition came out, I did catch wind of some serious groups in my area, but by then, my interest had shifted to other things.

Over the years, 3rd edition split into 3.5 and then 4th. 3.5 loyalists made their own game; Pathfinder, and it got very fragmented and confusing. But, once I learned a 5th edition was coming, my interest was sparked.

I decided that instead of falling into the trap of trying to get friends to play, I would seek out a group of serious gamers. I used Meetup.com to find an official group in my area, I RSVP’d and took the plunge.  Here’s how it went down: 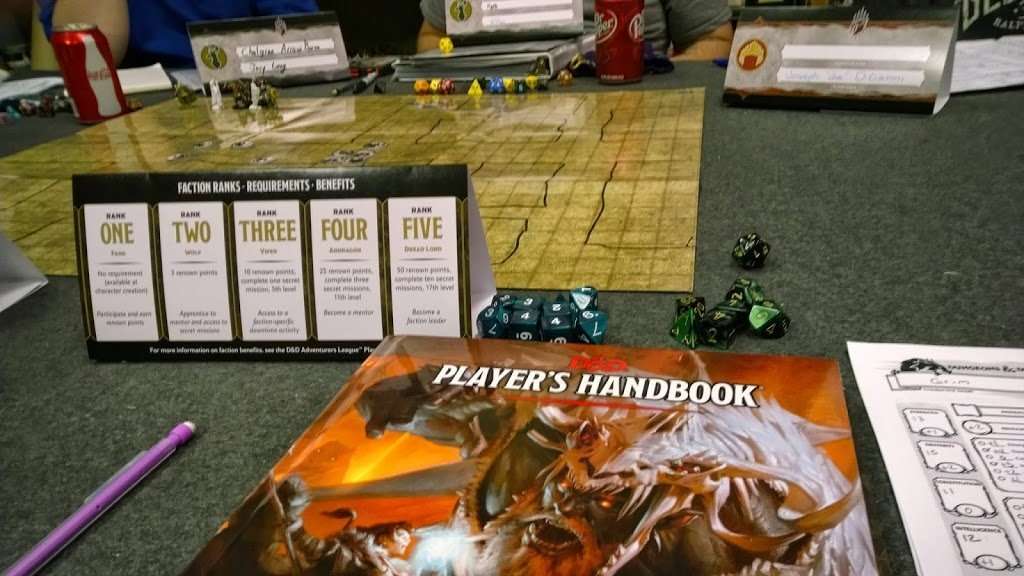 After registering, I went and bought myself a copy of the Player’s Handbook and spent a good part of the afternoon reading over it, and making a character. For the most part the process was fairly straightforward. I did get confused at some points when it came to ability modifiers. I wasn’t sure how to record these accurately at first. Rolling stats was easy. Then came the racial modifiers. Ok. Done. Then came the class modifiers. Ok… Proficiencies were next. I was told to choose four. Then, I find out that some are assigned to me automatically. Did I need to change my original choices if there was overlap? Were these additional to the original four? I found myself jumping between two or three chapters just trying to figure out what exactly I was supposed to record.

When it came to equipping my character, I was given a list of starting items. Then, ANOTHER list when choosing a character background. It was clear as mud at first. It wasn’t until I actually got to the game table and asked other players did things start to clear up.

I guess my biggest gripe is, there’s really no clear cut step 1, step2, step 3, etc, in the PHB. No one is going to read it cover to cover. It is a reference manual. Maybe the basic version of the game or the version in the starter set is a bit clearer, I don’t know. Regardless, that is my big gripe.

The options included in the 5th Edition Player’s Handbook are mixture of both old and new.  Back when I last played in the 2E days, official options were limited to Fighter, Mage, Cleric, Thief – to start. There were also “advanced classes” that consisted of; Paladin, Ranger, Specialist Wizards, Druids, Specialist Priests, and Bards. Character race options back then were; Human, Elf, Half-Elf, Dwarf,  Halfling and Gnome. (Later releases saw additional options and variants of both classes and races, but these were the base ones that I was familiar with). Today, the 5E PHB offers the following playable races: Human, Dwarf, Elf, Half-Elf, Halfling, Gnome, Dragonborn, Half-Orc, and Tiefling.  – I was familiar with Half-Orcs from back in the old 1E days, but Dragonborn and Tieflings were both new additions to me.  When it comes to classes, the 5e PHB offers the following: Barbarian, Bard, Cleric, Druid, Fighter, Monk, Paladin, Ranger, Rogue, Sorcerer, Warlock, and Wizard. – Lots of changes here! Again, I recognized Barbarian and Monk from my time with first-edition. But some of these other new additions took me by surprise. “Wizard” seemed to be your classic Mage, but Sorcerer and Warlock were new types of magic users I was unfamiliar with at first. Needless to say, I was a bit overwhelmed with all the new options and rules. D&D had matured past the point of comfort for me.

Upon arriving at the hobby shop, I went to the game room in the back. There were five tables and they were already filling up. Four games of 5E D&D and one Pathfinder game. Everyone was friendly and handshakes went around as you might expect. Shortly after taking a seat, I was handed a DCI enrollment card. This is apparently to officially register me in the DCI rankings for Wizards of the Coast. My membership number allows me to participate in official convention games as well as track my progress in the new “Adventurer’s League”. Upon registering on the website later that day, I didn’t really see any way to keep up with this, however.

The game ran for two hours. I didn’t really expect much to get done honestly, but we did actually play for a while. For the record, I rolled a Tiefling Rogue. I’ve always enjoyed playing “thief” type characters, and the Tiefling race was new to me. This was something we didn’t have in the old days. The game we started was the Tyranny of Dragons. This is official storyline/module that is running between now and March of 2015. For more information on this, click here: Tyranny of Dragons

The official game-world in fifth edition is Forgotten Realms. This felt comfortable to me from my days playing 1e and 2e. Not a lot of backstory was provided, I get the feeling that the Dungeon Master was a bit of a rookie… I heard a lot more detail coming from some of the other tables. But, I’m not going to complain. At this point, I’m certainly no pro. I’ve been out of the game for a long long time, and I had PLENTY of questions. Everyone was nice enough to take the time to answer them, so again, no complaints. I was given a print-out with a description of several factions. I was told I could choose a faction to align my character with if I wished. I picked one and then was given a very nice folder to keep. Inside were some official character sheets, a description of the faction and some sort of registrations codes. One was to redeem an item in the D&D Neverwinter MMO, the other… I’m still not sure what it’s for yet. Still, it was a nice unexpected freebie.

The gist of our night was this: rumors of a town being ransacked by bands of Kobolds. Call to arms for all abled adventurers, etc etc. Upon arriving, we do indeed find a town in peril. Smoke is billowing from the ruined city and a dragon is circling the skies overhead. Our party made it’s way into the city and joined up with a group of characters that were being attacked by roaming bands of Kobolds. Battles ensued. Then another, and another and another…. the rest of the night was basically battles as we made our way through the town towards the keep. Despite what seems to be slow progress, I had a lot of fun. It was a blast.

There was a lot more combat right out of the gate than I expected. The DM seemed unclear on certain things when asked, but overall it went very well. At this point, I’m still in the learning stage so I’m not taking things too seriously. I plan to attend this week and I will again post my assessment of this week’s game as well.