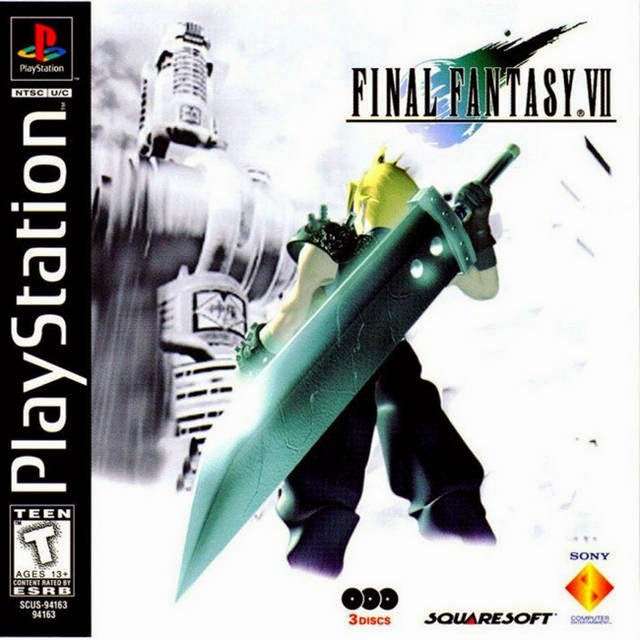 I now take on the challenge of reviewing one of the most beloved RPGs of all time; Final Fantasy VII. These days, there’s no right way to review this game. Anything and everything that can ever be said about this title has been said before. Admittedly, there’s a thousand other reviews of this game that are probably better than anything I can cobble together, so I’m going to take a very personal approach with this review.

Final Fantasy VII was the first game in the series to be released on a non-Nintendo platform. This title found its home on the Sony PlayStation. As I have mentioned on this site before, I did not own a PlayStation during its initial run. At that point in my life, my attention had drifted away from console gaming for the most part. But I was fully aware of the game’s release and very intrigued by it. My roommate had a copy and I observed him playing it from time to time. About a year after FFVII first came out on the PS, it was ported to the PC. I took that opportunity to purchase and play through the game. So yes, my original introduction to this legendary game was through the infamous “crappy pc version”. Of course over the years since, I have since played this title a number of times on what I consider to be the proper medium (a PlayStation console). In recent years, the old PC version has resurfaced on Steam and boasts a slightly higher resolution and even Steam-based achievements. I briefly considered playing this version for my review (if only to rack up the achievements), but I found the keyboard controls to be very clunky and not intuitive at all. I tried using my trusty Xbox 360 controller as an alternative, but even that seemed to suffer from poor playcontrol. I barely made it a few hours into the Steam release before firing up my PS3 and playing through the game there. 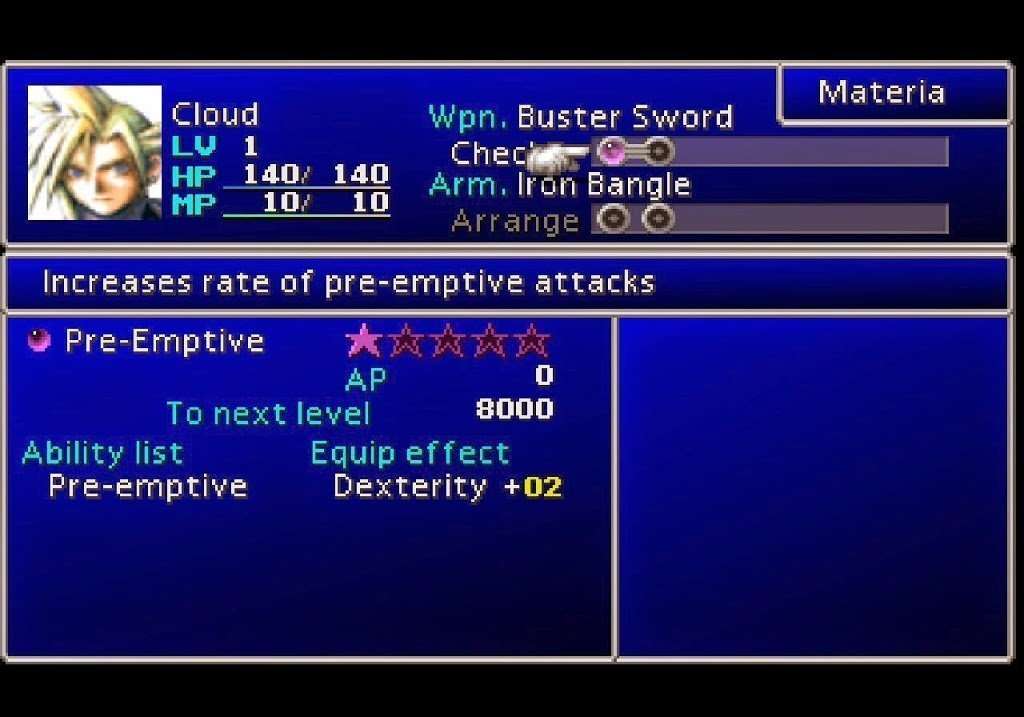 Final Fantasy VII takes everything that has made the series great thus far, and cranks up a notch. This game features rich storytelling, loveable characters, an unforgettable soundtrack, and (for the time) wonderful graphics.

The game focuses mainly on a character by the name of Cloud. When the game begins, Cloud has recently joined up as a mercenary with a band of environmental activists called Avalanche. Until recently, Cloud was a member of an elite combat unit known as SOLDIER. This group was employed directly by the powerful Shinra Electric company; a corporation that’s grown so powerful over the years that they’ve actually become a sort of de-facto government entity. It is soon revealed that Shinra draws their power by tapping into the very lifesource of the planet itself. As a result, the world is slowly dying. Avalanche makes it their goal to prevent the destruction of the world by exposing Shinra’s deeds and launching terrorist-style attacks on the company’s reactor sites. As the game story progresses, it becomes apparent that there are even stranger projects being undertaken at Shinra. As you play through the game, more and more backstory is revealed. I’ll stop here to prevent any spoilers, but let’s just say there’s a reason Final Fantasy VII is considered to be one of the greatest RPGS of all time. The story found within this title is arguably one of the greatest in video game history. 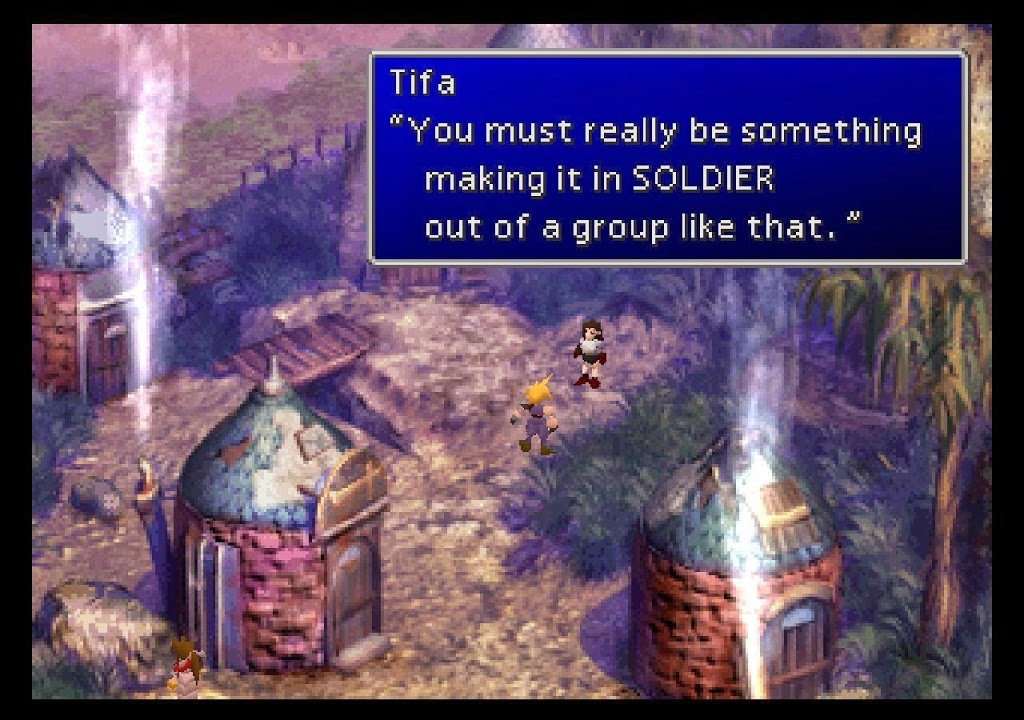 For the most part, this game will feel familiar to anyone who’s experienced other titles in the series thus far. You control a team of characters as they explore the world, battle monsters, find and equip new items and treasure, and uncover the main plot of the game.

Combat in this game will feel pretty familiar to existing fans. But there is much more here than the simple turn-based battles we’ve seen before. Aside the regular options we’ve seen thus far, battle in Final Fantasy VII also features something called the “Limit Break” system. Essentially, as you battle and take damage, there is a meter that slowly fills up over time. Once the meter is full, that character can unleash a devastating attack called a Limit Break. There are a number of limit breaks available to each character and these are unlocked over time.

The most unique thing about combat in this title compared to other FF games is the Materia System. Spells and magic are not purchased or learned in this game like they are in some of the other titles. Instead, there are various magic stones that can be equipped in on your weapons and armor. Each stone, when equipped, grants that character the ability to use a spell, summons a monster for battle, or offers some other type of enhancing effect. Materia can level up overtime and a result, the effects can be enhanced. In some instances, materia can be linked together to create new effects as well. Learning how this system works is a key element to the game. Luckily, the game includes a number of tutorials, making understanding how this system works very simple. 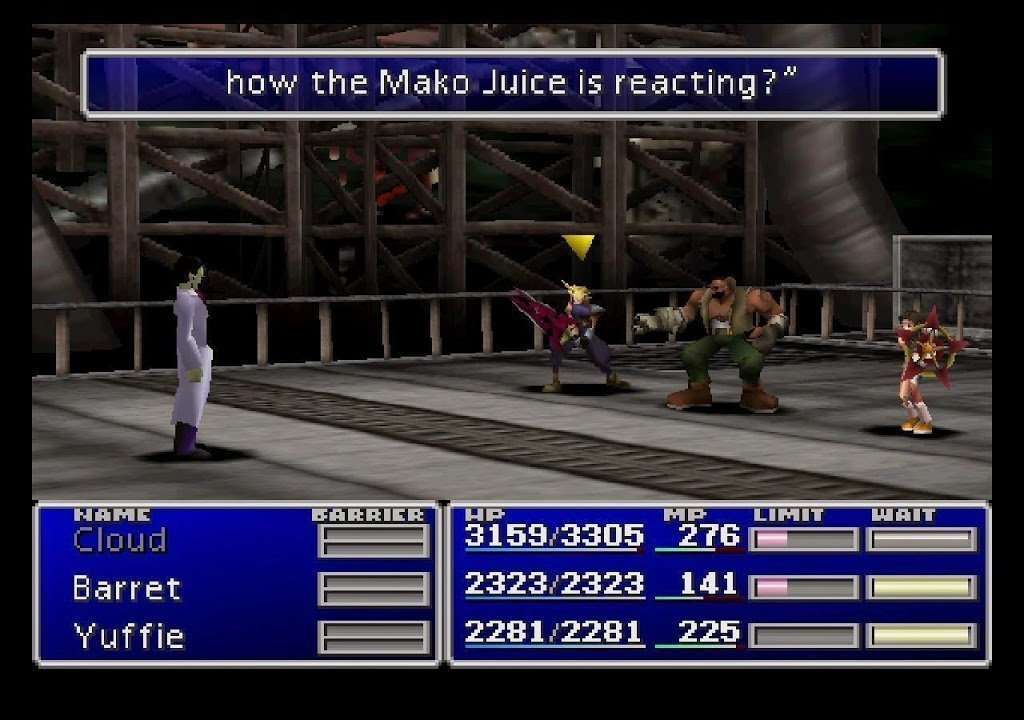 When it comes to graphics, Final Fantasy VII is an odd beast. Much the game’s background environment actually consists of pre-rendered artwork. I equate it to moving characters around on a matte painting. The characters are rendered in a very ugly blocky way for a large part of the game. I’m not really sure why this was done. When engaged in combat, the characters take on a much more realistic look as shown in the screenshot above. I suppose this difference has something to do with hardware limitations or something technical like that. But when I first started playing I found it to seem very odd. But it’s something that you get used to pretty quick. Occasionally, there’s also a few pre-rendered cutscenes that occur. These look dated by today’s standards, but for the time were top of the line.

Musically, the game is a masterpiece. Uetmatsu has once again provided a simply breathtaking score that really enhances the game. To this day many of the pieces of music found within this game are performed in symphonic concerts all over the world. The music, combined with a truly epic story and excellent character development, are the secret the this game’s legendary status.

As far as RPGs go, Final Fantasy VII is truly the legend that many claim it to be. There’s hours and hours of gameplay just in the main story alone. Not to mention tons of mini-games and optional bosses to challenge. One aspect of the game I’ve always glossed over until now was the ability to breed chocobos. For this playthrough I actually took the time to dive into this content and obtain the ever-coveted Gold Chocobo. This animal is needed in order to find one of the rarest materia pieces. I’ve always felt a little empty claiming to be a big fan of Final Fantasy and never having conquered this aspect of the game, now I can rest easy.

My biggest gripe here has not to do with the game itself, but rather with a somewhat poor localization. For the most part, the game is very well translated. The big issue here has to do with the name of a particular character. “Aeris”. Aeris is one of the main characters that you will meet very early on. Ok. Her name is Aeris. We all know that “Aeris” is simply an Americanized version of whatever her name was in Japan. This is typical. All is right with the world…. well, that was until later stories in the FFVII universe started to be released. You see, Final Fantasy VII is popular. As a result, there have been movies and games released that focus on the backstory and aftermath of this particular title. In all of those, her name has been retconned as “Aerith” – which in my opinion is a much better name. Obviously, SE is not going to go back and edit the default character name for digital releases of FFVII (but players are given the option to change it manually). But my question is, why not just keep her name as “Aeris” for the sake of continuity? I suppose because “Aerith” is a more proper translation. – Whatever. I’m ranting. — My point is, if you’re an OCD nut like me that cares about this kind of stuff, take that opportunity early in the game to correct the spelling of her name so your nerves can rest easy. 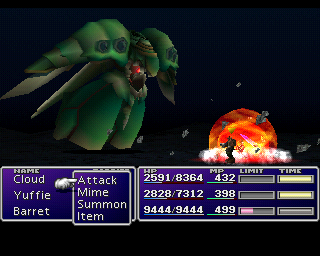 Difficulty: Medium–  Like most RPGs, this game features a few challenging battles and puzzles. But with patience, you can grind through and out-level most things. Completing the game certainly has it’s share of challenges, but it is the optional battles with the WEAPON bosses that offer the biggest difficulty in the game.

Story: There’s more story in this game than you can shake a stick it. But it can admittedly be a bit confusing at times. I don’t think I really understood some of the finer details to Cloud’s backstory until I played through the game two or three times to be honest. But as far at the main plot is concerned, it’s told very well and a real gripping tale.

Soundtrack: Final Fantasy VII boasts an enormous soundtrack that actually spans four CDs. The music for this game is very fitting most of the time. There are a few really odd, funky pieces that seem slightly out of place at times, but 99% of the time – the soundtrack compliments the game flawlessly. Stand out tracks are the character-based leitmotifs, as well as the ever popular One-Winged Angel (final boss theme)

Fun: If you like Japanese style RPGS, Final Fantasy VII is a must-play. It is considered by many to be required playing for anyone with a PlayStation. The game is engaging, emotional, and hours of fun.

Graphics: As I mentioned earlier, the graphics here are bit strange. We jump from unusual looking “lego models” to fairly detailed, but pixelated player characters. The 2D pre-rendered backgrounds are pretty, but they are in a fairly low resolution and there’s rarely any movement to them at all. To be fair, FFVII was Square’s first foray on the PlayStation. Later games in the series did seem to improve quite a bit. When it comes to the PC version, the game is available at a much sharper resolution and tends to be overall more attractive than the original release.

Playcontrol: No concerns here. The game controls are intuitive and play without issue on the native hardware. PC players on the other hand have a very awkward time ahead of them.

Value:  At the time of this writing, the game sells digitally on PSN for around $5.00. The game is usually listed on Steam for around $10-12, but goes on sale frequently. Honestly, any of these prices are more than great for this game. Even today, with as dated as this title is, I would have no problem spending $15 or more.

Overall score (1-100): 100 – This game is the subject of much hype but it does truly live up to it. FFVII is the perfect launching point for someone just getting into the series. Almost every defining aspect that the series has become is represented here in one way or another. From the storyline to the music, Final Fantasy VII is an experience every gamer should undertake. I recommend it even to those who are not RPG fans. 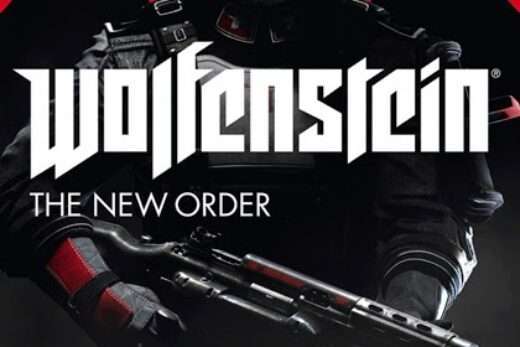 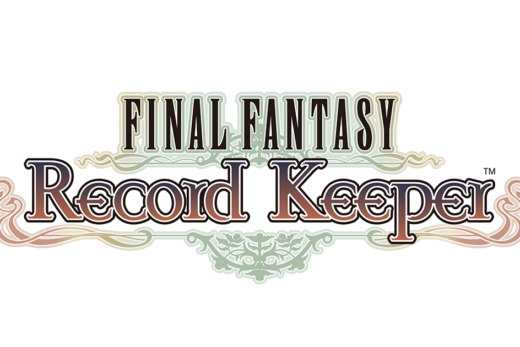 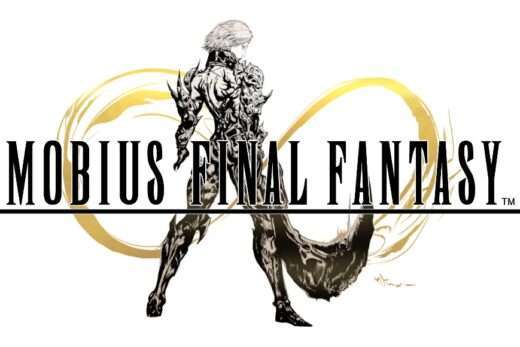 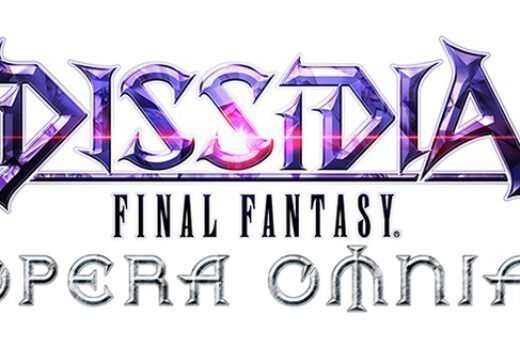 What's the oldest game in your library that remains unplayed?

A new PS5 update drops tomorrow, the first major one for this generation, and brings with it more storage options, new social features, and more: https://bit.ly/3mQmG60