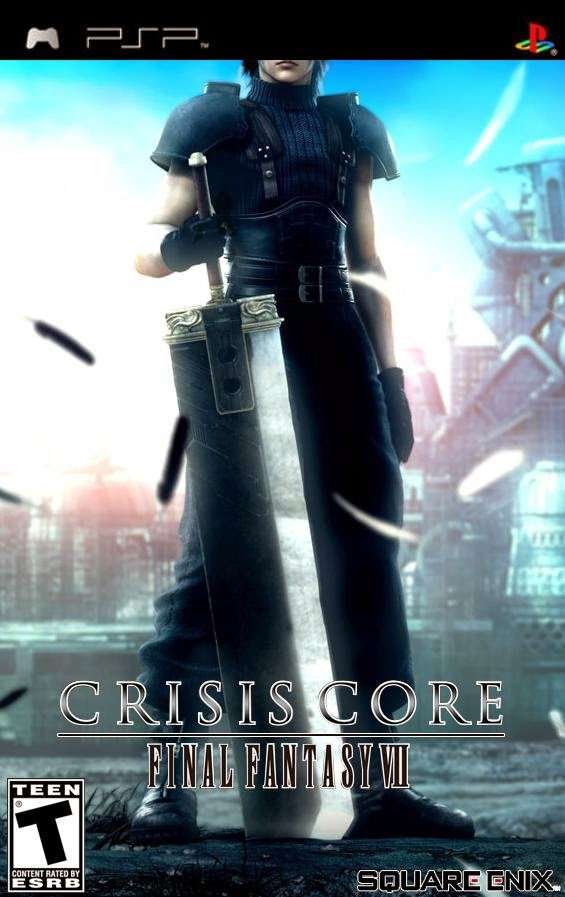 I feel like it has taken forever to get this review posted, but wow this was one long game. I know I’m technically supposed to be focused mainly on PS1 games right now, but having finished Final Fantasy VII, I decided to a deviate a bit and go ahead and knock rest of the entries in the “Compilation Final Fantasy VII” series.

Here we have a PSP game called Crisis Core. Chronologically, this is the first game in the VII series, but in reality it was the last game of the compilation to be released. I should also mentioned that this was actually my first time playing this title so I really didn’t know what to expect going in.

To get started, this game serves as the prequel to the original Final Fantasy VII title. In this game, we play as Zack and thus have the opportunity to learn about his backstory as well see a bit of what life was like prior to the events of the original title. Storywise, this game does an amazing job of filling in a lot of the missing pieces to the original tale. Throughout the game we get to see some familiar places and faces, as well as take part in some of the most legendary events in FFVII’s lore. 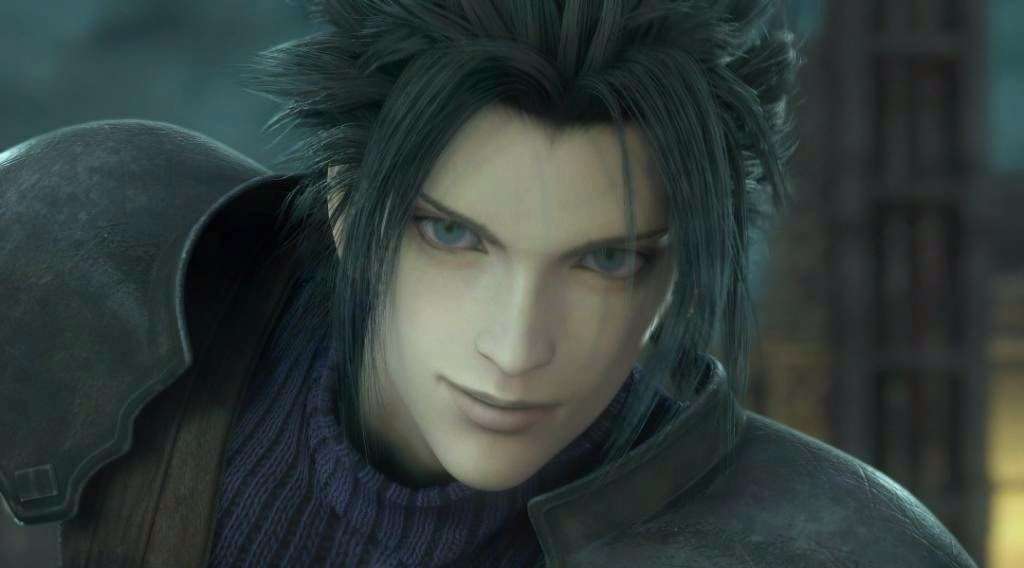 The story focuses on Zack as he rises from a mere entry-level member of SOLIDER to the prestigious First Class rank. We are introduced to his mentor, Angeal (the original owner of the famous Buster Sword) and we follow the two of them as they search for a MIA SOLIDER operative known as Genesis. As the story unfolds, we see our heroes team up with the infamous Sephiroth as they slowly unravel the mysteries behind Genesis’s disappearance. All of this eventually leads up to the epic “Nebelheim Event”, a crucial part of the VII backstory.

This game plays a bit differently from what I expected. While there are certainly heavy RPG elements here, the battle system is anything but the turn-based standard that I expected. Combat in this game is something of a hybrid between action-based button pushing and a menu driven system. What I mean by this is, Zack’s attacks are initiated with the push of a button, but there’s also buttons for dodging and blocking attacks as well. You can move Zack around in a 3-dimensional space while fighting. His attack will either be a simple melee strike with this sword, or a special ability. Abilities can vary depending on various types of Materia Zack may have equipped. There’s essentially two types of Materia that can provide Zack with new actions; command based materia (such as Jump, Assault Twister, Steal) or magic based material ( Fire, Thunder, Poison ).

The most unique thing about the battle system in Crisis Core is something called the Digital Mind Wave or D.M.W. This is sort of a limit-break system, that is representative of Zack’s inner thoughts during combat. It works a bit like a slot-machine, the entire time combat is ongoing, you can see the DMW in the corner of the screen. Once certain requirements are met, a special event will appear and depending on the slot-results, Zack will use a special move inspired by DMW outcome. For example, if Zack thinks of his girlfriend Aerith, he is granted with a special buff that heals him. Also, these events are the key to leveling up both Zack and the material he has equipped. The DMW starts out fairly empty in the beginning of the game, but it gets filled with more entries over time. Some of the strongest attacks in the game are only unlocked by participating in optional side quests. 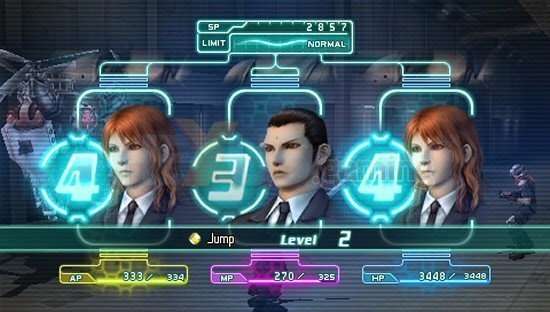 The key to mastering the game really lies in understanding the materia system. Materia levels up over time, and after a specific point in the game, you able to fuse two types of materia together to create newer, more powerful materia. Taking the time to learn this process is very beneficial. There are some attacks in the game that are able to deal 99,999 points of damage in a single hit. This is only possible by creating special materia through the fusion process. 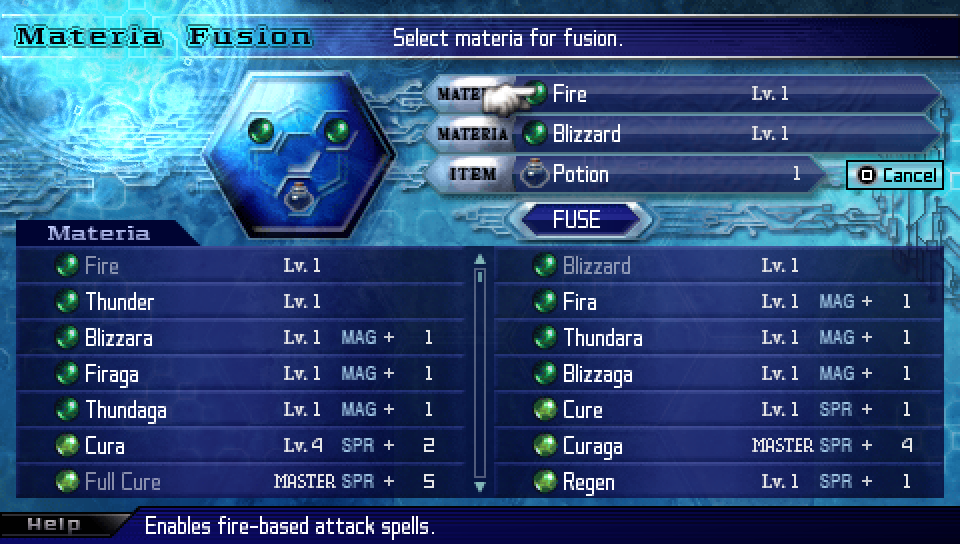 The main scenario is fairly straightforward and honestly doesn’t take all that long to complete. However, the game has an enormous number of side-quests available to participate in. These take the form of official Missions that Zack can take on as part of his involvement in SOLIDER. It’s thru these missions that some of the best items and gear in the game are acquired. The final mission, consists of a super-boss battle that probably one of the most difficult fights I’ve dealt with in recent memory. Even with Zack maxed out with the best gear and attacks in the game, it was no easy challenge.

Graphics-wise, the game is amazing. The pre-rendered cutscenes are breathtaking and the in-game action is nothing short of fantastic itself. This game is a prime example of what the PSP is capable of.  The graphics combined with a fantastic soundtrack make this a really impressive title and one worthy of the Final Fantasy name. 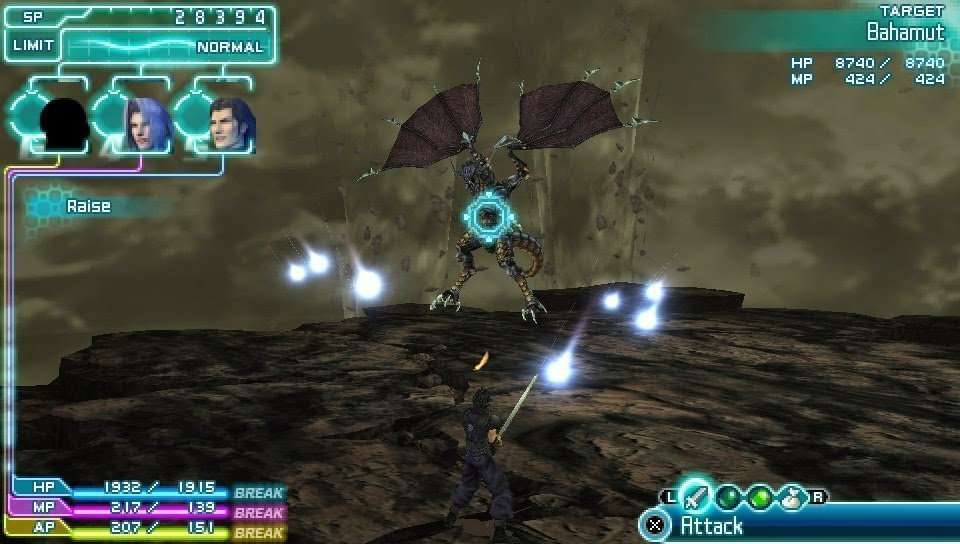 Difficulty: Medium–  I found this game to be bit more challenging than I originally expected. The action-based combat can be a bit tricky to master at first. Also, there’s a number of enemies throughout the game that can kill you in a single-hit regardless of how high your HP might be. Thankfully, most of this is restricted to the optional side-missions. If you have the patience, it is actually quite possible to get to a point in the game where you can create materia so powerful you can pretty much defeat almost anything in the game within 1-3 hits.

Story: This game does a fantastic job of filling in a lot of the blanks left by the ending of Final Fantasy VII. Here we get to learn of Zack’s story and his relationship with Aerith. As well, getting some insight into the madness of Sephiroth. We also get to see a younger version of Cloud and learn exactly how he comes into possession of his infamous sword. – Loose ends aside, this game also has a self-contained storyline that is fantastic in of itself.

Originality: Before starting this game, I was curious to see how unique it was going to be in contrast to the original game. I was more than pleased with what I discovered. Yes, this game takes place in the same world as the beloved FFVII, but manages to maintain a unique identity all its own. I think this is possible in large part to the unique combat system.

Soundtrack: Crisis Core features a very large tracklist filled with both old songs from VII as well as brand new tracks. It’s nice to hear better quality versions of some of the classic VII songs, and I found it not to be overdone either. The new songs actually seem to be on par quality-wise with many of those from original game. This was a nice surprise. My only complaint with the game audio comes not from the music, but from some of the repetitive catchphrases you hear during combat. By the time the game was over, I wanted to bang my head into the wall the next time I heard Zack declare “I’m on fire now!” – but that is small price to pay considering the overall quality of the game.

Fun: I found this game to be much more enjoyable than I originally expected. If you plan on tackling all of the missions in the game like I did, then be warned it can get a little grindy and repetitive. Side-quest grind aside, the game itself is very fast paced and quite a lot of fun.

Graphics: As I mentioned earlier, the graphics are phenomenal for a handheld device. The PSP really shines here.

Playcontrol: Overall the game controls work very well. However, I did experience some oddities here and there. The biggest gripe is have is camera control. The game does a decent job of keeping the camera centered on where it needs to be. But in a lot of cases I wanted to look around to find treasure chests. Using the shoulder buttons will swing the camera left and right, but not always in a full 360-degree motion. Also, sometimes when walking through doorways, the camera would swing around and cause some confusion about which direction I was headed. I would sometimes have to check the in-game map to make sure I kept going in the right direction. But other than these minor issues, no other complaints here.

Value:  This game still tends to sell for its original price of $30 if you can find it on shelves anywhere. As of the time of this post, the game is still not available digitally. I put nearly 50 hours into this game in my quest to finish all of the optional content so even at $30 I feel this game is well worth that price.

Overall score (1-100): 90 – I never thought I’d enjoy this game as much as did. It really packed a big surprise for a handheld title. I daresay this game shares near-equal footing with the original Final Fantasy VII. It is a shame that it’s not available on other platforms. If you’re a big fan of FFVII and you have access to an original PSP, I recommend this game without hesitation. In my opinion it is just as worth of the Final Fantasy name as any of the other stand-alone titles in the series.

Available today on:  Current Unavailable  –  (Updated as of Spring 2022)