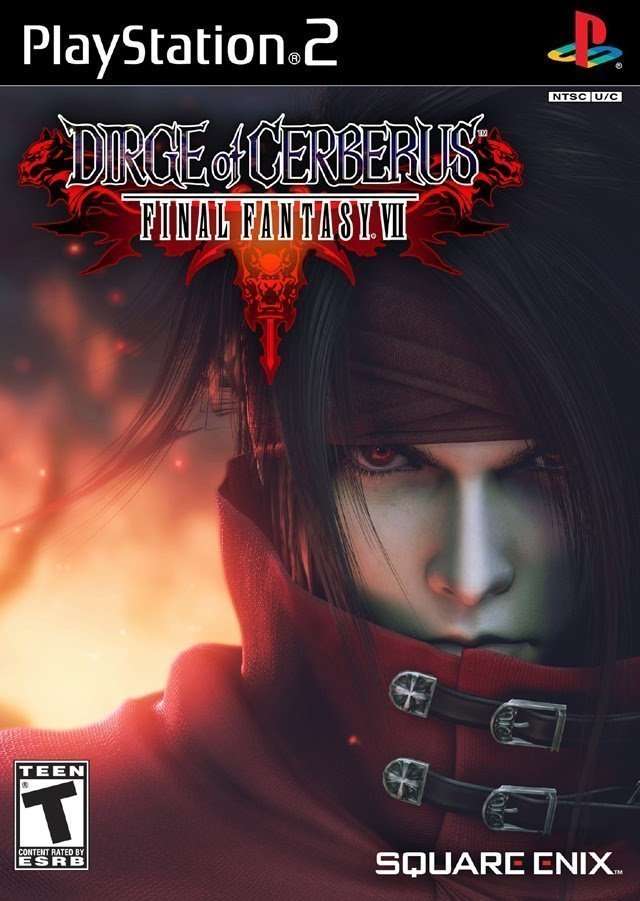 Next up and last on the list of Final Fantasy VII titles is the obscure, Dirge of Cerberus. This title is again another spin off from Final Fantasy VII and takes place last in the timeline for this subseries. The majority of this title takes place three years after the events of Advent Children and focuses mostly the character of Vincent Valentine.

The game explores a bit about Vincent’s past. In fact during the tutorial you even get to see Vincent as he was when he was a member of the TURKS (prior to the original FFVII). The main focus of the game, features Vincent as he teams up with a group known as the World Regenesis Organization. As learned very early in the game, during his years as a test subject for Shinra, Vincent’s body was fused with a special Protomateria. Now, an offshoot of Shinra wants to reclaim it for their own nefarious purposes. The mystery between the WRO and this “Deepground” Shinra offshoot continues to unfold as your progress through the game. The plot is revelaed through cutscenes that take place both during the game itself as wells as pre-rendered videos between levels. Fans of the FFVII storyline will be pleased to learn that many old faces do eventually make an appearance. In fact, I was very surprised to see one particular individual in the final ending cutscene… But you’ve got to be very thorough during the game to be able to unlock it. 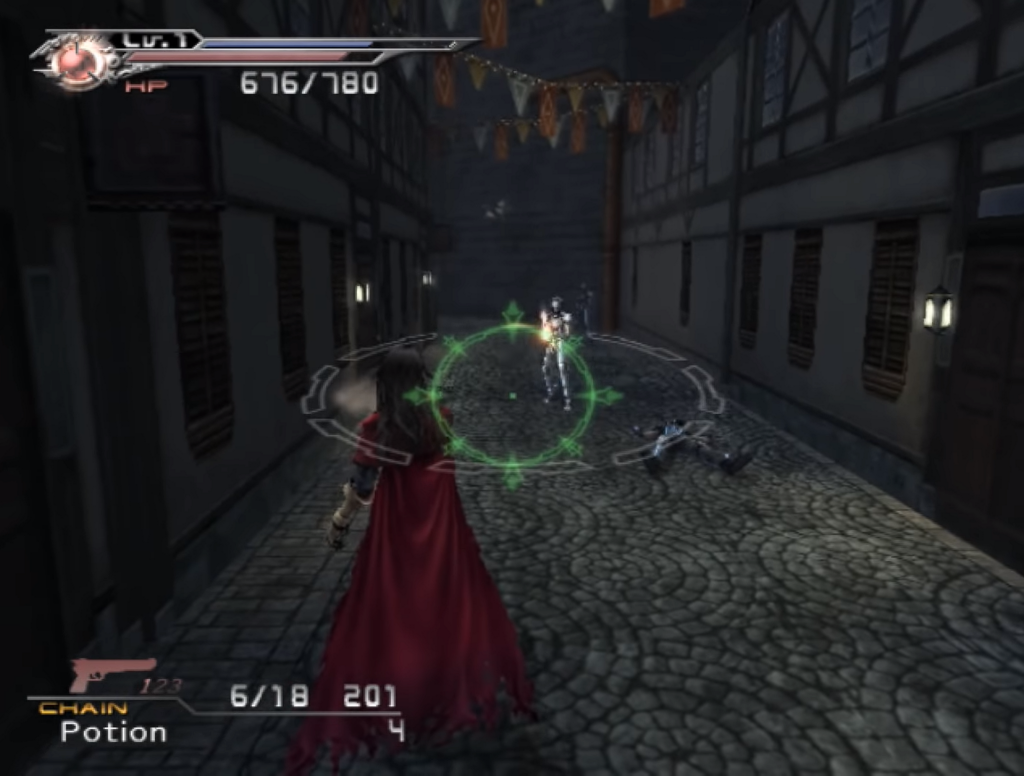 Storyline aside, this game is quite an odd beast. In fact, I’m not really sure how to really describe it. First thing, it’s NOT an RPG. Let’s be clear about that. Dirge of Cerberus is very much an action game. But not really one of any particular genre. The game is played from a third-person perspective, but it’s very much a shooter. Vincent can run, jump, shoot and also attack with his hands. Potions and other power-ups can be consumed on the fly to recover health or activate other special moves. For example, the Limit Breaker item allows Vincent to transform to a werewolf-like creature for a limit amount of time.

The game is very linear, moving from one chapter to the next. At the end of each level, you are awarded with points. These can be used to either level up and make Vincent stronger, or they can be converted to money which can then be used to purchase new items or upgrades for Vincent’s firearm. Learning how to customize the guns in this game is quite a crucial skill to acquire. For most of the game I kept a short range pistol, a long range rifle, and then a second rifle customized with a sniper scope. I found this to be the best “go-to” mix. As far as using the experience points earned, I found it best to alternate from one level to the next – exp, money, exp, money, etc. 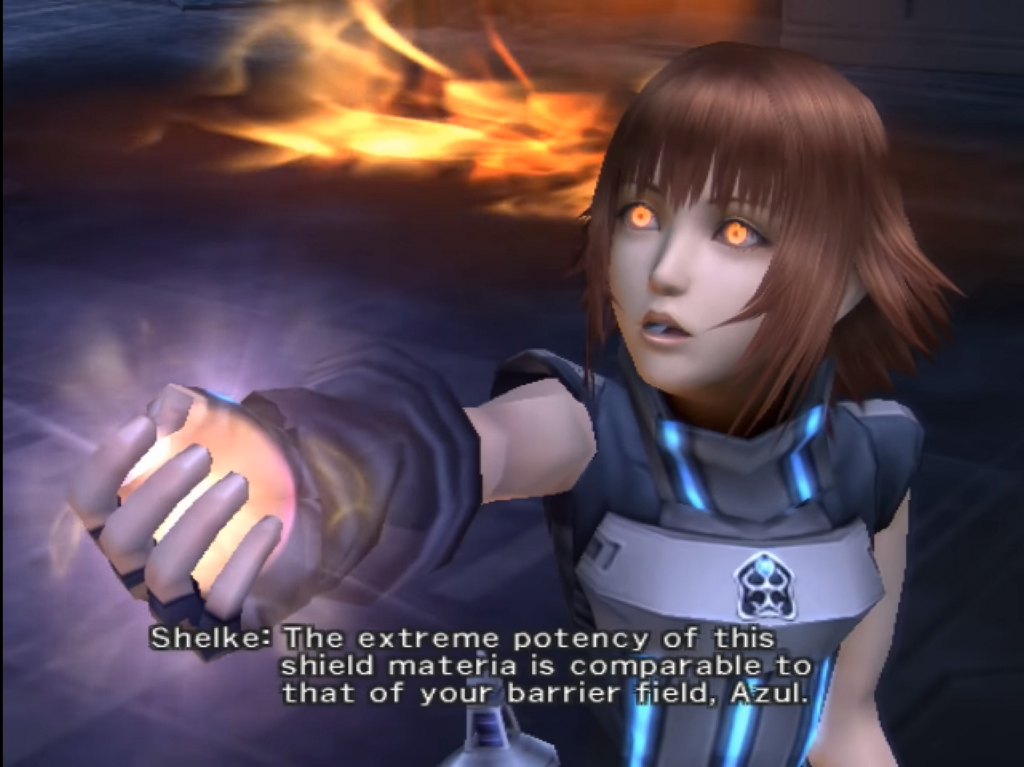 The game controls are very unusual at first, and to me, did not feel very natural. But, I did eventually get the hang on them. The third-person camera seems pretty accurate, but my biggest complaint was with the targeting system. Switching between targets is a bit of pain. This is even more true when you are trying to run around and avoid enemy attacks. The targeting system is a customizable a bit, but still either way you slice it, it’s not a good experience.

The combat system here is both the game’s best and worst feature in my opinion. It’s certainly unique and very bold for a game that bears the Final Fantasy title. But I feel like it is a bit unrefined and it just feels like it was not ready for prime time. The storyline is what really drove me to see the game all the way to completion. Had this not been a Final Fantasy game with great cinematics, I doubt I would have bothered to finish it.

Despite my complaints above, there are some really good aspects to the game. The visuals and audio are fantastic. And even though I feel it is flawed in it’s execution, the overall concept of the game is interesting and has potential. I doubt it would ever happen, but I think I’d really like to see a more modern version of this game on newer hardware. I think maybe where this game fell short for me is due to it being a bit ahead of it’s time.  There are many games these days with a similar play style that seem to do a much better job at the “third person, action RPG” concept. 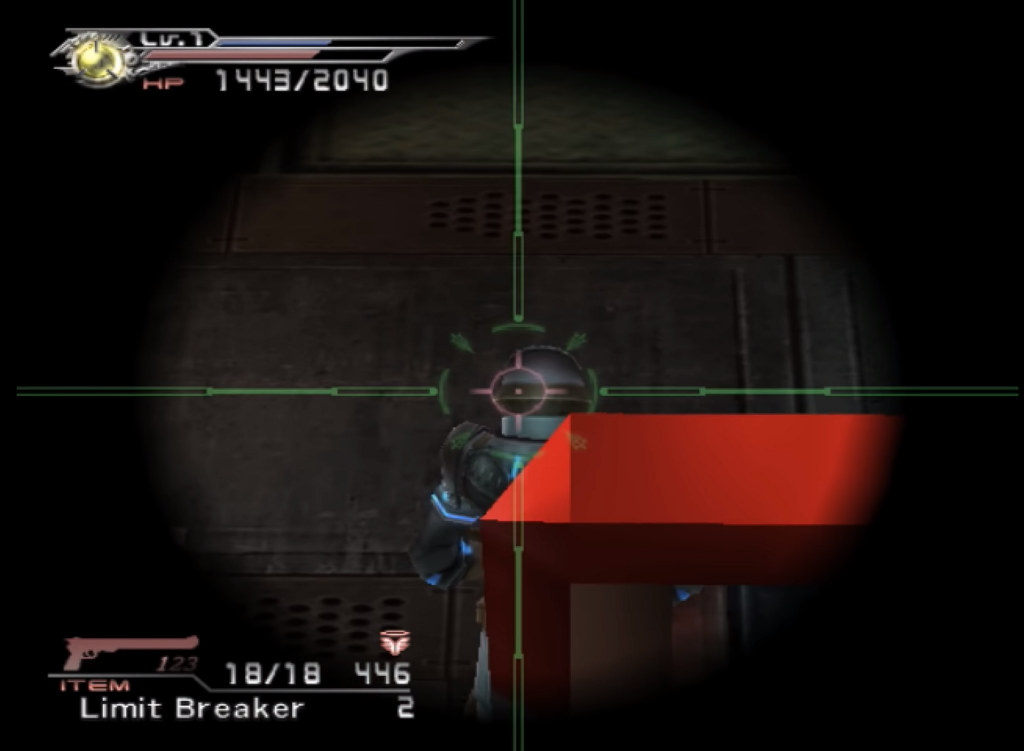 Difficulty: Variable –  There are several difficulty settings to choose from. More after completing the game. These seems to be balanced pretty well. I do recommend playing on the easiest setting if it’s your first time experiencing the game. Once you have a handle on the controls and the basics of the game, it may be safe to kick it up a notch for a bit of a challenge.

Story: The storyline here is phenomenal. It’s actually much more elaborate than I expected. To be honest, I sort of assumed that the game would be pretty shallow in terms of lore. Having a husk of an outline so that there was a reason to play a shoot-em-up as Vincent Valentine. I was happily mistaken. This game does a fantastic job at shedding some light on one of the more mysterious characters from the Final Fantasy VII roster. As well, as casting new light on some already familiar events

Originality: This game was published in 2006 and at the time, was quite unique. The title tries to merge third-person action with RPG elements and to an extent actually succeeds. My complaints were more with the overall execution. Learning how to customize your weapons is key to mastering the game. This aspect is certainly interesting and unique. Dirge is certainly a very different experience.

Soundtrack: Overall the game soundtrack is very well done. There’s some really nice background music, but there’s also a few snoozers. The title contains a really good J-Rock tune by Japanese musician Gackt. The voice acting in the game is a mixed bag, but not particularly bad.

Fun: Dirge of Cerberus certainly has its moments. The action can be exciting, but sometimes repetitive. I found the levels to be somewhat boring and uninspired. But they were diverse enough to keep the game moving along at a decent pace.

Graphics: Overall, the graphics are very well rendered for a PS2 title. The game has a very somber tone, and I feel that the art direction intended to convey that. But as a result it’s very dark and gray. Sometimes it’s difficult to see enemies between the haze and pixels. Due to this, I experienced more than a couple deaths. The pre-rendered scenes were very well done.

Playcontrol: Probably my biggest gripe here. The camera and targeting system are adequate, but feel very un-optimized. So much so that I feel the game suffers as a result.

Value:  The game itself is fairly short. I finished it in about ten hours. There are some unlockable and collectables that may make the game worth playing again for some people. In Japan, there was a multiplayer aspect to the game. Here in the US, that was cut so the single-player portion of the game could be polished up a bit more. At least that’s what the claim is. If it’s true, I’d dread seeing the original Japanese release. Having some multiplayer features would have certainly made this game more interesting. I can imagine enjoying this title much more with some form of PVP combat. But of course network play did not really take off on the PS2.

Overall score (1-100): 55 – This one of those games that you either play or skip. It’s really up to you. If you’re a big fan of the Final Fantasy VII universe, it may be worth your time. If you’re looking for a good third-person shooter, there are much better options out there. Again, despite my complaints, I do think that a more modern version of the game would be much better received. Sadly, I don’t see that happening.