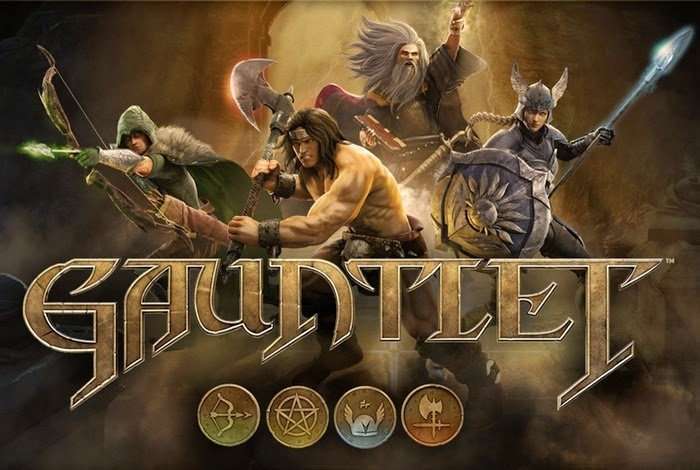 If you’ve hung around on this blog awhile, you know that I love old games. The very first video game I ever played as a young child was an arcade version of Centipede. Back in those days, home consoles just didn’t have the technology to compete with a full sized arcade cabinet. Some games could only be experienced at an arcade room. Gauntlet was one of those games.

Gauntlet was a fantasy/dungeon themed multiplayer game. You could be a Warrior, Valkyrie, Wizard or Elf. Each character having slightly different attacks and playstyles. The object was to delve deep into a maze filled with endless hordes of monsters and earn as many points as possible. Aside from that, there really wasn’t much to it. The game was brutal and often times unfair. The ultimate goal was to get the highest score possible and earn your bragging rights.

To me, it always stood out as one of the first video games I ever played that could actually talk. “Your life force is running out!” The game would mumble those words as you neared death. Luckily, the reaper could be kept at bay if you were willing to sacrifice another quarter into the coinslot. 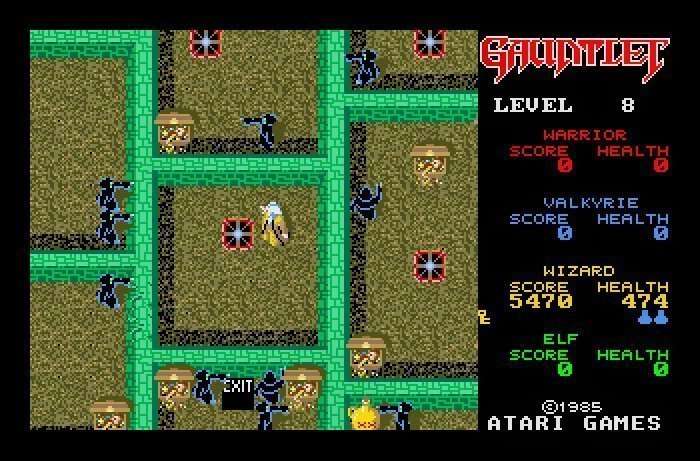 The original game is all of its glory

Over the years there have been sequels and remakes. Each game drifting further from the roots of the original. Many of them good games, but they didn’t seem to capture the magic of the original title.  Now, Arrowhead studios has brought us a modern take on the classic. A fresh look, simply named: Gauntlet.

Right off the bat, the new Gauntlet is very similar to the original. Overhead view, the same characters with the same general playstyle, waves and waves of enemies, and the snarky voice is back. There are of course, several changes. First of all, the game looks fantastic. Gone are the days of 8-bit pixels. Here we have beautiful accelerated graphics and dynamic lighting. Visually, the game is everything you could hope for when it comes to a modern version of the classic title. 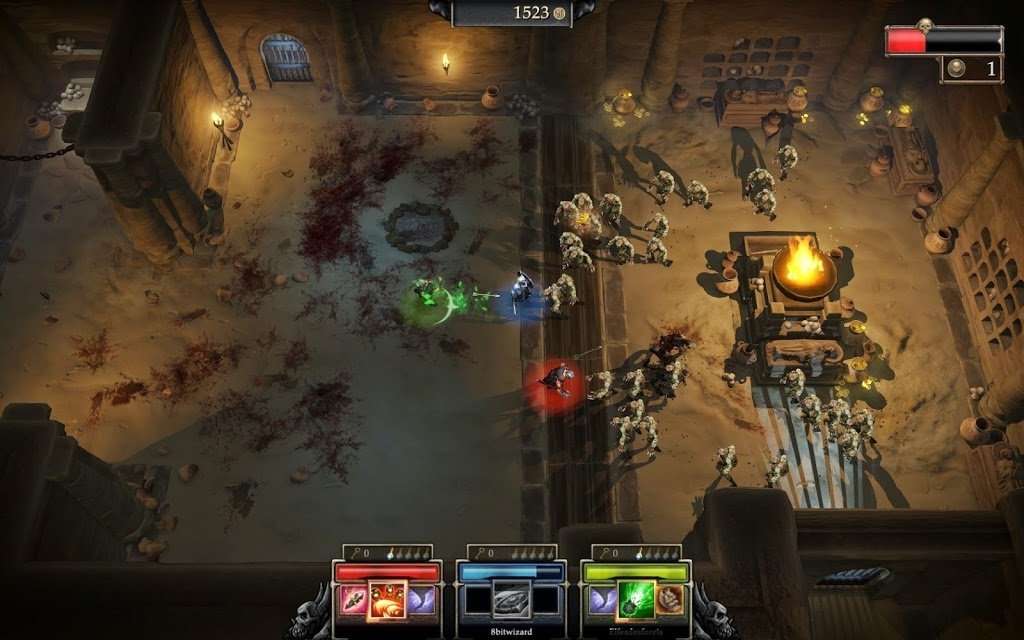 Where the game differs is not so much in the way it is played, but rather with the addition of some much needed features. In this new version of Gauntlet, the gold you find while plundering the maze can be used to purchase new skills and upgrades for your character. Skills can be executed at will as long as your character has a potion to consume. The key to mastering the game is pairing specific skills with the different characters and leveling them up over time. For example, the Elf, a ranged fighter would not benefit very much from a skill that immobilizes nearby foes. It may come in handy from time to time, but not as much as it would if he were a Warrior, fighting in close quarters.

As characters take damage, their life force diminishes. This can be restored by eating plates of food that are found within the maze. Of course, like in the older games, it’s possible to accidentally strike the food and destroy it. So it is important to be mindful and not simply dash around swinging blindly.  If a character does die, they can be revived. Much like the arcade days, this is accomplished by spending a “coin”. However, you longer have to dig deep in your pockets to keep playing. In this version, coins are earned as you defeat enemies.

The purpose of the game is to work your way through the “gauntlet” and uncover three mysterious relics. The game is broken up into three, multi-level dungeons. Each dungeon has a special boss to defeat. 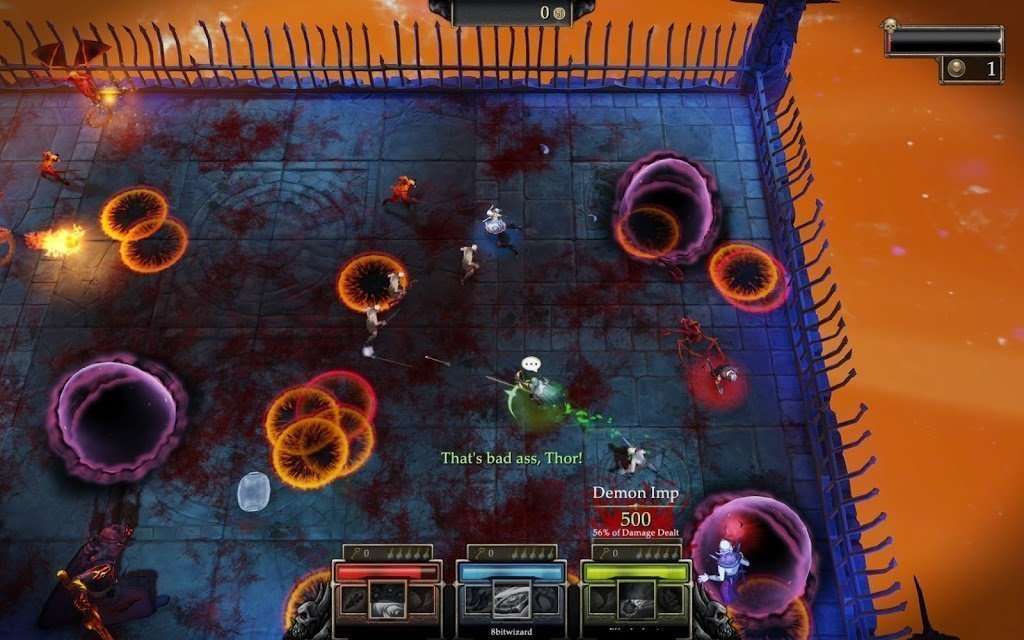 When it comes to progressing through the game, your progress is saved separately for each character. It can be fun to switch around, as each character controls and works completely differently. Ultimately, you’re likely to find a favorite. Gauntlet can be played single player, but to be honest this game is best played with others. Up to four players can team up (one of each class) to take on the dungeon.

For the Steam version of the game, multiplayer is as simple as either creating a new game and making it public or joining an existing game. Sadly, it seems that already even after a week or so since its release the number of players has dwindled a bit. But there’s still plenty of players to be found if you’re patient enough to wait a few minutes. 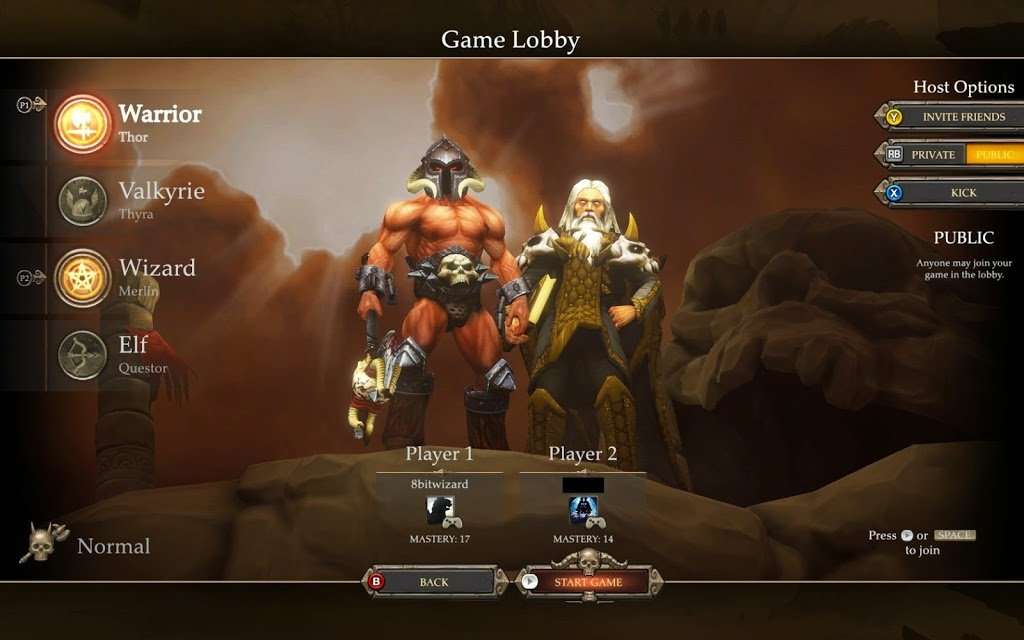 Difficulty: Variable –  The game offers a number of difficulty settings. Easy, Normal, Hard and Unfair. These are aptly named and quite accurate. For a new player, I would recommend starting on easy at first. Once you have a feel of things, Normal is the way to go. Hard mode and Unfair can only really be recommended for multiplayer games.

Story: The story here is pretty minimal. There’s a brief set up during the tutorial followed by some narratives as you progress through the game. Most of the meat of the story can be found in the digital comic book that was available to players who preordered the game.

Originality: Being a remake of a classic arcade title, there’s quite a bit of added content to keep the game interesting. Ironically, it’s the lack of new features that actually manages to keep this game feeling fresh. They don’t really make games like this anymore and playing Gauntlet was a really nice change of pace.

Soundtrack: Overall, the game soundtrack is very well done. The music is fitting and tends to ramp up at appropriate times. The voice narrative is excellent. All of the classic one-liners are present in this version.

Fun: Gauntlet is a bit of a niche game to be honest. I think it will appeal most to older gamers such as myself. That being said, the real fun here lies in the online play. Other players really add to the experience and as always, Gauntlet is best played with friends.

Graphics: The developers really seems to nail the graphics just right. The art direction, lighting and overall feel is spot on.

Playcontrol: Ok. Here we go. Gauntlet is a PC game and offers two options. Mouse/Keyboard or gamepad. That being said, this is “gamepad game”. I highly recommend playing with an Xbox 360 style controller. Playing with a keyboard is possible, but not very intuitive at all. I hated it.

Value:  At release, Gauntlet sells for $20. This is a fair price if you enjoy this type of game. If you’re not sure if this is the game for you, you may wish to wait until it goes on sale or the game sees a permanent price drop. The game itself is somewhat shorter than most modern games, but it is very replayable. The developers have hinted at future DLC content and additional levels coming down the pike. Time will tell.

Overall score (1-100): 70 – I enjoyed my time with the game and felt satisfied with the purchase. After completing it, I decided not to uninstall it. Every now and then I get an itch for some hack and slash casual gaming and Gauntlet seems to satisfy that need. Fans of the series will not be disappointed.