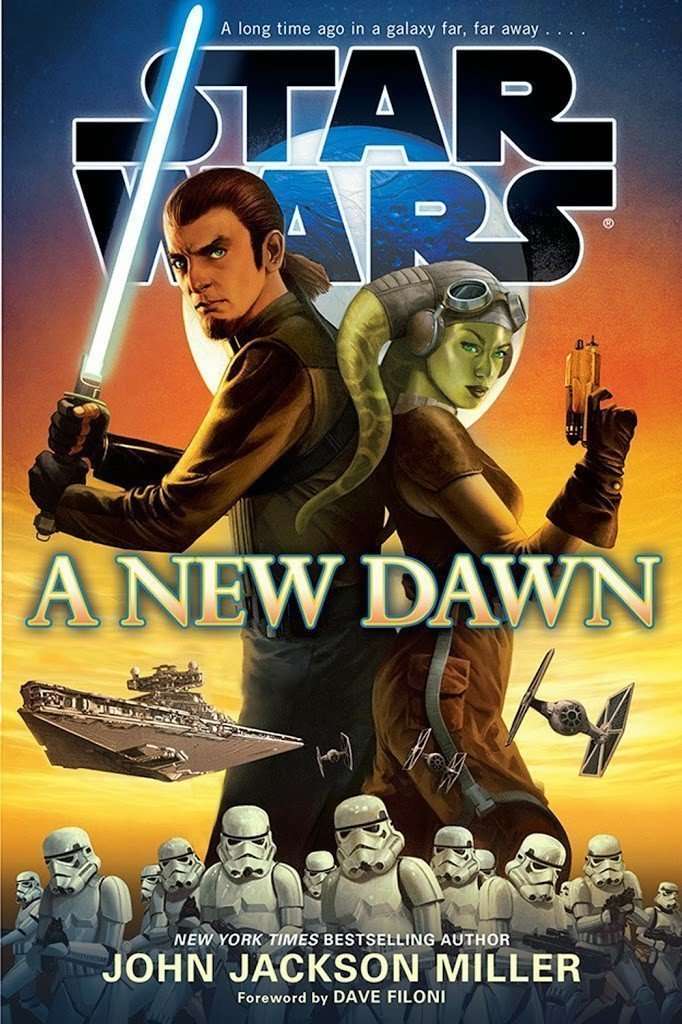 Mere moments before the premier of the new Star Wars series on the Disney Channel, I managed to finish reading my copy of Star Wars – A New Dawn. This book is unique for a number of a reasons. First, it is actually the prequel to the Star Wars Rebels TV show. Second, it is the first Star Wars novel released under the new unified timeline. This means the story contained within this book is considered to 100% official.

For years, fans of Star Wars had to contend with the fact that while there was a plethora of written material out there for them to consume, any or all of it could be overwritten and invalidated at any moment. For the most part, this is didn’t happen. In fact, in several cases George Lucas would often borrow elements from the novels or comic books and incorporate them into this official stories. (Case in point, the name “Coruscant” was originally created by an author, and then added into Star Wars: The Phantom Menace). But occasionally, there were conflicts. For example, there was a whole backstory for the character Boba Fett detailed in a series of books. this was later completely overwritten when Boba Fett’s origins were revealed in Episode 2. Now, for fans, this scenario is no longer a concern.

So here we have A New Dawn by John Jackson Miller, one of my favorite Star Wars authors. And as always, he does not disappoint. As I mentioned earlier, this book actually details the backstory for two characters that star in the new television series: Star Wars Rebels. The story focuses on Kanan and Hera. Two characters that until now, we have never heard of before. Creating books around new characters in the Star Wars universe has always been tricky. First, it’s hard to introduce a new character and make them interesting. Second, it’s even harder to make them the centerpoint of an entire story. But Miller manages to do this nicely.

The lead character is that of Kanan. Kanan is a bit of a drifter a “rough around the edges” kind of guy who is always on the move from job to job and planet to planet. Kanan has a secret. He was a youngling in training to become a Jedi Knight when the purge came at the end of the Clone Wars. He witnessed first hand the destruction of the order by the hands of the Empire. After managing to escape, he has lived a life on the run, concealing his true identity and trying to put the past behind him.

When the story begins, he is a materials handler working for a mining corporation. All is well until the Empire takes a sudden interest in the planet where he is working. It is at this time, that he encounters the mysterious Hera. A young woman who seems to be on a mission seeking those who might have grievances with the Empire. At first, his interest in her is purely one of a flirtatious nature. But eventually, he comes to realize there is much more to this woman than meets the eye.

Considering that this book is the set up for the upcoming Rebels TV series, I don’t think it will be much of a spoiler to reveal that eventually, Kanan and Hera join forces and end up working together to cause some much needed chaos for the Empire in the end.

All in all, this book is very well done. John Jackson Miller does a fantastic job of introducing these characters and making you care about them. Everything here feels right. This book does a great job of capturing the tone of the time in which it take place. The evil Empire looms above and sees all things. Even some of our heroes are a bit reluctant at first, but are driven to strike by the very brutal nature of the Emperor’s oppression.

I finished this book nearly twenty minutes before the debut of the new show so the characters were very fresh in my mind when I sat down to watch the premier of Rebels. I must say that the characters in the book match perfectly with what was presented on the screen. Mr. Miller did a fantastic job of staying true to the characters that were outlined to him by Lucasfilm. I can only imagine how much of a challenge that must have been.

Story: Fast paced, and engaging. New, interesting characters A wonderful set up to a new era in Star Wars storytelling.