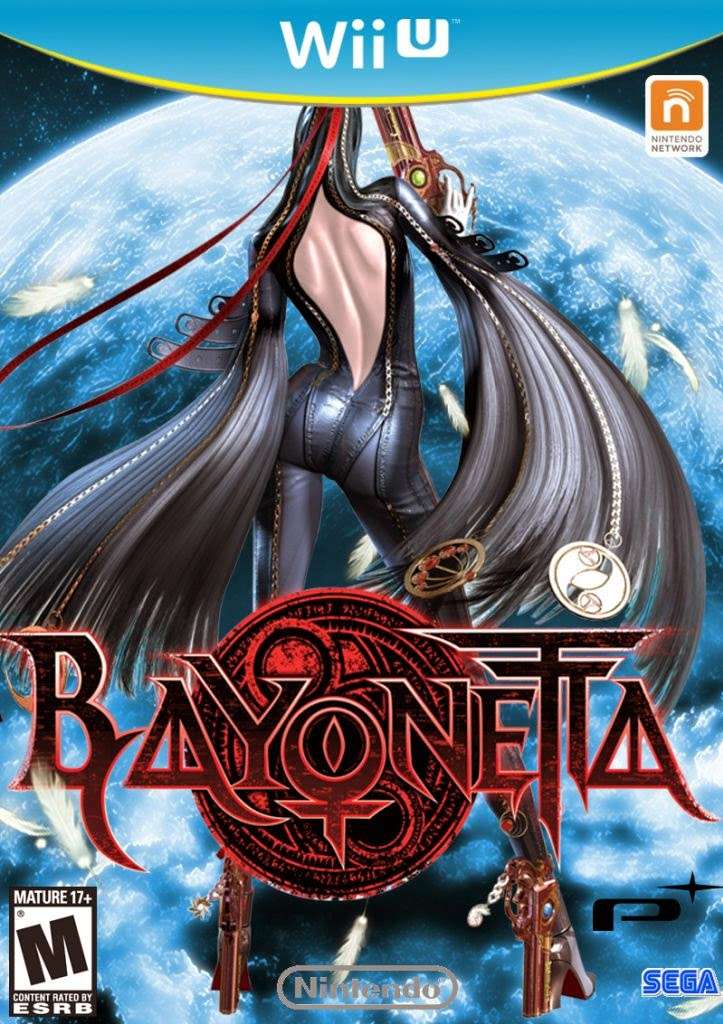 I know October has come and gone, but I’m still working on my spooky Autumn game list with a review of Bayonetta. Granted, there’s pretty much nothing spooky about this game, but it is about witches! (Very sexy witches.) I figure that’s close enough to count.

For this review, I played the new Wii U version of Bayonetta. This game was original available on PS3 and Xbox 360, but I never managed to find the time to check it out during its original release. Recently, Nintendo landed a Wii U exclusive with Bayonetta 2. All first print copies of that game come with an On-Disc version of the original. The game is also available for sale digitally from the Nintendo eShop.

For the most part, there is very little difference between the Wii U version and the original. The graphics are a bit sharper, but nothing that is too noticeable. The biggest difference here seems to the inclusion of a few cosmetic (Nintendo-themed) costumes for the character, and a new control scheme that takes advantage of the Wii U gamepad. 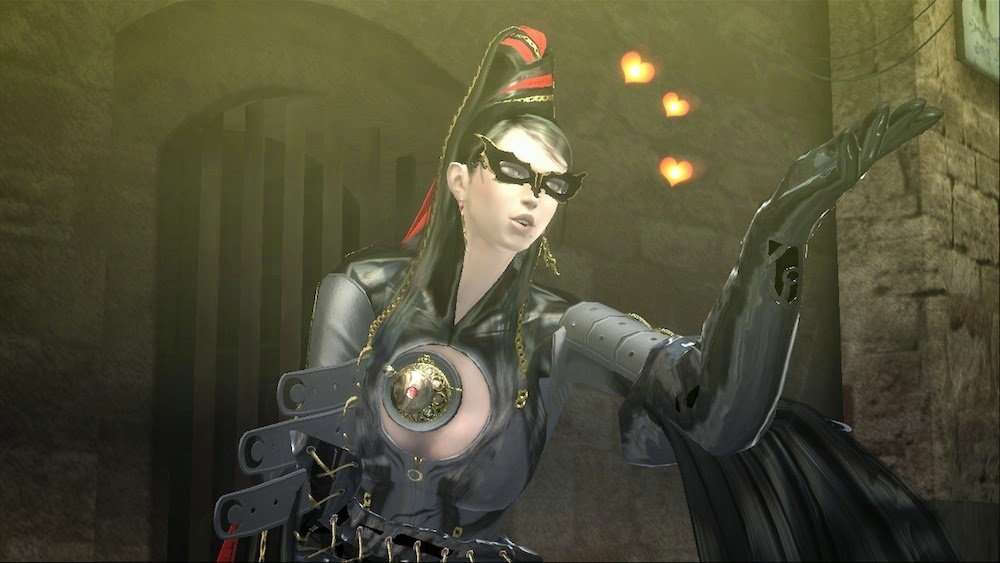 In this game, you play a witch known as Bayonetta who has recently been awakened from a 500 year slumber. Bayonetta has very little memory of her former self but still has all of her magical abilities. Bayonetta is able to slip between the material world and a sort of Astral Plane. This allows her to interact with angels and demons and see things that the mortal eye is unable to detect. The beginning of the game finds Bayonetta working as a paranormal bounty hunter of sorts, while trying to piece together her past. Her search takes her to a luxurious European city of Vigrid, a place that teeters on the brink between both the normal world and heaven itself. From here, Bayonetta will slowly unravel the secrets of her past.

Bayonetta is action game unlike any other that I have every played. Although, I understand that it is not the first of its kind, this is the first time I have ever experienced a game with combat of this sort. In a nutshell, I would define this title as “non-stop action fighting”. You control Bayonetta as she fights wave after wave of angelic and demonic monsters. Combos are the name of the game here. Various attacks can be chained together to unleash powerful assaults. Occasionally, you will be able to use a “torture” move on your opponents. This includes a special cinematic followed by rapid button mashing. 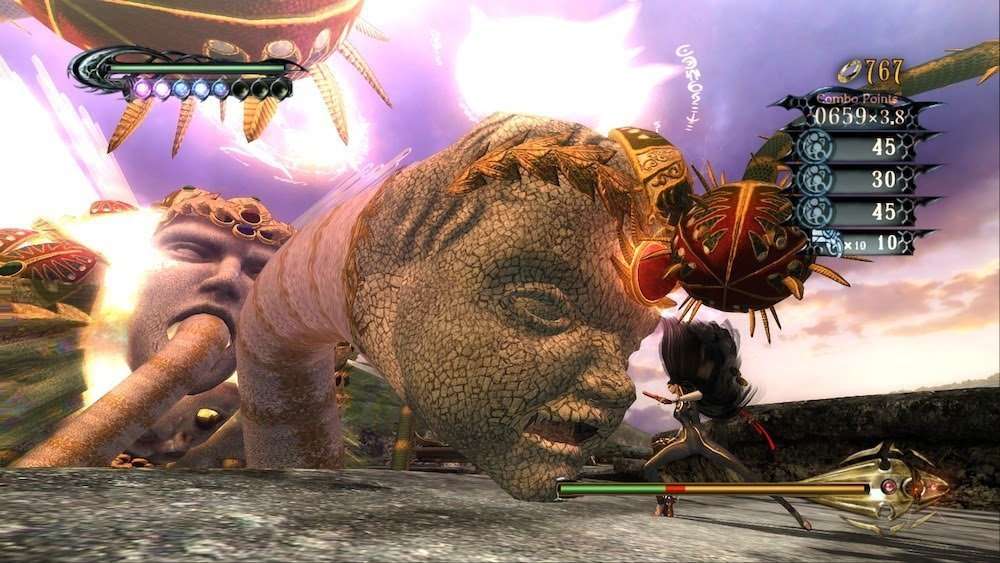 The better you perform in combat, the greater the rewards. The game uses a form of currency known as Halos. From time to time, Bayonetta can visit a shady bar on the outskirts of hell to cash these halos in for new weapons or abilities. There’s also a number of collectible and consumable items to be found throughout the game.

Regular enemies actually seem to be somewhat rare. Most battles are quite unique and tend to have an almost “boss-like” feel to them. Once an encounter is over, your performance is scored and there’s a little exploration before the next big encounter pops up.

From time to time, the action shifts to almost mini-game like events: racing down the highway on a motorcycle, combat while surfing, riding rockets as they rip through the sky. There’s never a dull moment. There’s even a shooting-gallery style mini-game after each level that can allow you to earn power-ups and consumables.

When I first popped this game in, I wasn’t sure what to expect. I purposefully stayed away from spoilers and I have to admit I was quite impressed. If you’re a fan of fast-paced action games, this is certainly a title that should be on your list. Just be aware that it’s very mature. 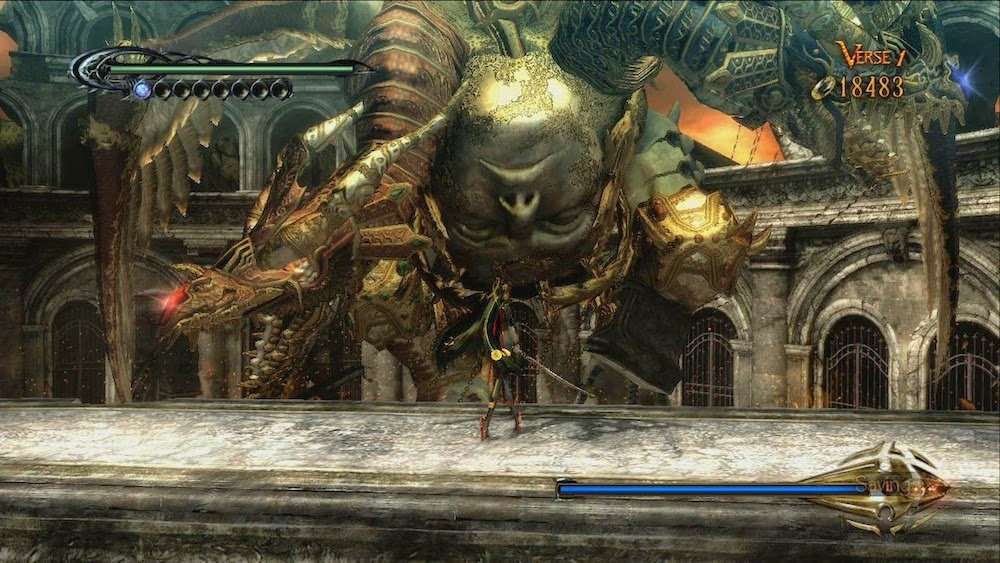 Difficulty: Variable –  Bayonetta features multiple difficulty levels that suit just about all types of players. It’s important to note that both the Very Easy and Easy mode of the game REALLY simplify things. These settings make executing combos automatic and really reduces the amount of skill required to complete the game. For most players, I would recommend playing at least in Normal mode to get the most out of your experience. There’s also secret levels and secret bosses that can be uncovered by meeting certain requirements in the game. I found these to be much more challenging than anything in the main scenario.

Story: The storyline has a lot of potential to be interesting, but I found it over all to be a bit confusing. There’s very little set up to game, so at the beginning things are very chaotic. As you play through the game more and more pieces start to fit together and eventually the whole scenario is all but handed to you. But even at the end of the title, I was still left scratching my head a bit. The presentation needed a bit of polish.

Originality: I understand that in many ways the gameplay here is a homage to Devil May Cry. This is a game that I have actually never played, so to me, Bayonetta was a very unique experience. However, I’ve heard from others that even if the formula is similar, Bayonetta really refined and enhanced the combat action of DMC. Taking it into a level all its own.

Soundtrack: This game has a very quirky soundtrack. A recurring song in this title is the classic “Fly Me To The Moon”, but performed with an almost J-Pop style twist. The whole score has a very over-the-top feel to it, but for some reason it actually manages to suit the game instead of seeming ridiculous. The voice acting is very well done and adds quite a bit to the characters.

Fun: I had a total blast with this game. It was much more fun that I actually expected. Usually, I’m not all that good at these beat-em-up type of titles. And this one certainly had its share of challenges. But I never once felt stuck or frustrated. All in all, Bayonetta was a very enjoyable experience.

Graphics: Regardless of which system you may play this game on, the graphics are going to look great. Wii U players may notice a slight bit of clarity here, but it’s really nothing worthy of mention. This game is gloriously beautiful. I love angel/demon type fantasy art. This game has plenty.

Playcontrol: I can only speak for the Wii U version here, as I have not actually played it on any other system. But I can tell that either PS3 or Xbox will probably feel just a tad more natural that the Wii U port. The Wii U gamepad is quite a large device, and not really suited for this type of game. That being said, I played this title on the gamepad and really have no complaints. The game is playable using either the traditional buttons or with the touch screen. Also, Wii U users are welcome to use either Wii or Wii U classic gamepad. I did find using the classic controller to feel a bit more natural and comfortable. But all in all, there’s not much difference here. The game plays great using any of the control schemes I tried.

Value:  If you act fast, and can manage to a get first-run copy of Bayonetta 2, you can get this game for free with your purchase. Alternately, Wii U owners can snag this title for full price from the eShop. If you’re not interested in in the Wii U version, finding a used copy of either PS3 or 360 version is the way to go here. There’s not really anything of value offered by the Wii U version that just screams “gotta have it”. The main game is just short of about 10 hours of play, but you can get a lot more out of it if you’re going for some of the hidden levels, etc.

Overall score (1-100): 80 – As fan of unusual games, this is certainly one that caught my eye. I had been meaning to check out this title for years and this recent re-release was the perfect reason to finally take the plunge. Bayonetta makes no bones about what it is: an over-the-top, action packed, fighting game. If that is your thing, then by all means grab a copy of this game. I had a great time with it. I did feel that the main scenario was a little short, and the story was rather odd and unsatisfying. But the Bayonetta more than made up for these shortcomings with it’s exciting gameplay.