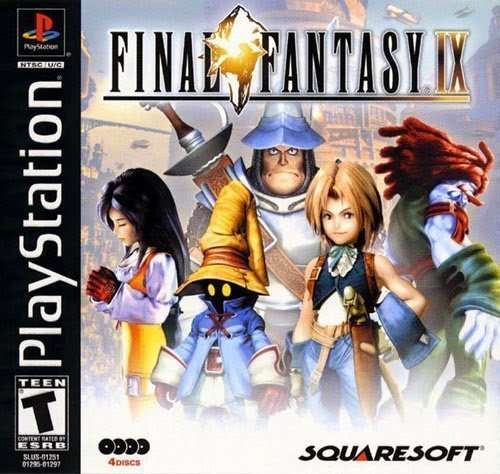 Today, I give you my review of Final Fantasy IX. The last title in the series released for the original Sony PlayStation, and the largest game in the franchise yet. My first encounter with this game was seeing a large cardboard display for it at the local Babbages store. I went inside and inspected a copy of the game. I remember examining the characters on the front and thinking how marvelous this game must be. But at the time, I did not own a PlayStation and I wouldn’t for several years. In fact, I didn’t finally get my hands on this title until around 2004. At which time, I played it to completion. This review marks only my second time playing this title from beginning to end.

This game focuses on the story of Princess Garnet and a swashbuckling bandit named Zidane. Garnet is the princess of the Kingdom of Alexandria. At the beginning of the game, Zidane and his roguish band of troubadours are visiting the kingdom to perform a famous play. However, they have an ulterior motive;  kidnap the princess and hold her for random. Surprisingly, the princess ends up being a willing participant as she secretly wishes to escape the walls of the castle. Chaos ensues as Zidane and Princess are pursued by one of Alexandria’s knight’s; Steiner. Through a series of misadventures, our heroes and their companions soon learn that Garnet’s mother, Queen Brahne is not the benevolent ruler they all believed her to be. In fact, the Queen is embarking on a violent conquest of neighboring kingdoms. As the game progresses, the heroes will uncover the truth behind the Queen’s motives and a shocking secret of epic proportions – told in the style that only a Final Fantasy game can deliver. 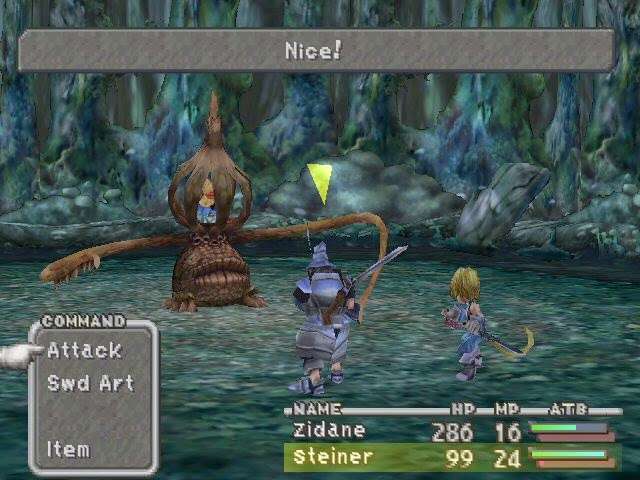 To start, let say that this game represents the best looking entry in the series so far. What started out a little rough in VII, and cleaned up a bit more in VIII, we now have an example of what the PlayStation hardware is really capable of. The overall graphics here are much improved over any other the other PS titles in the series so far. Yes, there’s still pixels, but that’s to be expected considering the generation of the game. The character models are clearer than ever before, the background graphics are detailed, and the FMV cutscenes are wonderfully rendered.

As far as gameplay is concerned, one of the first things I noticed about this title is that, with the exception of combat, Final Fantasy IX is very different than any of its predecessors. First of all, There’s all sorts of unusual pointers and icons that appear on the screen from time to time. These are there to help focus your attention on various things. For example, one I found particularly annoying is the “hand pointer”. This icon will appear above the head of your character at random, just in case… you forgot who you are playing. Thankfully, this can be disabled. Also, unlike other entries in the series, there’s items and things scattered all over the place. So as you play, you will constantly want to poke around every corner waiting to the a “?” bubble appear over your character’s head, as this indicates they have found something of interest. Regardless of this pop-up, it’s very easy to skip over an important item or clue.

Skills also work very different in this game. Unlike other games, where character skills are learned by leveling or through some other means, in this title, abilities are tied to specific items. For example, a “Plumed Hat” might teach your character a certain ability or spell. As long as the item is equipped, your character has access to the ability, and the longer they wear it during combat, they will slowly learn it for themselves. Once an ability is learned, your character will always remember it, even without the original item equipped. While I found this very interesting in concept, in practice it ended up being very annoying. Often times in the game, I would have better, more efficient equipment at my disposal that I was hesitant to use, because I was still trying to learn abilities tied to older, worse equipment. 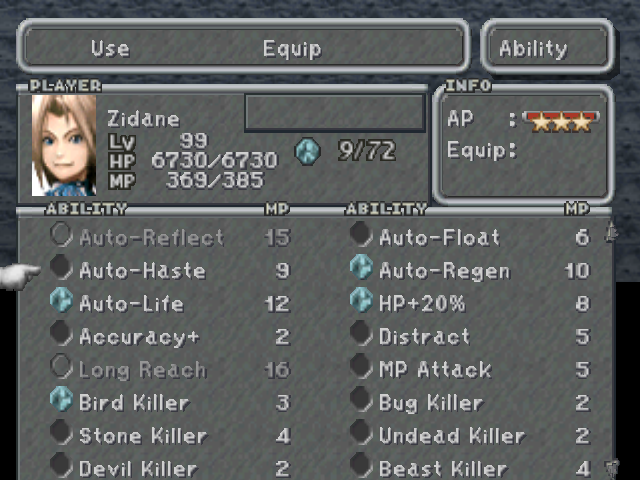 Other than these odd deviations, Final Fantasy IX will seem familiar to any fan of the series. All the regular Easter Eggs and expected themes are present. Moogles, Chocobos, Summons, etc. In fact, in many ways, Final Fantasy IX is a bit of a fan service game. This title leans away from the futuristic setting taken by some of the more recent games in the series. Instead, it’s very much a fairy-tale style fantasy. Many of the character’s names and even a large portion of the musical score harken back to earlier entries in the series.

Speaking of similarities, just like in Final Fantasy VIII, we have another playable trading card-based mini game here. Tetra Master. Just like in FFVIII, you can acquire cards throughout the game and challenge NPCS to card matches. However, unlike Triple Triad from VIII, Tetra Master seemed largely uninspired and a bit more confusing. Also, the rewards for actually playing the mini-game are minimal. In my opinion, Tetra Master is a big dud. 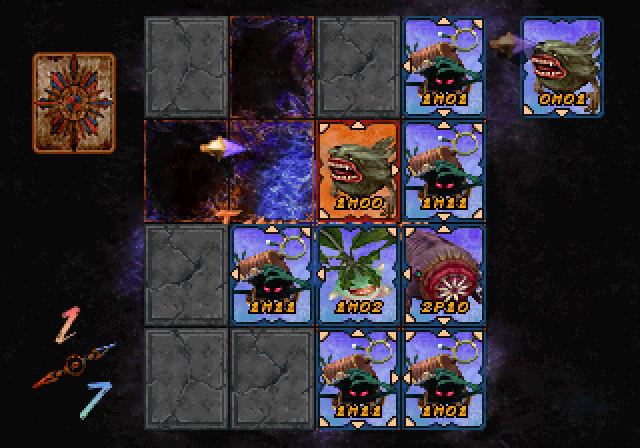 With so many lackluster notes on the review thus far, you may wonder if Final Fantasy IX is worth your time when there are so many other brilliant games in the series. Well, the answer is yes. Despite it’s many shortcomings, Final Fantasy IX features one of the most epic storylines in the series to date (in my opinion) and it is masterfully told. More so than ever before, every character in the game has a tale worth telling. Plus this time around, you can dive much deeper into the background of the game. Throughout your time in IX, you will be prompted to view Active Time Events. These can be skipped, but if you choose to watch them, you will be treated to a short behind-the-scenes scenario or two that helps flesh out the details behind the current plot.

As expected, there’s also a lot of optional content in the game as well. Collection-based quests, mini-puzzles, and of course…. delivering mail for moogles. If you enjoy these types of things, you’ll get out what you put in to it. In a nutshell, if you’re a fan of Final Fantasy, this is a must play game. If not, or if you’re new to JRPGs, there are better games to play to get your feet wet. I could certainly classify this as a game for the semi-hardcore RPG player. 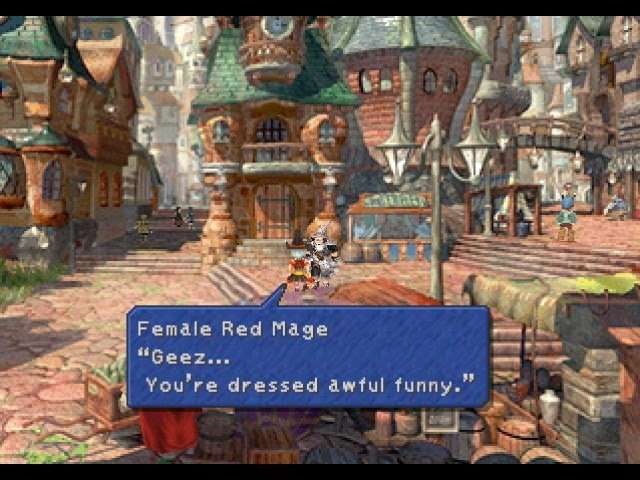 Difficulty: Medium –  In the early stages of the game, there’s actually several challenging encounters, but as time goes on, things get much, much easier.  If you’re a completionist like me, and take the time to do all of the optional side quests, the rewards you receive will end up making this game a piece of cake. If not, expect a mild challenge.

Story: Final Fantasy IX features an incredibility good storyline. From the opening scene of the game until the extremely emotional ending, the plot will suck you in. Everything that makes the Final Fantasy series so renown is represented here.

Originality: When you’ve reach nine entries into a series, it can difficult to keep things original without losing sight of made the franchise so great. FFIX manages to toe a very fine line in this regard. The game feels familiar, but also oddly out of place at times, and not always in a good way. Some of the game mechanics, while original, seem cumbersome or somewhat forced.

Soundtrack: Sadly, Final Fantasy IX features probably some of the least memorable music in the series thus far. To be clear, there are some real winners here. Melodies of Life is probably one of the greatest Final Fantasy compositions yet. But a large majority of the soundtrack seems a bit dull and uninspired. Not to mention, a fair bit of it borrows from previous games in the series. I understand the idea behind this is to spark a bit of nostalgia, but in this case, it just wasn’t very effective. Despite my complaints, the quality of the game sound is spectacular. Overall, it just doesn’t live up to the reputation earned by other games in the series.

Fun: I had a bit of a love hate relationship with the game this time around. I was sucked in at the very beginning, but around the second disc I just didn’t have much motivation to play. Happily, the game really picks up towards the end and features a conclusion that’s nothing short of fantastic. But there was a “fun lull” in the middle of the game that I cannot ignore.

Graphics: This game really shows just what the original PlayStation is capable of and also just how much Square was able to master the system in terms of graphic capability. Nothing but praise here.

Playcontrol: I found the playcontrol in FFIX to be much improved over the other PS games in the series. No real complaints whatsoever. Everything feels natural and responsive.

Value:  In terms of content, FFIX is the biggest entry yet. My playthrough reached well over fifty hours. So there’s plenty to do here. In fact, the only way I was able to complete this game in a month’s time was due to a weeklong staycation I had in the middle of the month. Considering this title usually goes for $10 digitally, or can be found used for as low as $5, you’ll more than get your money’s worth.

Overall score (1-100): 80 – Final Fantasy IX is a solid example of the series thus far, but it is not perfect. While complete and well worth your attention, it is easily overshadowed by other entries in the series, as well as other RPG games of the age. Despite whatever shortcomings it may have, it still have the honor of being an exceptional game in its own right and one every RPG fan should experience at least once.