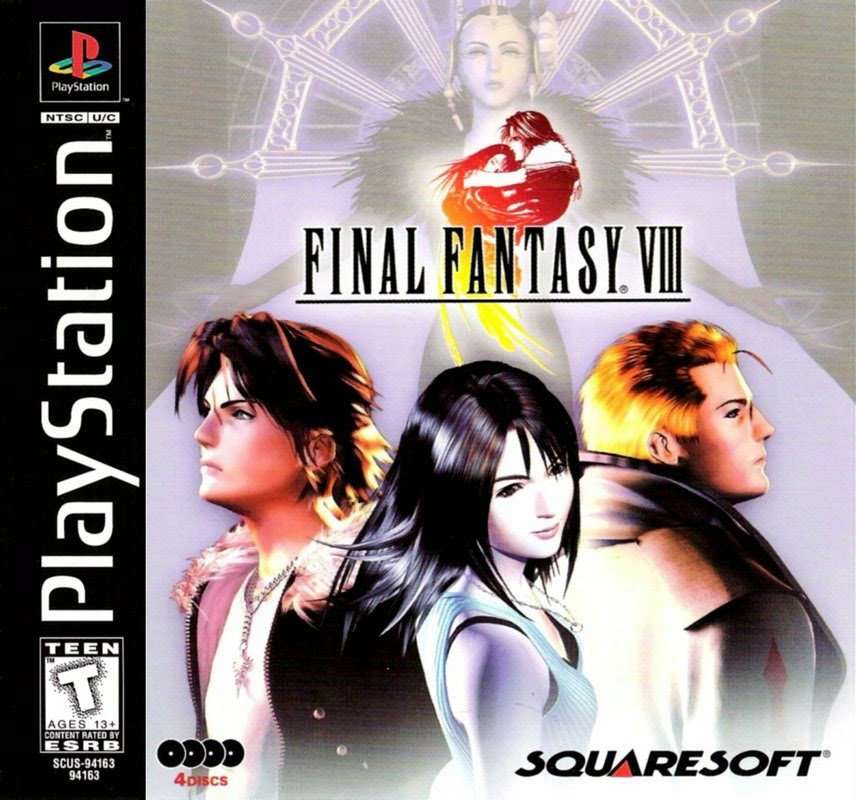 As stated in the previous post, I’ve started my quest of playing through the remaining Final Fantasy games in order to catch up as quickly as possible. With new games just around the corner, I want to experience them while they are still hot and fresh.

Next up on the list is another PlayStation title and one of the more obscure entries in the series, Final Fantasy VIII. This game was released in 1999.  I originally received it as a gift in the PC format. I was excited to give it a try but I didn’t get to tinker with the PC version very long before life managed to turn my attention to more adult things. A few years later, I ended up snagging a PlayStation copy. I have fond memories of playing through this game around the time of 2003-2004, when my son was still an infant. I used to sit in my armchair and play FFVIII while he slept soundly in his crib. This play session is the first time I have touched the game since then. So this was only my second time playing FFVIII to completion.

Final Fantasy VIII is quite a bit different than the previous games in the series. This game focuses on the character of Squall. Squall is a young man and a member of a mercenary academy called Balamb Garden. The goal of each student is to graduate and become a “SeeD”. When the game first starts, Squall and his companions are preparing to take their final exams. Upon graduating, Squall and his teammates are assigned a mission to assist a small group of revolutionaries. During this mission, he finds himself involved in a massive effort to save the world from an evil sorceress. We’ll stop there in efforts to remain spoiler free. But needless to say, the storyline to this title is another epic masterpiece from the storytellers at Squaresoft. There’s something here for everyone; fantasy, science fiction, romance, camaraderie, and betrayal. 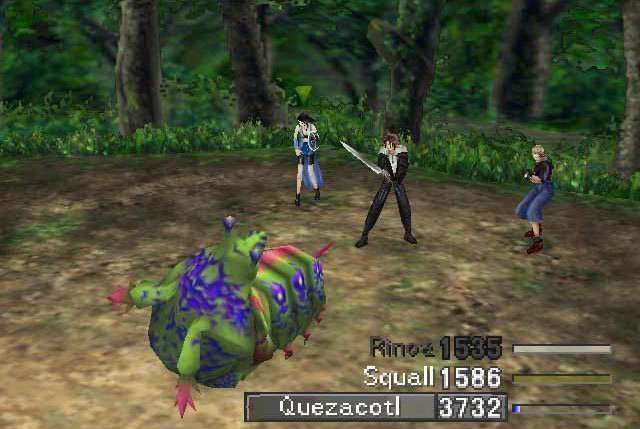 The graphics in this game as quite different from those in Final Fantasy VII. Instead of being blocky and cartoonish, the art direction in this game is much more realistic. However, as a result, the characters and monsters are more pixelated in appearance. The background and environmental art seems to be a small step up in quality when compared with FFVII. Personally, I’ll take the pixels when compared to the odd Fisher-Price looking character models from the previous game. Also, like VII, this game has a number of FMV style cutscenes. These also seem to be a step up in quality from the previous game.

When it comes to the soundtrack, Final Fantasy VIII is fantastic. The music in the game in wonderful. There are few random duds, but the majority of the game score is phenomenal. Final Fantasy VIII also has the honor of being the first game in the series with a fully vocalized main theme song. The track Eyes on Me is performed by Chinese artist Faye Wong and has since become one of the most beloved themes among franchise fans. A few years ago, I was lucky enough to be able to attend a Final Fantasy orchestrated concert. My biggest excitement came from hearing several songs from this title performed live. It’s really that good. 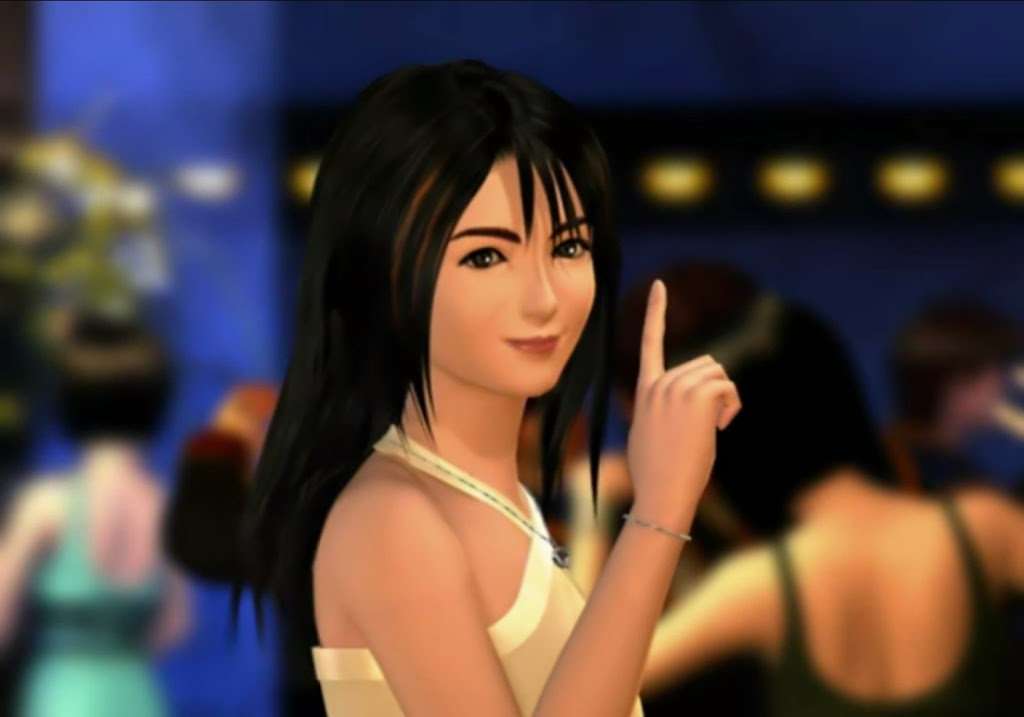 So with an epic storyline, and wonderful score, you might wonder why you don’t hear much about Final Fantasy VIII these days. Well, the honest answer is: gameplay. The mechanics in this game are really different than anything we’ve seen in the series before. First of all, character levels are pretty much pointless in this title. As your characters level up, so do the monsters they battle. So no matter what level you are, you’re almost always on par with whatever you’re fighting. Character stats are not directly related to their level. Instead, vital statistics are increased by junctioning magical spells to your characters. For example, having Fire spells junctioned to your characters Hit Points will cause your HP to increase. Having ninety-nine spells junctioned will  cause a greater increase than having a mere ten spells.

Since the stock of spells has direct relation to your character’s stats, spells are a little harder to come by in this game than in others. In Final Fantasy VIII spells are not purchased or learned. Instead, magic is most often “drawn” from monsters during combat. Instead of attacking, you can spend your turn using the DRAW command to increase your spell arsenal. Different monsters hold different spells. Naturally, some of the most powerful spells are very rare. 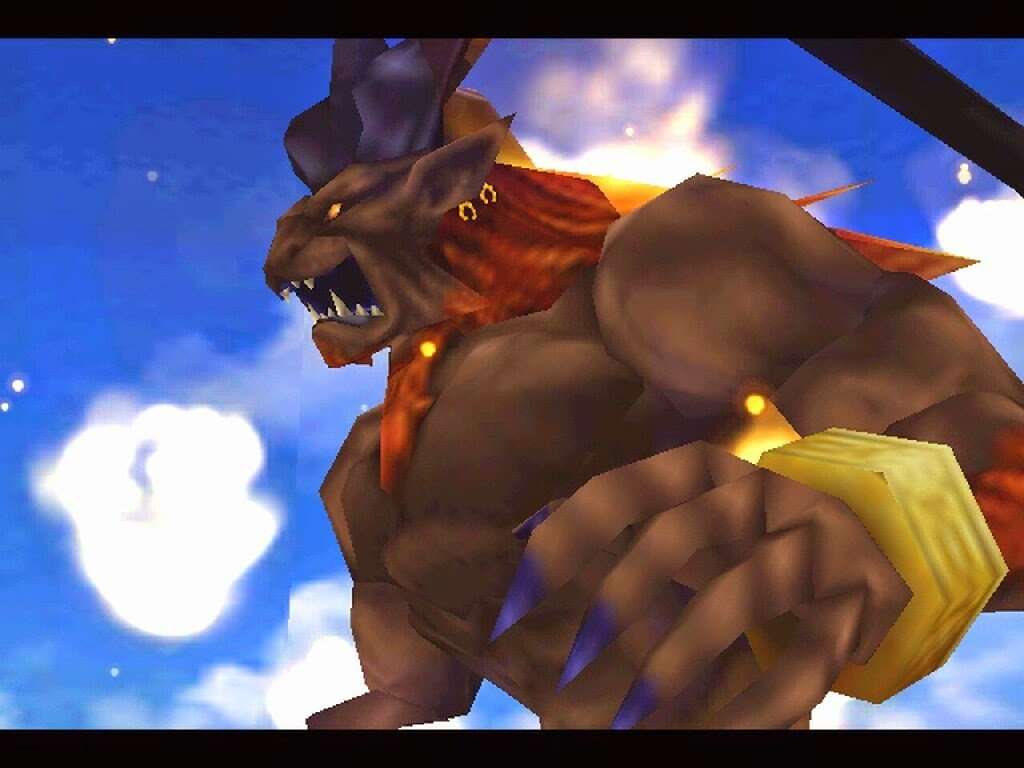 In terms of storyline, this works because characters can choose to bond with supernatural beings known as Guardian Forces. These GFs are responsible for making junctioning possible. GFs also level up over time and can learn new skills and abilities. These perks are then passed on to the character. GFs also have another function. They can be summoned into battle. As general rule, GF attacks are some of the most powerful in the game. Most of the classic Final Fantasy summons are represented here in the form of GFs: Ifrit, Shiva, Bahamut, Cactuar, etc.

All in all, this new system is quite complex and can seem daunting to new players. Once you understand it, it really makes for some interesting gameplay. The possibilities are endless. But even I do feel that it is a bit overly complicated. Unnecessarily so.

One last unique feature in Final Fantasy VIII is the mini-game, Triple Triad. This is an optional card game that you can play with various NPCs. It’s very similar to many real-world collectible card games. The ultimate goal here is to defeat opponents and win rare cards. This does have a purpose as cards can be converted into items. Some of which are very rare and powerful. Triple Triad also ties into a few side quests later in the game. A version of this game actually planned for future release in the online title: Final Fantasy XIV. So fans of both games have something to look forward to.

Overall, Final Fantasy VIII is a great game, but it does have its quirks. Patience is important for this title but the outcome is a very rewarding experience. 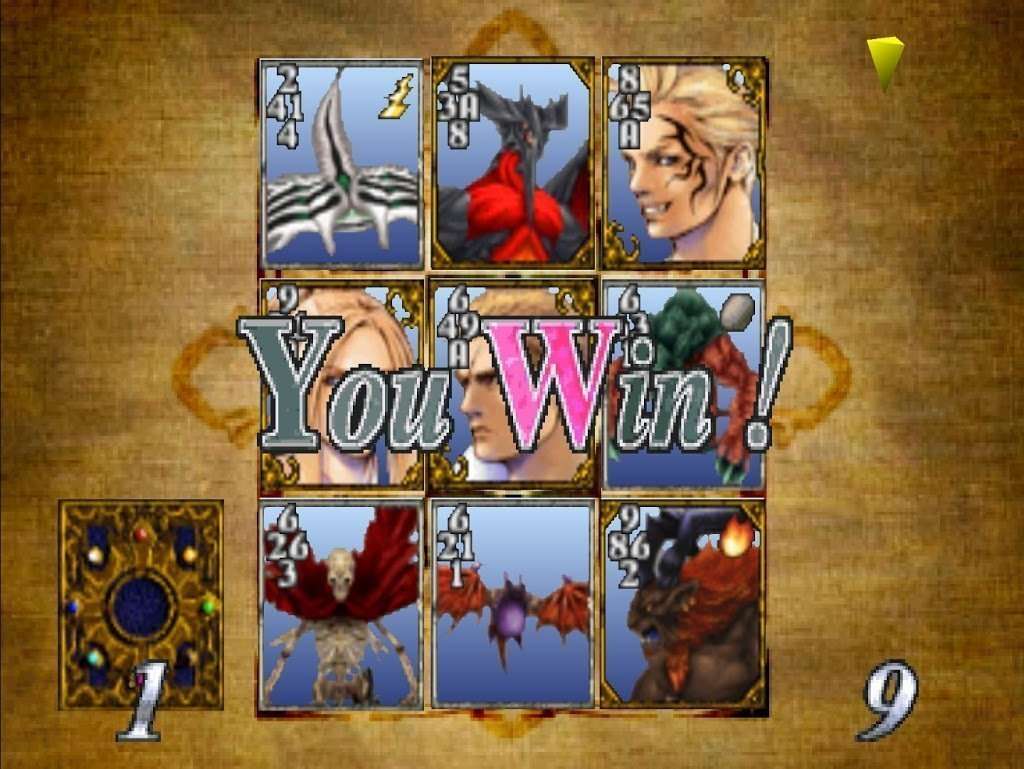 Difficulty: Hard –  In my opinion, Final Fantasy VIII is the hardest game in the series so far (from 1-7). Even completing the main scenario requires a bit of planning and near mastery of the game’s complex rules. As usual, this title contains side quests and optional content that is even harder or more time consuming to complete, but the rewards for doing them are great indeed. Like many other games in the series, FFVIII does feature an optional mega-boss. I didn’t beat him the first time I played, but I did manage to conquer it this time around. It was quite an accomplishment.

Story: This game features a very detailed storyline. On par with anything in the series thus far. There’s also a very romantic theme between two of the lead characters that’s on par with any of the popular girly movies of the modern day. At the beginning, certain elements of the plot are confusing and bit fuzzy, but by the end of the game you can see just how artfully everything has managed to fit together.

Originality: If the goal was to make a new Final Fantasy that was unlike anything seen before, the developers accomplished their mission with flying colors. FFVIII is a very unique beast. The GF and junction system mentioned in the review above are unlike anything they’ve sprung on us yet. While I praise the originality here, sadly this is also the reason the game is shunned by many die hard fans. In a way I can understand the complaints. But then again, everyone always says they want something new and different. Yet, once it is given to them, they are quick to complain.

Soundtrack: I daresay, this might be the best so far overall in the series. It’s very difficult to make that claim when there are some truly classic tunes from FFVII alone. But in terms of dynamics and composition, the music presented here is truly a work of art.

Fun: I personally enjoy this game very much. Perhaps for me, I am bit influenced by nostalgia. I don’t know. Playing this game is much like curling up with a favorite winter blanket. It’s emotional and familiar. I do feel that some parts of the game are bit annoying and overly complicated, but overall everything works well. I like it the way it is.

Graphics: This game marks another step up in quality for Final Fantasy. Each game seems to making a pace towards photo-realism. And while we still have a way to go, we are another step in the right direction. The FMV scenes were amazing for the time, and even though the main game itself is littered with pixels galore, it is still pretty easy on the eyes.

Playcontrol: This is a big issue for me with this game. Moving the characters around seemed to be very stiff and unintuitive. Often times, it is difficult to understand where on the pre-rendered background you are supposed to go. Also, later in the game when you are able to control sea-faring vessels and flying ships, the control scheme used to navigate them are odd and difficult to grasp.

Value:  There’s a lot of game packed into these four discs. During this playthrough I made sure to take the time to complete every side quest in the game: chocobos, optional Guardian Forces, secret bosses, you name it. When I completed the game I had just over sixty hours of playtime. Even at full new price, I feel that the game is well worth a purchase. Today, the game is available for around $10 digitally. You can’t beat that.

Overall score (1-100): 80 – I’m a fan of this game, but it is certainly not the perfect example of what Final Fantasy represents. All of the classic elements are here in one way or another, but the game is quite a deviation from other titles in the series. In its own right, Final Fantasy VIII is an amazing game, but does seem to burdened a bit by its own complexity and does feel a bit out of place. Regardless, I do recommend the game to anyone who is a fan of JPRGs and it’s a must play for any major fan of the series.