With the NDA finally being lifted, I’m now able to share my thoughts on Square Enix’s upcoming online multiplayer game, Triad Wars. Set in the same universe as their 2012 hit, Sleeping Dogs – Triad Wars had my attention from the day it was announced. Being a huge fan of Sleeping Dogs, I was sure to apply for the beta the first day SE started accepting registrations. Luckily, I was accepted and now I’m finally able to share my thoughts.

First, let’s talk about what Triad Wars is. This game is a free to play social/multiplayer title set in Sleeping Dogs world. The game takes place after the events of Sleeping Dogs, right in good old Hong Hong. Players of Sleeping Dogs will feel right at home. The overall workings and play style is pretty much identical to SD. Your character can walk/drive the streets of Hong Kong, start fights, engage in general criminal activity, etc. It’s once again, pretty much an open world. What makes this game different from SD is the fact that it is a multiplayer game. In Triad Wars, you design a character, known in game as an Enforcer, who is destined to become a crime boss in a Chinese Triad (gang). The goal is to build your crime syndicate by establishing various rackets, raiding other rival triads, shaking down citizens, etc. The character creation is currently pretty lacking. Only male Enforcers can be made at this time, and there’s very little customization from the start. 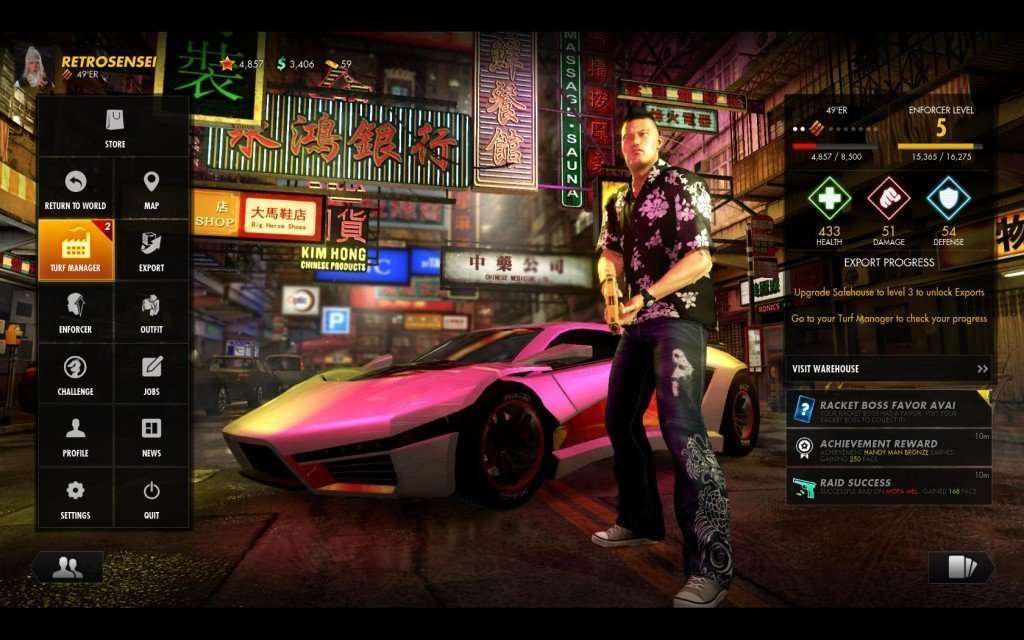 When the game starts, you go through a brief tutorial that explains how all this works. The tutorial is very bare bones and extremely brief,  then you are thrust right in to the meat of the game. To be honest, I was quite confused when first starting out. Essentially, by the end of the tutorial you are awarded with some very basic “Turf”. The goal here is to expand your turf by raising money and starting/improving various crime rackets. For example; drug manufacturing, knock-off electronics, things like that.

To earn enough money to get these things off the ground, you can engage in various activities. Some of these I’ve mentioned above, but the most profitable and currently what seems to be the core of the game is raiding other players. You see, while this is a multiplayer title, you don’t actually play the game with others in real time. You’ll never see another player live in the game, but your in game map will be populated with the locations of their turf, which you can raid. Other players at or around your level are pulled from some database and thrown into your map. Once you’ve raided a particular area on the map, there’s a cooldown timer before that area is repopulated with another player’s turf. 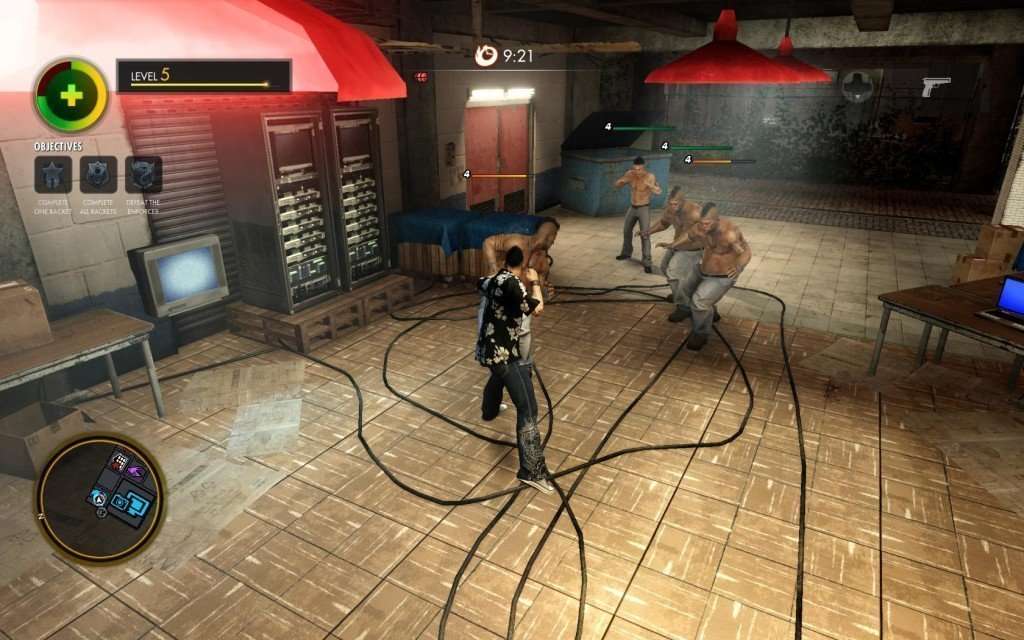 When you raid another player’s turf, you essentially have to fight your way through their HQ and defeat a CPU controlled version of that other player in combat. To make your raid more profitable, you can also hit their various rackets during the raid. Each racket is guarded by a certain number of thugs. Defeat all the thugs in the area, and you have cleared that particular racket. Combat itself is relatively easy, but what makes this difficult is you only have a certain amount of time to complete the entire raid or you fail. So if you get pinned down, it’s easy to run out the clock.

Ahhh but of course, there’s a solution to that. There’s a little something in Triad Wars called “Favors”. These are consumable boons that grant your Enforcer a number various perks. There’s favors that add time to your raid clock, increase the speed in which you recover life, there’s even favors that give your character weapons they can use during a raid to make defeating enemies easier. 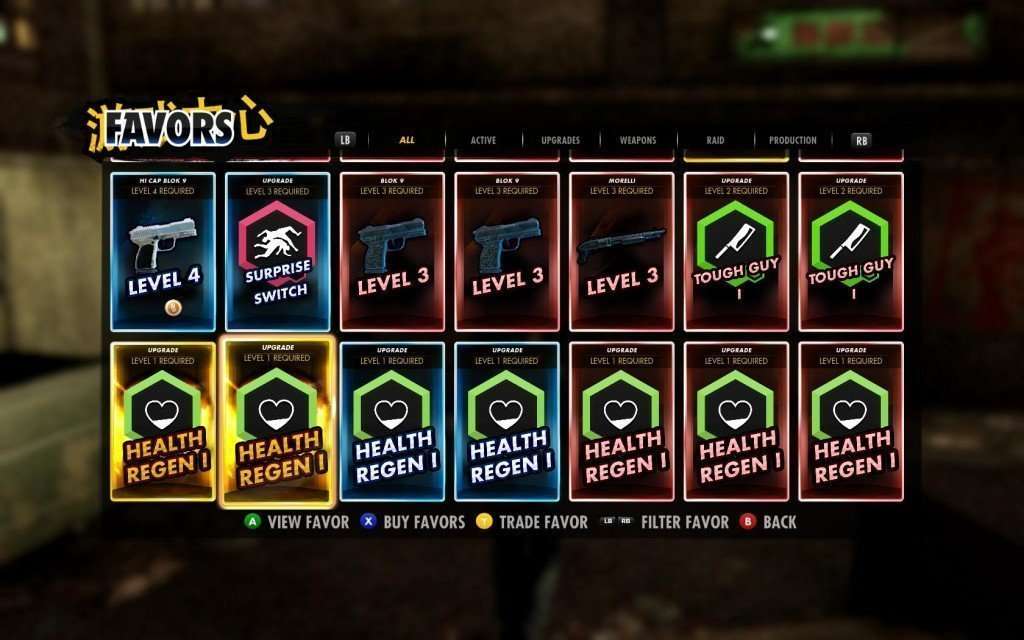 Favors can be found or awarded in the game, but they are sparse and after a while tend to be pretty useless. The best favors are available for real money in the Triad Wars store. Yes… here we have it. The beginning of the slippery slope known as “Pay to Win”. The Triad Wars store works like many Cash Shop style games these days. You purchase things from the shop using a virtual currency. In this case, Gold Bars. When you start the game as a beta tester, you are granted a certain number of gold bars to start with, but if you want more you need to break out that wallet – and they are not cheap. Items in the store range from blind, grab-bag style favor packs to vehicles and character customization. Maybe that is why character creation seemed so limited? If you want that fancy handlebar mustache, you’re gonna pay for it! 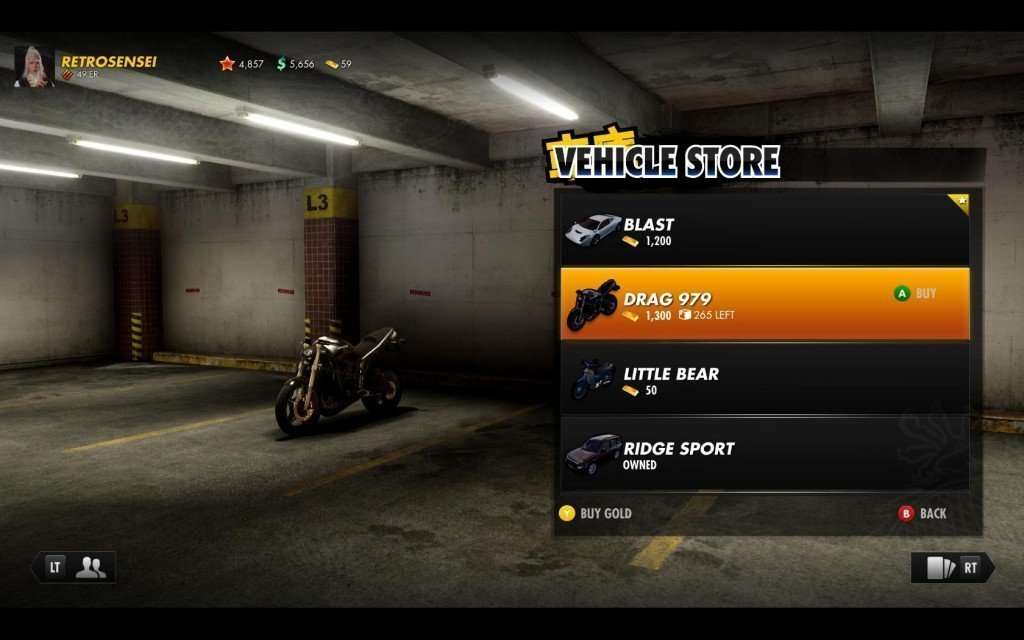 Not only that, but Square Enix has really played up this whole cash shop angle by having some limited edition items. For example, the motorbike in the screenshot above shows that only 265 bikes are left in stock. Once they’re gone they’re gone. This automatically ensures that a certain percentage of players will feel compelled to whip out their wallets to buy an item that they don’t really need, just because its limited.

In this game, more than any other, buying a vehicle really has no foreseeable advantage. Number one, you are given a vehicle from the start. Plus, you can go up to any car on the street and jack it – for free. To be honest, I’m not really feeling the love from this shop. It feels greasy and the cash grab from SE here is obvious and unapologetic. But then again, the game is “free” – so it is what it is.

Aside from the shop, my biggest complaint here is the fact that there’s really no motivating reason to play this game. At least for me. There’s no real story to hook you. The only goal in the game right now is to level up and be a bigger badass than the other people playing the game. And let’s face it, most of us will NEVER be the biggest badass in a game like this. There’s always that handful of mysterious players at the top of the list that have everything maxed out from day one and never get overthrown. Maybe they’re millionaires who spend thousands of dollars in the in-game store, or maybe they’re fake bots controlled by SE to give us all a goal to shoot for. Who knows. For me, I find more fun in the sadistic act of mowing down pedestrians and running from the Hong Kong PD than I do in actually worrying about my global ranking on the leaderboard. Honestly, the main reason I currently have for logging in is to drive around a virtual Hong Kong and listen to radio. 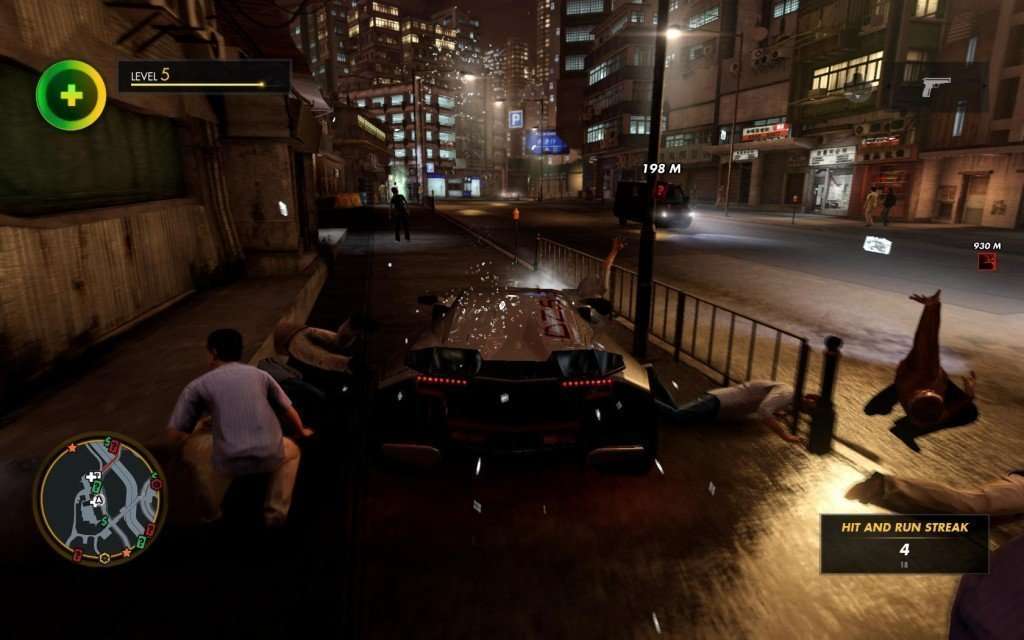 In a nutshell, I’m not really sure how well this game is going to work out once it is released. There’s not much to do so far in the game itself, and there’s really no real reward for doing what little there is to do in the first place. SE has a long way to go if they expect people to spend real money here. At this point, Triad Wars feels like a real pretty looking, 3D Facebook game that reminds you all the time how much easier it would be if only you’d slap down that credit card.

Granted, the game is still in a closed-beta test. So we have quite a ways to go before this thing goes public. But at this point, I’m sadly disappointed in what I’m seeing. A game based off Sleeping Dogs deserves better.

Hey, at least I got my sweet ass sports car that has “Closed Beta Tester” painted on the side. They’ll never be able to take that away from me. 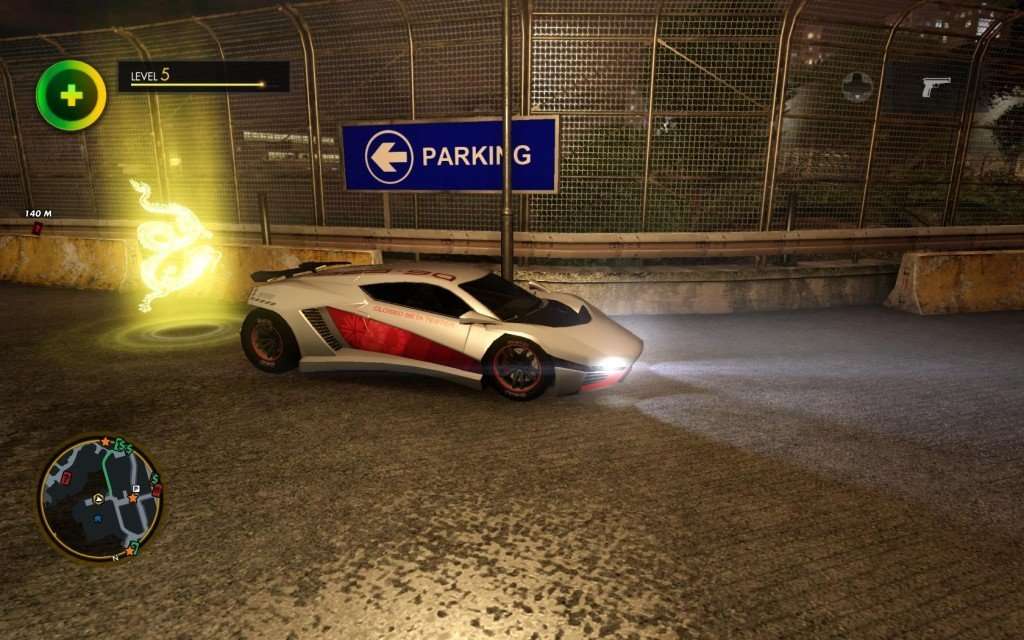