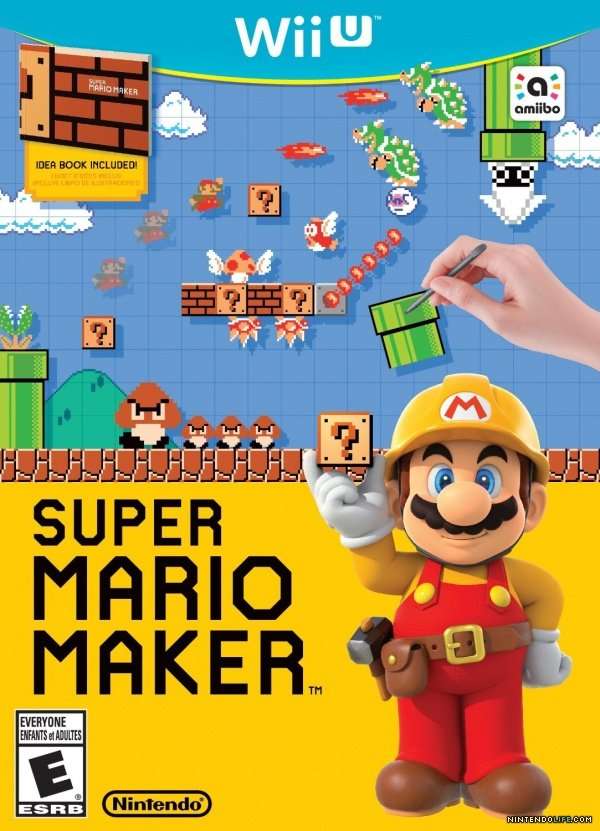 I know that the site has been focused on other things lately, but I wanted to take a step to the side for a moment to provide my review of Nintendo’s latest sandbox craze; Super Mario Maker. So what is this title? Is it a toolkit, a game, or both? The answer: both – and it is glorious. If you listened to the RetroSensei Podcast before the hiatus started, you’ll know how excited I was for this title. I’m happy to say I have not been disappointed. Super Mario Maker is really a fresh and exciting release from Nintendo, and one I hope that opens the door for other “designer-type” games in the future.

To start with, the way the game is handled is quite clever. Upon first loading the disc, you are brought to tutorial of sorts. Essentially, you are plopped in front of the famous World 1-1 from the original Super Mario Bros and told to play the game as you normally would. However, after a few moments you reach a part of the level that hasn’t been finished. The game then guides you through the process of completing the level so that it can be conquered. 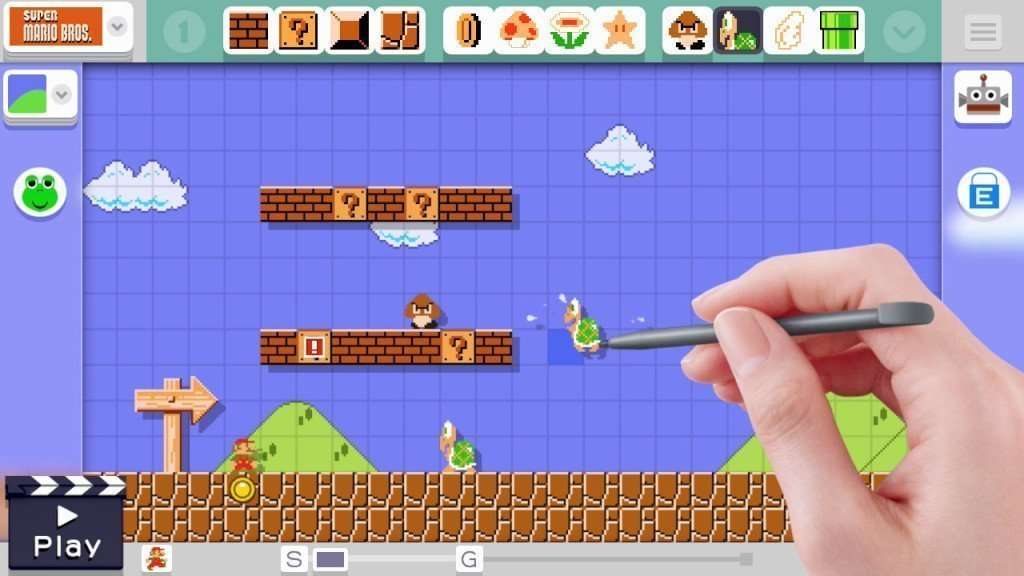 When first starting out, you only have access to a limited amount of objects/assets, but as you continue to build and use the tools provided to you, you will eventually receive “deliveries” that essentially unlock more and more things to play with. The more you build, the faster you’ll unlock things. But no matter what, you’ll have everything unlocked after seven-consecutive days of playing.

Once you have designed a level, you can save it or even upload to Nintendo’s servers so that other players can give it a go. However, in order to share the level, you first have to demonstrate the ability to complete it yourself. This serves as sort of a check-point to let other players know that any-given level is indeed winnable. Using Nintendo’s Miiverse service, you are able to “like” and comment on certain levels. This really provides a community feel to the game that is absent from many games available on Nintendo’s various platforms.

When it comes to player-created content, some of the levels that are out there are absolutely mind-blowing. The possibilities that exist here are really nearly limitless. This has led to some pretty ingenious content. But as expected, there’s also a fair share of silly and pointless content out there as well. 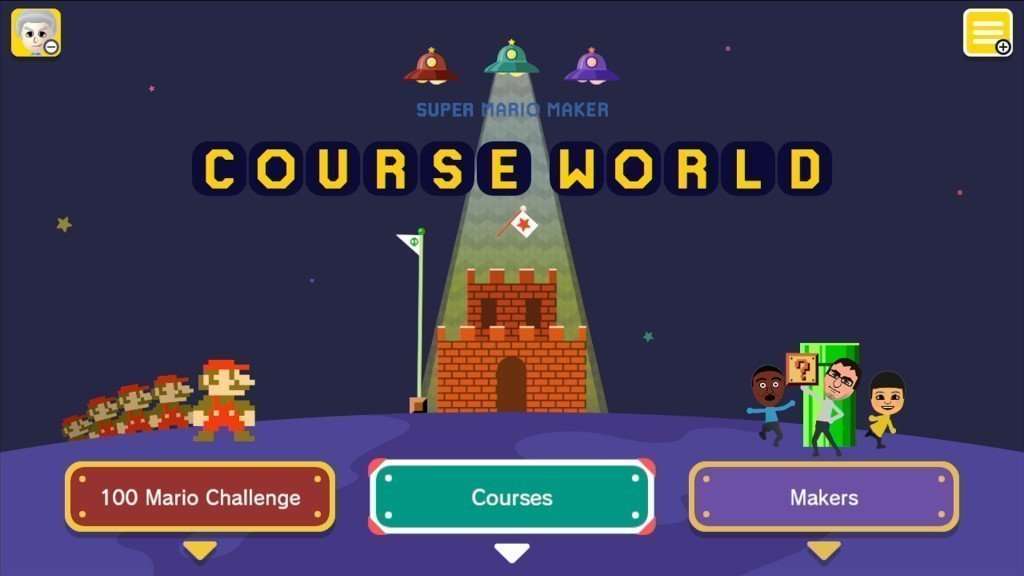 When enjoying player-created content, there’s a number of ways to do it. If you have a friend who designs, or if you know the “code word” to a specific level, you can plug it in and play that way. Alternately, there are also lists of ranked levels that you can browse. But if you want to randomize things a bit, you can always take the 10-Mario or 100-Mario challenge. These “challenge” options gives you a bank of lives, either ten or one-hundred, and put you in front of random player-created levels. Successfully completing the challenge rewards you with special power-up that you cannot unlock through other means.

That brings me to another topic. Super Mario Maker does include Amiibo support. Amiibos are something I’ve actually not talked much about on this blog yet. Amiibos are small plastic little figurines embedded with a NFC chip. These figures can be scanned into certain games to unlock special content. In many games, these unlocks are often trivial. But Super Mario Maker has really done a nice job with Amiibo integration. When scanning an Amiibo, you unlock a special costume-based power-up that can be inserted into the level you are designing. For example, scanning a Link or Princess Zelda Amiibo will allow you to load a special mushroom that, when activated, will turn the player into either Link or Zelda. This has no advantages outside of being simply cosmetic, but it can end up being really quite fun and entertaining.

All in all, when it comes to this game – you’ll get out of it what you put in. My whole family has enjoyed this title. It’s a common occurrence in my household to try to make the trickiest, most punishing levels possible. Then sit and watch as the others try to plow their way through.  My youngest son is a HUGE fan of tossing Bullet Bills on top of bouncy Note Blocks and giggling with delight as his mother tries to navigate the endless sea of heat-seeking bullets. 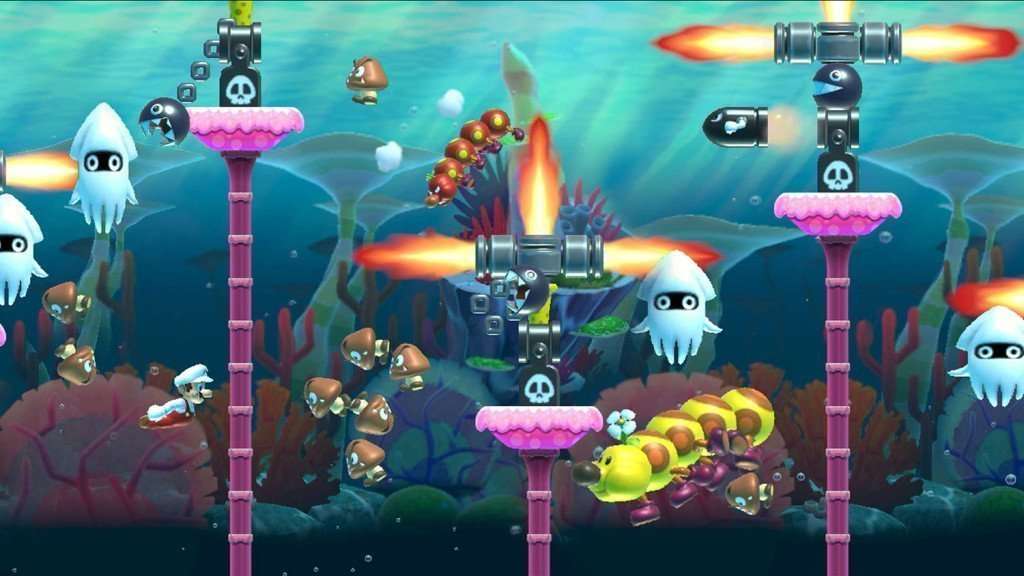 Difficulty: Variable–  Mastering the actual process of designing a level in Super Mario Maker is simple. If you can hold a stylus and point, you can build levels in Super Mario Maker. Building a GOOD level, well that’s entirely up to your own artistic vision and abilities. When playing player-created content you’ll often come across many cake-walk levels or short, playful proof-of-concept style stages. But, beware. There are PLENTY if torturous and downright difficult levels out there as well. Luckily, Nintendo does give you the option to skip certain levels altogether if they are too difficult.

Story: There really no story here aside from the standard “rescue the princess” trope. But really, Super Mario Maker is a sandbox, not an actual story-driven game.

Originality: Sandbox style games are not new. But typically, these user-created style games are restricted to the PC platform. Nintendo has finally found a way to give a complete toolkit to fans in a way that has never been seen before on home consoles. This is mostly possible due to the design on Wii U touchpad itself. It is my hope that we soon see other similar games from both Nintendo and other developers. Who wouldn’t want a “Zelda Dungeon Maker”??

Soundtrack: The soundtrack for Mario Maker contains familiar Mario tunes. But the game itself is filled with cute little touches that actually made me smile. When designing a level, the background music is subtle. But, placing a brick or object treats you to a little “pop” noise that is actually harmonized with the background music. This is a really neat little effect that’s difficult to explain in writing. But it’s another example of the type of thoughtfulness and quality that fans have come to expect from Nintendo.

Fun: I can say without a doubt that this game is one of the best purchases I’ve made for the Wii U. Perhaps even one of the best games I’ve encountered all year. It is truly fun for the whole family.

Graphics: The graphics vary here, but do so by design. You can create levels in an 8-bit Nintendo style or take advantage of the Wii U’s modern graphics and build a Super Mario Wii U level that is as gorgeous as anything else from the current generation.


Playcontrol: Building content with the Stylus and Wii U pad is a cinch. It feels natural and is easy to master. When playing through your levels, you can use optional game pads if you choose, but to be honest the Wii U gamepad also serves just fine for this purpose. I had no play control issues at all.

Mature Content: None. However, with any user-created content there is always the possibility that another player may create something questionable. But Nintendo does a pretty good job of policing this.


Value:  $60 is a lot of money for a game. But, these days that seems to be the standard for a current generation release. Regardless, considering the endless sea of content available online, this game, even at full price is well worth the money. I have no regrets whatsoever for spending my $60 on this title.

Overall score (1-100): 90– This game represents the best of what makes Nintendo great. It is a bold step for any developer to release a title like this. Not only did Nintendo do that, but they succeeded. There are hours and hours of fun to be found here already. Not to mention the future patches that Nintendo has promised that will only add more options in the future.