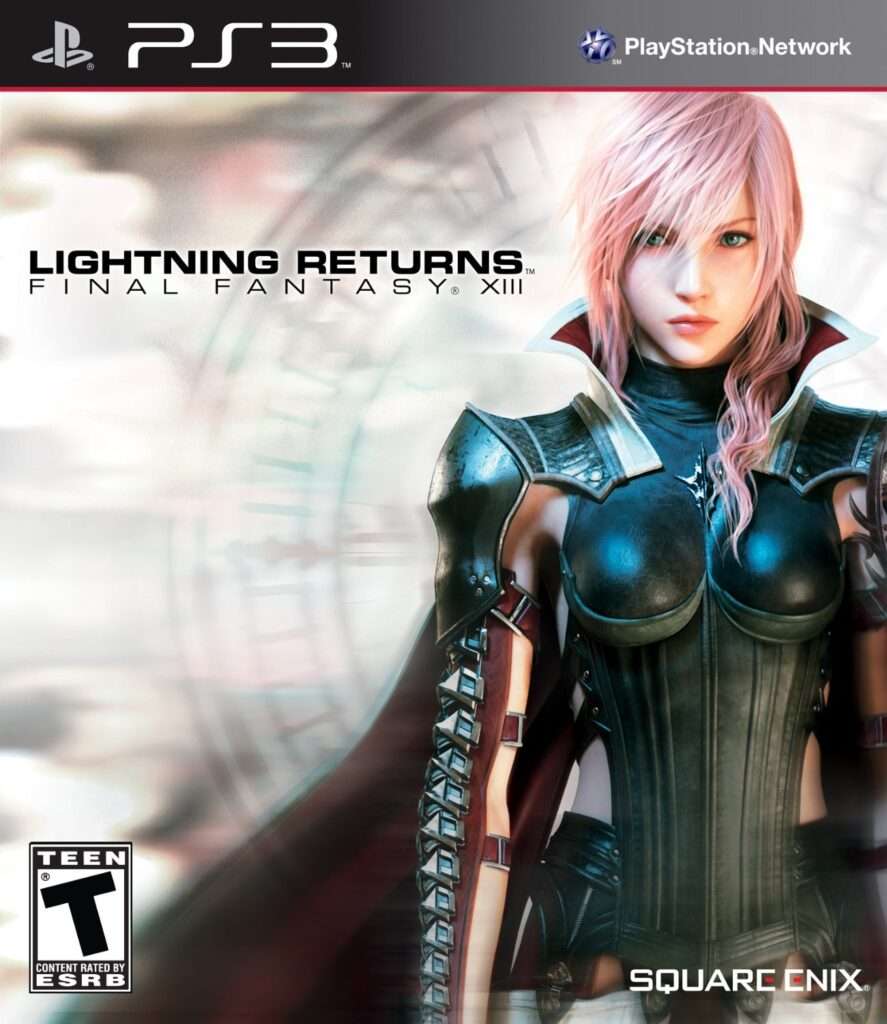 A blizzard is the perfect time to catch up on some backlogged gaming. This year, during the big snow-in, that’s exactly what I did. I managed to finish my playthrough of Final Fantasy XIII – Lightning Returns. The third and final chapter in the Final Fantasy XIII trilogy.

I purchased this game when it was released, but this was my first time sitting down to play. I wasn’t sure quite what to expect with this title, I had heard it was very different than the first two XIII games, and indeed it was. Admittedly, I was quite confused for probably the first four or five hours of playtime. I couldn’t quite figure out the mechanics and flow of the game. It felt very foreign to me. Eventually, it did all begin to fall into place. But before I dive into all that, let’s first take a look at the storyline.

This game takes place five hundred years after Final Fantasy XIII-2. During that time, the people of the world of Gran Pulse have been gifted with near immortality. However, the world itself has been consumed by mysterious dark force and mostly destroyed. At the time in which this game takes place, only a few small patches of land are habitable. This world has been rebranded as “Nova Chrysalia” by it’s inhabitants. As chaos continues to consume what remains of the world, the end of time is mere days away. Those who played the previous game, will be aware of the fate of both Lightning and her sister Serah. Spoiler Alert: For those who may not have played it, at the end of Final Fantasy XIII-2, Lightning is transformed into crystal, assumingly for all eternity. But now, something has changed. A new god known as Bhunivelze has decided to craft a new world. His desire is to populate it with human souls. To do so, he will need someone to reap the souls of the living. To accomplish this task, Lightning is brought back from her crystal stasis, with the promise of having her sister resurrected if she will assume the role of “Savior”.

Only thirteen days remain before the end of the world, and Lightning must do her best to help ease the suffering of the people of Nova Chrysalia before the end of the final day if she wishes to be reunited with her sister again. This mostly consists of undertaking various quests and solving problems for those in need. But of course, during the course of the story, Lightning is sure to encounter some familiar faces. 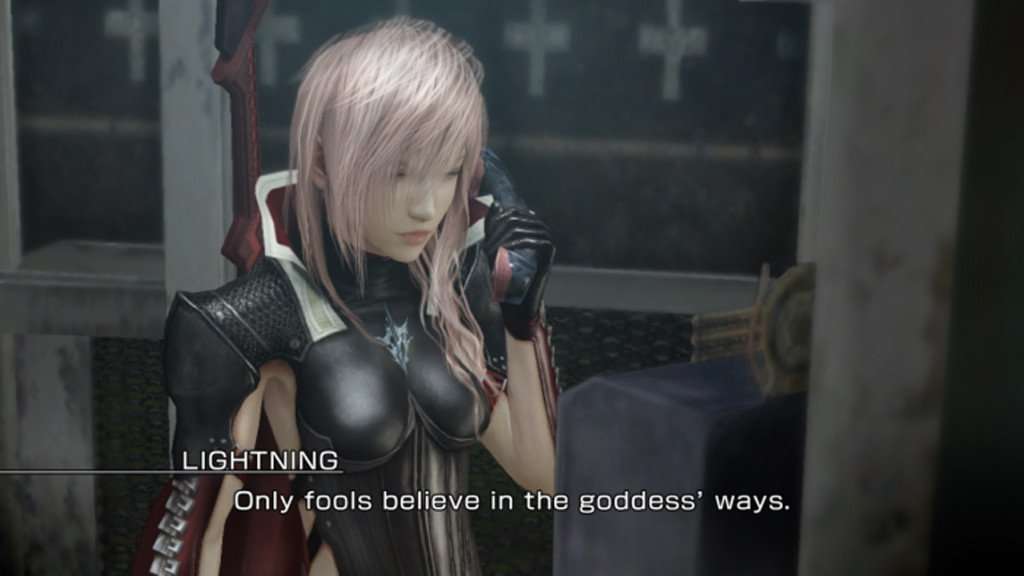 As mentioned above, the main objective of the game must be accomplished in thirteen “game days”. This means, that a large part of this title involves trying to get as much done before the clock runs out. When I first started playing, this was very unnerving to me. It became apparent pretty quickly that some content in the game is time-sensitive. Certain objectives only occur at certain times, so it’s a constant race against the clock. I dislike this mechanic in games very much and I was worried that I would end up missing some critical content as a result. But, after spending a lot of time with Lightning Returns, I’m happy to say this is not really as big of an issue as it first seems. In reality, there’s more than enough time to accomplish everything in the game that needs to be done. In fact, if you manage to complete enough sidequests, you can even extend this deadline by one full day.

While the timer is certainly one of the biggest changes to the game mechanics, that’s not the only thing. The combat system in this game is radically different from anything seen in Final Fantasy yet. Gone is the paradigm system that has so far been a staple of XIII, now we have something called the Schemata system (or as it is official known, the Style-Change Battle System). It’s best described as a mix of the XIII Paradigms and the Dressphere system from FFX-2. Essentially, Lightning can set up three different active roles to switch between during combat. These roles are customized based on her weapon, clothing, accessories and skills. The Garbs (or outfits) are the core to this system. New Garbs can be obtained through NPC merchants, quest rewards, and DLC.  The combat itself is very action based. Each role has it’s own Stamina Meter that is depleted as Lightning executes actions. This meter recharges as actions go unused. The key to mastering this system is to create a balanced set of Schemata and learn how to make the most appropriate use of them depending on the enemy you are encountering. I found the whole thing to be a bit confusing at first, but after a while, it started to click.

As I mentioned above, some outfits are available via DLC. Yes, this game does feature downloadable content, but unlike Final Fantasy XIII-2, it’s all optional items. The entire game story is included with the purchase of the game itself, so you don’t have to spend any extra money to experience the entire game. The garb that is available in the store is largely cosmetic, but there are a few useful pieces. Personally, unless you really want to play dress-up, I see no reason to spend your money. The Garb that is available in game is more than enough to accomplish everything you’ll ever need. That being said, there are a few free pieces you can acquire if you happen to have XIII, XIII-2 and FFX-HD saves on your PS3. (This might be true for Xbox users as well, I cannot personally confirm). 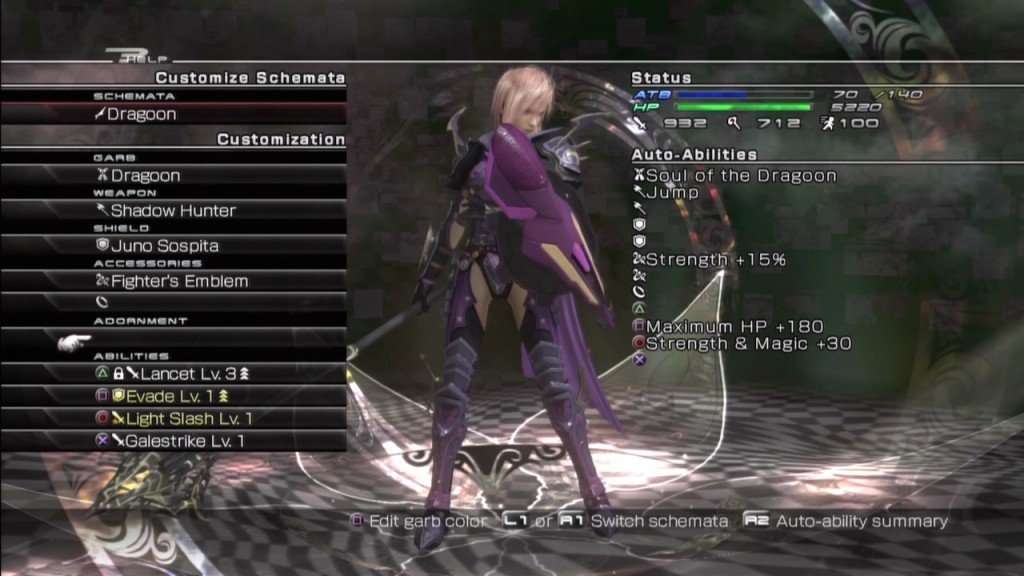 Aside from DLC, the game also features a rather novel Online function called the Outerworld Service. This service, if enabled, will occasionally place avatars for other players in your gameworld. When talking to them, you can view a gameplay screenshot that they’ve shared, and sometimes even purchase items and weapons that they’ve decided to sell. At one time, Outerworld would also connect to both Facebook and Twitter, but SE pulled the plug on this option last year. Also worthy of mentioning, enabling Outerworld Services also rewards you with free DLC that was previously only available to those who played the Lightning Returns demo.

As I mentioned earlier, this game is very different from others in the series, and as a result can be a bit confusing at first. But if you go in without any expectations and keep an open mind, everything soon falls into place. It wasn’t long before I found myself drawn into the game itself and having quite a good time with it. Lightning Returns is certainly it’s own game, and it’s not a bad game at all. But to me, it didn’t really feel like Final Fantasy. Yes, there’s moogles, chocobos, and a number of other classic FF throwbacks, but it just doesn’t feel like Final Fantasy to me.

No matter what changes may exist here, this game does stay true to one constant in the Final Fantasy universe: there’s plenty of optional content. As always, I made it my goal to unlock and defeat every optional boss the game had to offer. (One of which, can only be done ensuring you have access to the missing 14th game day). The trophies I earned for defeating these battles were well deserved if you ask me. 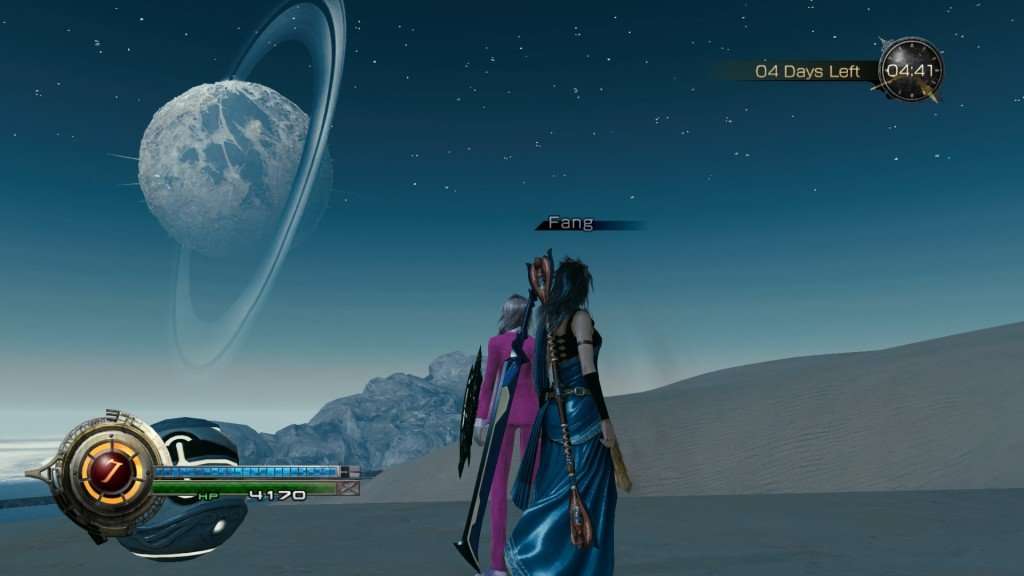 Difficulty: Variable –  This title comes with a Normal and Easy mode option out of the box. Once you have completed the game, Hard mode will be unlocked. Based on my experience, Normal mode is not really that much more difficult honestly. So this choice is really up to the player. Regardless of which option you choose, the time limit will still apply and the game can still be challenging in spots.

Story: The story presented here is actually very rich and enthralling, if you can manage to make it far enough into the game for all the pieces to start to fit together. For me, at the beginning, it was a confusing mess. It’s unclear at first why so much time has elapsed, yet everyone from the last game is still alive and kicking. Not to mention the sudden new deity everyone is so worked up about. But, as I said, if you hang in there, it’s all answered in the end and once it’s all said and done, it really makes a wonderful capstone to the Final Fantasy XIII mythology.

Originality: While many of the gameplay ideas founds in Lightning Returns are not fully original, they are certainly new to the series itself and really make for a new experience. The outerworld services are a neat touch, but I feel like they could have been implemented better. Combat in this game is certainly different than what we’ve seen in the series thus far.

Soundtrack: The soundtrack here is a mixed bag. Some of the new musical pieces are very well done and hold their own with many of the other Final Fantasy classics. Others are a bit drab. A good bit of the background music is ambient type stuff that is appropriate for the game, but not very remember-able. Thrown into the mix with all of this, are reworkings of other XIII and FF songs.

Fun: I admit, at first, I was not impressed with the title and was not enjoying it very much. But I’m happy to say that this changed about a quarter of the way through. Once I hit that point, I had quite a good time with this game. Many of the side quests are quite a bit of fun.

Graphics: This game uses the same graphical engine as XIII and XIII-2 and looks just as good if not better than the previous two. It seems that by this point, SE has had plenty of time to really tweak their Crystal Tools engine. Again, the PS3 has a slight edge over the 360, but not by much.


Playcontrol: No real complaints here. The game controls work as expected. The camera controls are natural and precise, the button mappings are intuitive.

Downloadable Content: Downloadable outfits for use in the game. Some of these are nice to have, but offer no major tactical advantage. Somewhat overpriced. (PC users can snag most of this for free)


Value:  I purchased the game at full price when it was released. I feel that there’s enough content in the game to make it worth the amount that I paid. These days it’s often available for around $20.00. Certainly a great bargain at that price.

Overall score (1-100): 70 – Lightning Returns is good game, but it doesn’t rank with some of the other games in the series. Fans of XIII are the most likely to enjoy this one.