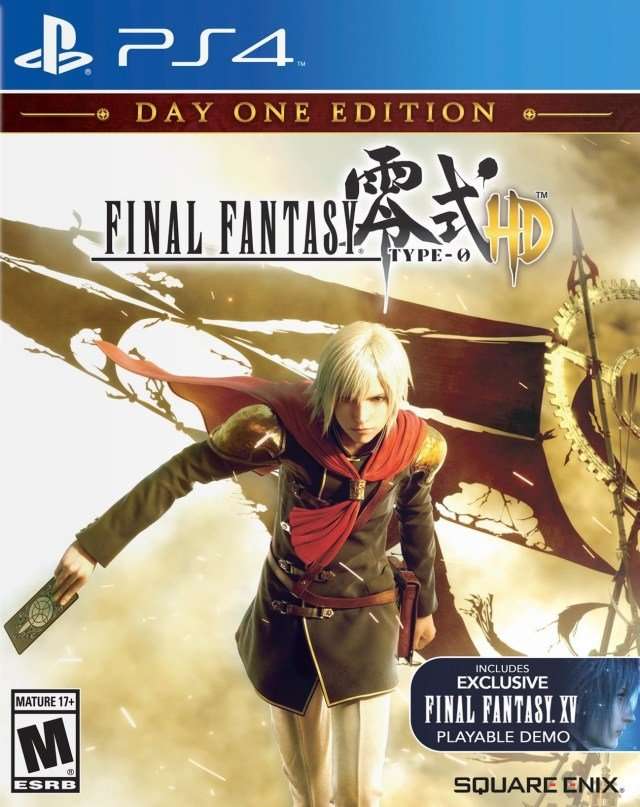 This post concludes the “Final Fantasy Initiative” project that I started in December of 2014. Since that time, I have played through and reviewed every title in the main Final Fantasy series. During the course of this project, I have even managed to check off a number of the side-games as well. Technically, Final Fantasy Type-0 is one of those. Meaning, it is not a numbered Final Fantasy game. However, considering it is a part of a Fabula Nova Chrystallis  subseries, I decided to include in my project as it ties in directly with XIII and the upcoming XV.

As time went on, the name Agito XIII was changed to Type-0 and Versus XIII was later re-branded as the upcoming Final Fantasy XV. As you probably know, the XIII game world became quite popular and XIII spawned two direct sequels. All this attention for XIII and XV, pushed Type-0 to be a sort of redheaded step child. For a while, it seemed like the US would miss out on this game. Luckily, that was not the case. Originally released in Japan for the PSP, Type-0 was finally brought to the west as an HD remake. This is the version that I will be reviewing. 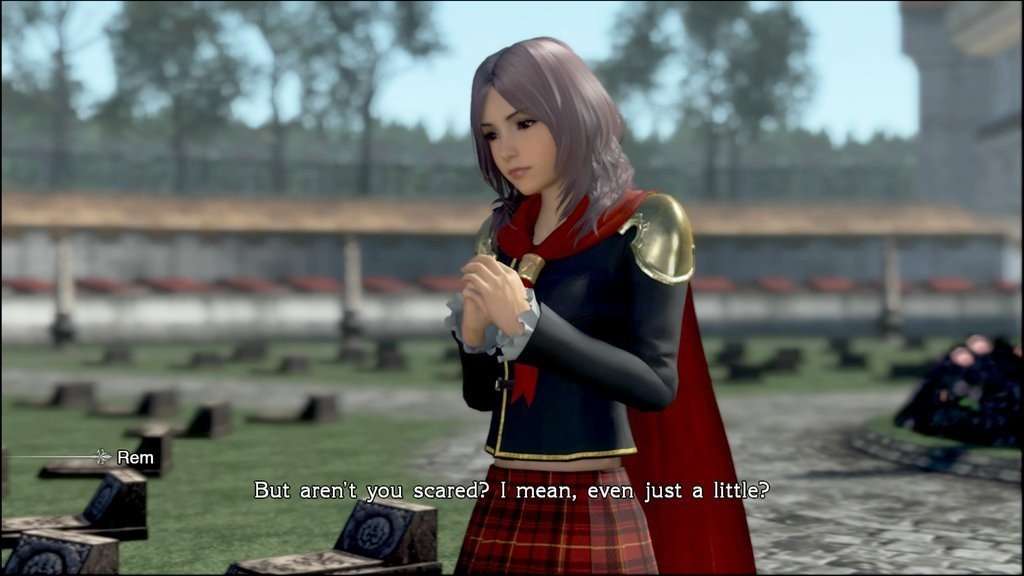 I purchased Type-0 HD on the day it was released (interestingly enough a year ago from the date this review was posted), but due to my backlog I didn’t get around to playing it until recently. I purposefully avoided reading much about the game itself because I tend to enjoy experiencing a game with fresh eyes. So, it’s safe to say I had no idea what to expect.

If I have to sum up my first impression of Type-0 in one word, I would pick: confusion. The game starts with two extremely long and very wordy cutscenes.  A lot of proper nouns are being tossed around in the opening scenes that make no sense to a first time player. These are presented in a way that makes you feel like you’re already supposed to be familiar with the place and things being referenced. When in truth, you have no idea what is going on. While visually stunning, these cutscenes didn’t do much to really get my head into the game itself. In fact, it wasn’t until I was about a quarter of the way through the game before I finally had a firm grasp on what this game was even about.

To sum it up, the basic premise of the game is this: Type-0 takes place in a world known as Orience. This world is divided in to four nation-states. Each nation is guided by and protects a sentient crystal. Each crystal represents a certain power  (Magic, Science, etc. These crystals can bestow an individual with special powers by making them a l’Cie – much like in FFXIII). At the start of this game, the industrial nation of Milites is engaged in a conquest to control the crystals of the other three nations. Their goal has brought them the nation of Rubrum, a dominion that specializes in Magic. Using a newly constructed magic-jamming device, Milites attempts to invade Rubrum. This is shown in the opening cutscene of the game. 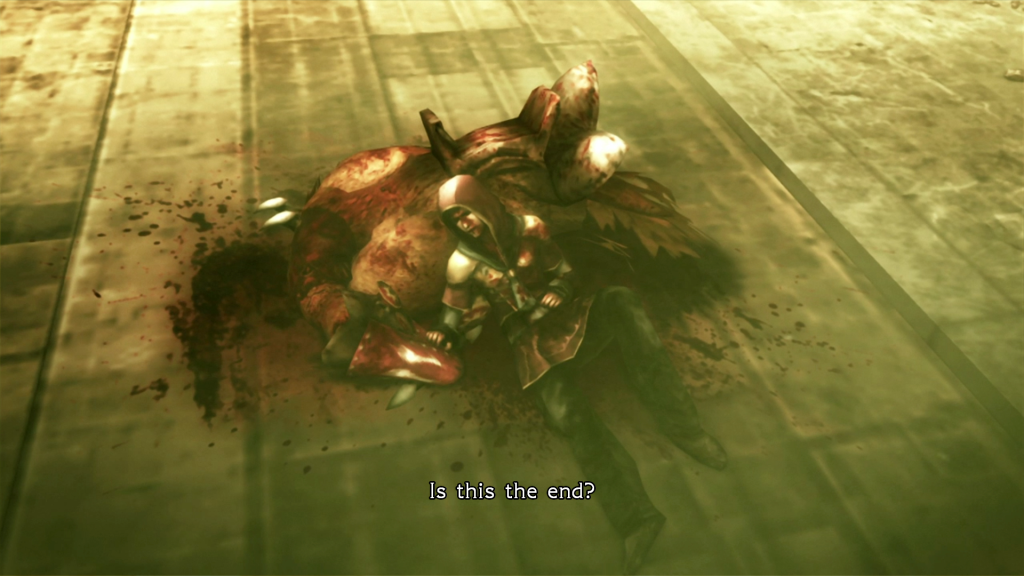 During the game itself, you play as any one of the cadets in Rubrum’s military academy. Specifically, you are a member of the mysterious “Class Zero”. A group of youths with rather mysterious origins. The game is divided into chapters, each chapter mostly focusing on a specific mission that Class Zero must complete. Most of these involve defending  the dominion from invasion, or overtaking enemy territory. During these missions, you can form parties from the class roster and switch between characters as needed. Each cadet specializes in a different form of combat, so a big part of the game learning which characters to use in which situations. As you play through the game, more details unfold that help to shed some light on rather obscure storyline.

In the downtime between operations, you are free to explore the school, participate in sidequests and optional tasks, attend classes (to increase stats). Every one of these things takes time and will deduct hours from the “freetime clock”. Eventually, it will be mission day – which means it’s off to your next assignment. One of the first things I noticed is that there are simply not enough hours in the game to complete all of the optional tasks available. That is because, Type-0 is actually designed with the expectation that you will play through it more than once. Upon beating the game, you have the ability to start over with your developed characters. (More on this later).

Back to missions for a moment, when engaged in a mission, you have the option to accept special goals. For example, you might receive optional orders that say “Take no damage for 3 minutes”. If you accept, you will receive a reward upon completion. If you fail, your main character dies and is unplayable until the end of the operation. I found this to be a very interesting concept, something I had never seen in a game before. Also, when embarking on an operation, you can also elect to accept support from computer controlled NPCs. Choosing to do so, can often make the mission easier, but you receive less of a reward. You see, everything that happens during an operation is graded. Upon successful completion, you will be presented with a scorecard – rating your overall performance. 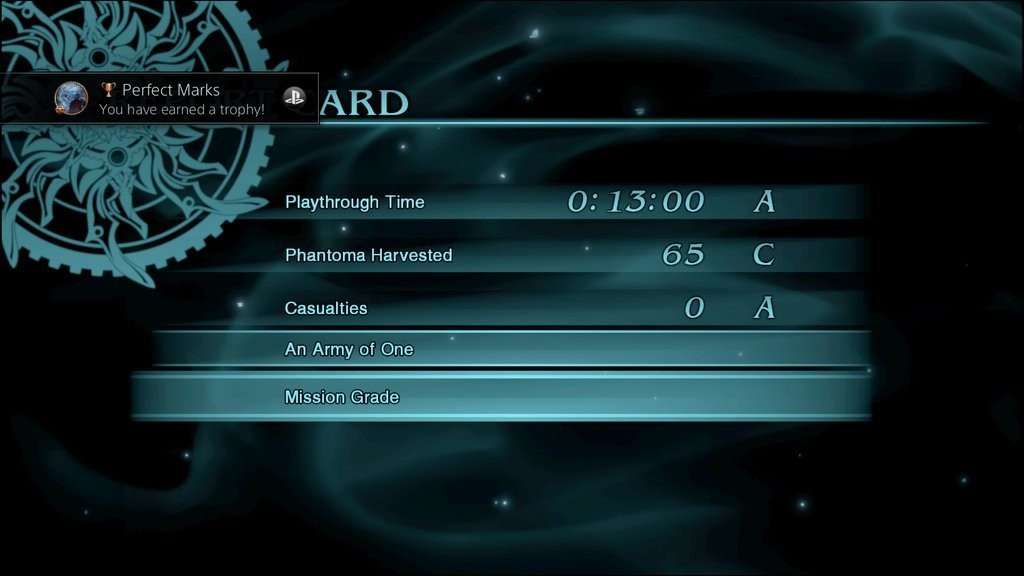 As you can probably already tell, Type-0 is a very different type of Final Fantasy game. Yes, almost all aspects of Final Fantasy are represented here in one way or another, but it’s very much an action-based RPG. The combat system is fast-paced, and a little hard to grasp at first. But once I got the hang of it, I found that I liked it quite a bit. Occasionally though, certain parts of the game will revert to an overhead (almost RTS style) view. During these phases of the game, you are often in charge of large-scale military operations: invading an occupied city, issuing orders to soldiers, etc. These are infrequent, but when they occur they seemed to me to be an odd change of pace in a game that is largely filled with fast-paced action.

Overall, I found Type-0 to be hard to get into initially. But, once I got my head in the game, I was hooked. In a lot of ways, it is obvious that this was once a handheld game. It’s structure and design reminded me a lot of Final Fantasy Crisis Core at times, but I think SE did a brilliant job moving the title to the console.

Finally, let me mention again that this is a title that is meant to played through more than once. Without spoiling anything, I will say that upon completing the game the first time, you may be left scratching your head at the ending. But if you pay close attention to the backstory throughout the course of the game, you will be able to understand exactly what’s happening. Completing the game a second time unlocks an optional ending.  Also, on your second trip through, you have the opportunity to make some interesting choices, that deviate from original playthrough. This helps make the second time through a lot more interesting and not too repetitive.

All in all, I have to say Type-0 is a solid, good game. But if you’re a traditional Final Fantasy fan, prepare to come out of your comfort zone just a bit. But don’t worry too much. There’s plenty of moogles, chocobos and an INSANELY difficult optional boss. I’m proud to say I did not shy away from this challenge, but I admit it took me until my second playthrough before I was able to step up to the plate on this one. So, yes. It’s Final Fantasy, but presented with a much different flair. 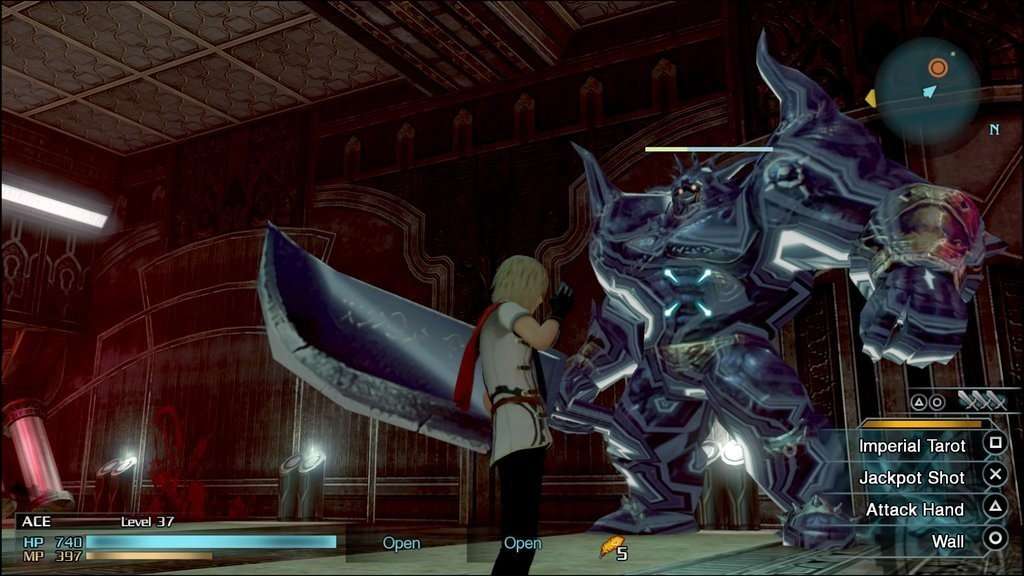 Difficulty: Variable –  There are multiple difficulty settings to choose from. Upon the first completion of the game, a “hardcore” mode is also unlocked. I found the difficulty options to be pretty appropriate. Choosing a difficulty setting does not affect the game’s storyline in any way.

Story: Very confusing at first, but fleshes out after a while. Type-o actually has a very deep and complex story. One that I found to be quite intriguing. The whole game is actually presented almost like a record of events. Very compelling stuff.

Originality: A lot of what’s seen in Type-0 has been done before in one way or another. But what makes this game very unique is the way all of these ideas are mixed together and presented. There’s a lot of different stuff going on here, but SE really managed to make Type-0 seem like something fresh and new.

Soundtrack: The soundtrack for this title is absolutely outstanding. Everything from the composition to the audio quality is mind blowing. Many FF favorites are included here in one way or another, but there’s tons of new original songs as well. All of them are simply amazing.

Fun: I have to say, when I first started this game I had no idea what was going on and as a result, I just wasn’t into it. For a while I honestly had little motivation to play. But after giving the game a little time, it REALLY started to grow on me. By the time I had completed it, I was actually eager to start it over for a second playthrough.

Graphics: Despite being an HD port of a portable title, Type-0 HD looks wonderful. SE did a fine job with this remake. The overworld portions of the game are a little iffy… but most of the game is in third-person 3D and looks stunning.


Playcontrol: Overall, no issues. Combat takes a little getting used to, but once you get the hang of it, all is well. Occasionally ran into issues with the game camera not focusing on what I needed to see during fights, but this most often occurred when I was up against a wall or backed into a corner.

Downloadable Content: No – The original JP version of the game had some DLC-ish costume unlockables, but these are all integrated into the main game now.

Mature Content: War time violence, graphic bloody imagery. A very sexy cutscenes.  As far as I know, this is the only FF game with a mature rating.


Value:  Originally released a premium price, the game is now often available for around $20 new. At this price, it is well worth the purchase, in my opinion.

Overall score (1-100): 75 – This game does have some flaws that prevent it from getting a perfect score, but at the same time there’s a lot of great gameplay here. Many fans of the series may be turned off at first, but if you can manage to stick with, Type-0 can really be a rewarding experience.