Today, I take a break from classic Playstation titles to spend a moment with a classic Nintendo 64 game. Of course, I’m talking about the legendary Super Mario 64. This game is almost universally lauded as one of the greatest Nintendo games of all time. Mario 64 was originally released back in 1996, but it would be ten years later until I had a chance to sit down with it. My first experience with the game was on the Wii virtual console. Shortly after that, I did snag a copy of the Super Mario 64 DS remake. But for this playthrough, I decided to give the Wii U Virtual Console version a try. I chose this version for three reasons: First, the DS remake suffers from some major playcontrol issues. Second, the DS version also includes some pretty major changes to the overall gameplay. While many of these are very well done, it radically changes the game and I really wanted to get a feel for the original release. Finally, I chose the Wii U version because I wanted to play using the Wii U Pro Controller.

You see, since my introduction to Super Mario 64 back in 2006, I’ve had major struggles with the controls of the game. When voicing my complaints to others, I’ve been told that the original N64 controller really provides the best experience. So, at one point I tracked down a second-hand N64 and gave this game a shot on it’s native hardware. But even then, I was unimpressed. Who knows, maybe the controller I was using was old and problematic, but I’ve traditionally found controlling this game to be frustrating. One look at the Wii Classic Gamepad and I knew that wouldn’t work well either. So I decided to go with my favorite Nintendo controller of all time, the Wii U Pro. 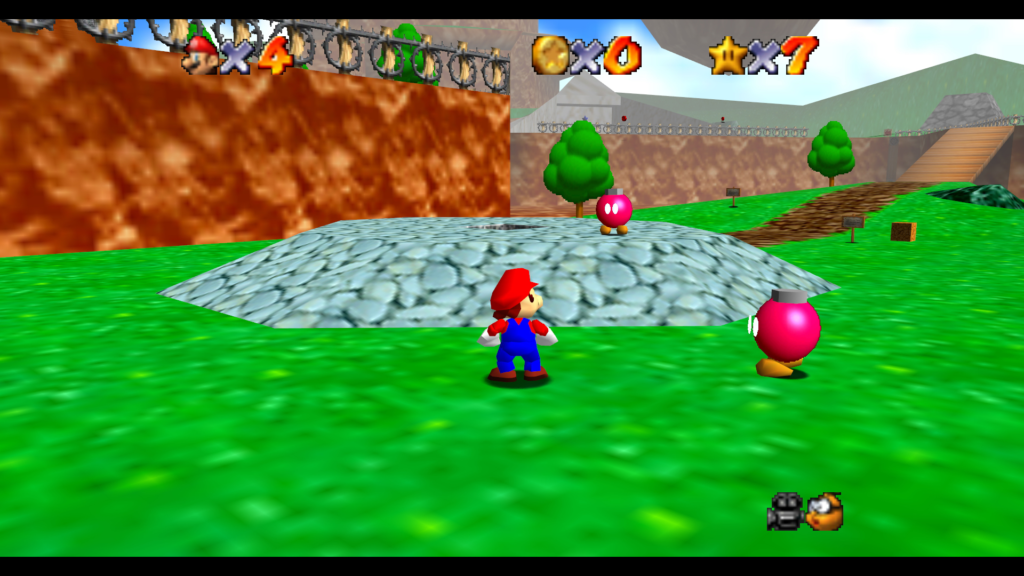 Super Mario 64 was a revolutionary title in many ways. To start, it was the first full 3D Mario game. As a result, for many non-PC gamers, it was also the first 3D game on a home console that garnered any real popularity. But despite being a 3D title, it’s still very much a platformer. This makes for some memorable and frustrating experiences. (More on that later.)

To start, let’s talk a bit about the setting for the game itself. The storyline is simple, Mario receives a letter from Princess Peach inviting him her castle. But when he arrives, he discovers that Bowser has invaded the Kingdom and taken the princess captive deep inside the castle walls. To rescue her, Mario needs to recover magical stars that Bowser has hidden away. These stars are stashed inside enchanted paintings scattered throughout the castle. Mario can enter the worlds inside these paintings to recover the magic stars. Once Mario collects enough stars, he can rescue the princess. The game actually features a total of one-hundred-twenty hidden stars to discover, but only seventy are needed to actually complete the title. The rest are available as a challenge for completionists.

Broken down, the game features a total fifteen unique levels, with a handful of smaller secret courses to complete as well. The trick here is, each level features multiple scenarios and challenges. This means that in order to collect additional stars, players will need to complete each level more than once. As players continue to collect stars, more areas of the castle and more playable levels are unlocked.

All in all, I was very impressed with the level design and didn’t at all feel that seeing the same areas over and over became stale. In fact, I began to enjoy the game more as I became more familiar with each course. 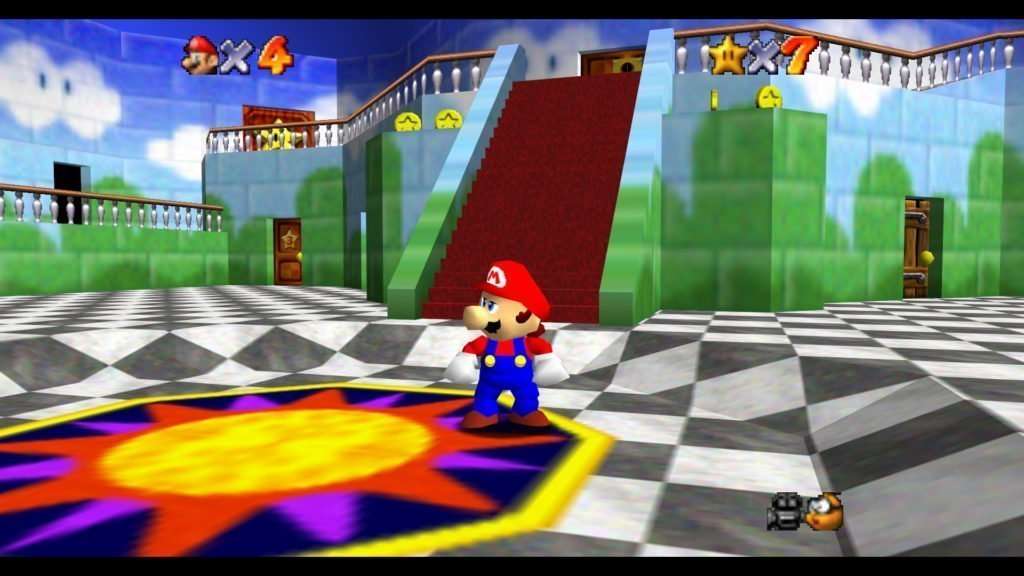 My biggest gripe with the game has to do with the controls. Now yes, I know that playing this title on any system other than the original N64 is going to cause a bit of a headache at first. The game is very much designed around the the controller it was intended for, but even after allowing for a bit of an adjustment period, the overall playcontrol of this game is iffy to me. My biggest complaints have to do with two things in particular. First, the “analog” control stick. Mario can either run or walk depending on how hard you push the stick. Mastering this is can be crucial for navigating some levels. In this aspect, the original N64 controller really wins out here. Modern controllers tend to just feel off. I dunno, maybe it’s just me. Second, and most important – the camera. The game features an auto-adjusting chase cam, that for a large part works well. But frequently, Mario will become hidden behind some solitary object. To rectify this, there is also a manual camera control as well. But sadly, it often doesn’t help much and only leads to more disorientation. Admittedly, this game was one of the first games to feature a manual 3D camera control. So, this was a feature that had a long way to go before reaching the refined standards or today’s games.

For these reasons, playing through Super Mario 64 can sometimes lead to much cursing and frustration. Especially on levels like the infamous ice slide. (Don’t even get me started on that one). But with patience and practice, one does manage to get the hang of things. This is true even with modern controllers. Admittedly, until I sat down for this playthrough, I never had many nice things to say about the title and truthfully, I often wondered just why this game was so universally praised. But, this time I decided to remove any pre-conceived notions I had about the game and just sit down and really explore it. I’m glad that I did. After diving deep into the title, I can now see why Super Mario 64 has earned the near mythical status it has. I only wish I had enjoyed it during it’s heyday. 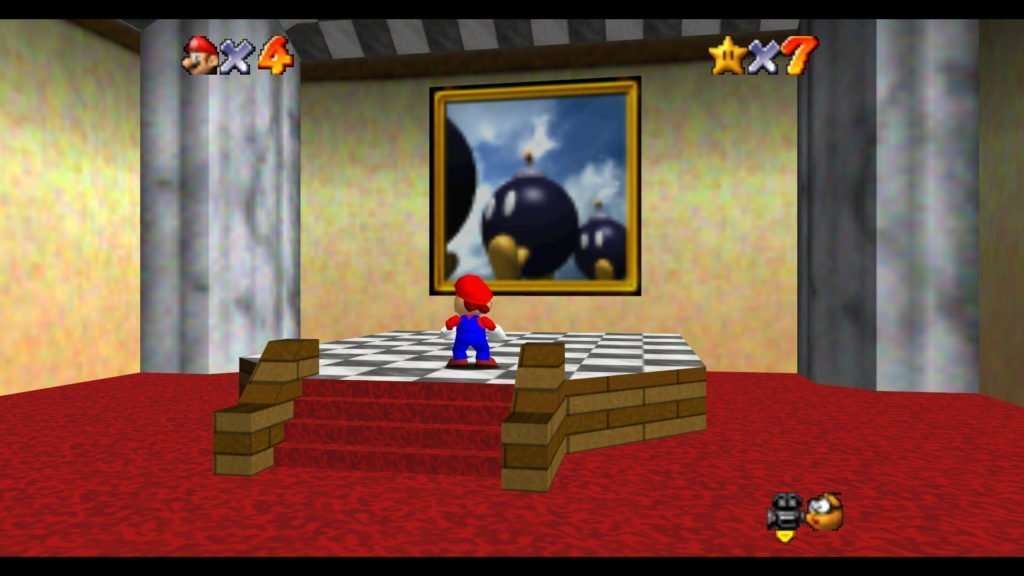 Difficulty: Hard –  This game certainly has a learning curve for first time players. This is true even for gamers who may be familiar with 3D platformers.  Super Mario 64 was a pioneer when it comes to this type of game. As a result, there are some rough edges. This actually leads to some additional challenge outside of what was intended in the game itself, in my opinion. Playcontrol aside, the game is mostly intermediate in it’s difficulty, with a few random exceptions. Completists that want to seek out every hidden star in the game will have quite a difficult time on their hands as most of the real difficulty comes from pursuing these.

Story: Considering this is a Mario title, the story is pretty predictable. The bad guy takes the princess and Mario must come to the rescue. At this point, the plotline to a Super Mario game is almost a bit of an inside joke. But, who’s playing this for the story? Mario is all about fun and challenge.

Originality: Aside from a re-treaded storyline, everything about this title is original. It was one of the first, if not the first 3D platformers ever. This combined with a largely non-linear level system made Super Mario 64 very unique for it’s time. By today’s standards, the game has not aged well, but when put into perspective, nearly everything about this title was groundbreaking at the time of it’s release.

Soundtrack: Rich, well done renditions of Mario classics, but several original pieces as well.  This title also features some minimal voice acting. Which was a first for the Mario series. The now legendary phrase “Itsa meeeee, MARIO!” originated in this title.

Fun: Admittedly, I found this title to be extremely frustrating in many parts. This was largely due to the clunky camera and imprecise game controls. But once I got my feet wet, I began to enjoy this game very much. Also, I’m the only person I know who has ever really had this complaint. So who knows. But to answer the question, “Is this game fun?” My answer is, overall,  yes. Very much so.

Graphics: By today’s 3D standards, this game looks aged. But for the time of it’s release, it was like nothing that had come before. Those players concerned with graphics would do well to check out the Nintendo DS version of the game. This release has a much more polished looked compared to the original or VC versions.


Playcontrol: As you may have picked up, this is my biggest complaint with SM64. I understand and accept that for the best results, playing this game on it’s native hardware is highly recommended. If this is not an option, The Wii U Pro Controller is a great second. Admittedly, the Wii U gamepad is not that bad either. But try to avoid the Wii Classic Controller if  at all possible.


Value:  This game is available today for download from either the Wii or Wii  U eShop for a decent price. (Usually around $10). Occasionally, it even goes on sale. For this price, the game is a great value. The Mario64 DS version is out of print and often sells for an inflated price.

Overall score (1-100): 85 – This game is a classic and well worth the attention of any serious gamer. The issues with play and camera control do keep it from receiving a perfect score, in my mind. Although, there are bound to be many who would disagree with me. Despite this, I recommend this title to nearly anyone