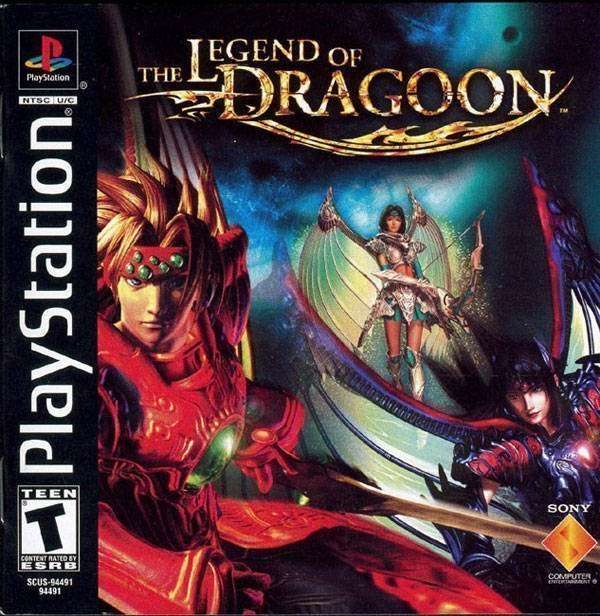 When I announced last month that I was going to resume my PS1 playthrough reviews, I knew I had a number of options to choose from. There are so many classic games for ps1 that I never played when I was younger. I didn’t know where to start. So, I asked a friend for some suggestions. The first thing out of his mouth was Legend of Dragoon. This was a game I’d heard of in passing, but didn’t really know that much about. So I was excited to see what was in store for me.

To start this review, let me say that I really had no idea what I was expecting. I knew this game was going to be an RPG of sorts, but the fine details were completely unknown to me. To start, the first thing I noticed about Legend of Dragoon were the similarities to Final Fantasy VII. The pre-rendered backgrounds looked like something ripped directly from FFVII. The battle screen also, is very reminiscent to PS1 era Final Fantasy titles. But that’s where the similarities stop. Before getting much more into the technical details of the game, let’s talk a bit about the story.

The Legend of Dragoon is a fantasy RPG from Sony. It is set in the world called Endiness. The hero of the game, is a young named named Dart. At the beginning of the game, Dart is finally returning home from a five-year search for a terrible monster that destroyed his childhood home town.  As he approaches the outskirts of his homeland, Dart is attacked by a giant green Dragon. He is nearly killed, but saved by a mysterious armored woman who vanishes just as quickly as she appears. Upon arrival in his hometown, Dart learns that the night before his arrival, the town was ransacked by a neighboring Empire and his childhood friend Shanna was taken captive. Dart decides to sneak into the Empire’s prison to rescue his friend. This is the set up for a long and epic adventure. 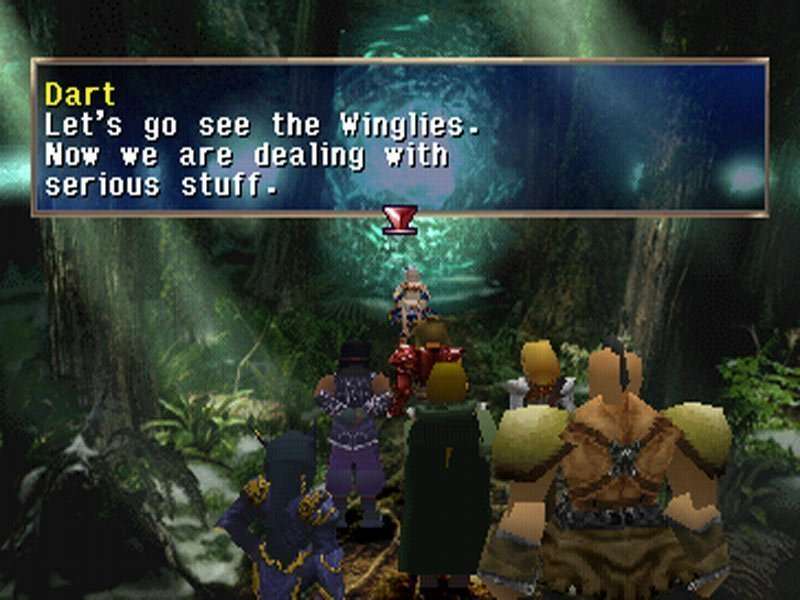 Naturally, as the game progresses the the details around the events at the beginning of the title begin to fall into place. And what we’re left with is a storyline that certainly rivals any other RPG you can throw at it. This is a thankful fact, because aside from the flawless plot, this game has some massive shortcomings. So much so, that I daresay if it wasn’t for the in-game story, I may not have finished this title.

To start, let’s talk about the combat system. On the surface, the combat in this game appears to be similar to other Final Fantasy style RPGs. However, Sony included a new mechanic that at first, seems very refreshing, but quickly becomes cumbersome and annoying. The feature in question involves a moving on-screen graphic. Specifically, a little rotating hitbox. The point is to smash a button on the controller precisely as the ghost image, lines up with the static hit box. Doing so one, or sometimes multiple times will increase your damage output and cause a combo chain type of effect. Seems good right? Well, for different special moves, the speed and timing of each button push is different. For this reason, combat requires your absolute attention in order to be effective. I suppose, that is, after all, the idea. But the flaw here is that combat in this game simply takes too long. Between the fade in and fade out, and all the various combat animations,  the typical battle will last several minutes. Boss fights, can sometimes last 20-30 minutes. Now, that’s to be expected for major or final bosses, but while playing this game, it seemed like every single boss battle took about half an hour. To me, that’s just too long. Plus, random encounters seemed to occur a little too frequently. This combined with the length of the fights themselves, annoyed me greatly.

Another aspect of the combat system is the ability to transform in Dragoon mode. This, in theory, gives your character stronger attack power and access to magic abilities. The magic system is fairly straightforward, but melee attacks as a Dragoon, once again involve a twitch-timer/hotbox type system. Also, spell animations in Dragoon mode seem to be unnecessarily long. (This can be adjusted in the game’s settings, but even so, they still feel longer than they should).

This animation delay, doesn’t just extend to battles. But loading times overall for this game seemed much longer than they should be, and I was actually playing a downloaded PSN copy. I can only imagine how long they must have been on an actual disc. 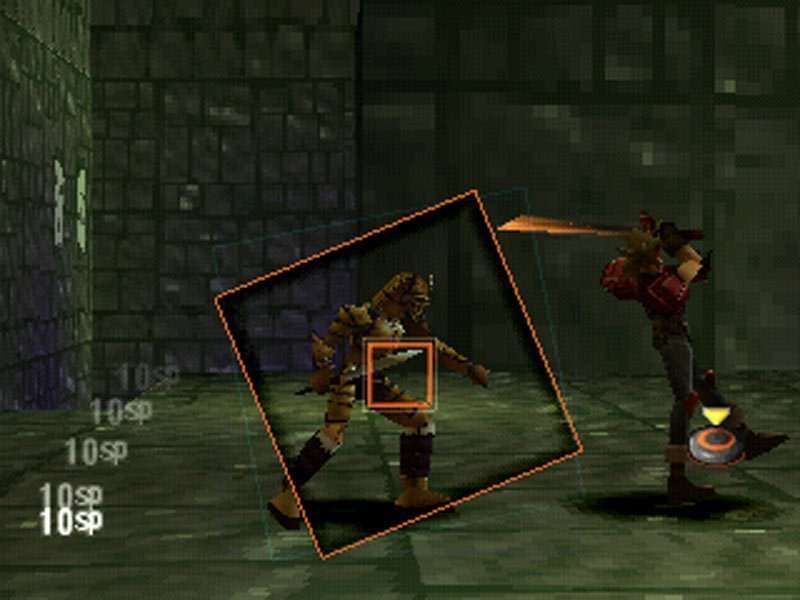 Another complaint, is the terrible translation this game has been given. Sony certainly seemed to opt for cost-cutting here. The quality of the translation is on par with the NES version of Metal Gear. But, admittedly, the poor translation does actually manage to give some of the characters a unique sense of personality.

When it comes to sound, LotD is a bit of a mixed bag. The musical score is very well done, and some of the songs are absolutely amazing. But others (like the main combat theme) seem to feel a bit out of place.  There are minor bits of voice acting in cutscenes and during combat, the quality of the voice acting is less than desireable. But again, somehow seems to add to the charm of the game.

Overall, I have a hard time recommending this title to casual gamers, but hardcore RPG fans will find a lot to enjoy here. 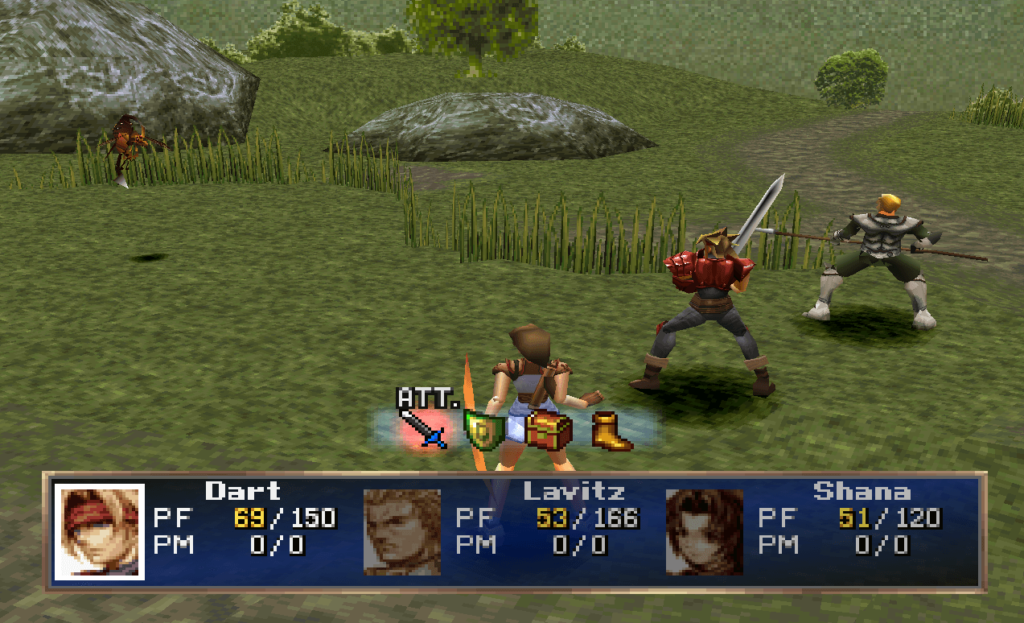 Difficulty: Hard –  Understanding the core concepts of the game itself is easy. The difficulty here lies mainly due to the cumbersome combat system, the frequency of random encounters and the lack of available save points. Taking time to grind levels certainly makes this game a lot easier.

Story: The story here is really the game’s saving grace in my opinion. The tale starts off basic, but over time becomes more and more complex. Yet, somehow never really runs the risk of being too complicated to follow. Very high marks here.

Originality:A lot of things in this game will seem familiar to fans of the JRPG genre. Credit to Sony for trying to introduce new concepts and elements even if they fall flat more often than not.

Soundtrack: The quality of the in-game soundtrack is superb, even if some of the track seem out of place. There are some real gems here.

Fun: For me, the game starting of very well, but by the midpoint I realized that I was forcing myself to play it only to see the finale of the storyline. Plus, the game is looooooong. My playthrough was in excess of sixty hours. This blunted the fun factor for me greatly.

Graphics: For a late-system PS1 title, the graphics are acceptable, but I really feel they could have been better. Character sprites are jaggy and there not much attention to detail. Yes, this was a complaint of FF7 as well, but SE really seemed to be able to overcome this, improving the graphics presentation with each new entry. LotD seems to go the other way. That being said, the pre-rendered backgrounds and FMV cutscenes are very nice.


Playcontrol: Poor. The hitbox/twitch combat feels flawed to me. Yes, I was able to figure it out and get the hang of it, but- I’m still not sure how I did… The animation on the screen doesn’t seem to match the in-game tutorial. Aside from that, the overall controls seem loose and sloppy. I would often have trouble lining up with ladders or navigating around object in the pre-rendered environments.


Value:  Despite all the bad things I have to say about this game, for the prince it’s going for on PSN, in comparison with the vast amount of content the game has to offer, there’s quite a bit of a deal to be had here.

Overall score (1-100): 55 – This game does have some good qualities. But the overall experience can be summed up as frustrating and unpolished. I can only recommend Legend of the Dragoon for the most hardcore RPG gamers out there. And even then, chances are there’s a better example of the genre available to play. This is a game that I would actually love to see remade and refined. There’s some GREAT ideas here, but to me, they are poorly executed.

Available today on:  Currently Unavailable  – (Updated as of Spring 2022)