I swore I’d never touch a Pokemon game. I resisted it for twenty years. To me, it seemed too cute and gimmicky. But now, with the release of the original Pokemon games on the 3DS Virtual Console, I decided to finally  set aside my reservation and see what all the fuss was about. I have finally set foot into the world of Pokemon.

For those not in the know, Pokemon is a huge franchise. What started out as a video game series has since evolved into a television show, trading card game, and a healthy market of toys. Pokemon commands a fanbase that rivals nearly any other in the world of video games. Pokemon fans range from children as young as four years old all the way to adults. I’ve been well aware of the of the mania that is Pokemon for a quite awhile, but as I mentioned above, I’ve always done my best to stay away. It seemed like a big moneysink. You see, unlike most other video games,when you play Pokemon, you have a choice to make. With every Pokemon release, there are always at least two variations (sometimes three) of the game to choose from.  The whole premise behind Pokemon is catching and training monsters and the trick is; each version has monsters that are exclusive to that title. So, in order to “catch them all” as they say, you have to find someone who has the other version of the game and trade with them.

Since I’m currently blogging games from the late-90’s to the early 2000’s, this Virtual Console release seemed to like a great opportunity to jump in and get a taste for the what the series is all about. As always, I wanted have the full experience. So, in my case I purchased a copy of Pokemon Red for me, Pokemon Blue for my oldest son, and Pokemon Yellow for my youngest.  This way, three of us could trade and battle – all the things that Pokemon players love to do. But before I get too much into that. Let’s talk about the game itself. 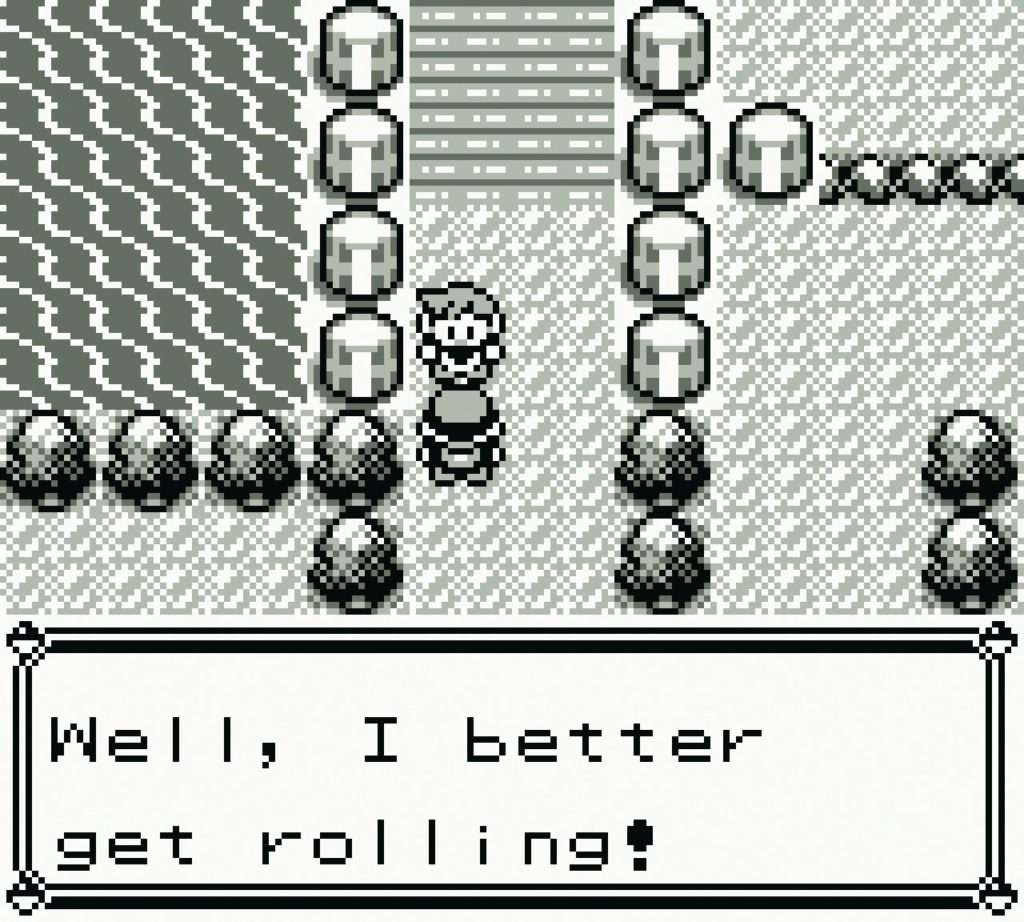 The first Pokemon games were released in Japan in 1996 as Pokemon Red and Pokemon Green.  Later, a slightly modified version called Pokemon Blue with updated artwork and different catch-able Pokemon, was made available. When the series finally reached the US two years later, the original “Blue” version was revamped again and released in two flavors under the names of: Pokemon Red and Pokemon Blue. The western release of the series was a smashing success, this was helped in part by the Pokemon anime that had also found it’s way to the shores  of the US by that time.  Eventually, a third version was also made available to US players; Pokemon Yellow (aka: Special Pikachu Edition). This is is essentially identical to Red and Blue, with the exception that it features the famous “Pikachu” character as the starting Pokemon instead of the regular choice between three different monsters. Despite all these different versions, it is important to recognize that regardless of the version you select, Red, Blue, Yellow are all essentially the same game. With the exception of Yellow, the only difference among the versions are the Pokemon that can be encountered randomly.

Red and Blue were released for the original Game Boy, as a result these games are look and feel very dated by today’s standards. Regardless, they are still quite enjoyable. The graphics remind me very much of those found in the Final Fantasy Legend series. Pokemon Yellow is a bit different, while still being a “Game Boy” title, it offered some direct support for the Game Boy color, so when played on a GBC system, Yellow also contains some crude coloring that cannot be found in most other GBC titles.

As far a gameplay is concerned, Pokemon is essentially a cross between an RPG and a collectible trading card game. The storyline of the game is this; Pokemon, also known as Pocket Monsters, are funny little animals that can be found all over the region of Kanto (the fictional setting in which the game takes place). Right now, the biggest craze in Kanto is collecting Pokemon and training them to compete in battle. But, have no fear. Pokemon don’t fight to the death. You play as a young boy who has aspirations of being a Pokemon Trainer (a person who catches, tames and raises wild Pokemon). At beginning of the game you are taken under the wing of the famous Pokemon Professor Oak, and tasked with making a record of all known Pokemon in the region. This ledger, also called a Pokedex, is updated automatically as you catch and encounter various Pokemon in the game.  It is with this task in mind, that the adventure of the game unfolds. It is important to note, the main scenario of the game can be completed without actually catching every single Pokemon. But, completing the Pokedex is often the ultimate goal of many players. 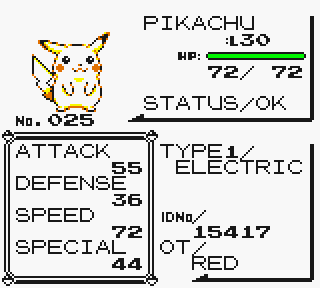 Pokemon are caught and carried in little spherical containers called Pokeballs. Pokemon can be summoned for battle and recalled as needed. Each Pokemon levels independently from experience points earned during battles. As Pokemon level up, they can learn new abilities and combat techniques. Many Pokemon will also evolve into stronger versions as they level up. Each Pokemon in the game is categorized under a certain “Type”. For example, there are Grass, Fire, Water, Electric, etc Pokemon. Naturally, Grass Pokemon are weak to Fire-based attacks but Fire Pokemon are weak to Water-based attacks, etc. So the key to game is learning when to to use certain types of Pokemon to overcome battles with your opponents.

As you can imagine, catching and leveling a lot of Pokemon can end up being quite the grind fest. But truthfully, you really only need to focus on a handful of Pokemon to complete the game.  Eventually, you may reach the point where your Pokemon have leveled so high, that they no longer follow your commands.  This is overcome by challenging “Gym Leaders” (Pokemon Champions). Upon defeating a Gym Leader, you will be awarded with a badge. Badges offer a number of perks, often these include being able to command Pokemon of a higher level.

One of main features of Pokemon is being able to trade with other players. As mentioned earlier, this is only way to actually complete the entire Pokedex. Originally, this was accomplished using a special cable that allowed two people to link their Game Boy’s together. However, with the Virtual Console release, this can now be accomplished wirelessly.   It is also through this method that two players can engage in Pokemon battles with each other.

All in all, I wasn’t really certain what to expect with my first Pokemon game. A part of me thought that I would find it a little too childish. But in the end, I really enjoyed it. I wish I knew Nintendo’s plans regarding future Virtual Console releases, as I’d really like to experience the games in their original versions. But as it stands now, I’ve already acquired a number of other Pokemon games and remakes and I full intend to explore the series as a whole.

If I had to give my honest opinion of Pokemon Red/Blue – I’d say that it certainly zeroed in on an fresh concept. Overall, my experience with the game was nothing but positive. If I had to find fault with the title, it would be with inventory management and UI delays.. The game throws more items at you than you can carry at any one time. This is alleviated through a storage system in the game. But accessing storage is bothersome and the UI around this system is clunky and monotonous. I understand that many of these issues were addressed in future versions and remakes. I should go on record now by declaring that I fully plan to check out the remake for this first generation (known as FireRed/LeafGreen). But for my first outing, I really wanted to experience the games that started it all. 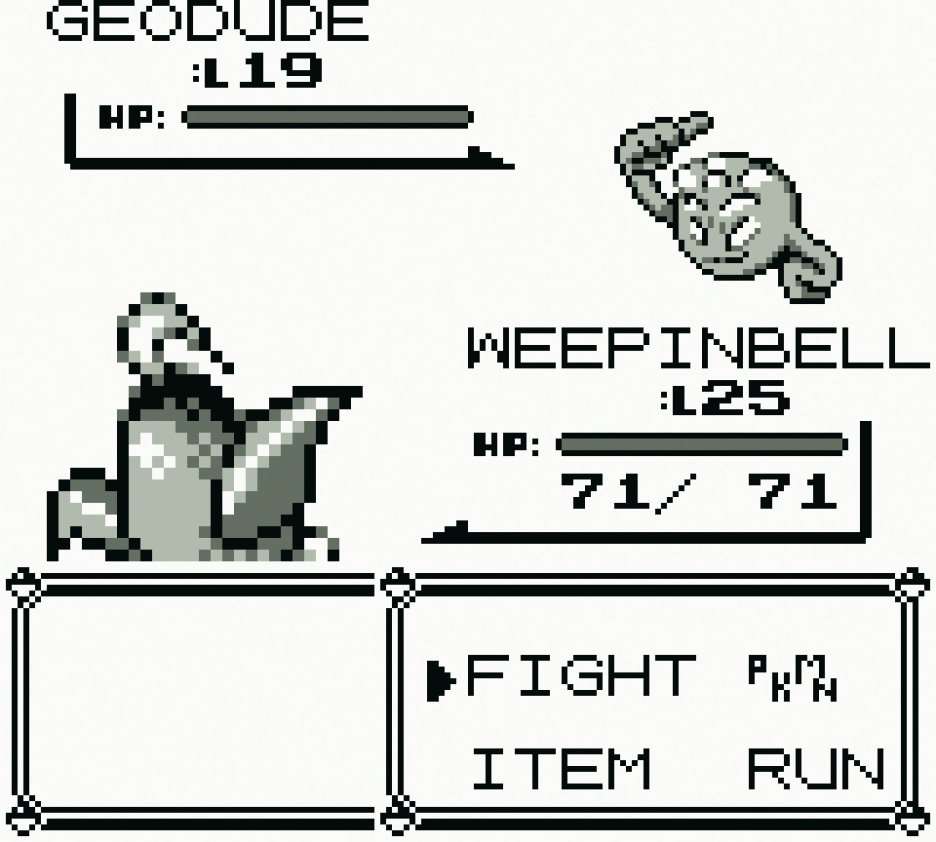 Difficulty: Medium –  Despite appealing to young children, this game is actually quite challenging at times. Completing the main game is no easy task, but one that is manageable for almost anyone. The big challenge here are for those that want to “catch them all”. At the time of release, this would have required a lot of patience and networking with other Pokemon players. These days, this is much easier due to internet forums and Facebook trading groups.

Story: Surprisingly, the storyline in the game is quite rich and enjoyable. The whole Pokemon mythos and lore is very well presented and detailed. Many aspects of the plot do seem to be aimed at younger players, but it can still be quite charming for adults.

Originality: Pokemon was a groundbreaking game. Releasing multiple version of the same title, inter-game trading and competition were things that were virtually unheard of at the time. Not to mention the whole concept of Pokemon collecting. Nintendo really managed to forge their own way with this title.

Soundtrack: The soundtrack here is a mixed bag. The music is catchy, but suffers greatly from the limitations provided by the Game Boy system.

Fun: I found this game to be a much more entertaining that I expected. The game itself was fun, but I actually found more enjoyment in the multiplayer aspects of the title. Organizing trades with kids, planning which exclusive Pokemon to catch helped to pave a pathway of communication that I normally would not have had with them. That’s worth a lot.

Graphics: Game Boy titles are notorious from some pretty crumby graphics. This game certainly suffers from the graphical limitations from time to time, but Nintendo managed to do the best the could with the confines of the system.


Playcontrol: Overall no problems here. I did find the UI of the Pokemon storage system to be overly annoying and slow. But that’s really the only complaint I can make.


Value:  Pokemon games often sell at a premium price. The secondhand market is even more expensive as many titles are out print. Nintendo gave fans a huge break by bringing these games to the Virtual Console and at a price of $10 per game. This is an amazing deal considering the amount of content.

Overall score (1-100): 100 – As much as I hate to come out and admit this… I love Pokemon. Pokemon Red was simply an amazing game. It’s much more than I expected it to be. I fear that this is the start of a new addiction. This game certainly shows its age, and I imagine that the remake is probably a much better experience all around. But, looking at this game through the eyes of a new player, and keeping it’s age in mind, it receives a perfect score from me.