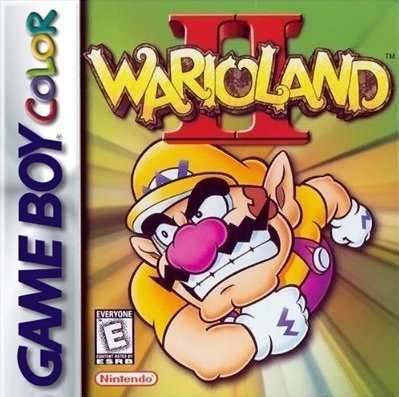 Next on my catch-up list is Wario Land II, a quirky little game that serves as both a sequel to Super Mario Land 3: Wario Land and the start of Wario series proper. I have read that Wario Land II was originally released as a standard Game Boy title sometime in 1998 then later ported to Game Boy Color in 1999. I have tried to verify this, but I have only ever been able to locate copies of the GBC cart. Perhaps, the original version was released in Japan only, who knows. So for the sake of this review I’m going to go full-in with the GBC version.

Aside from the colors, Wario Land II is very similar in many ways to it’s predecessor. As far as the story is concerned, greed is once again a big factor. In the last game, Wario’s goal was to amass as much wealth as possible. This eventually pitted him against the infamous Captain Syrup. This time around, the captain has sent her goons into Wario’s castle to steal some of his sacred treasures. The game begins with Wario waking up in the morning and discovering the chaos left behind by the thieves, It continues as he tracks them to their lair for the ultimate show down with Captain Syrup herself. 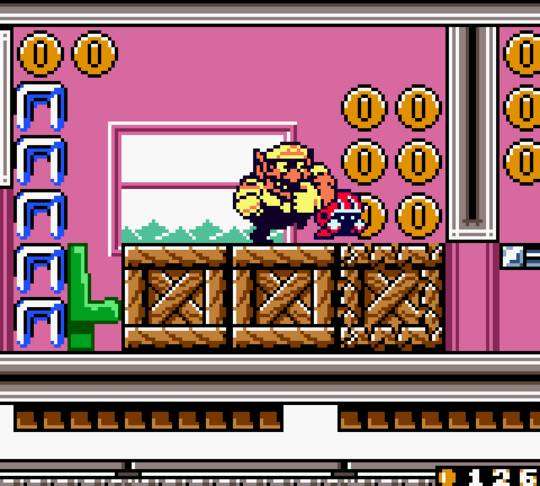 Just like in the original game, Wario’s primary form of defense is dashing and slamming into his enemies. Unlike the last game, the whole hat-based powerup system is gone. This time, Wario will encounter certain enemies that can inflict him with various body-altering conditions. For example, torch bearing monsters will light him on fire, bees will sting him causing him to blow up like a balloon. While these afflictions initially appear to be negative, using them to your advantage is a key element of gameplay. Certain blocks can be eliminated while Wario is aflame, etc. Essentially, each level is a cross between your standard platformer and an interactive puzzle. Players will need to use their wits to figure out how to overcome the obstacles in each level so that they can reach the goal.

While the puzzle aspect can be tricky at times, this is made much more tolerable by the fact that Wario cannot die. Typically the worst thing that can happen to player and finding themselves dumped back at the start of a level, thus having to navigate certain areas several times. Also worthy of note, each level contains a hidden door that contains a mini-game and change for Wario to collect a rare treasure.

The game itself is fairly straight forward and can be played from beginning to end in pretty short order. However, there are a number of hidden levels and treasures to be discovered. If a player wishes to get a full 100% clear on the game, there’s going to be a lot of work ahead of them. This also gives the game quite a bit of replay-ability. There’s a total of five different endings for players to experience. 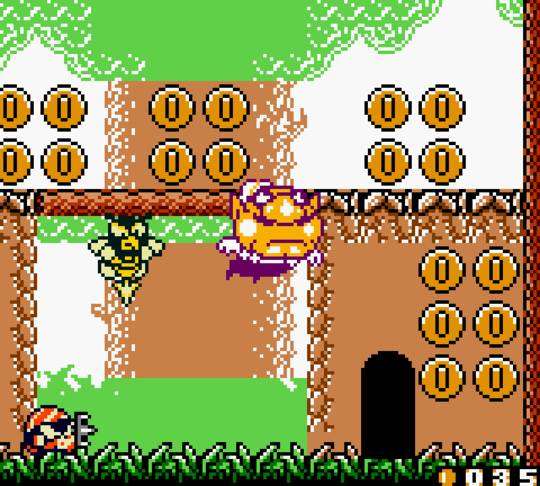 Difficulty: Medium –  The base game is fairly simple if your goal is simply to play from beginning to end. The fact that Wario cannot die really helps to make this the case. Some of the boss battles can be a bit tricky, but typically it doesn’t take long to figure them out and overcome. The biggest challenge in the game has to do with completing all of the mini games, collecting all the treasures and getting a 100% completion rate.

Story: As typical with Mario/Wario games, the story is simplistic. Not very much depth here. But for the type of game, this is appropriate.

Originality: Despite being another classic platformer. Nintendo managed to keep this title feeling fresh with the overall design of Wario’s abilities and the way he can use enemy afflictions to navigate and overcome obstacles.

Soundtrack: Nothing really special to note here. The soundtrack of the game is quirky and funky. It’s fitting, but not very ground breaking.

Fun: For what it is, Wario Land II is a lot of fun. It’s perfect for when you just want to kill some time. Perhaps a plane ride, or a road trip. The characters and animations are amusing and well done. This game packs a pretty healthy amount of fun into a fairly small package.

Graphics: From my experience, most Game Boy Color games look like washed-out recolors of black and white titles. Not this game. Wario Land II really shows what the Game Boy Color was capable of. The colors are bright a vibrant. Aside from the blocky limitations of the portable system, Wario Land II is a beautiful game.  This is even more so if you are playing the virtual console version. The backlit screen of modern hardware does wonders.


Playcontrol: This is your standard platformer experience. As before, it has a much different feel that the Mario games, but if you’ve already played Wario Land, you’ll feel right at home.


Value:  Considering the surprising amount of content packed into this little game, you can’t go wrong with the $4.99 price point that Nintendo is selling this for on the Virtual Console.

Overall score (1-100): 85 – Wario Land II is a simple, fun platformer. This game was made at a time when most handheld games were still intended to be short little time-wasters. With that in mind, the game exceeds expectations. For the price, this is a title that almost any 3DS owner should pick up if they want a taste of some classic handheld gaming.