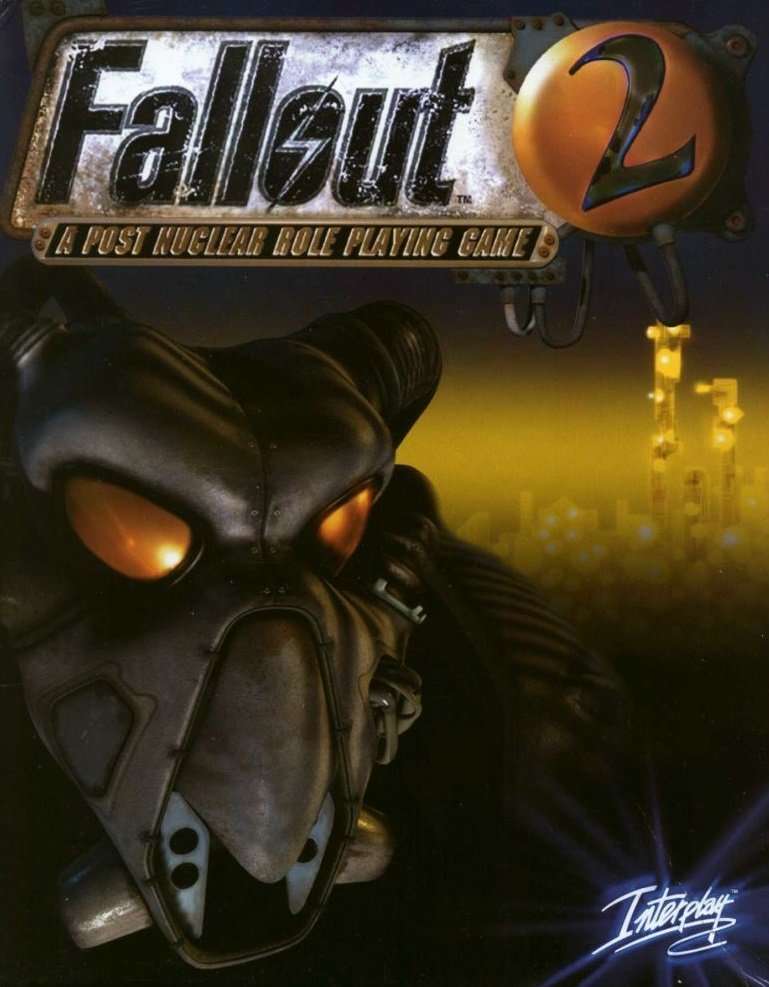 Having recently completed the original Fallout, I decided to plow right along into the next entry in the series. I enjoyed the first game so much, I was excited to see just what the sequel had in store. While I was not disappointed, I still ultimately found Fallout to be a better game in my personal opinion. Let’s find out why…

The sequel, Fallout 2, was released shortly after the original game. For the most part, the two titles are very similar in many ways. Fallout 2 seems to run on the same engine as the original. Both the gameplay and graphics is nearly identical. So if you have any experience with the original title, there is nearly no learning curve for Fallout 2.

This game takes place several generations after the original title. In this game, you play as a descendant of the original “vault dweller”. Your character is a member of a tribal-type village that was founded by the hero of the original game. Due to extreme drought and famine, the people of your village are suffering. You have been tasked with venturing out into the world in search of a legendary artifact called the Garden of Eden Creation Kit, a device said to contain the power to grow crops in even the most barren conditions. With this quest in mind, you take your first step into the dangerous world outside your village. 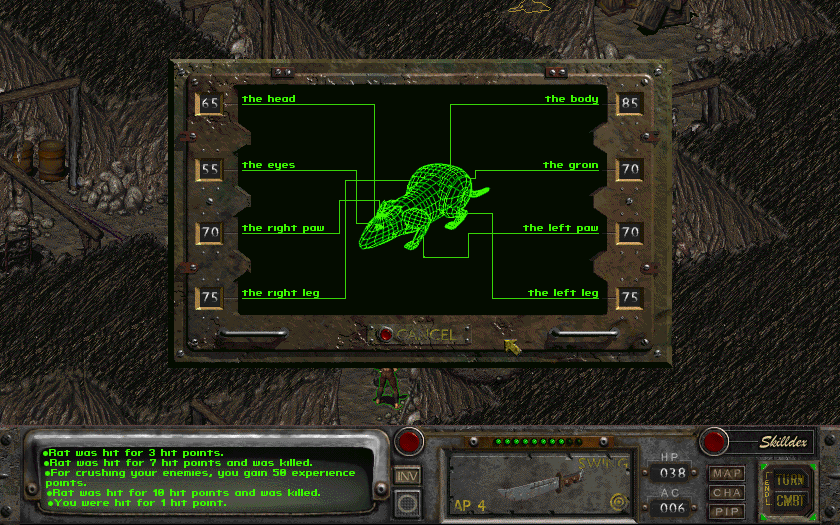 As mentioned earlier, nearly all game-play aspects of Fallout 2 are identical to the original title, albeit with some minor refinements. This time around there are some new traits and perks as your character levels up, but the core game play mechanics are the same. Despite the similarity, there’s still plenty of challenge to be found here even for seasoned players. For example, at least from my observation, the NPC AI seems to be sharper. In this game, characters seemed quicker to go hostile if you approached them while your weapon was out. While this was also an issue some of the time in Fallout 1, it seems much more consistent in this title.

Compared to the original Fallout, Fallout 2 is a much more deserving of a Mature rating. The first game certainly had it’s share of violence and strong language, but Fallout 2 cranks both of these up significantly. On top of that, the game also features plenty of sexual themes. In fact, prostitution and using sexuality as a tool is now a legitimate game play tactic.

Content-wise, Fallout 2 expands on the mythology presented in the original game quite well. There’s plenty of new lore to dive into for players willing to seek it out as well as a number of nods to both places and characters from the original. This game is significantly longer as well. The number of optional quests and things to explore are plentiful. 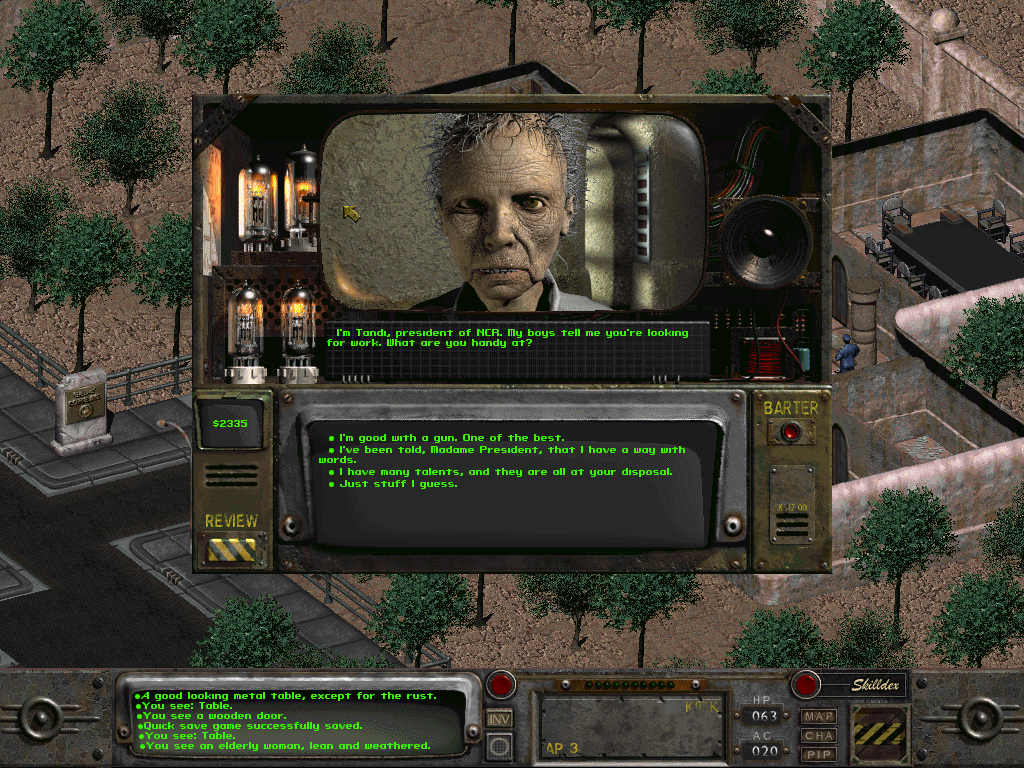 Also important to note: like the first Fallout, players are going to want to be sure to either purchase the Steam version or resort to unofficial patches to ensure that the title plays well on modern systems.

All in all, Fallout 2 is a very well-rounded sequel. I found the game to be quite enjoyable, but perhaps not quite different enough from the original to make it as memorable. That’s my personal opinion. But, I know that many people consider Fallout 2 to be the better of the two. So, this might be a case of play it yourself and decide. 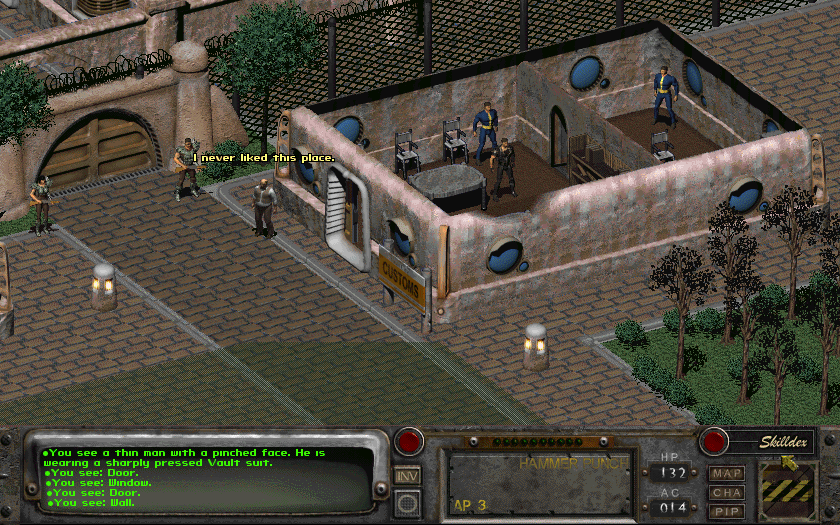 Difficulty: Medium –  Again, if you never played old school CRPGS, there may be a bit of a learning curve here. But, players familiar with the original Fallout will have a much easier time. In my opinion, this game seems to be just a tad harder than Fallout, but still tends to fall into that “medium” difficulty category.

Story: Taking place eighty years after the first game, Fallout 2 keeps with the lore and setting introduced in the original. The storyline here is engaging and very well done.

Originality: Fallout 2 is essentially a carbon copy of the original in many ways, but considering it is a direct sequel, this is largely forgivable. Most changes found here are tweaks and enhancements.

Soundtrack:Most of the in-game score is ambient and mood-setting. Which I found to be appropriate for this kind of title.  Again, the voice acting is top notch.

Fun: Fallout 2 is an excellent title and is a lot of fun. Players who enjoyed the original, or who like CRPGS in general will find a lot to like with this title.

Graphics: Even though this is an older title, the graphics still look pretty good. Modern players will want to seek out HD resolution patches to make the game perform well on current-day systems. Just like Fallout, this title was released during a time of crude graphics integrated with CD-quality video. Some of the NPC interactions looks much better than the rest of the game, giving the title a mixed bag sort of feel graphically. Graphically, this game is nearly identical to Fallout 1.


Playcontrol: The controls for this game will feel foreign and awkward to someone who doesn’t take the time to read the game manual. That being said, once you get the hang of things it tends to be quite smooth overall. My biggest complaints with the game have to do with mouse pointer accuracy and viewing angles. I’m looking forward to seeing how some of these issues are dealt with in future entries in the series. I noticed no real improvement with this from the original Fallout


Value:  This game can usually be found today for $10 and under. Considering amount  how replayable it is and the content packed into the game, this is a steal and well worth the price. Many hours of fun for a low price.

Overall score (1-100): 90 – Fallout 2 is a good sequel to a classic game. While not as groundbreaking as the original, this is still a title that deserves a place in any PC gamer’s library. Highly recommended.