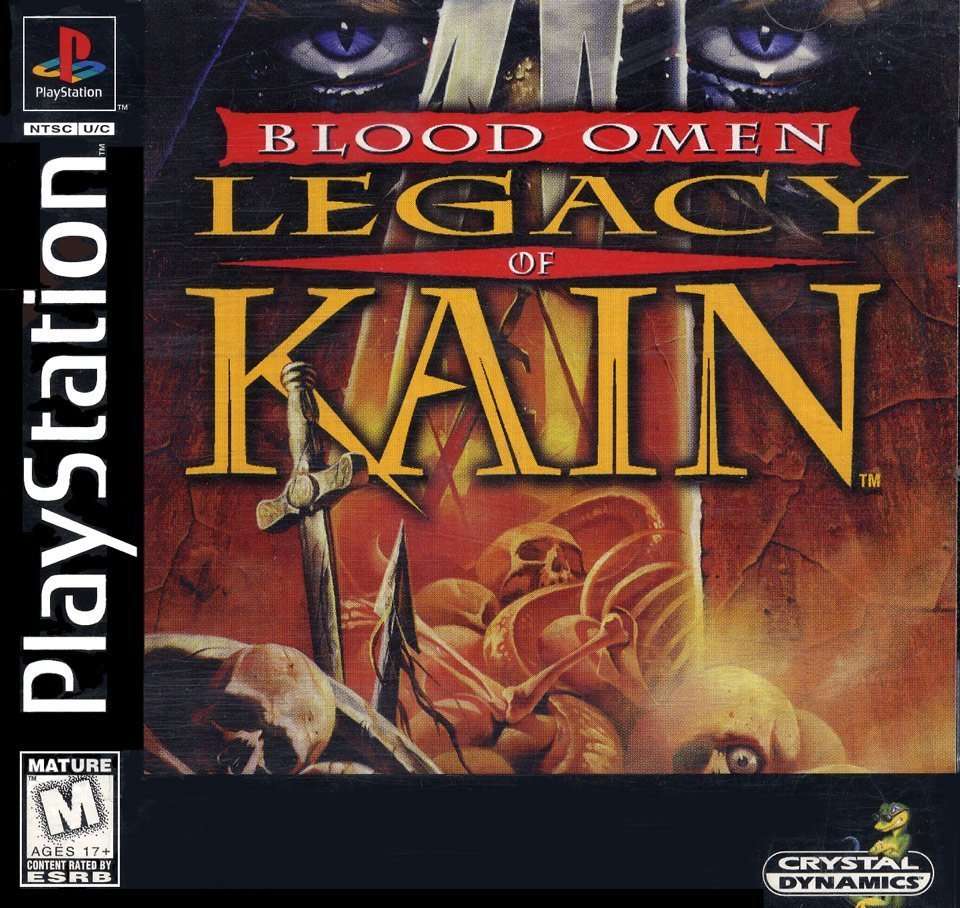 “VAE VICITS!” –   That is the battle-cry of Kain, the lead character of Blood Omen: Legacy of Kain. Anyone who plays this game for more than five minutes will certainly be familiar with the phrase. It is repeated at random, frequent intervals as you play through this title. In fact it is repeated so often, that on more than one occasion I felt the need to mute my volume. But before we go down that rathole, let’s discuss the basics.

Blood Omen: Legacy of Kain is a title that I had no experience with whatsoever prior to playing through it for this review. It is a title that I’d seen pop up from time to time on lists of “The Greatest Playstation Games of All Time”. So, when I compiled my own personal backlog of PS1 games, I made sure to include it.

Blood Omen, is a gothic, action/adventure game. In this title you play as Kain, a murdered noble from the land of Nosgoth who is resurrected from death by a powerful necromancer. In return for a life of undeath, Kain is tasked with hunting down the members of a mysterious order. As you play through the game, the secrets surrounding your mission become clear, and Kain must ultimately determine if he will follow the path of good, or evil. 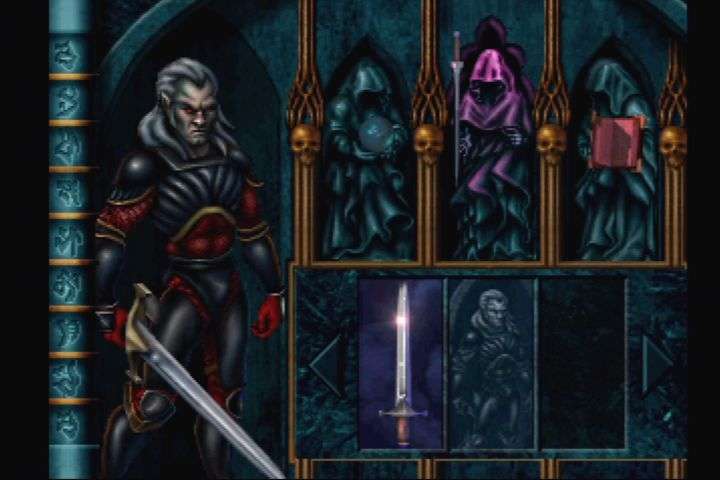 Sounds cool right? Well, in many ways it is, but for each good quality the game also has an equal number of drawbacks. First, let’s discuss the gameplay itself.  Blood Omen is basically a birds-eye view adventure game. Not unlike the original Legend of Zelda. In fact, in many ways it’s quite similar. There’s an open world to explore that’s filled with nooks and crannies which contain power-ups, abilities, weapons, armor, etc. You start the game in a pretty vulnerable state, but as you progress and increase in strength, you soon become a force to be reckoned with. Kain can take damage through combat, via traps and even by certain weather conditions (rain, snow —  he is a vampire after all). Luckily, Kain can recover his energy by feeding on the living. This includes various NPCs in the game and even enemies who may be on the brink of death. Typically, as you progress through the game and defeat bosses, Kain will unlock new powers and gear that both increase his strength, but also give him the ability to explore previous inaccessible areas.

All of the above sound like the set up for what should be an amazing game. So what’s the problem? Well, to put it gently, this game has issues. Issues so severe that it does impact player enjoyment. To start with, Blood Omen has HORRENDOUS loading times. Now, I’m not talking about Saving/Loading player data. I’m talking about nearly anything. Press start to bring up the inventory – you will encounter a two to three second load time, same with bringing up the map, or entering a building. Even non-loading functions within the game such as transforming from human-form to that of a wolf, you will experience a two to three second transition time. What makes this worse, is the fact that I played the digital-download version from PSN. I can only imagine how much longer these load times might have been when playing from the actual disc.

But the issues don’t stop there. The playcontrol is not at all intuitive. The default button controls don’t feel natural and all-to-often are not responsive at all. While the game features some very impressive voice acting, Kain’s battlecry is repeated so often it becomes annoying almost instantly.

So, all this considered, what’s the verdict here. Well, despite it’s many flaws, I can certainly see what made Blood Omen interesting at the time. The game is very mature and appealed to an audience that had not been really catered to thus far. Horror-themed games were few and far between around the time this came out. Plus, compared to other titles of the time, the graphics and voice acting were considered top of the line. So I can see how many players may have been enthralled with the title. But sadly, at least in my opinion, Blood Omen: Legacy of Kain does not stand up to the test of time. This is a game that might be a prime candidate for a remake. Also, the game did spawn a number of sequels which are also highly regarded in their own right. So, perhaps I might enjoy those a little better. 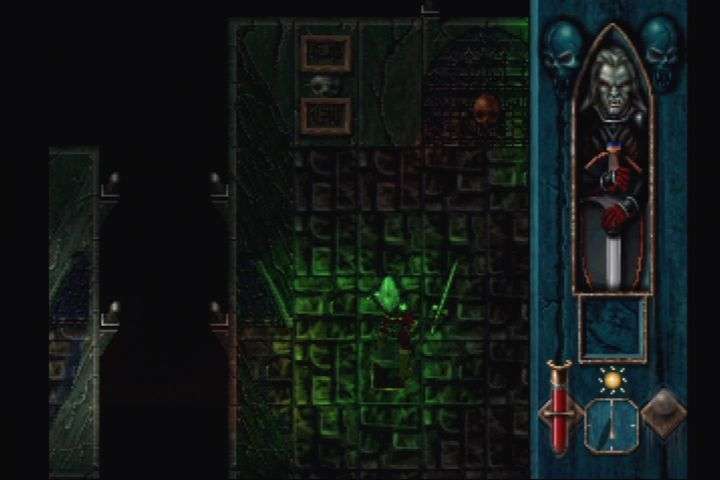 Difficulty: Medium –  This is one of those games that starts off fairly tough, but softens up over time. As Kain grows in strength, the overall difficulty tends to lessen a bit. The biggest difficulty for me, was getting my head around the way the game worked and learning it’s quirks.  Reading the actual game manual is a must to overcoming this.

Story: Here we have one of the best things about this title. The tale of Kain and even the lore behind the land of Nosgoth itself is very well done. Fans of gothic/Eastern-European horror would really find something of value in the story told over the course of this game.

Originality: Blood Omen is a mixed bag when it comes to originality. The overall game design presented here is certainly nothing new, but I feel that developers really put a lot of effort into being revolutionary by appealing to an adult audience.

Soundtrack: The background music for the seems largely atmospheric. It’s certainly not catchy or all that interesting in itself. But, it serves the game well. The real shining star here is the voice acting. The lead character has personality and flair. The acting is not cheesy and phony like so many titles of the era.

Fun: Generally speaking, I did not find this game to be very enjoyable. I did find it to be very interesting in many regards, but to be completely honest. I was glad to see my time with the game come to an end. That’s never a good sign.

Graphics: Mixed here as well. The cutscenes are dated and pixelated. But for the time, they were top of the line. The game itself is overall very attractive. Especially when zoomed into the action. But if you pull the camera out, things tend to get messy quick.


Playcontrol: I encountered major issues with the playcontrol for this title. Granted, I played this PS1 title on the PS3, but typically that poses no issue. To be sure, however, I also downloaded the game to my PSP – only to find the experience worsened. So far, I’m only talking about the actual controls. The long loading times and overall “sludgeiness” of the title was a real downer for me.


Value:  These days, Blood Omen can be found for around $5.00 on the PSN store. Which, to be fair, is a very good price even with all the flaws I mentioned above. So, if you’re curious, you won’t be out much even if you end up not digging the game.

Overall score (1-100): 50 – For me, this game was largely a stinker. But, it does have several qualities that a certain niche of players would find enjoyable. If you’re one of those types, then by all means, this might be the game for you. But for a casual player looking for the best of the what the PS1 had to offer, you may fare better by looking elsewhere.