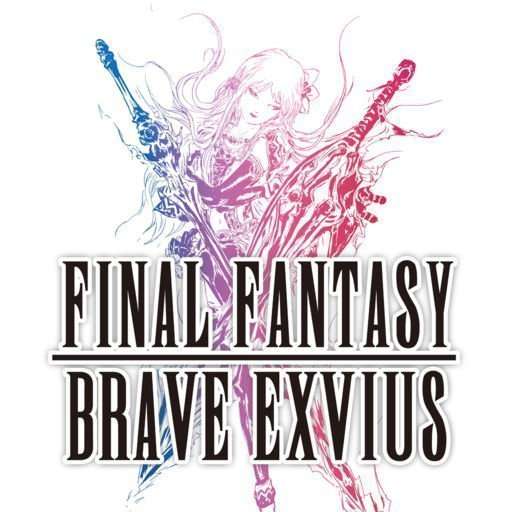 Stepping away from my regular reviews for a moment, I want to share my thoughts on Square Enix’s latest Mobile title: Final Fantasy Brave Exvius.

I typically don’t pay much attention to mobile games. Based on my experience, mobile titles usually end up being one of two things; poorly designed, pointless wastes of time or flashy – but disappointing cash hogs.  I have not yet reviewed, but did spend a great deal of time with SE’s previous mobile FF outing: Final Fantasy Record Keeper and found it to be a bit of both. So, I didn’t exactly have high hopes with Brave Exvius when it was announced. But, after spending nearly a month with this title, I’m happy to admit that my expectations were wrong.

Final Fantasy Brave Exvius is like no other Mobile game I have ever played. The level of immersion and attention to detail both shocked me and renewed my hope for the platform. Now, I’m not slamming smart-phone gaming. I’ve thoroughly enjoyed a number of mobile games over the years. Fruit Ninja and Angry Birds are great at what they do. They are the perfect match for a casual touch-screen experience. The problem usually comes when a developer tries to introduce a time-honored classic IP into the mobile environment. For example, Castlevania Puzzle is a prime example of a mobile shoehorn. So what makes Brave Exvius different? Well, a number of things. 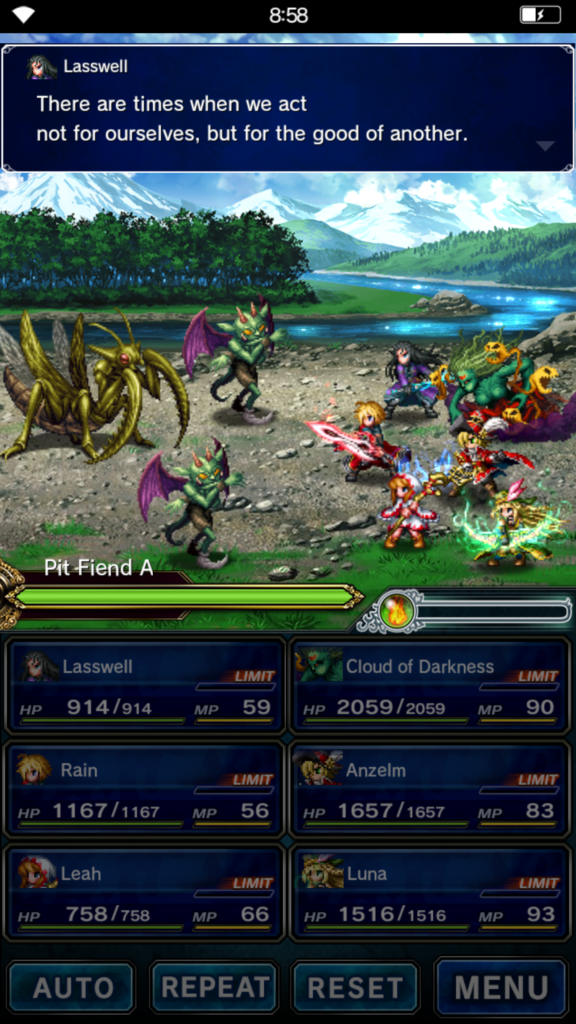 First, this game has a storyline that would make any Final Fantasy title proud. The story revolves around Rain, the young prince of Grandshelt Kingdom and his companion and knight, Lasswell. The two of them are traveling by airship on the way home when they encounter a strange woman trapped inside of a crystal. She communicates with Rain telepathically and they follow her instructions until they come upon the Earth Shrine; a location that is currently under attack by the forces of the mysterious Veritas. Despite their best efforts, the shrine is destroyed, but our heroes are undeterred. Rain decides to make a name for himself by tracking down this mysterious attacker and putting an end to his nefarious schemes.

So already, based on the above, we have a storyline that sounds like a real game, and not a simple little mobile title. But there’s even more. The game itself features quests, items, and character advancement just like a standard RPG. So does that mean the game isn’t filled with micro-transactions that nickle and dime the player to death? Well, not exactly. There are certainly micro-transactions, but for the first time in quite a while I didn’t feel like I had to spend money to get the most out of the game.

You see, Brave Exvius works like this, you have your two main characters, but you can recruit “visions” to fill the three remaining party slots (This name is explained in the storyline of the game). Visions are essentially additional characters. A large number of these are familiar faces from other Final Fantasy games.  Some Visions are better than others. When it comes to obtaining new Visions, you spend in-game currency on a draw. You never know what the results of your draw will be. It might be a common Vision that you have already received multiple times prior, or it might be an extremely rare character that’s only available for a limited time. Regardless, you can sell or use your duplicates to enhance existing characters already in your roster. So there’s your typical mobile “grab-bag” catch. And yes. in game currency can be purchased for real money. As can items that enhance your characters. So, admittedly, it is entirely possible to spend a load of real money to boost your characters, but so far doing so has no competitive advantage against other players. That being said, I’ve not spent a dime on this title and I’ve still enjoyed it immensely. (Although, I admit that I did receive a number of bonus items and currency from being an early adopter of the game). 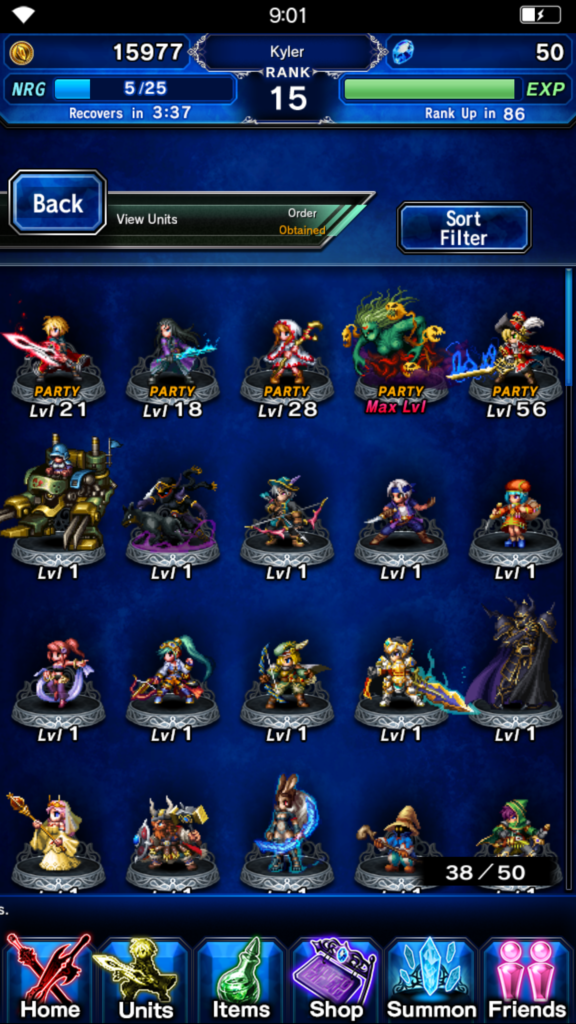 So, as I mentioned above, characters can be enhanced using special items. Once a character has reached maximum level (either through standard gameplay experience or by artificial enhancement), you can then use special materials to “Awaken” that character. This resets their level back to 1, but they retain their skills and become even stronger in the long run.  The items needed are obtainable through normal gameplay as you progress through the story, but to be honest some of them are pretty uncommon. So what is the best way to obtain them? By participating in something call “The Vortex”. The Vortex is essentially a portal to special event-levels, some of which are only available for a limited time. Each of these levels have a special theme. For example, the Cactuar Dunes features Visions that are ideal not for using in your party, but instead to be consumed as enhancements for other characters. Likewise, the Gil Snapper’s Cave features Visions that are best sold for in-game currency. These areas are typically available during the weekend or special events. Like many mobile titles, access to these levels are often locked out at first. Unsealing them costs in-game currency.

So as you can see, the temptation to spend real money is always there at every turn. But again, it’s not a necessity to fully enjoy the game.

In the month that this game has been out, there’s already been one content update that expands the game story past it’s initial launch. I look forward to seeing more of these in the future. 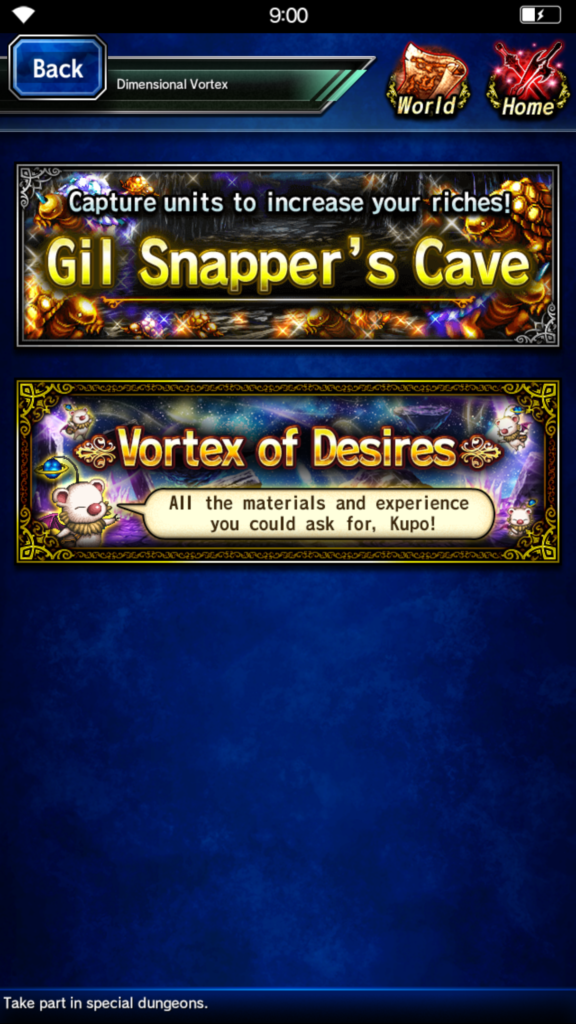 Difficulty: Variable –  Players who are interested in experiencing the storyline content of the game will have no real issue at first, but later battles in the game story do tend to be tough from time to time. Taking the time to actually learn and understand the game’s mechanics go a long way when it comes to success. Most of the really tough content comes in the form of Vortex Levels (I’m thinking about the Demons Unleashed level specifically).

Story: As noted above, the storyline for this game is very solid and much more than I expected from a mobile title. Excellent stuff here. I can’t stress this enough.

Originality: I guess it does need to be mentioned that this game is actually somewhat of a Final Fantasy skin over an existing mobile game called Brave Frontier. So, storyline and other FF specific things aside, if you like this game and the core concept behind it, you really owe your thanks to Brave Frontier. That is the game is really broke ground with the original concept.

Soundtrack: In a word: Amazing. The score to this game is breathtaking. It’s the first soundtrack to a mobile title that I’ve ever considered purchasing. It’s simply too good to explain. You’ll notice this right away when starting the game. SE spared no expense here, it’s just as good if not better than some of the more recent games in the proper Final Fantasy series.

Fun: I have been enjoying this game daily since I added it to my mobile device. I don’t sit for hours and grind away at it, though. I imagine if you took that approach it might get old pretty quick. I’m pretty casual with mobile games anyways. For this title, I usually put it on in the morning, collect my daily rewards, run a couple of easy daily quests, vortex dungeons, etc. Then, I come back later in the day and play through some of the storyline levels. By following this formula, I have something new to look forward to nearly every day with this title and the game stays fresh and entertaining.

Graphics: Very well done. The artwork in the game is reminiscent of 16-bit era FF games. I find this appropriate for a mobile platform. From time to time, SE throws in a jaw dropping cutscene as well that’s beautifully rendered. All of this makes Brave Exvius is a gorgeous game.


Playcontrol: Touchscreen based controls that are overall accurate. But combat occasionally requires you to flick at menus in certain direction, my flicks are sometimes misread, resulting in unintended actions. But other than that, no real issues.

Downloadable Content: In-game currency can be purchased with real money, as can materials and other items that can be found in game.


Value:  The game itself is available for free. Optional purchases can range from as little as $.99 to nearly $100 USD.

Overall score (1-100): 80 – For a free game it doesn’t get any better than this, assuming you like RPGs. The game features quality music and storyline in a typical Final Fantasy setting. There’s no third-party advertising in the game.  And as I mentioned, I don’t feel like this is a Pay to Win type game. Overall, the game is fun, but not without it’s flaws. Micro-transactions are always a drag, even when you know that the game’s revenue source is structured around it. It’s not perfect, but regardless, Brave Exvius gets high marks from me.