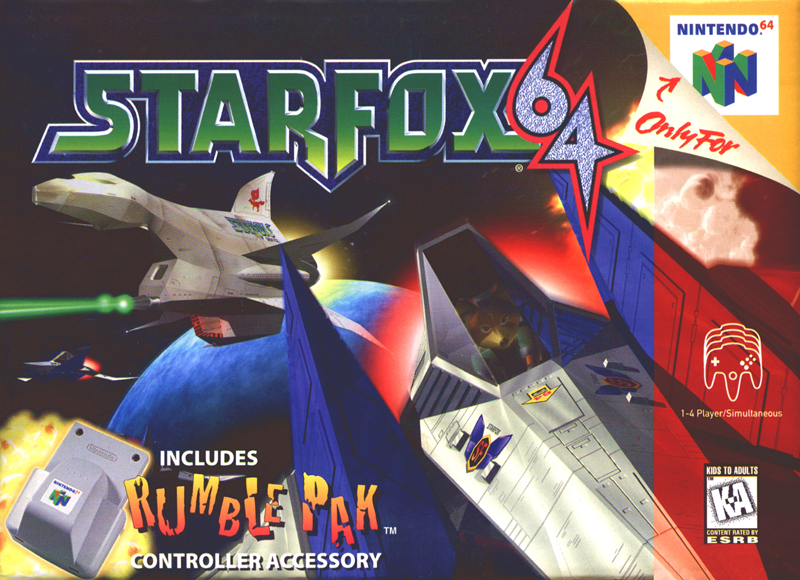 Today, I’m going share my thoughts on what is considered by many to be a classic title, Star Fox 64. Now, I want to start by identifying that, yes, this is technically the second Star Fox game released by Nintendo, and yes – I never reviewed the original. Why is that? Well, let’s take a moment to delve into that topic by talking for a second about the original Star Fox game.

“Star Fox” was a title released in 1993 on the Super Nintendo. It’s also considered to be a classic title by many for a number of reasons. First, it was very much a good game in it’s own right. But mostly, it is heralded as being one of the first games available on a home console to feature 3D polygon graphics. While the game looks crude by today’s standards, understand that in 1993, software- rendered 3D gaming was reserved for only the most high-end home PCs. Nintendo was able to bring this technology to the console by integrating a special “Super FX” graphics support chip onto the circuit board of the game.

This technology has proven to be somewhat difficult to emulate, which many gamers speculate is the reason that the original Star Fox has never been released as a virtual console title. The lack of an official VC release is also one of the main reasons I did not include Star Fox in my reviews of other SNES titles. The other reason being, that Star Fox 64 is essentially an updated version of the original game.

So, fast forward five years to the age of the Nintendo 64. By this time, 3D graphics had matured considerably. So, Nintendo decided to release a new version of Star Fox, called simply “Star Fox 64“. The storyline of this game is essentially the same as the original, but Nintendo also incorporated a few ideas from the ill-fated and unreleased “Star Fox 2“. The result was a game that has gone down in history as being a fan favorite.

Star Fox 64 is basically an on-rails space shooter. The storyline takes place in a far-away solar system: Lylat. Before the events of the game itself, an evil scientist known as Andross was banished to a barren planet where he had long been forgotten. Recently, strange activity has been detected on that planet. A team was sent to the planet to investigate, but they met a terrible fate, from which only one member escaped.

This game follows the story of a second unit deployed to the mysterious planet known as “Venom”. The hero is Fox McCloud, a literal walking/talking fox.  In fact, all of the characters in the game are anthropomorphic animals. But in truth, you rarely see them since the game is played mostly from either the perspective of a cockpit, or from a third-person camera view.

Essentially, the game works like this: you pilot what is known as an “Arwing” spacecraft through either planetary atmospheres or through various outer-space environments. The flight is very much “on-rails” for the most part, but you are able to weave in and out of various obstacles as you navigate your way through the level. Typically, the end of each stage is met with a boss encounter of some sort. These battles allow you a little more freedom when it comes to range of motion. In-level encounters are the same each time you play, so learning where and when enemies appear is a large part of the game’s strategy.  That being said, even though both the starting and ending levels are always the same, there’s a number of paths that players can take on their journey through the game. So, it’s very possible to play this title more than once and have a few different experiences.

That brings me to another important note. By default, this game has no save-file. Therefore, there is technically no way to save your progress. The game was intended to be played from beginning to end in one single session. However, modern players can certainly create restore points using the Wii. It’s also worth nothing that there is a modern port of the game (Star Fox 64 3D – for the 3DS) that does have a native save function.

Finally, it’s also worth mentioning that the N64 version does also feature local multiplayer of up to 4 players (screen sharing), while the new 3DS version support wireless local multiplayer.

All in all, Star Fox 64 is a fun little title. It’s a great casual game, even if it is a little simplistic at times.

Difficulty: Easy –  Overall, I would say that this game is fairly simple from start to finish. There are some optional challenges for players that want something more than a simple walk in the park. The biggest challenge for most new players would be to master the controls, but the game offers a very good tutorial just for this purpose.

Story: The story here is pretty simplistic, but it’s very well done. The planets are interesting and the characters are colorful and fun. This game is mostly a fun-filled romp, so if you’re looking for depth of story, or a deep-thinking space drama –  this may not be a title that appeals to you.

Originality: Space shooters had been seen as early as the Atari 2600 days, but despite being based on an aging idea, Nintendo did a pretty good job of making the first Star Fox feel original. Now, since this review is really for Star Fox 64, the same still applies. Even though this title is a remake of the original game, it still manages to come off feeling pretty fresh. Maybe it was the improved  graphics, maybe it was some of the new levels, I don’t know. But it worked.

Soundtrack: The music here is a mixed bag. The tunes are fitting, but they do seem a tad weak. The in-game music has a playful military feel to it, but lacks the “epicness” one might expect from a space-based game. The title features some basic voice acting. This comes off a little silly – but then again, how serious does a talking monkey in a spacesuit need to sound?

Fun: As long as you take this game for what it is, it’s a pretty fun title. Star Fox 64 is a game that was designed to provide some simple entertainment, and if you can manage not to take it too seriously, it does just that.

Graphics: The N64 version of the game looks great. Even today, it still holds up fairly well. Needless to say, it was worlds above the original Star Fox at the time it was released. The modern 3DS version actually suffers in some ways when compared to the original. It’s a bit more jagged looking, but the 3D effect really makes up for it.


Playcontrol: If playing the original N64 version (as opposed to the 3DS version), the real N64 controller is probably the way to go. But since most players will be playing this on the Wii, the Classic Controller is required. The game plays fairly well on the Classic, but I must admit, the original hardware does provide a superior experience. The 3DS version feels pretty natural, but after a while, you’re likely to end up with a mean hand cramp.


Value:  The virtual console version of the game is available for a reasonable price. However, players looking for the 3DS version may have to shop pretty hard. New copies of the game can be hard to find, and usually go for an inflated price.

Overall score (1-100): 80 – Star Fox 64 is a good family game that really belongs on the shelf of any Nintendo fan. Sometimes, in the days of epic time-consuming games, it is nice to have a simple title that you can pop in and enjoy without having to invest too much thought into. Star Fox 64 does a fine job of being just that.