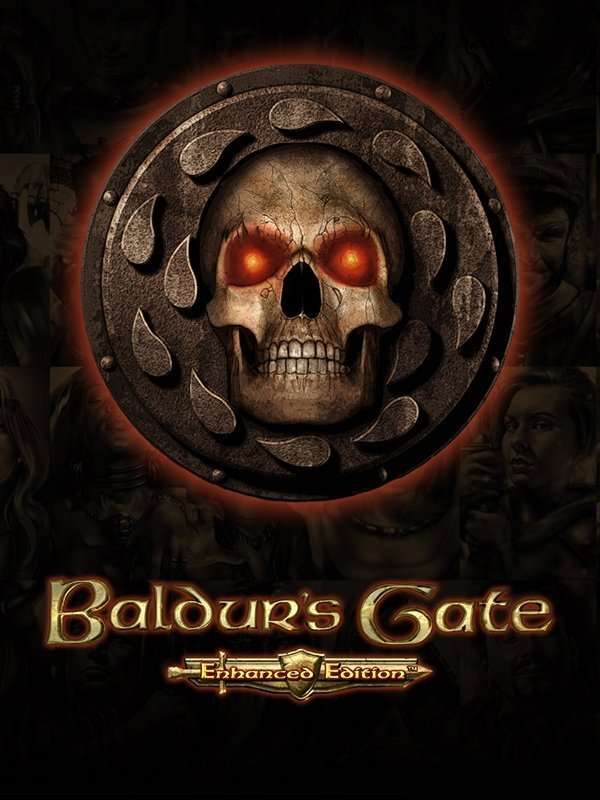 Getting back to my late 90’s game reviews, I step away from the PS and N64 consoles for a moment to talk about a classic PC title. Baldur’s Gate is almost universally regarded as one of the greatest western RPGs of all time. Originally released in 1998, Baldur’s Gate is a birds-eye-view role playing game based on Dungeons & Dragons 2nd Edition rules. The game takes place in the ever popular Forgotten Realms campaign setting and takes on the mammoth task of incorporating as many aspect of the D&D ruleset as possible and applying them to a real-time video game setting.

The original Baldur’s Gate proved to be extremely popular with fans. A year after it’s release, an expansion, Tales of the Sword Coast was made available. This add-on integrates seamlessly into the main game, adding new areas to explore, quests and storyline. The legacy left behind by Baldur’s Gate was so great that it was inevitable that someone would one day want to resurrect it. This occurred in 2012 when Beamdog Studios announced Baldur’s Gate Enhanced Edition.

I owned both the original game and the Tales of the Sword Coast expansion, but admittedly never completed them. Recently, I saw the Enhanced Edition on sale and decided there was no better time to revisit this classic. 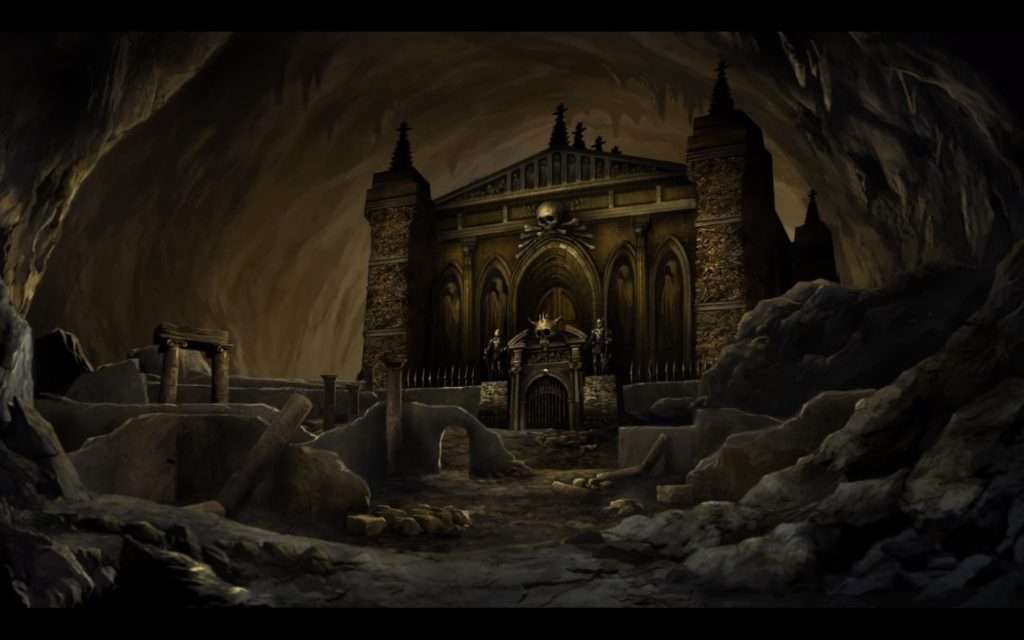 For the record, let me state that for the most part – the Enhanced Edition is a faithful remake of the original Baldur’s Gate. It features the original story, original score and voice acting, but many of the textures and graphics are replaced or highly modernized.  One thing I noticed right away, is that the original opening video has been replaced with hand-painted still images. I’m not sure why the new developers chose to do this. Granted, the original video is very dated by today’s standards. But why replace it with still images and not a new video? Regardless, the new into movie is fitting and  admittedly beautiful. Plus, it doesn’t detract from the experience at all in my opinion. Also important to mention; the new version includes both the original game and its expansion, out of the box. It also features a new arena-based add-on called The Black Pits. (More on this later). As far as additional content, the remake adds a handful of new playable NPCs and a few additional quests that provide backstories to these characters.

In Baldur’s Gate, the player creates a hero from scratch. Character creation follows standard AD&D 2nd edition rules.  Players can choose to create a character of any of the following races:  Human, Elf, Half-Elf. Gnome, Halfling, Dwarf, and Half-Orc. (The Half-Orc is a new addition to the original game). The following classes are available to players: Fighter, Paladin, Ranger, Cleric, Druid, Monk, Mage, Illusionist, Sorcerer, Thief, Bard, and Shaman. These classes can be specialized even further using “class kits”. (Barbarian, Wild Mage, etc). Just like in real D&D2E, players also have the option to dual-class and multiclass.

The game story revolves around your custom character. In a nutshell, you are the foster child of a wise sage named Gorion. The two of you live in a quiet sanctuary of Candlekeep, a place best known as a center of learning and home to one of the best libraries in the realm. One day, a frantic Gorion requests you to pack your belongs and purchase supplies for an impromptu journey. The game begins here, amidst the confusion of his sudden request. As you make your way through town, you encounter more than one nefarious character that seem to be hell-bent on seeing you dead. Eventually, as the game presses on, Gorion meets a terrible fate that leaves you alone in the wilderness, confused, and with little go on besides a handful of cryptic clues and request from Gorion to meet some trusted friends at a nearby tavern. You are hunted and alone, with no real explanation.

From this point forward, the entire game is open-ended and you can do as you please. You can elect to follow the path you were set on, or you can explore as you see fit. Throughout your journey, you will encounter characters that wish to join you on your quest. Each have their own motives and values. As you travel together, your actions will either enhance the bond you have with your companions or drive them away. 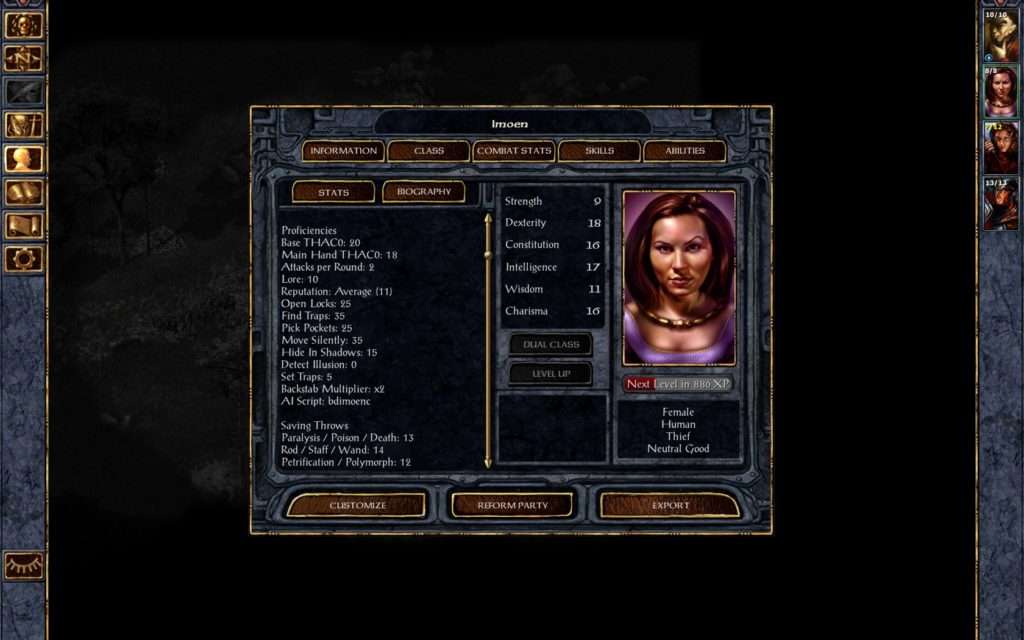 Baldur’s Gate is played from a birds-eye-view. You click on objects or points of interest to interact with them. To move, you click on the characters you wish to advance, then click on their destination and they will walk to it. Clicking on individual character portraits provides with some additional options. For example, let’s say you click on a door to open it, only to find the door is locked. Well, if you have a thief in your party, you can click on that character to bring up a list of skills, then click on Pick Locks, finally you can click on the door again to apply that skill. The same is true for combat. During the melee action, you can choose individual actions for each character. This includes simple physical attacks, using items, casting spells, etc.

All of this may seem like a lot to take in, and to be honest, the game is very daunting at first. My first experience with Baldur’s Gate was back in ’98 when it was first released. At the time, I was admittedly overwhelmed. I suppose I played about a quarter of the way through it before shelving it. Now, playing through the Enhanced Edition many  years later, I find that had I stuck with just a bit longer, it would have started to fall into place. A little patience and a quick read through the manual help tremendously. Plus, the new edition of the game also comes with a tutorial mode. (Which I highly recommend for new players).

Interestingly enough, there is a multiplayer option. But in reality, it is rarely used. In multiplayer, one person is the host. This means they control the lead character. Any additional players control party-member characters. The sheer length of the game makes it difficult for this type of multiplayer to be viable option.

Finally, I want to mention the additional scenarios. Included for free with the Enhanced Edition is a short, arena-combat prologue to the game called The Black Pits. This scenario is aimed a veterans to the game and features a party of characters that fight battle after battle in a gladiator-type setting. With each victory they earn riches that can be used in-between fights to purchase new armor and weapons. Each battles get progressively more difficult. The final few battles require some serious preparation and commitment. In truth, this whole add-on seems to serve as nothing more than an introduction for one the new NPCs add to the Enhanced Edition. But it is included free, so no complaints there.

This new version of the game does also offer a brand new paid-DLC scenario called Siege of Dragonspear. This chapter serves as a bridge between the events of Baldur’s Gate and Baldur’s Gate II. However, due to the sheer size of this expansion – I have decided to review it separately. 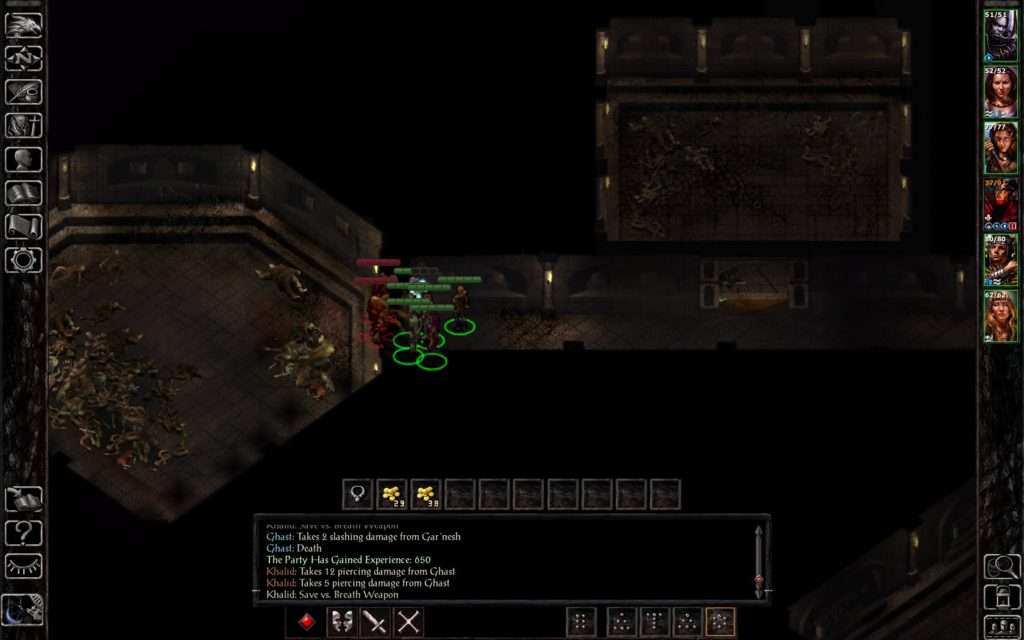 Difficulty: Variable–  Baldur’s Gate features a number of options when it comes to difficulty.  Easy, Normal, Core Rules, Hard, and Insane. The Enhanced Edition also adds options for “Story Mode” and Legacy of Bhaal”. The latter options making you either invincible or cranking up the difficulty to a point that makes the game nearly impossible.  (I gloat in being able to claim I completed the game on Bhaal difficulty…   not that I’m bragging or anything.)

Story: As one might expect with a Dungeons & Dragons title, the storyline is everything here. The game features a massive, rich main storyline. Not to mention it is peppered with a number of sideplots and quests. All of these are very well done.

Originality: Baldur’s Gate was a breath of life into what was a fading genre in the late 90’s. It was fresh and new upon it’s original release. Now, with the new edition, it still manages to feel new by taking an old classic, polishing it up and releasing it into a sea of games that began to grow stagnant with unoriginal ideas. It’s the new black, as they say.

Soundtrack: The music in the game is well done. It has a classic western RPG feel to it. Sadly, there’s not much diversity in it. The voice acting is also a mixed bag. Some of the characters are very well done, while others just sound silly and out of place. The voice acting for the new characters added to the game also don’t seem to fit in well with the original cast. Also worthy of mentioning, this game suffers a bit from when I call Repetitive Sound Syndrome. Simply giving orders to your character usually results in some type of feedback statement. Usually it’s one of three, and you get tired of hearing them really quick. Thankfully, there is a setting that allows you to control the frequency at which you hear these. Finally, this game seems to have an issue with volume management. Often times during the game, NPC will be speaking only to be drowned out by a swelling background score. Adjusting individual volume levels did not seem to help alleviate the problem.

Fun: If you’re a fan of CRPGS and/or Dungeons & Dragons, you’re going to have a blast with this game. However, many players many simply not have the patience for the old-school style found here.

Graphics: At time it was released, Baldur’s Gate was top of the line. Today, even though a lot of work was put into modernizing the Enhanced Edition it looks quite dated. Yes, the new textures are beautiful, but the character sprites suffer a bit.


Playcontrol: Here we come to my biggest gripe. While most point-and-click games are pretty simple to control, Baldur’s Gate suffers from terrible AI. It is not uncommon for NPCs to get stuck on terrain, walk the wrong way, etc. I also frequently struggled with being unable to enter buildings due to all of my characters crowding around the entry way. Also, the new edition  of the game is not without it’s share of bugs that can interfere with your progress.

Downloadable Content: A paid DLC Scenario called Siege of Dragonspear is available for purchase. This is a completely new original adventure available for the Enhanced Edition only. This currently sells for $20, so it’s a little on the steep side, but it claims to provide about thirty hours of content. So, that’s not really a bad price. I plan to make a separate review of it in the coming days.


Value:  This game currently sells for $20. Considering the amount of content packed into the title, it’s a steal at that price.

Overall score (1-100): 80 – Baldur’s Gate Enhanced Edition is a must-have for fans of the fantasy genre. It’s a classic game packed with tons of content. Even with some of the glitches and faults of the remake, the redeeming qualities of the game outshine any faults it might have. For some of the reasons outlined above, I can’t claim to give it a perfect score, but it comes damn close.