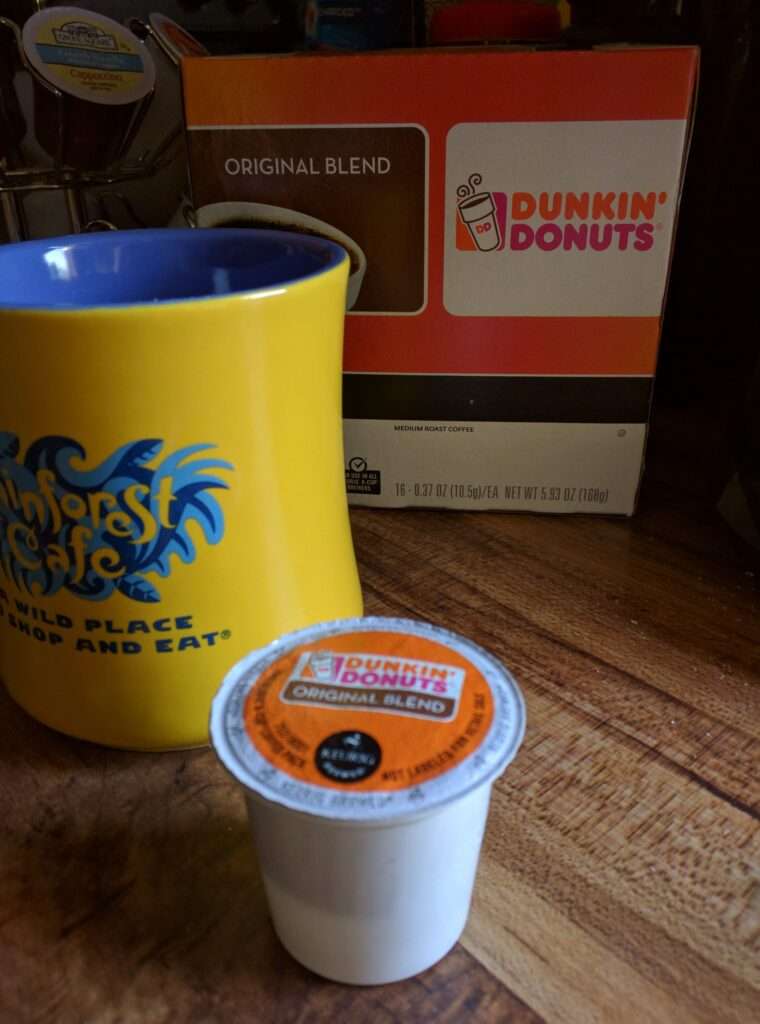 I’ve been away for a week on vacation, but I’m back with another “Nerd Fuel” post. So far in this series, I’ve rambled on about Donut Shop style coffees on more than one occasion. I’ve reviewed Donut Shop and Donut House – both of which are knock-offs of Dunkin Donuts classic original coffee. So… why not take a moment to check out the real thing? Well, I drove down to my local Dunkin Donuts store and bought a box of their Original Blend coffee to see what all the fuss was about.

I have to admit, while I love Dunkin Donuts, I’ve only ever really had their donuts. I’ve never bothered with their coffee. Until recent years, I’ve always enjoyed iced coffees or flavored cappuccinos more than a simple pot of brewed coffee. But despite never being a consumer of their brew, I’ve been well aware of the reputation it carries. After falling in love with the “Donut Shop” K-Cups, I was eager to try to real deal.

So what’s the verdict? Well, it’s very similar to “Donut Shop”. In fact, it’s almost identical. Assuming the Donut Shop people were trying to make a clone of Dunkin Donuts Original Blend, they have come really close. However, I did detect some subtle differences. Dunkin Donuts seems to be a little lighter, not quite as rich. Some people will no doubt prefer this. Personally, for me, Donut Shop still has an edge when it comes to flavor. At this time, it’s still my favorite everyday coffee. But, as I mentioned, this is largely going to be a matter of personal preference. Both coffees are great general purpose blends. The Dunkin Donuts does sell for about a dollar more per box. So, that alone may be the deciding factor for many. All in all, considering this is the original that everyone tries to imitate – Dunkin Donuts is certainly doing something right. Despite my preference for Donut Shop, this coffee ranks right up there with it.

Would Buy Again?:  Maybe. This is a solid cup of coffee. But, I do prefer the Donut Shop brand to this. Donut Shop first – then this if I can’t find any.