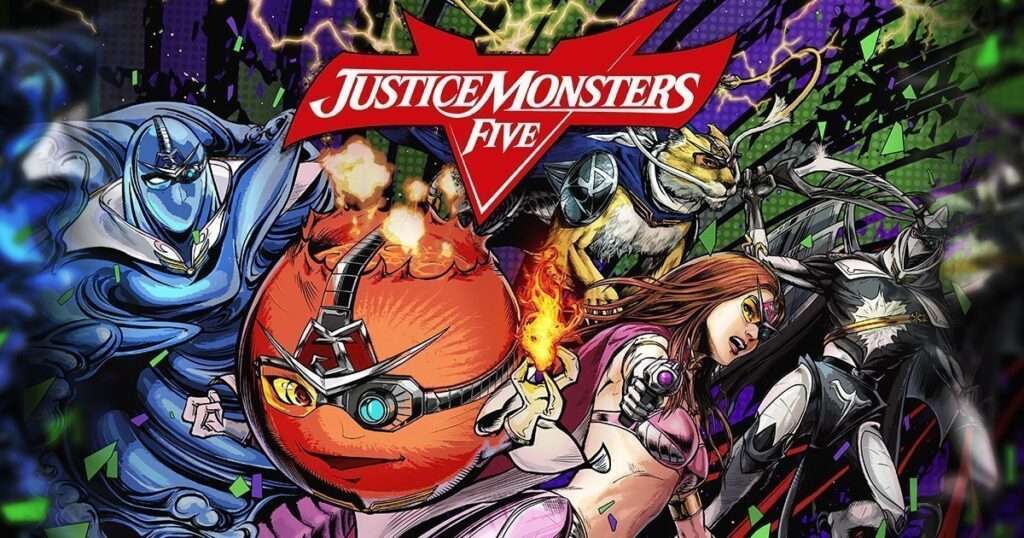 The countdown to the Final Fantasy XV release moves forward. We are now just under two weeks away from the release of this much awaited title. In the meantime, we’re going to celebrate by reviewing another tie-in to this much anticipated game; Justice Monsters Five.

So what is Justice Monsters Five exactly? Well, the answer is simple. “Justice Monsters Five” is a pinball game that exists within the universe of Final Fantasy XV. It is hinted in the promotional materials for XV, that it is played by some of the heroes in that game. So, expanding on the hype that is Final Fantasy XV, Square Enix decided to release a playable version of the pinball game to the public.

The premise behind Justice Monsters Five is simple, essentially, you are presented with a number of pinball-like challenges. Inside the table exist bumpers, obstructions and… monsters! To complete the table, you launch balls (represented by various collectible GOOD monsters) at the BAD monsters on the table. Striking a bad monster with a good monster-ball will result in damage. Once all of the bad monsters on the table are defeated, you proceed to the next stage. Eventually, each level will end with a final “boss table”. Upon defeating the boss, you have cleared the course. At the end of each course, your performance is tallied. Depending on your final score, you may earn various rewards. This includes gold, materials for enhancing your monsters, and Gold Eggs. 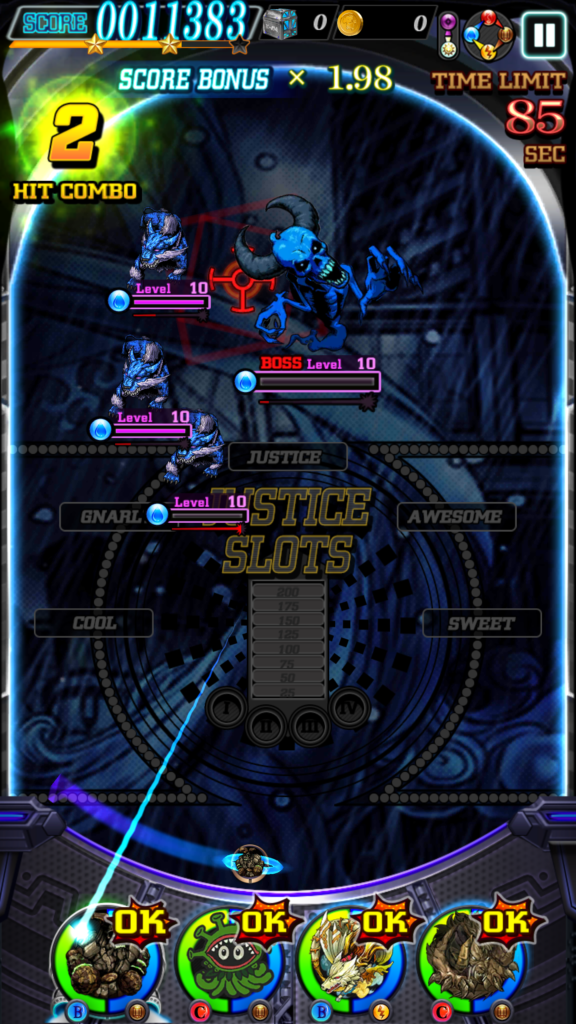 Gold Eggs are redeemed for “Monster Spins”. Spins are how you obtain new monsters for your ranks. Each spins will net you a new monster ranging from common to super-rare. As mentioned earlier, Gold Eggs can be won in-game, but they can also be purchased for real money.

Once you have a full roster of monsters, you can continue to train and improve them, making them stronger. Learning how to enchance your monsters is the key to the game. As you progress through the game, either by doing the “Quest” tables or even the limited “Event” tables, you’ll be able to choose a difficulty level. Some of these harder levels are really only possible with a strong, enhanced monster. 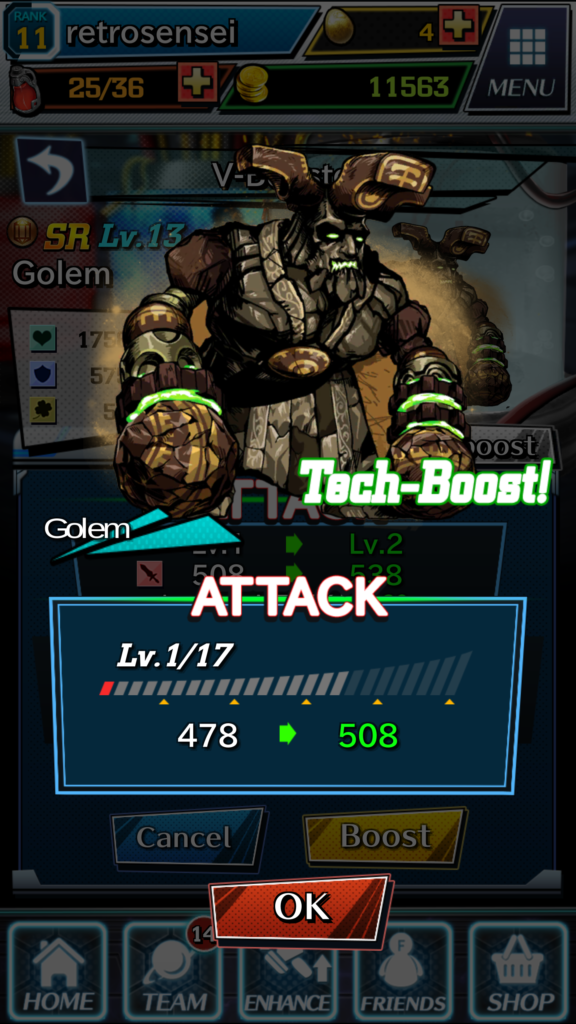 Justice Monsters Five is a quirky little game. It’s very different from many others, but also shows signs typical of other mobile titles. After playing for a while, you’ll find yourself stuck behind time walls and nudged to spend real money in order to progress faster. There are daily login rewards, and all the typical schemes one finds in this type of eco-system. But also, Justice Monsters Five seems to have a way of feeling quite casual when compared to other mobile games. Personally, I find it a great way to kill 10-15 minutes on any given day. Plus, it’s refreshing to see a title that doesn’t take itself very seriously.  I’m curious to see just how much of this game we actually will get to see within Final Fantasy XV itself. Time will well.

It’s important to point out, this game feels largely unoptimized. The game seems to hang and lag for no reason at all, even on top-of-the-line flagship phones. Despite being fun, Justice Monsters seems to be quite unpolished at times.

Worthy of note: even though this game has been out for a month of so now, players starting out are still subject to a special “pre-registration bonus”. This includes a number of free Golden Eggs. So, if you’re procrastinating, you’d better hurry. It’s unclear how long this will last. 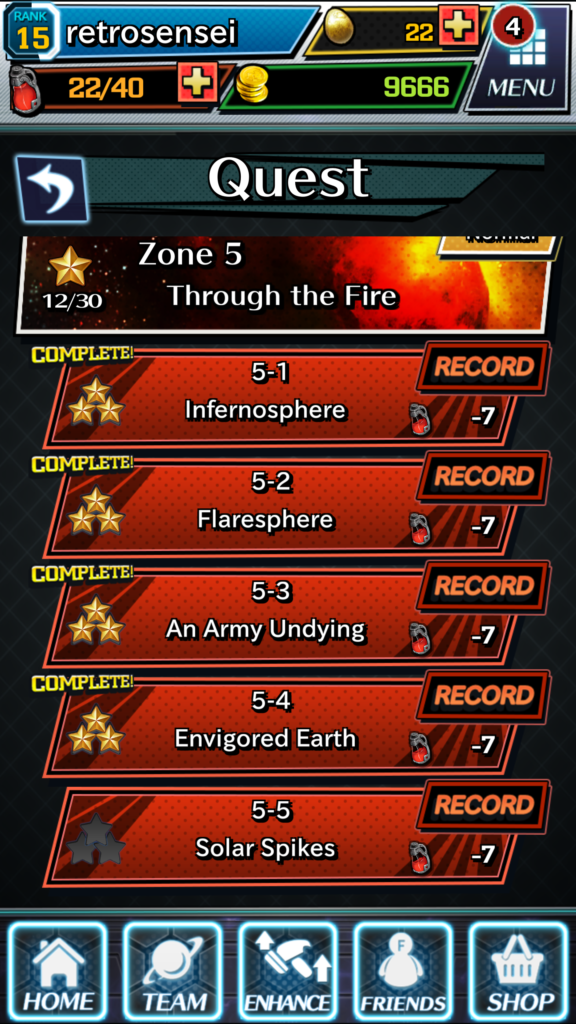 Difficulty: Medium –  Overall, many of the standard quest levels in the game are quite easy. One of the hardest parts about the title is learning exactly how to control the ball. At first, I found myself overthinking things. I was trying to flick the ball or point it in a certain direction. None of that is neccesary. Once you get a feel from how to control the ball, many of the basic challange require little effort. However, as you progress, some of the Very Hard and “Wizard” tables can be pretty brutal. But generally speaking, it’s a fairly middle of the road game in terms of challenge.

Story: Despite being a “game-within-a-game”, Justice Monsters Five actually has a very basic storyline. It’s presented to you during the tutorial and serves as a very basic backdrop. But to be fair, this is not a very story driven game.

Originality: When this game was announced, I was honestly expecting a traditional “ball and flipper” type of pinball experience. But instead, SE has done a really nice job of presenting us with a a very original, pinball-like experience. The game was not what I was expecting at all, and I was pleasently surprised.

Soundtrack: The music in this game is loud, heroic, and fast-paced. At times it come off as a little busy and hyper-sounding. But it works well. It’s best described as a mix between techno, metal and chaos.

Fun: I personally enjoy this game a lot more than I probably should. I don’t play it every day, but when I’m bored or looking to kill some time, it seems to be a pretty good way to unwind.

Graphics: The tables and background graphics are very well done. The monsters have a silly cartoonish vibe to them. But all in all, this is a beautifully rendered mobile game.


Playcontrol: The controls for the game take a little getting used to. Be sure to reach the instructions and play the tutorial. Once you have a grasp on how the controls actually work, there’s no real issues here.

Downloadable Content: YES– In-game currency can be purchased with real money. The game receives regular free updates and features special limited time events. – Buyer beware! In the few short months since SE introduced this title they’ve switched backup routines for the game data three times. Players who were not diligent in renewing their data backups can easily find all their progress and real money purchases lost when restoring their device or changing phones.

Overall score (1-100): 55 – A silly, fast-paced, pinball game with a Final Fantasy theme. Not to mention one that integrates into a larger universe. Its like a mini-game for your phone. I enjoy it way more than I probably should. – However, performance and flaky account issues can make this hard to recommend.