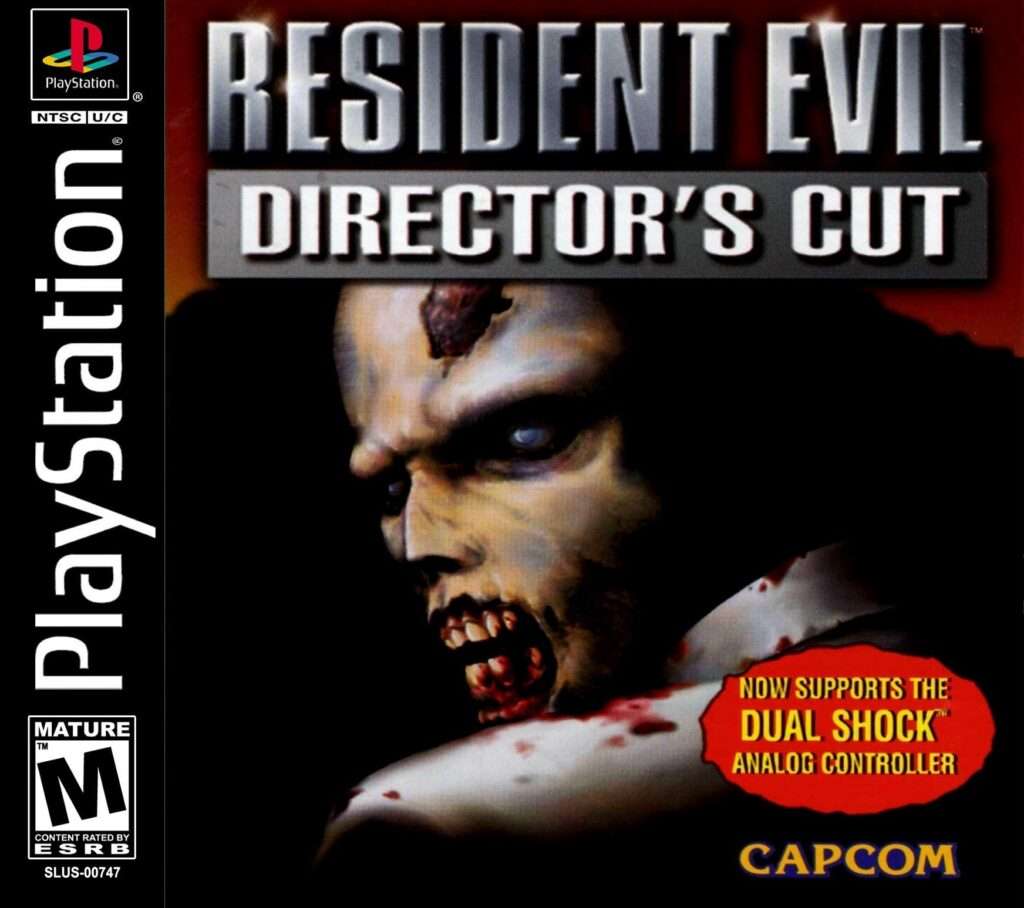 As you may know, tackling my backlog is the main reason I started this site. Well, with that in mind I continue to proceed with both my PS1 era playthroughs and my creepy Autumn game initiative, with a review of the Playstation classic: Resident Evil. This is a title that is heralded among gamers as one of the greatest survival horror titles of all time. Without a doubt, this is the game that really launched the genre into the mainstream.

My very first experience with Resident Evil was the enhanced remake of this game back on the Nintendo Gamecube, but for this review I wanted to go back to the roots of the series. So I chose to play through the Director’s Cut edition of game. That being stated, let’s go ahead and take a moment to clear up any confusion regarding the different retail versions of Resident Evil that exist.

First, there is the original release: This is the game in it’s purist form. But that doesn’t mean it’s the best… The original US version of Resident Evil came under heavy criticism due to censorship. For whatever reason, Capcom decided to cut a number of scenes from the game. These missing visuals include references to smoking and also some of the more violent imagery. However, despite these cuts, the game still received a Mature rating. So, to me and many others, the decision to censor the game made little sense in the end.

Second, we have the The Director’s Cut. Originally, this release was marketed as being the uncensored version of the game. But, it was later found to contain the same edits as the vanilla release (apparently due to an error). This version of the game does feature a few enhancements to the playcontrol, as well as a new Beginner Mode and “Arranged Mode” (sort of a remix for item and monster placement). A second (corrected) version of the Director’s Cut was eventually released. This version also added controller vibration support. For many, this is considered to be definitive PlayStation version of the game – and this is the version I’m focusing on for this review.

Third, The remake: In 2002, a remake of the original game was released exclusively on the Nintendo GameCube. This was the first version of the game that I experienced. This version includes revamped graphics and sound, a higher degree of difficulty, and some other major and minor changes.  Recently, an enhanced HD version of the remake was released. I have decided to review this new version separately at a later time. So for now… on the the review. 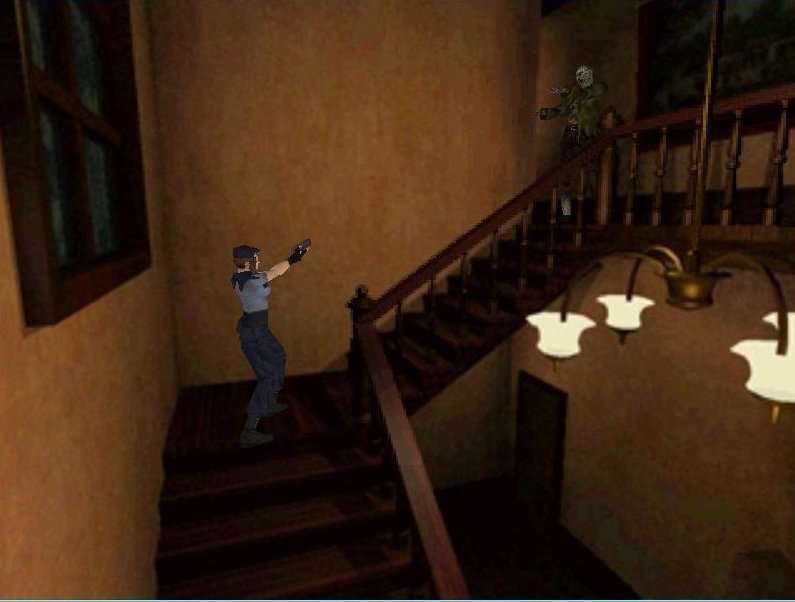 The story for Resident Evil takes place in the fictional locale of Raccoon City. Recently a number of bizarre murders have occurred on the outskirts of the area. To investigate, an elite group of police officers known as “STARS” were dispatched to the scene. When this group did not return, a second team was sent to assess the situation. The game begins with this second crew locating the crashed helicopter of the original team. While investigating the crash, the STARS are attacked by a pack of enraged, monstrous dogs. Unable to combat them effectively, the STARS officers run to a nearby mansion for shelter. Inevitably, the team gets split up in the chaos. The goal of the game is locate your missing companion(s) and explore the mansion for clues regarding the whereabouts of the former STARS team members. As the player, you can choose to control either STARS’ member Jill Valentine or Chris Redfield. Each character has their own set pros and cons, and the flow of the story will change slightly depending on which you choose. Regardless of your selection, the overall plot is the same.

It doesn’t take long for the hero to realize that things at the mansion and surrounding area are far from normal. The place is crawling with zombies! As you continue to play and explore, the story-line that unfolds is one of classic B-movie horror.

The basic premise of the game is to explore the mansion and locate your fellow STARs members and then escape. Initially, a large part of the mansion is closed off, but as you continue to explore you will obtain keys and other items of interest. These items enable you to continually probe deeper and deeper into the mysteries that lie before you. 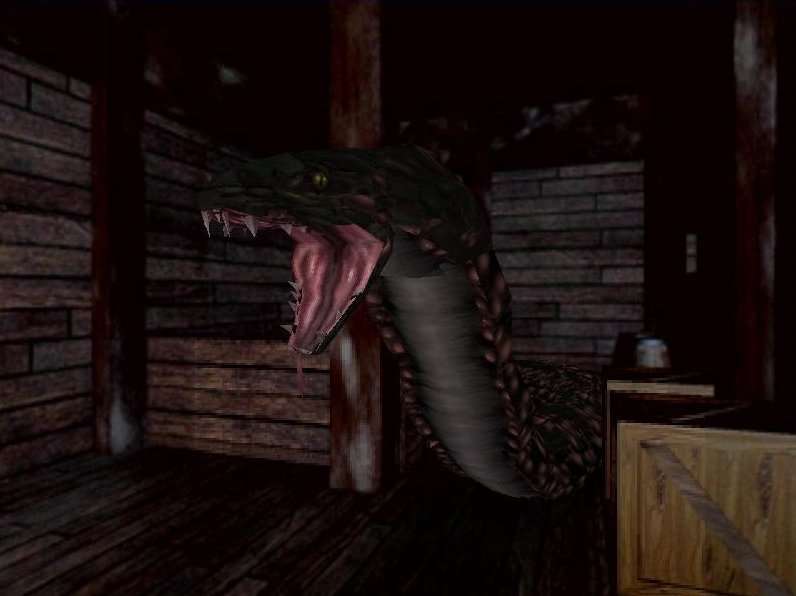 As each new area is unlocked, every step into the unknown is wrought with danger. As you play, you’ll soon realize that the comfort of trekking through familiar territory is quickly replaced with dread each time you set foot into a new unexplored wing of the mansion. You never know what type of horror may be lurking around the corner. To make matters worse, weapons and ammunition are a scarce and valuable commodity.  This is made even more so by a very limited inventory space. Your character can only hold so many items. So often, you will find yourself stumbling upon something of value, with no way to hold it. Luckily, there are special storage boxes located at various locales in the game. These can be used to store your valuables and free up precious inventory slots.

Resident Evil does a masterful job of keeping the tension at a fever pitch. Everything from the creepy atmospheres, to the music, to the gruesome monsters is masterfully crafted. The game does lack in a few crucial areas however. The first, being the play control. This game controls very similarly to many of the early third-person 3D games of the era, which I’ve always found to be somewhat problematic. Your character moves in a tank-like fashion. You point them in a specific direction and then move them forward. This makes for some rather stiff and clunky navigation. Combine this with turning the corner into a room full of zombies and it can make for a easy death – simply due to the difficulty of trying to navigate away from danger. As I mentioned, other games of the time had the same control scheme (Tomb Raider, Silent Hill, etc). Second, the voice acting is simply horrid. I mean, it’s REALLY bad. But I’m able to overlook it by imagining the whole thing is a spoof of a terrible B-movie. (Sadly, I don’t think that was the actual intention of the developers.) Finally, the whole inventory system is overly cumbersome. I understand how space-management can be an important aspect for some games, but in the case of Resident Evil, I feel it’s largely unnecessary.  For example, to even save your game you are required to keep “Ink Ribbons”. These are a consumable item that can be used at typewriters you may find scattered around. Using a ribbon in a typewriter will allow you to save your progress. So yes… you can technically blow all of your saves by running out of ribbons and find yourself in a heap of trouble late in the game. 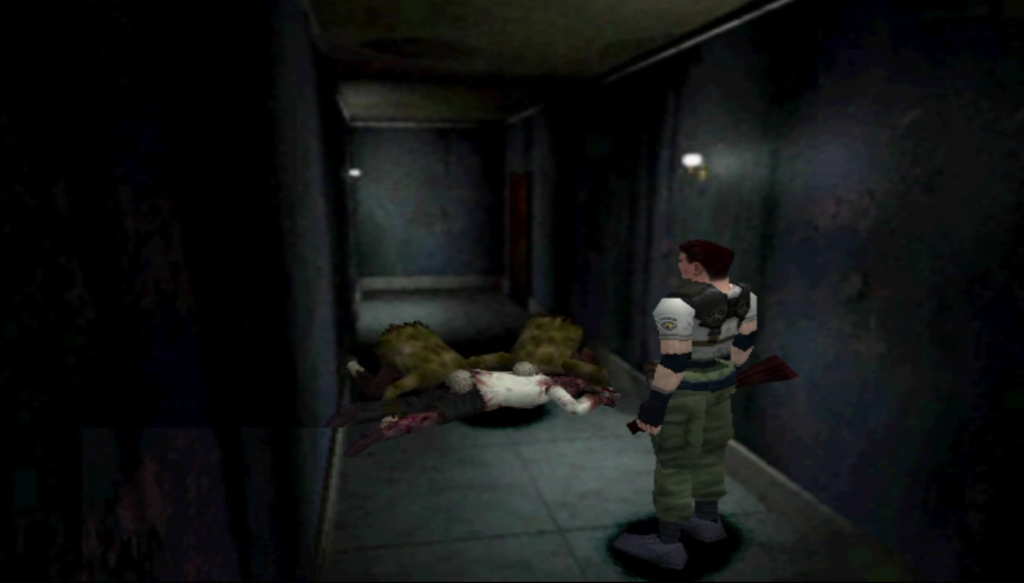 Despite these annoyances, the game is a masterpiece. It’s certainly worthy of the hype it receives. On top of the excellent storytelling and tension that you get from the game itself. Having two characters to choose from adds a good level of replay-ability to the game. While the background story for both Jill and Chris are the same, each characters sees the scenario unfold differently. Plus, there are differences when it comes to playing the two characters. For example, Chris is a bit tougher and can seem to take more of a beating. But Jill can hold more gear and is able to pick locks, this allows here access to more of the mansion right from the beginning. And if that’s not enough, the Arranged Mode featured in the Director’s Cut mixes things up even more, giving even veteran players a new experience.

All in all, I recommend Resident Evil for nearly anyone who loves retro gaming. For fans of the survival horror genre, this is a must-play. I know that the new HD Remake of the game is shiny and tempting, but there’s really something charming about the original PS1 version that is also deserving of your attention. 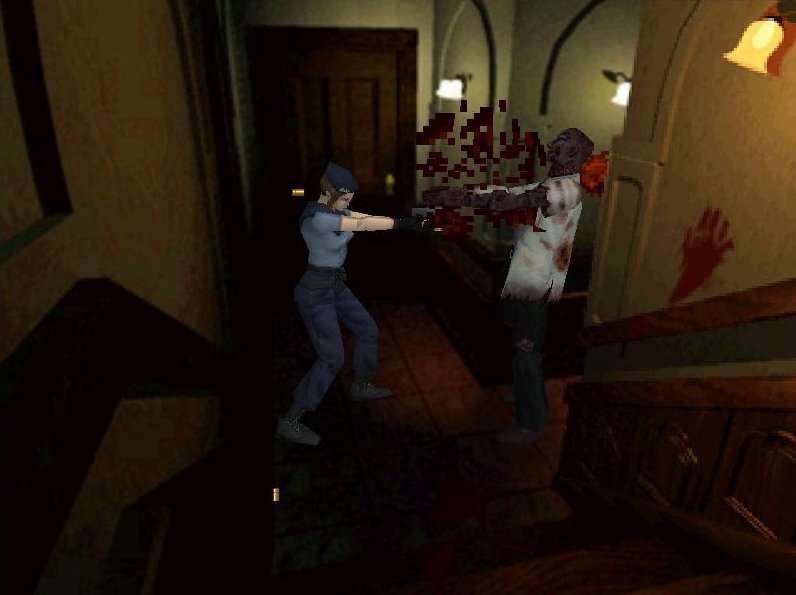 Difficulty: Variable –  The Director’s Cut version features three levels of difficulty: Beginner, Original and Arranged. The Beginner option reduces the difficulty of the game dramatically. Monsters are weaker, ammunition is more plentiful, and there seem to be fewer monsters overall. Original difficulty matches that of the game during its original release. Arranged is a bit of a different bag. Arranged Made changes the location of items and monsters, making the game completely different for players that already know their way around. – Generally speaking – I do recommend the Original mode of difficulty for most players. But gamers that simply want to enjoy the storyline may find Beginner mode more suited to their tastes.

Story: The story line behind Resident Evil is surprisingly complex. It’s starts out simple, but slowly builds as layer upon layer is uncovered by the player as they proceed through the game. Much of the plot reminds me of what you might find in a cheesy B-grade horror flick, which is fine by me. It works well here. I have not played any other games in the series yet, but I think it’s safe to assume that the plot will only expand in later games. I’m interested to see what’s to come.

Originality: For many, Resident Evil is the original survival horror title. It may not technically be the first in the genre, but it certainly paved the way. A lot of the game design elements seen in Resident Evil come from other games, but it’s combined here in a way and in an atmosphere that makes it all unique and memorable.

Soundtrack: This game features a very minimalist soundtrack, which works very well. Music is used to queue up tension, or in some cases even relief. (Anyone exploring the mansion who opens an unknown door – only to hear the “Storage Room Music” knows exactly what I mean.) Sadly, the game suffers from some pretty terrible voice acting.

Fun: Resident Evil is the perfect game for late Autumn nights. This is one to play in a quiet house with the lights off. I had a blast with this game. Admittedly, more than I expected to.

Graphics: The pixelated graphics and the low resolution FMV movies are very dated by today’s standards. But at the time of the release, they were considered very well done. Despite the dated look, Resident Evil still manages to capture the spooky atmosphere it needs to succeed.


Playcontrol: This is one of the weaker points for the game. The character in the game is controlled using the old, clunky “compass rose tank” style of movement. Players used to modern 360 degree movement will need some time to get adjusted. Overall the controls feel stiff and antiquated. But in the long run, they are manageable.


Value:  This game is available as a PS One Classic on the Playstation Network for $9.99. Even today, this price is well worth it.

Overall score (1-100): 90 – If you’re curious to see what the hype is all about, or if you’re interested in the seeing the origins of the survival horror genre, this is the game for you. In fact, as long as you’re not completely adverse to games that make the hair on the back of your neck stand up… I recommend Resident Evil to nearly anyone old enough to play it. It’s a real classic.

Daily reminder that your brain on Twitter is being hijacked by an algorithm designed to do one thing: maximise engagement. And the most efficient way to do that is through anger.