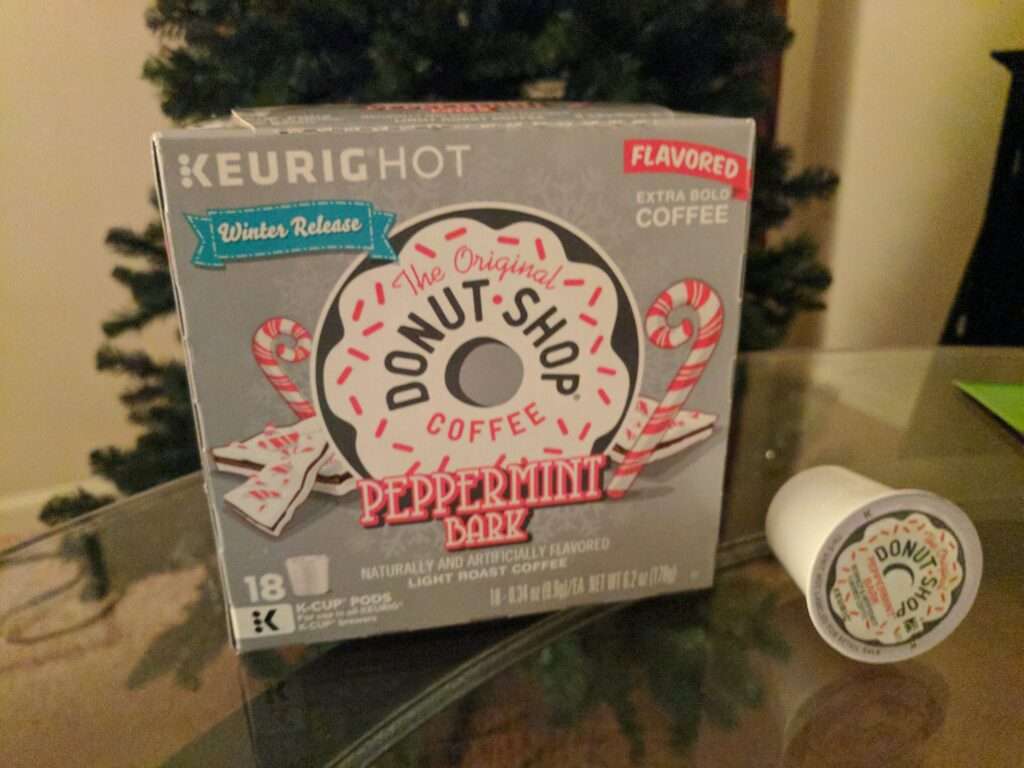 Merry Christmas! It’s here, Christmas 2016. I hope you got tons of games and nerdy goodies this year. Being a parent certainly puts Christmas in a different perspective. As a father of two boys, I still receive a gift or two over the holidays, but the focus shifts from enjoying your own gifts to watching the kids enjoy theirs. Naturally, kids are wound tighter than a steel drum on Christmas Eve so this can make for a late night, if you know what I mean. To get through it, I always rely on a strong cup of coffee.

This year my father came over to visit and brought over a box of Donut Shop – Peppermint Bark coffee. Now, I’m not a big peppermint guy. I like mint in my gum and occasionally in my chocoloate, but I’m in no way a fan of drinking mint.  I don’t like mint cocoa, minty chocolate milk, etc. It’s just not my thing. So I cringed at the thought of a peppermint bark-flavored coffee. But, I’ve been a fan of Donut Shop’s other offerings so I decided to drink it in the name of science!

The brewing process resulted in quite a strong minty-aroma. It was a pleasant smell, but I was certain this was going to result in a buzzfest of mint in my mouth. Surprisingly, it wasn’t as bad as I anticipated. The peppermint flavor is certainly there, but it’s not overpowering. Depiste the “Extra Bold” label, I found it to be somewhat mild and smooth. It works quite well with a sweetened creamer. I enjoyed his coffee hot, but I imagine it would be just as good, if not better as an iced coffee.

Personally, due to my personal preferences, this isn’t a coffee that I see myself buying. But, it certainly wasn’t bad at all. If you’re a fan of peppermint bark, or just mint in general, this might be exactly what you’re looking for. The peppermint flavor does give this coffee a bit of zing, but nothing too extreme. It actually works quite well on a winter night as an after dinner dessert coffee.

Would buy again?:   Maybe. This is a decent desert coffee, and it certainly has it’s place in the holiday lineup.  But I’d have to be in mood to drink this. It’s not an everyday cup. Peppermint lovers will really dig this though.