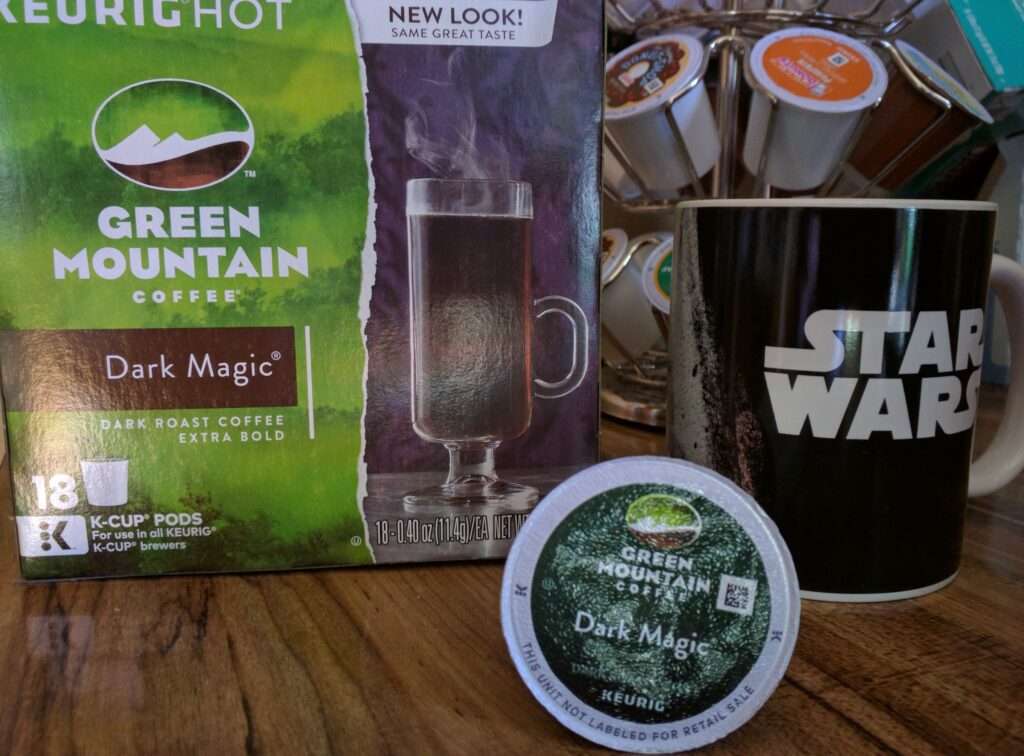 Last time we talked coffee, I shared my thoughts on Donut Shop Dark. Dark coffee blends are very popular among many coffee drinkers. The darker roast brings out flavors that you just don’t get with medium and light roast coffees. The thing about dark roast coffee if you either like it or you don’t. Personally, I find the taste pretty agreeable, but I prefer it in the morning as opposed to a late night cup.

When I reviewed the Donut Shop Dark, I found it to be very enjoyable. But I felt like there was probably a better dark roast K-Cup out there somewhere. So I began my search for an alternative. One of the first suggestions I came across was “Dark Magic” by Green Mountain. So, I picked up a box and gave it spin.

At first, during the brewing process I thought I had maybe put the wrong cup in the machine. It smelled EXACTLY like Donut Shop Dark while it was brewing. But that’s where the similarity stopped. My first sip of Dark Magic revealed it to be a very different coffee. While Donut Shop Dark tasted like regular Donut Shop coffee, with a darker roast – Dark Magic actually tastes a bit like… espresso! There’s bitter edge at first, followed by a very rich flavor blend. Oddly enough, the farther I get into my cup, the less bitterness I seem to detect. It’s a bit hard to describe. But it works well. Adding a sweetened cream brought out the flavor a little more and in some ways, reminded me a bit of the little Starbucks Double Shots they sell at convenience stores.

Dark Magic also seemed to give me a bit more of a jolt that I expected. More so than some other darker blends I’ve sampled over the years.

Would Buy Again?:  Maybe. So far, I’ve preferred the Donut Shop Dark over Green Mountain’s Dark Magic. But, I could settle on the Dark Magic in a pinch if I was really craving a dark roast.