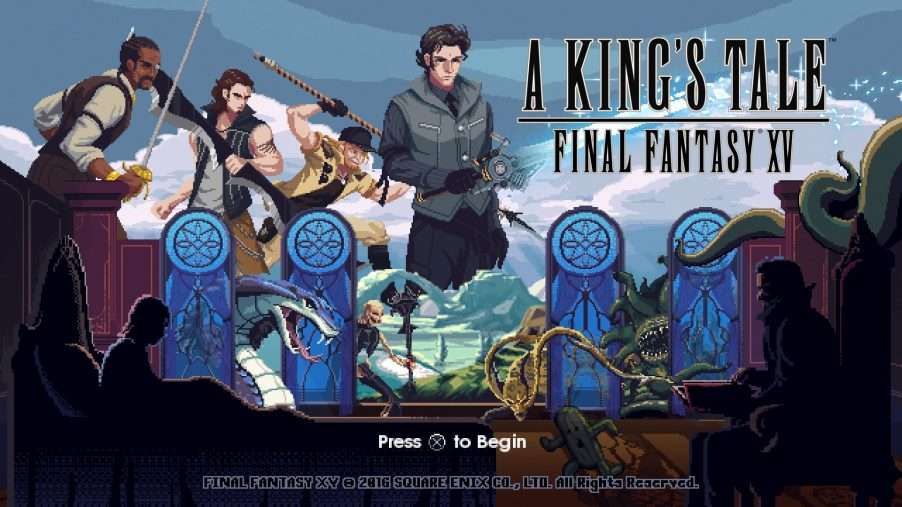 For those of you that pre-ordered your copy of Final Fantasy XV from Gamestop, you may have noticed a download code on your receipt for a bonus game. (If you didn’t notice this code, go fish your receipt out of the trash, quick! The code is for something called A King’s Tale. A King’s Tale is a mini, 16-bit style beat-em-up based on characters and monsters from Final Fantasy XV.  It’s a simple little game, and one that’s nothing at all like the actual Final Fantasy XV. But, for a price tag of $0.00,  you can’t beat it.

The premise of the title is simple, in A King’s Tale, Prince Noctis is still a child. One night his father, King Regis, tells him a fantastic bedtime story about an epic battle against legions of monsters. The “bedtime story” makes up the actual gameplay. Once you have completed the main story, Prince Noctis finally goes to sleep. This unlocks a slew of optional Dream Battles. 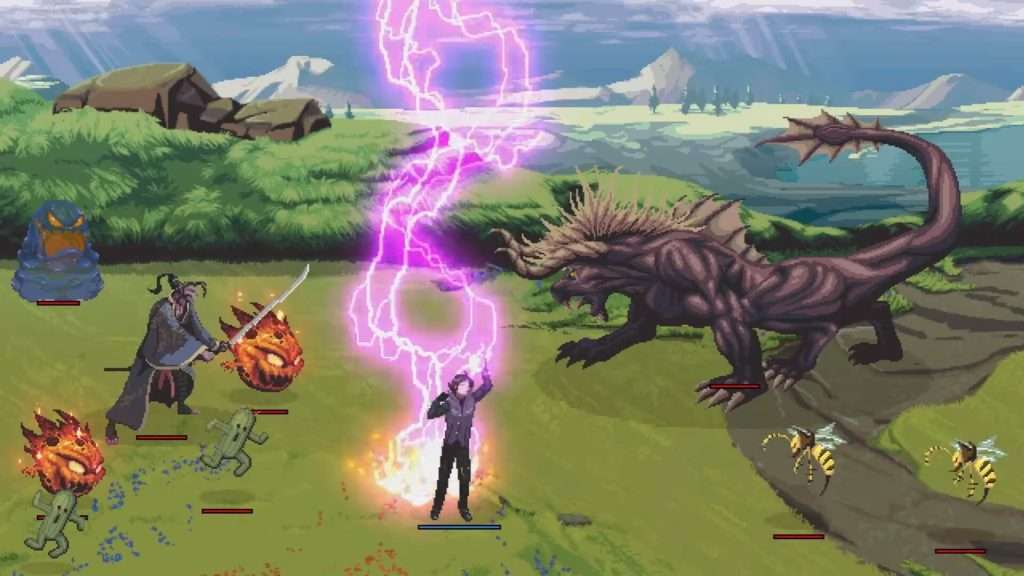 The gameplay is best described as an old arcade-style brawler. IE: Double Dragon. But much more fast paced. To start, King Regis only has limited abilities but as you continue to play and progress through the stages, more and more attack options become unlocked. As you play, you’ll find that certain monsters are weak to certain types of attacks. So you learn to tailor your strategy to match whatever you’re fighting. The tricky part is that you’re often attacked by multiple enemies at once, so you have to learn to switch up your assault on the fly.

Once you completed the main scenario, you unlock what are known as Dream Battles. These are short rounds of combat that also include an optional goal. To complete the battle properly (and earn a gold star), you need to achieve whatever the objective is – for example, complete the battle without using magic. 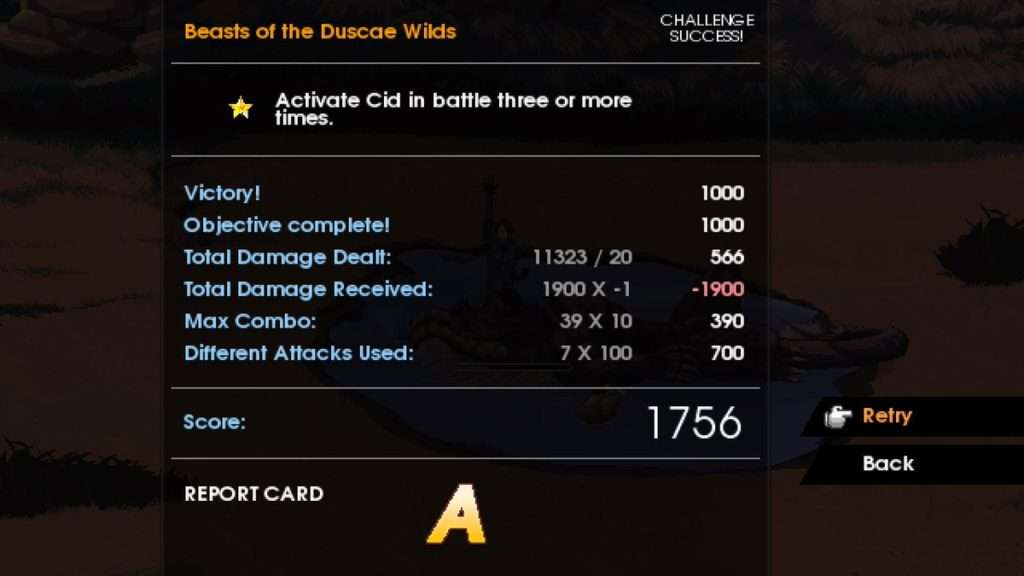 On the surface, A King’s Tale seems like a very simple little freebie. But, there’s actually a surprising amount of thought that’s gone into the game. The game comes complete with it’s own chiptune style soundtrack and even has achievements/trophies.

The worst thing about the game is that it is not available to the general public. Currently, only players that pre-ordered the game from specific retailers have access. I hope that after some time goes by, this decision is reversed.  Until that day arrives, if you’re one of the lucky bunch of players who can get your hands on A King’s Tale, it’s certainly worth a look. My only complaint about the title is a lack of multiplayer. This would be the perfect game for some co-op, even it was only local with a second controller. 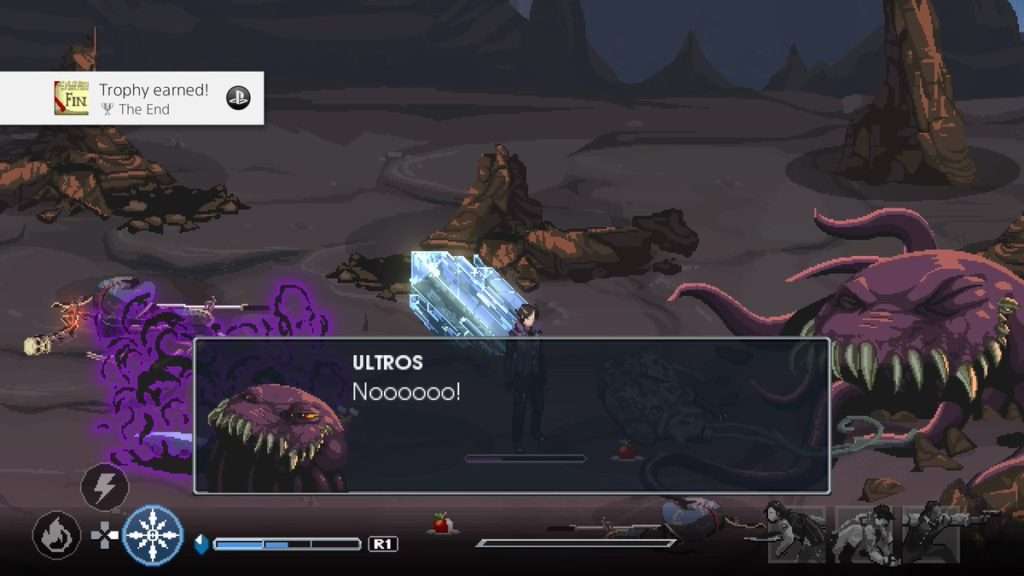 Difficulty: Hard –  Looking like a retro title isn’t the only thing “old school” about A King’s Tale. The game also has a “Nintendo-Hard” level of difficulty.  This is especially true for the final battle and several of the Dream Battles. Progress is saved from stage to stage, but occasionally, the battles themselves can get very frantic. Those who are easily frustrated or not familiar with this type of game may not find this to their liking.

Story: This game could loosely be considered a prequel to Final Fantasy XV, as it takes place when Noctis is a young boy. But, the storyline here is not critical to the XV universe at large. Regardless, it’s cute and does provide a bit of nice window-dressing to the already large FFXV universe.

Originality: Years ago, games like this were a dime a dozen, but it’s been a while since I’ve seen a title like this so it was quite a refreshing experience. I’ve certainly never played a Final Fantasy title in this genre.

Fun: I used to enjoy these games immensely when I was young.  So, I personally had a blast. But I can imagine that fans attracted to Final Fantasy titles as a whole may not appreciate this type of game. The difficulty level can also result in some frowns from younger players, I imagine.

Graphics: The graphics here are on par with a title you might find on the old SNES or in a retro arcade. Cartoonish, 16-bit sprites. But, the game is tweaked for modern consoles and looks great in HD.


Playcontrol: The controls are easy to grasp and very responsive. No real issues.


Value:  This title is provided for free as a preorder perk for Final Fantasy XV. It doesn’t get any better than free!

Overall score (1-100): 75 – For a free title, it’s difficult to be picky. I suppose my biggest complaint would be a lack of local multiplayer. The difficulty level may turn off some modern players, but just like any retro title; practice makes perfect.