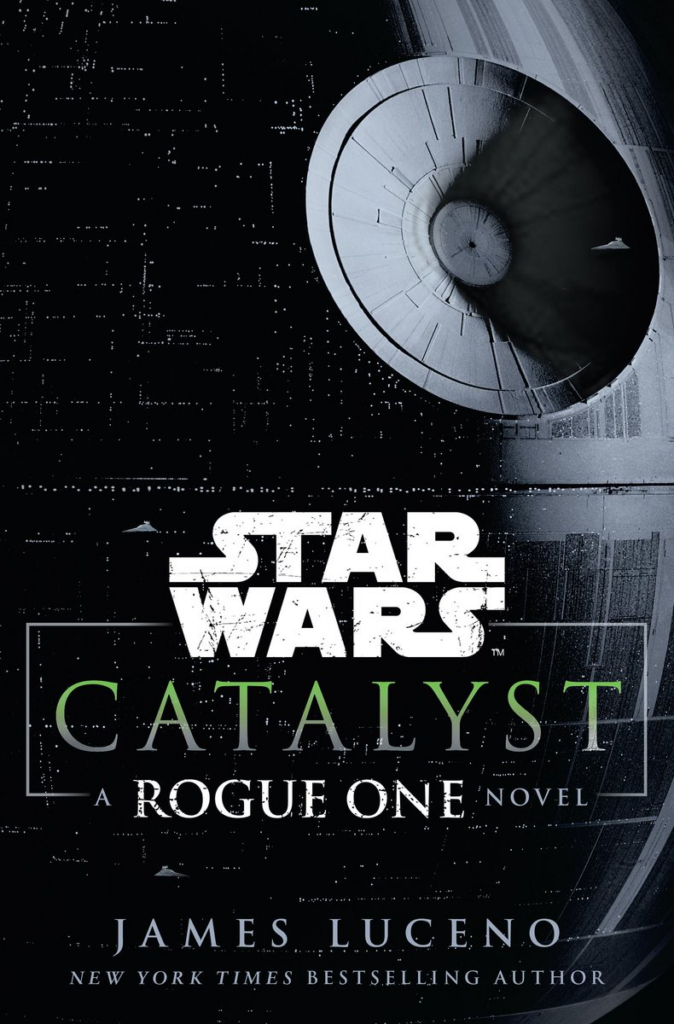 Rogue One is almost here! The first “sidestory” film in the Star Wars franchise hits theaters Thursday/Friday nationwide. This film will finally tell the official story of how the Rebel Alliance obtained the plans for the Death Star. Now, if you’re a long time Star Wars fan, you probably know that this story has been told several times before in various Expanded Universe stories. But of course, all of that is out the window now. As Yoda once said, “You must unlearn what you have learned.” This is now the official account of events. So… just forget anything you may have heard about “Kyle Katarn”.

Before talking about this book, we first need to briefly discuss a few details about the upcoming film. Nothing spoilerish… but certain details made clear by the official trailers will be discussed below.

The Rogue One film focuses on a character named Jyn Erso, who is recruited by the Rebel Alliance to help uncover the details of a new weapon that is being developed by the Empire. She was selected because the Rebels have learned that the developer of the weapon is none other than her father, the brilliant scientist, Galen Erso. The trailer indicates a perilous mission will be undertaken by Jyn and a group of rebels to uncover and retrieve the details behind the new Empire’s new battle station. We also know from the trailer that the Death Star project is being overseen by an Imperial officer by the name of Orson Krennic.  But little of his story is revealed in the trailers themselves.

There’s a lot of hype surrounding the release of Rogue One. So, to go along with the new film, we naturally have a prequel book: Catalyst: A Rogue One Novel.

All I knew going into this book was that it was going to set up the events leading up the story told in Rogue One, but I had no idea just what that entail. Well, this book starts off by introducing the character of Galen Erso. In fact, the book mainly focuses on this character. It starts during the events of the Clone Wars  and extends several years into the reign of the Empire. In this novel, we learn who Galen is – his philosophies and loyalties. It is immediately clear that Galen is a good man. Not someone we would expect developing weapons for the Empire.

The book also pays a lot of attention to the character of Orson Krennic. It provides background into this character; his rise to power within the ranks of the Empire as well as his friendship to Galen. Fans wondering how someone as good-natured as Galen might end up contributing to a weapon as horrific as the Death Star will be able to see exactly how this scenario is played out. The relationship between Krennic and Galen provides quite a bit of insight here. I’m curious to see how much of this will be seen on the screen.

Having read this book, I certainly feel that I already know quite a bit about some of the characters we are going to see in Rogue One. But, it’s obvious that there’s plenty more going to be introduced in the film that’s not covered here. I suspect that fans who read this book will certainly benefit from the background information, but I do not feel that is required reading for the upcoming movie.

All in all, I found the contents of this novel to provide a lot of interesting detail, but to be overall a bit dry and slow-paced from time to time. Fans clamoring to connect the dots between clues seen in the prequel trilogy and the original film will be pleased.

Story: Detailed and interesting. But as mentioned above, a little slow a times. Keep in mind his novel is intended to provide backstory and set up for events in an upcoming movie. Despite being a prequel, it may very well end up being a better read once you’ve viewed the actual film. We shall see.

Recommended:  For older, legacy fans of Star Wars – or Rogue One specific followers.